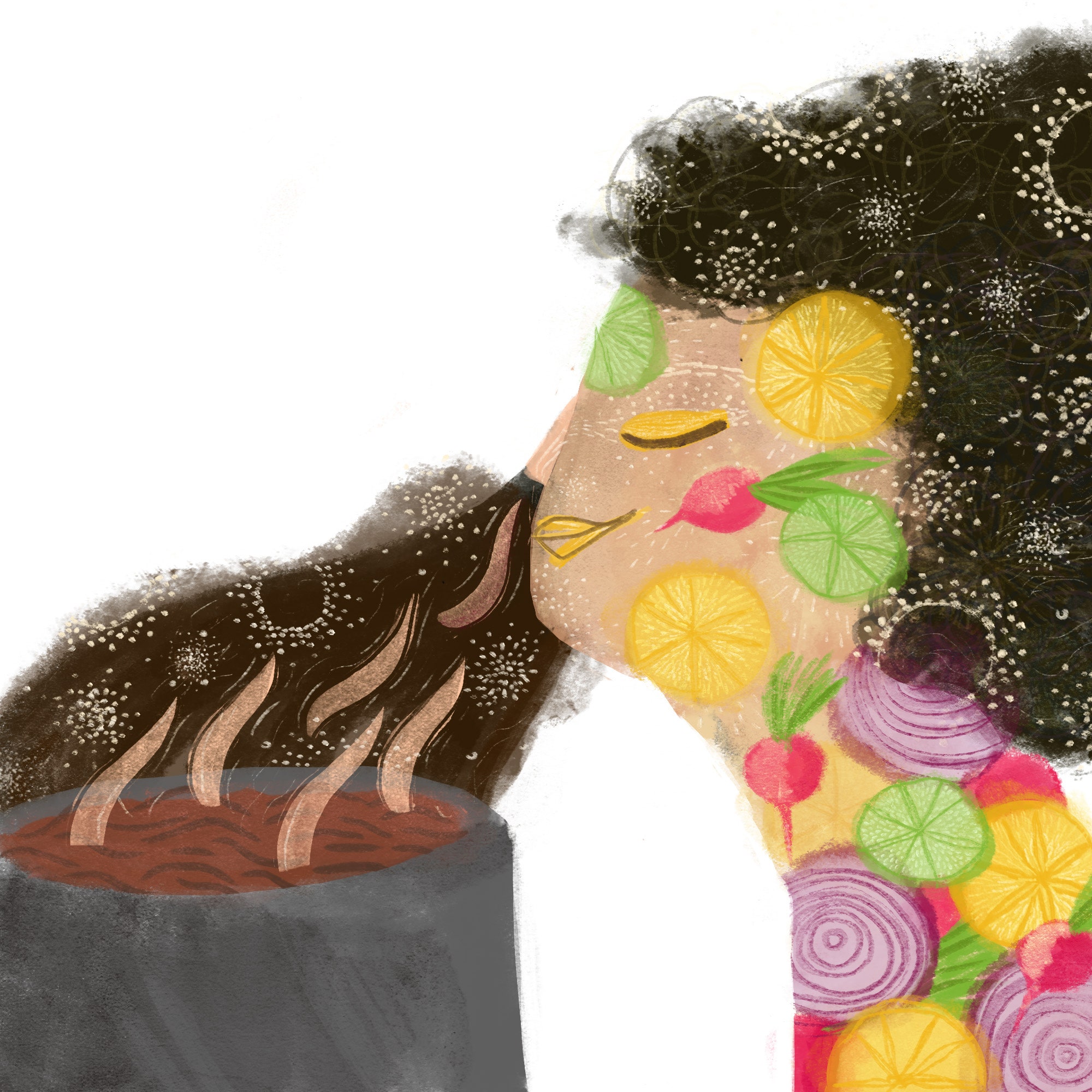 A head fog was followed by a depression that felt like I was walking around with weights strapped to both my legs. The weight settled into my bones, and I would often leave class to sit in a bathroom stall and stare at the walls. I felt like a tourist in my own life. I wondered if everyone around me was real.

Come 2017, I felt slightly better emotionally, but the New Year greeted me with a sore tailbone. Days later, I hobbled onto a train, got off in Manhattan, and hobbled into an emergency room. Fluid was trapped under my skin, so I got around sixteen injections, gripped a med student’s hand, and a doctor sliced me open.

The next few weeks went off without a hitch. But then I caught my first cold of 2017. It was uneventful. I blew boogers into some tissues and took naps. The next one was bad. It was February and cold, and I had an annoying sore throat for over a week. I almost cleared out a dollar store’s cough-drops section. I joked on social media that someone had placed a mal de ojo on me and that I needed a gold-eye necklace and a bunch of bodega saint candles to protect me.

Another cold came, and I shared witty bilingual memes on Facebook about Vicks vapor rub, aka Vi-Vaporu, and lighting Jesus candles in hopes of ridding myself of this “evil.”

The next one hit me in late March. It felt all kinds of wrong. I walked to the pharmacy that night and had to stop to lean on a gate. On the way back home, I sat down at the curb and tried to breathe. A delivery guy stopped and asked me if I was all right. I said yes and kept walking home. I made it halfway up the stairs to the second floor of my house and lay down for a few minutes. My dad asked if I needed help getting up the stairs. I told him no and just waited to stop feeling dizzy for a little bit. I eventually got up and stumbled into my room.

My mom reminded me that I used to catch horrendous colds as a kid. I remembered weeks of coughs that left me listless and sore. My grandmother would nag her about why she had raised us up here in el frío. She used to think the cold in New York was unnatural and always made me wear even more shirts than my mom did.

“Mamá saved you once,” my mom told me. “You had this cold that didn’t leave. I had to go out in the snow into Bushwick, where this Puerto Rican lady sold these herbs. I gave you the oil from it, and you got better.”

I don’t remember that. I do remember someone putting leaves on my chest at one point and having me inhale the steam from smelly water when I was in elementary school. I remember my dad soaking a lime wedge in warm rum, tea, and honey and making me suck on it. He said it helped his colds as a kid and that he was trying to numb my throat with that and those pharmacy sprays so I could actually finish a meal.

My grandmother used to claim that she’s the reason I’m alive. Maybe she’s right. She did give us Dominican cough syrups that are hard to find here. I’m not sure if they’re legal here, because the ones my aunt brings over when she visits don’t have ingredients on the label, but they work. Better-known ones that for sale in the United States have ingredients like honey, eucalyptus oil, and propylparaben … whatever the hell that is. She always reminded me of the time I coughed so much I was turning pale. And of the time I had a high fever and only she brought it back down. Before she died, I used to joke with her that I’d compile her remedies and bedtime stories into a novel.

The rest of 2017 was filled with stomach pains, chest pains, headaches, and a weird bout of forgetfulness that scared me. I texted my boyfriend in April to ask what we did in February. I made careless errors in my work. I forgot to respond to emails. I’d try to get started on a freelance assignment and then end up randomly napping on the floor, on my bed, or at my desk in my room. The fatigue was like an ugly sweater I couldn’t take off. I got another bad cold and days of headaches in May after getting my hospital bill for January.

“I think my immune system gave up,” I told my mom.

“No, it’s ’cause you’re always on your damn phone,” she said. “And because you walk around the house barefoot, ponte tus medias.”

I started documenting all of her reasons why I was sick on my personal Facebook. My favorite one was that electronics gave out wave thingies that hurt people. I tried to explain to her that it wasn’t how laptops worked. Friends who also happen to be Caribbean and/or Latino have sometimes sided with her. Some have suggested teas; others have asked if I put the Vicks vapor rub on my chest, and back, and forehead, and nose, and stomach.

I would have preferred a real mal de ojo to being that sick. I spent a lot of my free time at home in my room. I was lonely. And I was tired of using what little money I had on cough drops. November rolled around. I woke up one morning with the worst throat ache I’d ever had. I could hardly swallow my own spit. I tried coughing to see if it would clear out my throat. I felt like I had swallowed a fish bone.

My mother had had enough. She’d quietly put up with seeing me drink name-brand syrups while rejecting her bottles of aceite de bacalao and bitter teas. I remember sitting on the counter of the apartment I grew up in and crying the moment she took the bottle out of the fridge. Cod-liver oil is disgusting. It was worst when it was lumpy and cold and stuck to the back of my tongue with its fishy sludge taste.

“Bébetelo,” my mom would say, grilling me if she suspected that I was going to spit it out.

This time was slightly different though. I was ready to drink everything and anything to get rid of whatever was making me so sick. She told me to make a list on a Post-it: garlic, limes, lemon, organic honey, ginger, red onions, radishes, and achiote.

I went to one of the large Italian grocers in my neighborhood that stocks everything from Middle Eastern snacks to dark chocolates with Polish labels. When I paid for my ingredients, the lady at the register asked me if a cat had my tongue. I pointed to my throat. She nodded sympathetically.

I got home, and there was a huge glass jar on the counter. I started chopping. My mom hovered in her usual way and complained that I was doing it all wrong; I couldn’t answer back without feeling like my throat was being scrubbed from the inside, so I just chopped even smaller. I filled the jar with the onions, ginger, radishes, and garlic and poured an entire package of achiote on top. I squeezed in over six lemons and limes and then emptied the bottle of honey. My mom poured the hot water in, mixed, and covered the jar.

An hour later, I stirred with a spoon, fished out a radish slice, and ate it. I chugged the murky red water straight from the jar, and it was easier to breathe. It tasted like medicinal, lemony dirt. My mother would sometimes give it to me room temperature, or hand it over in a steaming mug. In a few days, my sore throat was gone. I coughed up chunks of stuff that rattled around inside me, and my chest pains were gone.

I asked her if she was a witch. She crossed herself and told me to stop talking like that. But I still low-key think she and my grandmother are brujas, but in a Catholic sort of way. Her remedies have gotten rid of my last three colds in record time. Anytime I feel pressure in my chest, I reach for her murky jar waters and eat the contents like a side dish. I’ve learned to like the thinly sliced onions and ginger pickled in honey and lime and salt.

Like my mom says, it’s probably the reason why I’m still here, in a functional kind of way.

*Angely Mercado is a part-time troglodyte who is trying to get her life together and whose work has appeared on The Fix, NPR, Hello Giggles, and more. Follow her on Twitter: @AngelyMercado.*