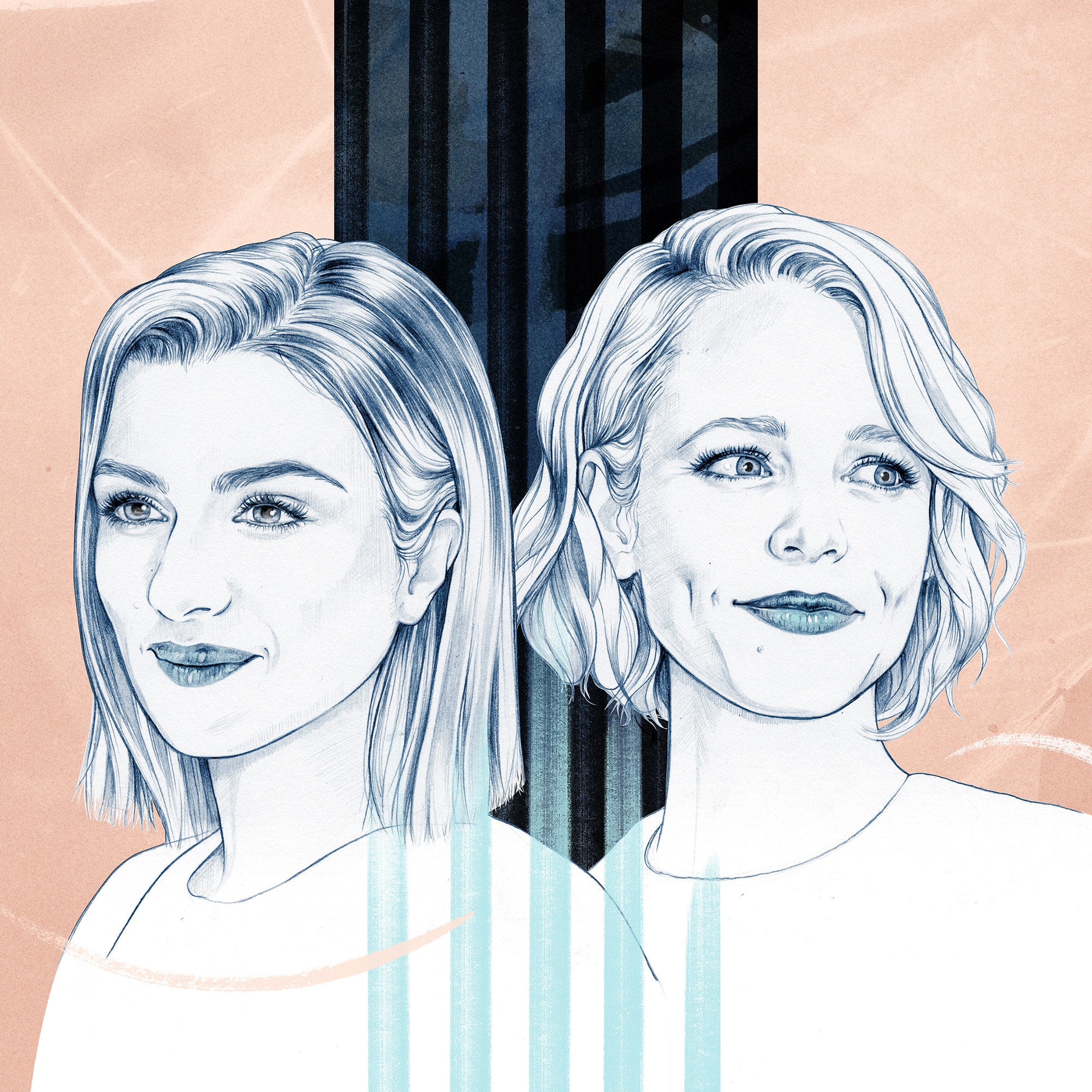 *Disobedience* is a film based on the novel by Naomi Alderman, a book I optioned just over three years ago and had the great joy of bringing to the screen under the expert direction of Sebastián Lelio. I play Ronit, a woman who was banished as a girl from her North London Orthodox Jewish community by her father, the rabbi, when he discovers that his daughter and her childhood best friend, Esti (played by Rachel McAdams), are lovers. The film begins some years later in New York City, where the now-very-secular Ronit is enjoying her freedom. She is told of her father’s death and returns to North London for the funeral to find that Esti has married her father’s favorite pupil and heir apparent, Dovid (played by Alessandro Nivola). The film — the first English-language movie directed by Lelio, who is Chilean — takes place over the seven days of mourning that lead to the memorial for her father. In this time, Esti and Ronit time travel back to their adolescence and rekindle their love. Trouble ensues, Dovid and Esti’s marriage is left reeling, and their community is, too.

Esti is a gay woman trying to reconcile her deep religious faith with her sexual identity. This is the story of a love that is forbidden by certain societies, a story of being a misfit, and a journey toward self-realization. Lelio’s past two films, *Gloria* and *A Fantastic Woman* (which just won the Oscar for best foreign film), place characters who are mostly in the margins of storytelling front and center. In *Gloria*, he explores the sexual desires and escapades of a 58-year-old female divorcée. In *Fantastic Woman*, the film follows a trans woman who struggles to be allowed to love the man of her choice. And in *Disobedience*, two gay women try to find a way to love each other freely.

Rachel McAdams was the first actress to read the script, and we were extremely lucky, as she immediately felt she wanted to play Esti and understood her. We had met and worked briefly for a day when I played a role in a Terrence Malick film she was starring in, but we didn’t get to chat in any depth. I was an admirer of her work, her range and subtlety, her terrific honesty and truthfulness, and of course the radiance she emanates on screen. It turned out that we work in a similar way. We both do our preparation privately in advance of shooting, eschewing on-set analysis and debate for just running on our instincts and getting lost in the story between action and cut. Chemistry isn’t a thing you can fabricate — it’s either there or it isn’t. With Rachel, I found an immediate sense of trust, an openness, and a vulnerability. She has great inner strength and conviction and a moral tenacity. I loved collaborating with her and hope we get to do it again. She was very easy to fall in love with, and I think her Esti is a marvel.

Here is a chat we had on the phone the other day.

**Rachel Weisz:** When we first spoke, you had such a powerful reaction to the film. It just spoke to you. Sometimes maybe that’s not explainable, why a story hits a person so hard. But when I met you, you were Esti. It wasn’t like you had prosthetics: I mean, your face was scrubbed, and you had what you thought was a bad wig. I thought you looked hot. You just transformed; you changed your DNA. What was it in Esti that you knew who she was?

**Rachel McAdams:** Sometimes something just jumps inside of you when you read a script, and it starts to live in you somewhere. It’s like falling in love — it just happens and you don’t know why exactly, at least initially. And then you start to pick it apart and find something concrete to hang on to and explore. I instantly felt connected to Esti, and my heart bled for her. It was very easy to get wrapped up in this journey she was on, but for all the characters too.

I remember you asking me that: Do you connect to Esti? And then I thought: I kind of connected to all the characters, and that’s so rare, that all three characters — yours, mine, and Alessandro’s — were so rich and had this amazing arc. That really struck me.

**RW:** Our characters are like two halves of the same person. My character is the one that left, yours is the one that stayed. It made me think that we’re almost sort of bound together in some ways.

I’m always spending time with men in fictions, so for me it was just really unusual and lovely. As a woman, you’re often the object of the man’s desire, or he’s the object of yours, but I felt like there was something just so different about the female gaze.

**RM:** Energetically, it was very different. We had great communication, and there was a very vulnerable, open, gentle, intelligent feeling to everything.

We talked about the safety of it as well, doing a love scene. That was a very different love scene than I’ve ever done before, and it was the most kind of raw and vulnerable love-making scene I’ve ever done. And yet at the same time, I felt incredibly safe and cared for and free to explore.

**RW:** I agree. I’d never done a sex scene where I felt like it told a story. It was about your character’s release in that incredible orgasm. It was sex, but it was also freedom. Maybe I’m reading too much into it, but it just felt like it had so much meaning. It was so emotional and so vulnerable. And there was much less stubble, I’ve got to say.

**RM:** Yeah, you’re right . It was such a huge plot point. So often with sex scenes, you’re asking yourself: *Is this scene gratuitous, or does it belong here?* It never feels like a pivotal plot point that brings the characters to the next phase of their life or helps them to make a huge decision about the path that their life will take. I’ve never come across that before.

**RM:** Sebastián had his finger on that the whole time. The scene was a real dance to him. He had choreographed it, and we talked about it a lot.

**RW:** He storyboarded it. We can’t claim that we thought up all the spitting and the moisture. He wasn’t interested in seeing breasts and bottoms and nipples — it was about our faces full of emotion and then the mystery outside the frame.

**RM:** It is interesting to be fully clothed and feel that vulnerable. I do think that was an interesting juxtaposition. Alessandro and I did a love scene where we were much more physically stripped down, and yet it was very closed off for our characters.

**RW:** I’ve met people who interpret your love scene with Alessandro in different ways. Some people see you having real pleasure, and some people said to me, “Oh, no, no, she’s just pretending.” It’s such a mysterious performance.

**RM:** I remember Sebastián saying, “Oh, maybe fake an orgasm.” I think he was not going for comedy, but it almost got to be like dark comedy a little bit. I was a little worried about that. I thought: *Oh, are we going too far with it?* I like that he was pushing those boundaries.

We were also exploring the fact that Esti and Dovid do have a good marriage, and she wants to be able to give herself over to him. It would make life a lot easier if she could just let go and be in this relationship that is very good and positive and loving.

**RW:** I genuinely believe Esti’s spirituality — that she really believes in God but she can’t align her Orthodoxy with her sexuality. How did you make me believe that you believe so strongly in God and this religion?

**RM:** I guess it was through research, because I didn’t have a lot of experience with the Orthodox community or Jewish religion to that extent. It was in the learning that I realized how much that was a part of who Esti was. She wasn’t willing to give religion up; that never really even occurred to her.

I think it was just in learning about the religion and how much it meant to her — it was her whole life, her community, her marriage. She loved these girls that she teaches. She believed that she could maybe offer them something more, that maybe she had a purpose to teach, and to teach a little bit more openness. But you have to make a choice at some point; you can’t straddle the line.

That’s the greatest choice she ever has to make in her life, is between her religion and who she is, which are linked. It was very confusing. As I’m talking about it, I’m still confused. I think everyone can relate to that in a way: The world doesn’t always embrace what you are — you have to try to slot yourself in somewhere. There’s a lot of pain and confusion that comes up in that.

**RW:** It’s just so beautiful the way you explained the identity of her community, of being a teacher, of being a wife, of being a religious Jew in this community. And then there’s her sexuality, which this world won’t allow. The disobedience that she found to leave is the heart of the film. Do you think disobedience can be a good thing in the right place?

**RM:** I think it’s an interesting word, because it’s been labeled with this negativity. I think it’s so imperative to our growth that we ask questions of that label. I love that Esti comes to that conclusion: she almost has to find a loophole in her religion to get her out, to help her to have both, so that she can still believe in her religion, that God gives her the right to be who she is.

She comes to the conclusion that free will is just as much a part of her religion as anything else. I just think that’s so profound, that she could somehow hold both at the same time and it didn’t make her wrong. It actually made her very right.

*Rachel McAdams is an Academy-Award nominated actress and can next be seen in* Disobedience.