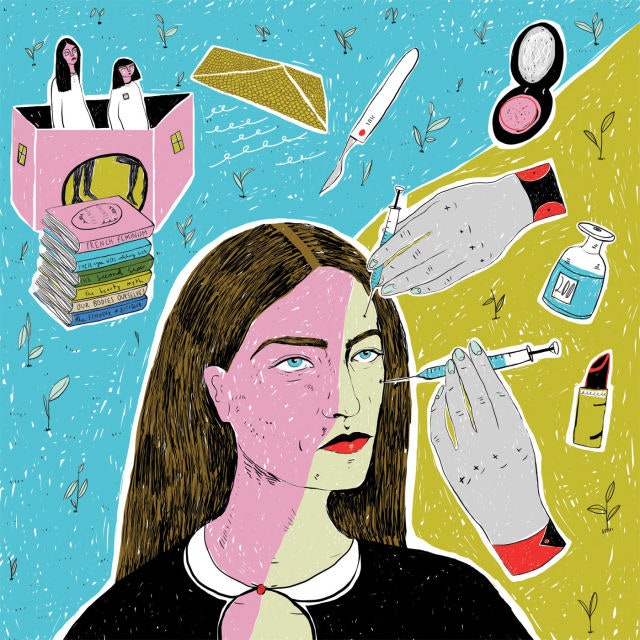 My two young daughters are growing up smack in the heart of America’s youth-obsessed beauty culture. They think watching me spend hours in hair and makeup is normal, and that it’s an integral part of my “work.” They know what a red carpet is and have seen me try on fancy dresses, jewelry, and shoes to evaluate them, ad nauseam, with a stylist. They’re learning that, in my chosen field, employability is based on looks.

Their aunt, my sister, chose a very different path. She’s a doctor and teaches in a medical school. As soon as she got her premature gray hair, at 33, she embraced it, and actually saw it as a blessing — she looked so young without it that nobody believed she was a doctor. Apparently, if I were the associate dean of clinical education, director of medicine clerkship, and associate professor of clinical medicine at a major urban hospital, it would be an asset, or at the very least a nonevent, for me to have gray hair.

But I’m an actress.

It’s painfully obvious, but I’m still ashamed to admit this: I care about my looks. How else can I explain my trainer, stylist, and Barney’s card? I’ve bleached my teeth, dyed my hair, peeled and lasered my face, and tried a slew of age-defying creams. More than once, I’ve asked the director of photography on a show to soften my laugh lines. Nothing about this suggests I’m aging gracefully.

> It’s painfully obvious, but I’m still ashamed to admit this: I care about my looks.

Yet for me, it would be crossing the Rubicon to add Botox and fillers into the mix. I want to look younger (and better), trust me. The only reason I don’t do it is because I’m scared.

I’m afraid one visit to a cosmetic dermatologist would be my gateway drug. I’d go in for a tiny, circumscribed lift and come out looking like a blowfish. Or someone whose face is permanently pressed up against a glass window. Or like I’m standing in the jet stream of a 747. What’s the point of doing it if everyone can tell? I want the thing that makes me look younger, not the thing that makes me look like I did the thing.

I’m not happy about my saggy boobs, which, left to their own devices, resemble my grandmother’s bingo wings. But I’m afraid that if I got a surgical lift, there would be some complication from the procedure, like septic shock. I’d be punished for being an ingrate about having made it this far in one (wrinkly) piece. My daughters would someday learn that the real reason I died was because I voluntarily checked myself into a hospital to get an elective operation that I didn’t need so that I could look slightly more attractive to the three people who were paying close enough attention to notice (my husband, my gay agent, and the nice man who sends me notes from prison).

Another frightening scenario is that one or both of my daughters will do as I did in my youth: go to college, take Feminist Texts and Theory, and stop shaving their legs and armpits. As hard-core feminists, they’ll write me off. I’ll cry, *Why aren’t you coming home for Thanksgiving?* And they’ll be like, *You’re nothing but a foot soldier for the beauty industrial complex.* Letting my face age naturally will be my ace in the hole. My counterclaim. Proof that I didn’t pander to the male gaze.

> Letting my face age naturally will be my ace in the hole. My counterclaim. Proof that I didn’t pander to the male gaze.

Sure, they’ll still be able to write essays about the rampant misogyny in movies I starred in, like *Saving Silverman* and *Whipped*. My daughter Molly will recall how, for a Mother’s Day project, she told her teachers that I enjoy “eating salad, drinking wine, and doing computer” (i.e., online shopping). My daughter Frankie will tell her therapist how I missed her Eleanor Roosevelt presentation to promote myself on *Watch What Happens Live*. But at least I didn’t do Botox!

The truth is I have no business getting on a soapbox in front of my daughters or anyone else.

My sister, however, has every right to get on a soapbox. Plastic surgery and anti-aging products are multi-billion-dollar industries in this country, and she’s contributed nothing to them. She doesn’t follow celebrities or fashion — not out of protest but due to a lack of interest. She thinks shopping is boring, never wears makeup, and doesn’t own high heels. She has about four pairs of shoes, and they’re all vaguely orthopedic.

She could go on a tirade about how cosmetic surgery is a waste of precious medical resources; how our cultural obsession with beauty and self-improvement is compounded by the fact that we’re living in the Age of Digital Narcissism; and how, because of this phenomenon, girls as young as nine — the age of her only daughter and my eldest — show a “disturbing level of anxiety” about their looks. She could write about all of this and it wouldn’t sound patronizing or hypocritical. But she doesn’t have time.

I do. Since my show got canceled, I have plenty of time to talk about what it feels like to be bombarded with wrinkles and, at the exact same time, try to remain gainfully employed as an actress. Or employed in any way, shape, or form as an actress.

Recently, I was told I was ineligible for a movie because I wasn’t “current” enough. I’m constantly pushed out by younger talent, like Alicia Vikander. You might think, *Wait, she’s 27 and a gorgeous movie star, and you’re 44 and a low-tier, TV-mom-type; you’re not in the same ballpark*. But she is squeezing me out. She’s in the hot center and I’m on the remote perimeter. The train has left the station and I’m one of those moronic stragglers running alongside with her purse caught in the door. Everyone’s looking at me like, *Let go, you bullheaded old hag!* There’s no room for you.

> Recently, I was told I was ineligible for a movie because I wasn’t “current” enough.

I worry a lot about dying. I speculate about what’s going to get me. Cancer, heart attack, MS? Parkinson’s, like my mom and grandfather?

When I was scratching Frankie’s back at bedtime the other night, I thought she was asleep, but then, out of nowhere, she said, “I’m scared that because you have so many wrinkles it means you’re going to die soon.”

Yep, that makes two of us.

If he’s up there, God must think it’s absurd to see us in this mad scramble to become ageless. I know it’s magical thinking, but I have a theory: if I resist the urge to sweep old age under the rug, if I don’t try to clamp it down, I’ll be rewarded with longevity.

Since we’re all going to get wrinkly and die, maybe we’ve got to move in the direction of acceptance about that. It’s like what they teach you in driving school: if your car skids, turn the wheels right into it. It’s counterintuitive, but don’t fight the slide.

> Since we’re all going to get wrinkly and die, maybe we’ve got to move in the direction of acceptance about that.

Botox or no Botox, we shouldn’t feel bitter, because we’re ALL going to look like shit. Every last one of us. Even Alicia Vikander. (Sorry, Alicia.) And the up-and-comer who’s on deck after her, and so on and so forth until the end of time.

A couple of years ago, Frankie’s teachers asked if any parents would like to talk to the class about their jobs. It just so happened this coincided with a medical conference my sister was attending in L.A. I invited her to come, and she asked why I wasn’t going myself. She had a point, but at the same time, I’ve spent my adult life courting the limelight — and something in me balked at doing so in front of a bunch of first graders.

It was my great pleasure to watch Frankie introduce my sister. She stood in front of all the kids and explained that part of her job is to treat patients in the hospital and part of her job is to teach students how to become doctors. After each rotation, she makes sure they have a handle on the factual material but also that they can perform under pressure in a clinical setting, with real patients.

Sometimes, her students don’t have a lot of insight about what specialty is the best fit for them. Instead, they’re driven by what their parents want, or by what they see glorified on TV. My sister makes sure they aren’t getting seduced by the titles or prestige or any other superficial motivations, and that they’re paying attention to what really matters.

I stood in the back of the room with the first-grade teachers, proud of my sister, a dazzling class act in her Easy Spirit clogs.

*Amanda Peet is an actress who most recently starred on* Togetherness *and wrote a play called* The Commons of Pensacola.