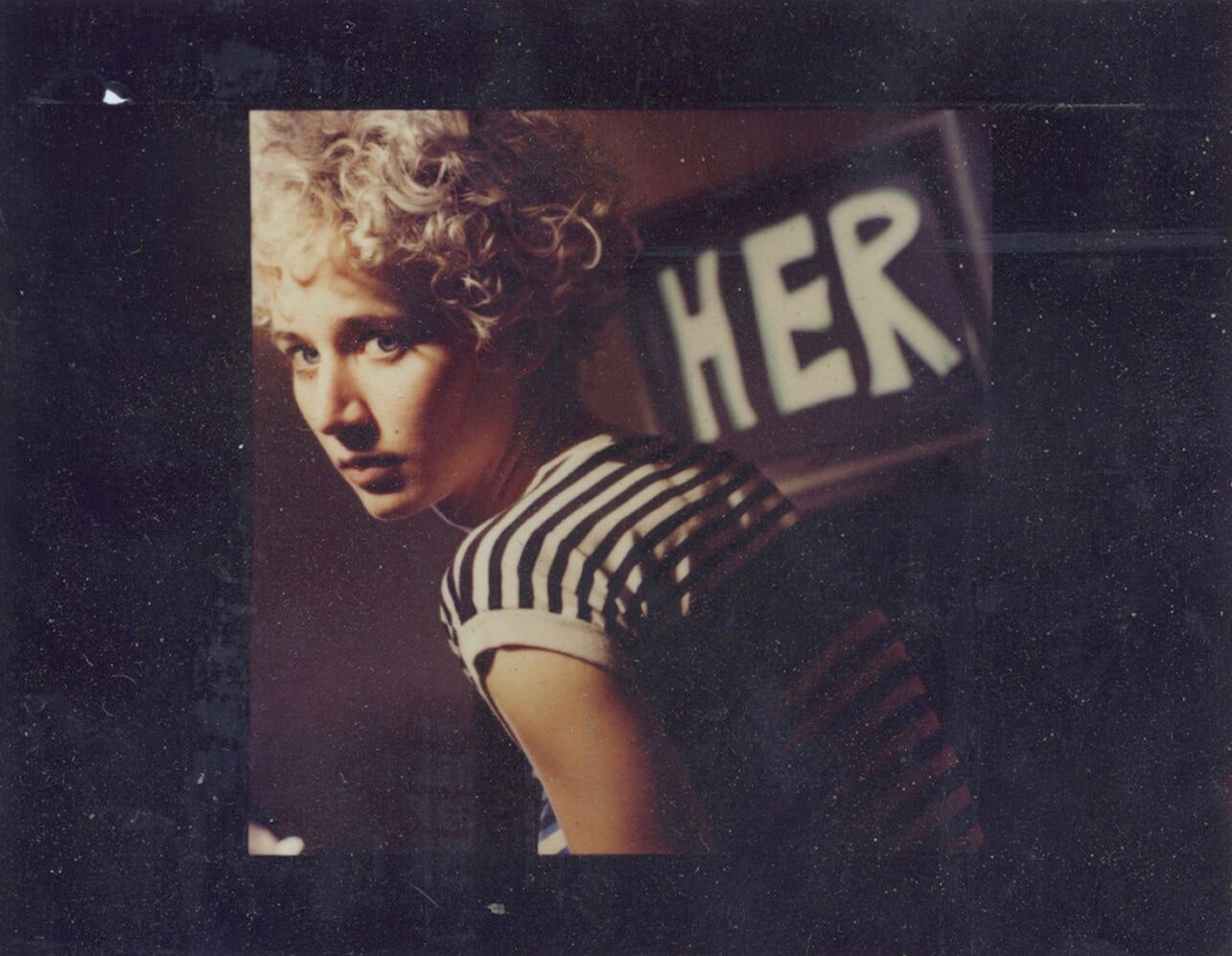 *In 1995, at the age of 21, Miranda July started an underground movie-sharing network for women filmmakers. Joanie 4 Jackie (formerly Big Miss Moviola) thrived for more than a decade and connected hundreds of women, including Sarah Gertrude Shapiro (creator of* Unreal), *artist K8 Hardy, and* Essence *advice columnist/empowerment coach Abiola Abrams. In January, the Getty Research Institute acquired the Joanie 4 Jackie archive. You can see everything at (1), a complete digital record of the project.*

_In honor of this historic preservation of feminist history, Miranda is here to reminisce about being young, punk, and on fire._

I remember exactly where I was when I typed up the first pamphlet. It was freezing cold in our all-girl Portland punk house, and I was crouched on the floor over a shared computer.

“A CHALLENGE AND PROMISE,” I tapped out. “Lady, you send me your movie + $5, and I’ll send you the latest Big Miss Moviola Chainletter Tape. That’s ten lady-made movies, including yours.”

I had just dropped out of UC Santa Cruz and moved to Portland to live with a girl who was currently in the basement playing guitar and being uncommunicative and problematically sexy. I was all revved up by Bikini Kill, Kill Rock Stars, K Records, Heavens 2 Betsy, and the do-it-yourself Riot Grrl revolution. But I often found myself crying; I was filled with feeling but generally paralyzed. I wanted to make movies, but this seemed like an impossible challenge. So I challenged other girls instead. I typed with a pounding heart:

“Mainstream movies are sometimes moving or scary, but on the whole they, in my opinion, do not inspire women to inspire women to go: I can do that. That is because the movies are usually **womenhating** … they have nothing to do with the kinds of things women talk to each other about.”

I wanted a revolution. I wanted girls and women to make movies that were only for each other; Hollywood was not allowed to see them. I didn’t care about “talent” — I promised to include every single movie sent to my P.O. box. Who was I to say what was good? The arbiters of excellence had always been men, so maybe “excellence” was irrelevant here. Maybe you made it bad on purpose. Maybe bad is good.

I put stacks of the pamphlets all over town, the library, the grocery story, the high school. I walked to the post office every day; no tapes. By now I had broken up with the uncommunicative/sexy girlfriend. I was the most alone I’d ever been. I gave boxes of pamphlets to friends in Bikini Kill and Team Dresch, hoping they would get handed out on tour. I relentlessly wrote _Sassy_ and _Seventeen_ , letting them know about the uprising. This world had to exist; I really needed it. My day jobs were getting progressively worse — from waitressing, to stripping, to wearing a cow costume while carrying a sign for Halloween Warehouse. I was placing all bets on my own voice, my ability to send a cry into the night that other women would respond to

Then one day, about six months later, there was a package waiting for me at the post office. The movie was called _Not Just a Sidekick_, by a girl named Jendria Godlewski. It was tremendously violent and bloody because the filmmaker’s personal interest was special effects. Tears of relief rolled down my face as I kneeled in front of my TV. There was life on Earth. I was saved.

_”I am one girl in Portland Oregon who has compiled all of these documents, girl’s movies, so that I can wake up in the morning and feel like Earth is this place that has to do with me and you. The real you, the woman that is stranger and cooler and smarter and sexier and sadder and more caring than any woman on TV, and you are even a little better than you pretend to be because no one’s ever demanding your best. I mean com’on, you think anyone’s going to notice if you don’t live up to your own high standards?_

_BIG MISS MOVIOLA WILL NOTICE. HER JOB IS TO NOTICE WHAT IS MISSING. SHE ONLY SEES THE GHOSTS OF ALL THE GIRL’S MOVIES THAT WERE NEVER MADE BECAUSE NO ONE DEMANDED THEM. This is the place where you and I demand to see the missing movies._

One by one, slowly and from all over the country, nine more tapes arrived. A movie about a sixteen-year-old with a tubal pregnancy. A movie about having a crush on Amy Carter. A movie about tits. I called that first Chainletter tape _The Velvet Chainletter_ (after the Velvet Underground). I sent the compilation of ten movies back to the contributors, along with a booklet in which I tried to explain moviemaking, as I understood it:

“There’s two variables on the video camera. There’s the lens: The eye. This is the same eye that’s watching you all the time anyways if you’re a woman. Especially in public, but even when you’re alone in your room. The eye is programmed into your brain. When you are making a movie you stop pretending that you aren’t aware of the eye. THEY ARE LOOKING AT YOUR ASS NO MATTER WHAT YOU WEAR. You stop pretending that you are innocent and unaffected by the eye. You turn and face it: the camera. You look into its eye and see yourself and you say: “I see you watching me.” I know you are there and I’m not embarrassed to admit it. I admit the role I play every day in this movie made not by me. I’m not embarrassed because just surviving being watched every day has trained me to be an expert on the eye.”

I muscled my way into not just _Sassy_ and _Seventeen_, but _Interview_ and _Filmmaker,_ writing them letters that always exaggerated the number of movies I’d received. I wasn’t selling anything; I was trying to spread the call to action and my address. Letters came from girls all over the country … I wasn’t the only one with big plans.

_The Umatic Chainletter_ (1997), _The Cherry Cherry Chainletter_ (1998), _The Break My Chainletter_ (1999): it was happening. Because YouTube hadn’t been invented, I traveled around the country with a video projector, showing the movies at high schools and colleges and punk clubs. At each screening I tried to coax the audience into the medium by inviting them to stand alone in a closet with the video camera and finish the sentence “Nobody ever told me …” At the end of the screening, I played the movie we had made together.

Of course I began to make my own movies; how could I not have? Surrounded by so much boldness, it was easy. I made a short movie called _Atlanta,_ about a twelve-year-old Olympic swimmer and her mother (on _The Underwater Chainletter,_ 1997) and one called _The Amateurist,_ about a woman whose job is to watch another woman (on _Joanie 4 Jackie 4Ever,_ 1998).

After making six short movies and compiling and sharing almost 200 movies made by other women, it felt natural to attempt something longer. I gave Joanie 4 Jackie to Bard College so I could focus on my first feature-length film. A group of students, with their professor, Jacqueline Goss, continued the project for a few years, making four more Chainletter compilations. And then, as cell-phone video and YouTube shifted the landscape, Joanie 4 Jackie began the surprisingly fast process of sinking into the past, first obscured and then entirely forgotten.

When my first feature film, _Me and You and Everyone We Know,_ premiered at the Sundance Film Festival in 2005, it was one of two movies made by women, out of sixteen in competition. I was, frankly, startled. I thought I had solved that problem years ago. I traveled the world promoting _Me and You,_ and every interviewer asked, “Where did you come from?” I couldn’t be from Earth, because only men made movies there. I had an answer, but it was too long, and it sounded like a lie, a fantasy. I wished desperately that I had proof of Joanie 4 Jackie, but it was just some boxes in a supply closet at Bard College.

A couple of years a later, in 2009, a student walked into that closet and said, “What’s all this?” Vanessa Haroutunian decided to make Joanie 4 Jackie her senior thesis; she made a documentary about the project and then began unpacking and organizing the tapes and pamphlets, with a group of students. With their help, I began making a website and realized that the Joanie 4 Jackie archives were worth archiving properly — history is only what’s documented and preserved by those in power, usually men, but in this case: me.

And now: me and the Getty Research Institute. In January, the GRI officially acquired the complete Joanie 4 Jackie archives. Twenty-seven boxes of tapes, letters, posters, and embarrassing notes were sent from Bard to my studio, where a woman from the GRI quietly inventoried them before sending them across town to their state-of-the-art facilities. There they will be digitized and made available to researchers, alongside the archives of Yvonne Rainer, Harmony Hammond, the Guerilla Girls, and Robert Mapplethorpe, among others. You can browse the digitized materials right now, at the newly launched (2).

These archives exist only to give you ideas — about community-building, filmmaking, activism … and surviving heartbreak. The woman who starts the revolution is always the loneliest one, the one who has too many dark hours to fill and not much to lose. I started with a pamphlet. How did you start?

_Miranda July is a writer, artist, and filmmaker living in Los Angeles._