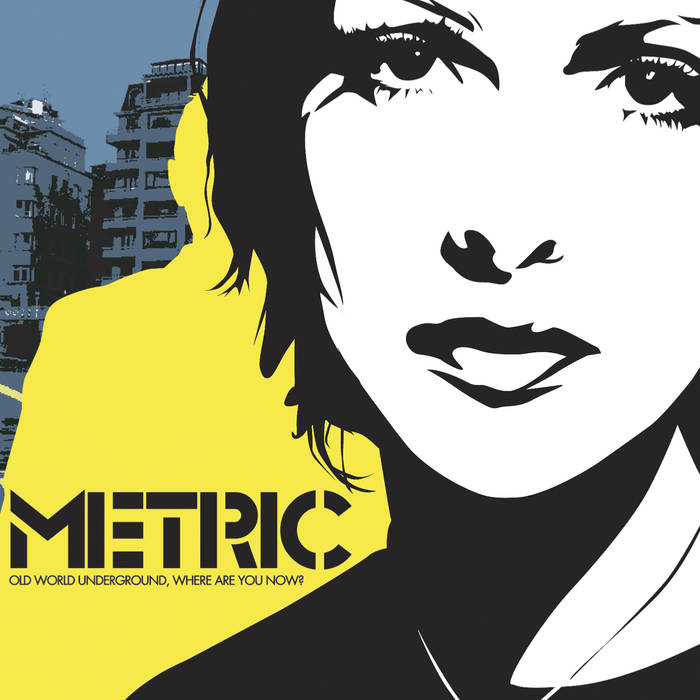 Metric’s “Combat Baby” is a dance song, a breakup song, a fight song, and a fuck you. It’s a song that has no patience for lethargy, ass-kissing, or pose. It’s a call to action and a cry in the dark.

My older sister Marta put “Combat Baby” on _Happy 14,_ a sweet and eclectic birthday mix that I know so well I can feel what song comes next before it starts playing. I listened to the Metric song on repeat on my pink and white stereo, the volume up just enough to feel loud but not loud enough to earn a knock on the door. Back then, a song found at the right moment became a philosophy for living, at least temporarily, at least until the CD started to skip so bad you couldn’t listen anymore. I’d lie on my bed or do the kind of frantic bedroom dance I’d seen older teens do in movies. I’d mouth “Combat baby come back” into the mirror like I was on camera. I was intoxicated by the mix of wistfulness and rebellion, by singer Emily Haines’s deadpan contempt as she intoned, “Ever since you have been gone it’s all caffeine-free / Faux-punk fatigues / Said it all before.” As a teen, I was ruthless about finding out what was authentic and what was trite or fake. I thought the way you showed someone respect was by going toe to toe with them until one of you forfeited the argument, out of exhaustion or anger. What was a friendship, a relationship, if not a battle of wills? “I want to be wrong but / No one here wants to fight me like you do,” Haines lamented. I lamented, too.

Back then I was also consumed by a kind of quick-start nostalgia that was activated by the smallest of experiences, so that even as I was living them out I was already mourning their loss. One afternoon I scaled the roof of Partyland with a boy I liked, and we watched the sky turn pink over the parking lots. But before the sun had even set, I was already tucked away in my room again, scribbling a few lines to immortalize the experience before dinnertime. What I didn’t know at fourteen was that _Old World Underground, Where Are You Now?,_ Metric’s first album, had been released less than six months after the U.S. went to war with Iraq in 2003. The album is overtly anti-war, and other singles like “IOU” feature lyrics such as “Ten-year-old enemy soldier / Our falling bombs are her shooting stars.” Metric also released (1) featuring string puppets of a politician and military man arguing on a fuzzy black and white TV, followed by images of tanks rolling in. “They try to kick it / Their feet fall asleep” is sung over the marching of an army of toy soldiers. The “Combat Baby” video feels dated today, and Haines dancing in night vision, a target on her hip and bombs exploding around her, seems better suited to a James Bond movie than anti-war commentary. I hadn’t seen the music video until I started writing this; before then I associated the song with my own private angst, my teenage desire to find someone to fight the world with me. It’s telling that it took until now for me to hear the political context of a song I once loved so privately, when the message not to turn off or tune out is more important than ever. Better to not go quietly.

I’m old enough now to get a toxic whiff from “Combat Baby,” to know that romanticizing a relationship based on conflict is kind of messed up, and also to know that a rock song must always be taken tongue in cheek. A part of me still craves the intensity of a round in the proverbial ring, the gloves-off, throw-down kind of arguments I would get into with my friends back then, the way we tested one another’s limits, took every feeling and idea and examined it under a blinding light. Yet I’ve also seen the limits of building relationships on intellectual battles of will. In college I spent hours crafting emails to smart boys about film theory, Eastern European history, and Allen Ginsberg’s poetry. I talked in bars until my voice went hoarse. I argued in seminar until the campus gates were locked and we had to shout to be let out. That kind of conversational combat is sometimes exciting but mostly exhausting. More important has been finding my own personal limits, not the ones set out for me by a particular conversation, by a particular dude who wants to get into it before last call. Sometimes I still find myself relating to people from that teenage place, quick to judge or romanticize their actions, and I have to remind myself how much bigger my world has gotten since then. There’s more than my own opinions to fight for, there’s more than validation to seek out, and there’s clarity in defining my own boundaries.

_Monika Zaleska is a writer, translator, and teacher. She is the fiction editor of_ The Brooklyn Review _and is currently at work on her first novel._