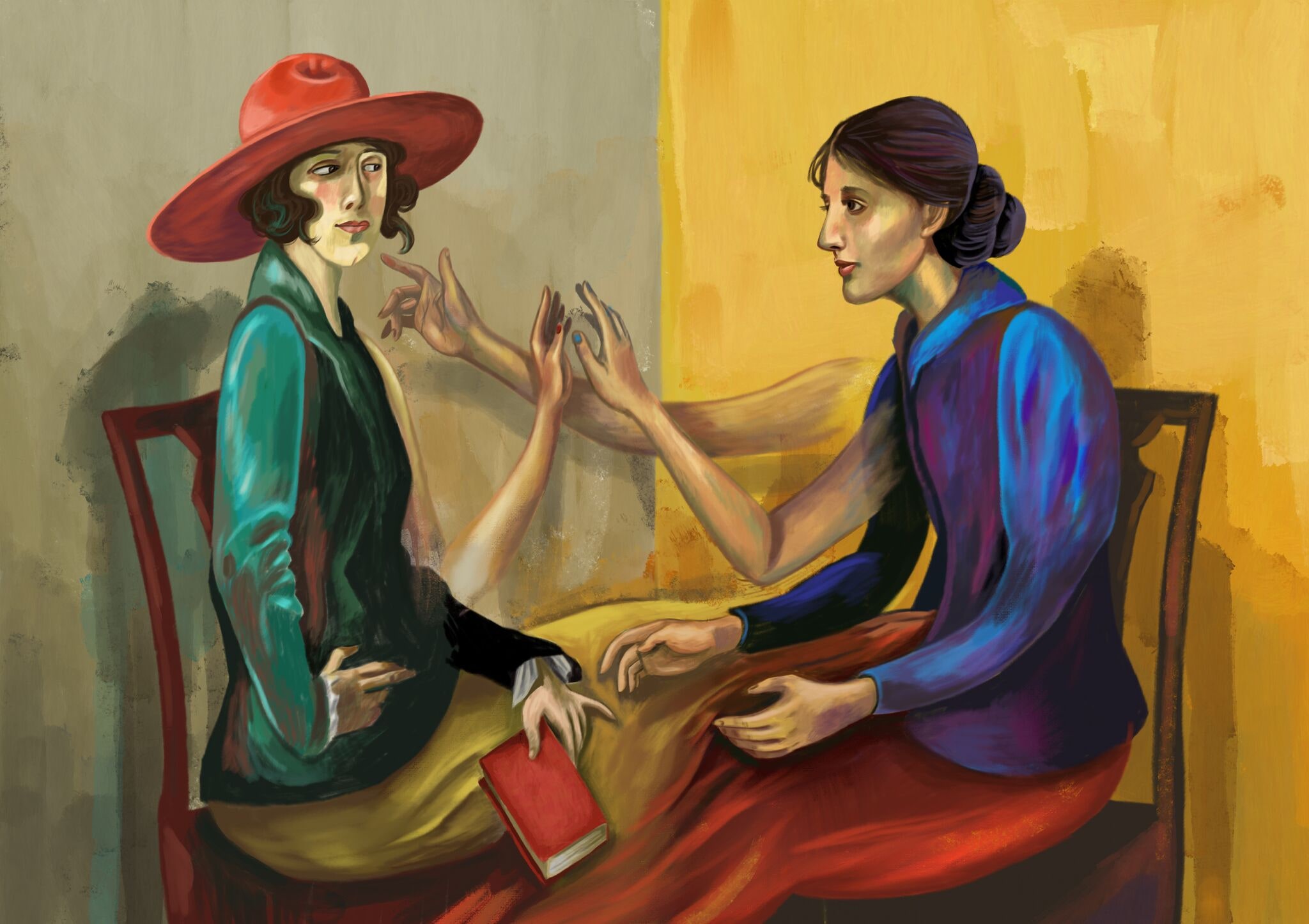 For Virginia Woolf, her fantastical biography (1) was an act of strength. _Orlando_ was inspired by Woolf’s long and intoxicating relationship with the mercurial poet and aristocrat Vita Sackville-West. Theirs was an emotionally hedonistic union that ran wild in the letters they exchanged from the moment they met in 1922, right up until Woolf’s death in 1941. At the pinnacle of their romance, words would both be the conduit for their love and consistently fail to express the ferocity of it. Vita wrote to Virginia in 1926:

“I am reduced to a thing that wants Virginia … I miss you, in a quite simple desperate human way. So, this is really just a squeal of pain.”

Woolf’s literary reputation remains haunted by the specter of the emotional and psychological challenges she faced, challenges that eventually resulted in her suicide. For someone who wrote so vividly about what it means to be alive, I have always felt it something of a betrayal that her death has become a defining part of her identity. This is why the work that Vita inspired stands out for me as a profound triumph. From the moment she dipped her pen in the ink in 1927, “body … flooded with rapture and … brain with ideas,” what Woolf did with this work was take control.

_Orlando_ indelibly marks a moment where Woolf used her creative genius to process and overcome an emotional experience that could have consumed her. Who among us hasn’t been so inebriated by love — so frantic and shallow-breathed — that we find ourselves desperate to drown in the heart that pushes us away? With _Orlando,_ Woolf made an active choice to dive deeper into Vita, and the result was both a creative and personal victory.Vita’s allure was clear: with her rich aristocratic lineage and life filled with riotous romantic escapades, she arrived in Virginia’s life a ready-made character. Stoked by the fiery, androgynous, passionate contradictions at the core of her relationship with Vita, Woolf brought to life an imagined history in the character of Orlando, a protagonist who shifts between gender, time, and social class throughout the novel. Summoned as a brazen and vigorously male Elizabethan courtier, Orlando hurtles toward us through 300 years of history and lands as an Edwardian woman on 11th October 1928 (also the book’s final words).

> Who among us hasn’t been so inebriated by love — so frantic and shallow-breathed — that we find ourselves desperate to drown in the heart that pushes us away?

When Vita and Virginia met in 1922, their impressions of each other were not favorable. Vita was a best-selling writer, diplomat’s wife, and member of an ancient aristocratic family. Virginia was upper-middle-class intelligentsia, married happily to Leonard Woolf, a socialist, and a prolific member of the avant-garde Bloomsbury group of writers and artists.

Virginia thought Vita “brash,” “hard and manly — like a grenadier”; and Vita leveled the accusation at Virginia early on that she had no “grand passion,” that she was something of an opportunist who coldly saw everything and everyone as potential “copy” for her work. The irony was that Vita would become that grand passion. When Orlando finally meets Marmaduke Bonthrop Shelmerdine, the man who becomes her husband at the end of the novel, language once again fails, as Vita’s “squeal of pain” cried out from her letter in 1926. It almost seems a direct statement from Woolf to Vita that at the moment they fall in love, Orlando and Shel don’t exchange a word. Woolf refuses to pin their love down with language, to exploit it as “copy,” as Vita accused. They know everything about one another in a matter of moments, and so Woolf leaves a blank space on the page:

“Really it would profit little to write down what they said, for they knew each other so well that they could say anything, which is tantamount to saying nothing.”

Vita and Virginia were warned off each other almost immediately. Virginia’s circle was wary of Vita’s promiscuity and infamy, and derisive of her populist novels. Those around Vita warned her of Woolf’s bouts of mental illness, her left-wing politics, and the community of bohemian artists with whom she lived and worked.

In spite of the many forms of snobbery gnawing like disapproving termites at the roots of their burgeoning relationship, Vita pursued Virginia, and over the years that followed, an intense friendship grew. Theirs is an example of the deep, nuanced bond that can grow between women, and it should be celebrated. We so often associate women of the past with oppression, bound by the duties of marriage and domesticity, but Vita and Virginia offer an example of a relationship where they bent these institutions to their will.

> We so often associate women of the past with oppression, bound by the duties of marriage and domesticity, but Vita and Virginia offer an example of a relationship where they bent these institutions to their will.

Despite her marriage of over a decade to British diplomat Harold Nicolson, Vita was keen for the relationship to go further. Vita proffered a constant stream of invitations to elope together, but Virginia had always had a complicated relationship with sex. It is wrong, however, to presume that Virginia’s sexuality was in a state of total disrepair — her writing was always preoccupied with the body; it is visceral and sensory. She was also wry and provocative with language in her letters to Vita. In a letter to Vita in 1927 (when they were making a trip to get their ears pierced), she wrote: “Are you making an appointment to be penetrated on Friday?”

During a visit to Vita’s ancestral home in 1927, it was in fact Virginia who initiated their physical relationship. But, in a moment many of us will feel all too familiar with, when Virginia finally found herself able to give herself in body and soul to Vita, Sackville-West pulled away. The sheer intensity of Virginia’s giving seems to have been too much for Vita, who had spent a life refracting her passions across a community of lovers. As Vita pulled away, Virginia felt intoxicated, frantic. However, in despair she found inspiration, “like a fin rising from the water.” Woolf clung to Vita with the idea for a novel inspired by her, using it as an excuse to remain in intimate contact — literally and imaginatively. She used her work to pin Vita down, to take possession of her through fantasy.

Embarking on the novel in 1927, Woolf wrote to Vita: “It’s all about you and the lusts of your flesh and the lure of your mind … Also, I admit, I should like to untwine and twist again in some very odd, incongruous strands in you.” Vita replied, “Any vengeance you ever want to take will lie ready to your hand.” The battle lines were drawn as the artist and her muse undertook a creative endeavor fueled by their personal history, through a series of interviews and portraits.

For the first time, Vita found herself an object of scrutiny, and the shift in the power balance did not sit easily. As her work continued, Woolf’s intentions evolved; she came to understand that she was sparking a kind of literary revolution with _Orlando._ Herself the daughter of a diligent biographer, Woolf thought that biography had always sought to capture the things that happened to a person, but never the essence of the person to whom those things happen. It was this pane of glass between a person’s context and their essential nature that Woolf found herself about to smash with _Orlando_.

During the writing of the novel, Woolf’s literary fascinations overrode her personal feelings for Vita. Her dedication to disrupting the genre of biography with an explosive work that blended history and imagination grew like a vine around her romantic feelings for Vita, eventually overwhelming them entirely. It was as if she were exorcising Vita from her heart and enshrining her in literature. But the novel would never have been possible without her feelings for Vita; she announced herself as muse, and she beguiled and romanced Virginia with her words in their letters.

“This is the awful face of a mad woman whose successful desire is to separate people who care for each other. I loathe this woman for having changed my Vita, and taken her away from me.”In 1928, hot on the heels of the success that surrounded _Orlando_ ‘s publication, a parcel arrived at the home Woolf shared with her husband, Leonard; a copy of her novel, feverishly annotated. It was from Lady Sackville-West, Vita’s mother. The word _sex_ had been violently underlined, spiteful margin notes had been scrawled in outrage, and a photograph of Woolf had been pasted on the inside of the front cover with a note:

Matriarch of an aristocratic family whose history stretched back to William the Conqueror, Lady Sackville-West had a reputation for histrionics. She thought _Orlando_ — Woolf’s best-selling novel to date — a vicious book, declaring, “You have written some beautiful phrases in _Orlando,_ but probably you do not realize how _cruel_ you have been.”

However, years later, Vita’s son Nigel Nicolson referred to _Orlando_ as “the longest and most charming love letter in literature.” It both honored and satirized its subject. The discordance in how Vita’s own family interpreted Woolf’s imaginative biography of their kin reflects the complex and provocative nature of _Orlando_ : the book both buys into and opts out of literary and societal norms, just as Vita and Virginia did. They were women who forged a romance and a friendship all at once, while both were also committed to functioning marriages with men they loved and respected.

_Orlando_ is a bid for freedom, it is utopian: it frees its protagonist from the confines of time, gender, and history. It is the only one of Woolf’s novels with no deaths, and it proposes the idea of a new, modern freedom for its central character. But it is the story behind the creation of _Orlando_ that resonates with the modern reader most poignantly, echoing in the chambers of every heart that has been broken. In writing _Orlando,_ Virginia Woolf did not slay the dragon that was Vita Sackville-West but used her creative genius to tame her so she could remain in her life forever.

_Chanya Button is a writer and director, whose debut feature film,_ Burn Burn Burn, _is available on Netflix. She is set to make her second feature, about Virginia Woolf’s relationship with Vita Sackville-West,_ Vita and Virginia, _in 2017._