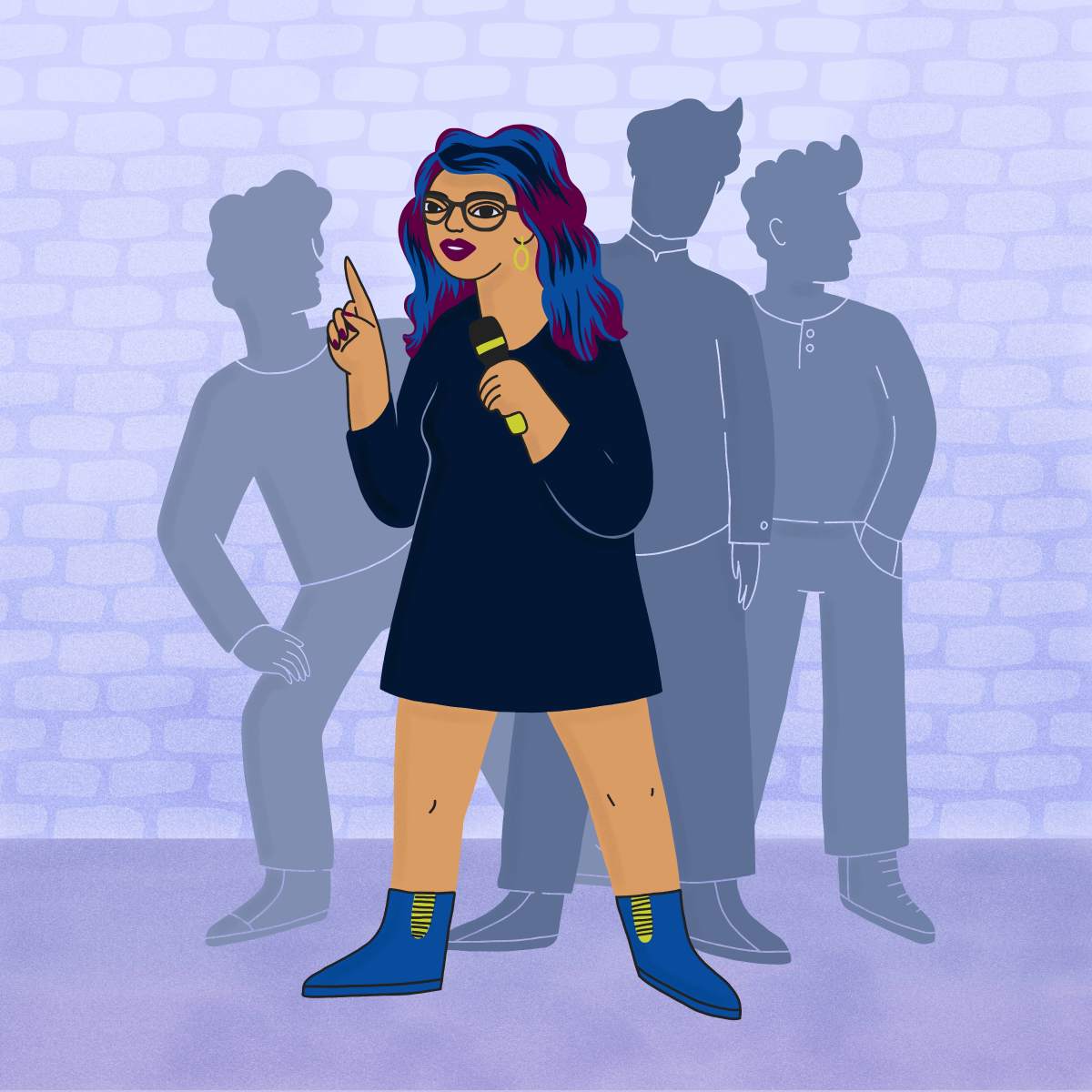 It’s a line from Mittal’s (2), which has been viewed over five million times on YouTube. The 31-year-old comedian’s popularity is set to explode further this year. In July, Mittal became the first female comedian in India to get a solo special on (3) — _Things They Wouldn’t Let Me Say_ — named after her solo show, which has made audiences laugh-cry all over the country.

So who is the _they_ in _Things They Wouldn’t Let Me Say_? “It’s a combination — all of these biases and the people who represent them, these ideologies that keep women down and don’t let them possess their bodies or talk about their bodies like they belong to them,” Mittal says. “If you write this thing about bra shopping, there will be a thousand dudes who’ll say, ‘How dare you?!’ And I’m just like, ‘One minute — I have them, and I’m going to talk about them.'”

As I wait to speak to Mittal on a Friday afternoon, I think back to the Indian films I saw growing up in the ’90s, when the idea of a “funny woman” was restricted to a cameo by an overweight character whose mere appearance was meant to elicit laughter and revulsion. Her weight was the joke. Things have progressed somewhat since then — Indian films now have layered female characters — but mainstream comedy in India is still dominated by male comedians doing deeply unfunny gags about women and jokes that only reinforce negative stereotypes.

“Big-name and small-time male comedians still only feature women in their material as angry girlfriend, crabby wife, suffocating mother,” says Nisha Susan, the co-founder of (4) site and the author of an upcoming book on Indian nurses. “Or: Isn’t so-and-so female chief minister so dark, _ha ha ha_ . Bore! After sitting stony-faced in more than a few of these shows, I’ve stopped going.”

Thankfully, there are funny, irreverent female voices — in stand-up and on Snapchat — that are getting directly to the people. And thankfully, Aditi Mittal exists, even if her audience features someone tsk-tsking, apparently surprised by Mittal’s seeming audacity to talk about the female body.

This is relatively new in India. While there are women who make a living as stand-ups or as comic personas, there are only a few brave souls are carving out a space in the genre of no-holds-barred performances. Susan points to comedians like (5), whose women’s-only show, called _Disgust Me,_ talks about sex and all things generally considered “gross.” For women to talk about sex in India, whether in comedy or mainstream cinema, is still uncommon, and women who do so are often stereotyped as being “bold” — shorthand for comfortable with sex.

Mittal grew up in Mumbai but went to boarding school in Pune and Panchgani. She started doing stand-up in her early twenties, had some initial success, then fell flat at a show. But she kept at it, and kept getting better. At a (13), Mittal talked about how she wanted to join the Indian film industry — ending up at a screen test where she was asked to read for regressive bits with dialogues rife with crass double entendres.

> With every quietly devastating punch line, Mittal is announcing it: she’s arrived.

When she started doing stand-up, she became enamored with the idea that comedy is honesty. “I wasn’t too aware of the myriad misconceptions or biases that people have,” she says. “I was literally told that if you are as authentic as possible and if you tell your version of the truth, you will have no problem saying it, because you won’t feel ashamed, you’ll be able to own it.”

But being honest is also a considerably difficult proposition, particularly in India. Mittal scathingly says that people would like to believe racism or casteism doesn’t exist in the way it did in the past — but that it still exists and manifests in different ways in society.

“There’s this constant conversation of ‘Why is there no Indian Jon Stewart, why is there no Indian Samantha Bee?'” Mittal says. But she questions whether Indians are prepared to hear the things that are wrong with themselves. “Comedy is seen as a cure-all, which is very sad, because the expectations people have out of comedians are _hilarious_. Man, have these expectations of people you voted for. We’re people sitting at two o’clock in pajamas trying to heat up yesterday’s lunch.”

But there’s also an (10) that currently dictates the political and social discourse in India — and seeps into comedy. (14) for using the (8) and even for making (6). While Mittal reacts to political events on Twitter, her stand-up act is more about the social politics and the stereotypes that challenge young Indian women.

Going through an archive of her sketches over the past seven-odd years is to see her voice evolving. Some gags work, others don’t, some take their time to land. But what’s consistent throughout is a streak of brutal honesty, exemplified through a character she plays: Dr. Mrs. Savitri Lutchuke. It’s Mittal dressed up as an older woman in a sari, playing the role of a friendly neighborhood doctor-meets-sex-coach, whose advice is peppered with a commentary on society. (“Another word for the female reproductive system is _family honor._”) Lutchuke is Mittal’s favorite voice, and how she gets around the urban, middle-class guilt that accompanies sex.

“I realized the impunity of being older — because you exit fuckable age,” Mittal says. “I see this from my grandmothers and my friends’ grandmothers. They’ll yell at the fishmonger from across three buildings, and they don’t care. The levels of fucks given by older women are so low — I love it! When I do Lutchuke, I feel like I am taking the permission of the world, like _I got it_.”

Though Mittal has been working, performing, writing, acting, and hustling since 2011, the notion that a woman’s success must be because of some _guy_ who gave her a shot persists. In Mittal’s case, that was being part of an infamous 2014 roast of two Indian actors that went viral. As Jugal Mody, a writer and friend of Mittal’s, puts it, she was on the show “because she was famous,” not the other way around.

Even Mittal’s major moment in the sun — the announcement that she was getting a solo Netflix special — was seen as a response to an (9). Mittal was on a show with male comedians when a (7) by (7) … mansplaining. She says she’d been in talks with Netflix for months, far in advance of when the Amazon deal was announced. The framing of Mittal’s success is understandably frustrating.

But she’s still very, very excited — and she wants to keep doing stand-up. “I feel like I’ve arrived. I’m talking about the things I want to talk about, in the manner that I want to say them.” With every quietly devastating punch line, Mittal is announcing it: she’s arrived, she’s going to talk about her breasts — and tits — and she’s not going to be drowned by the conversation and noise around her work. They can’t keep Mittal down.