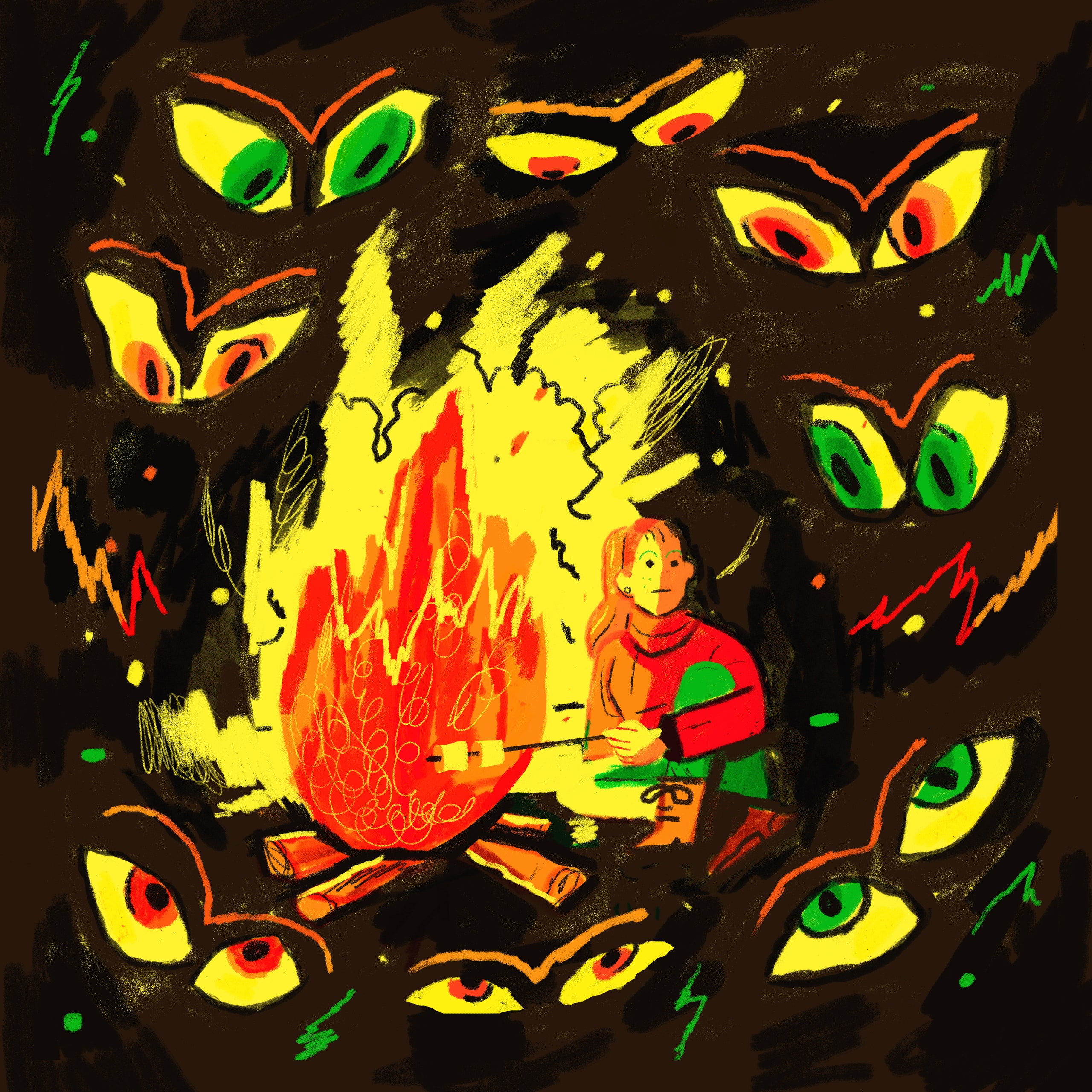 There comes a time in the life of every New York City–dwelling millennial with an Instagram where one takes a “trip upstate.” The advent of Airbnb has made light, Thoreauvian travel easy: gather a few friends or a devoted partner, rent a car or take the train, and bake pies and go on small hikes around a remote, well-designed house decorated with mid-century-modern furniture. Light a fire if you know how, cuddle under a Pendleton blanket, and come back to the city refreshed, having taken in necessary gulps of the kind of clean air you simply *can not* get in the city.

From the comfort of my Brooklyn apartment, I watch all of these bucolic trips unfold with only one sinister thought: these people have no idea that they’re about to get murdered.

I didn’t realize that I was afraid of nature until about two years ago, when I camped for the first time in my adult life, at Parque Nacional Natural Tayrona, a national park in Colombia. I was with a close friend, an experienced camper who came prepared with a tent, bug spray, and an incomprehensible fearlessness about sleeping among teeth-gnashing monsters in the great outdoors. The park is vast and preposterously stunning, and, because it is situated on the northeastern coastline of the country, during the days visitors relax on the beach with agua fresca, and during the nights visitors relax on the beach with spiked agua fresca. I liked *those* activities a lot.

But when it came time for bed, I slept with one eye open.

Contrary to popular understanding, meditative silence doesn’t exist in nature, and Parque Nacional Natural Tayrona is no exception. There are 108 species of mammals and 300 species of birds, as well as 70 species of bats. At night, the sounds of all these creatures become the soundtrack to a visitor’s rest, a blend of summer crickets and bird calls and alligators slithering into bay waters. To some people, these sounds are the ideal sort of lullaby — a tableau that communicates the meaningfulness of coexistence.

To me, these sounds indicate a terrifying unknown, one where a world of hurt lies just beyond my tent. When combined with the darkest of nights, the kind untarnished by city light poisoning, I was amazed when my friend’s breathing deepened and she fell quickly into a peaceful rest. *How was she not terrified of our certain fate?*

I did eventually fall asleep. But the thoughts of a creature unzipping the front flap of our tent and dragging me back to its den never left. As I pulled a loaned sleeping bag up above my shoulders, an imagined NY1 broadcast seeped into my dreams. An anchorwoman solemnly announced, “And she was never heard from again.”

Apparently, this kind of fear has a name: biophobia. According to research by environmental psychologists, (2), we are seeing a rise in biophobia sufferers — people who have a “prejudice against nature.” It’s causing panic among environmental scientists and national-park rangers who worry that we are turning into car-work-and-home-bound robots who can’t even stand the sight of a dying leaf in our midst. The *Times* reported on this phenomenon three months after I returned from Colombia: “Statistics from the Environmental Protection Agency suggest that adults, too, spend 93% of their lives inside buildings or vehicles, living under what nature writer Richard Louv calls ‘protective house arrest.’ ”

With no disrespect to Mr. Louv, I call bullshit.

I love to be outside. I love to get in touch with the world beyond my front door. I don’t even own a car. Patches of grass and trees and flowers are all beautiful gifts to the world that I like to gaze upon frequently. I even love the lulling sound of crickets outside my window in the summer and have made eye contact with many squirrels, some who stood poised to attack. I’m not prejudiced against nature at all — that nature just has to be within the confines of my urban dwellings, where the suffocating closeness of both people and buildings functions as my security blanket.

On a trip this year, my partner and I stayed in a converted farmhouse in Burgundy. (Sorry to be bougie, but there is literally no other way I can describe it.) For all intents and purposes, this was a dream vacation with the perfect lodging to match. We had just driven down from Paris, after spending a few days walking around and eating and going to “discotheques.” Driving onto the acres of property, I felt a sense of relief that I’d finally get to stretch my legs and eat all the cheese and meat we’d bought at a discount grocery store nearby. From the house’s front window, you could see lush hills, and there were hardly any other houses around. Like when my friend and I had first arrived to the national park in Colombia, I was awed to learn that such a devastatingly gorgeous place existed, and that I only needed to risk breaching the perimeter of New York City to find it.

Later, though, as the sun began to drift behind the horizon, my appreciative mood darkened.

I was spent from a jam-packed travel schedule, and the farmhouse bed was plush, but I could not, for the life of me, fall asleep. I tossed and turned while my partner gently snoozed — he’s a Vermonter, and finds nature not only normal but enjoyable. Despite how warm and inviting it was outside, I insisted we sleep with the glass doors closed: What if a big bear, a swarm of bats, or a crazed old farmer with a thirst for vengeance were to storm confidently in? I couldn’t risk it, especially with all that discount cheese waiting for me in the fridge. After lying wide awake for two hours, I did something that I am embarrassed to admit. I rummaged for headphones in my backpack and, with the brightness on my phone screen turned all the way down, I searched “New York City sounds” on YouTube.

What is probably surprising to no one but me is that not a lot of options pop up when you search for “New York City sounds” on YouTube. Who in hell would want to hear honking, police sirens, and shouts of “Hey, I’m walking heeah!” when they are not otherwise forced to? When I did find (3), I could tell that the person behind the ambient noises had to strategically create the soundtrack themselves through some miracle of splicing and editing. No sound engineer was traipsing through the city to capture field recordings of mayhem.

While I was ashamed about my life choices as I lay in bed plugged in to the somnolent lullaby of New York’s bustling streets, I felt less alone as I read the comments. There was one person who wrote that they used this soundtrack to fall asleep while camping. Another said that when he missed New York, he turned the looped track on (it is twelve hours long, after all). And there was this: “Thank you so much, this helped me go to sleep, I was born in the city and moved to the suburbs … then after that I couldn’t sleep because my brain was so concentrated on thinking instead of relaxing, truly thank you﻿.”

My creeping fear of death at the hands (or paws?) of some unidentifiable beast of nature slowly dissipated. And just twenty minutes after plugging into the playlist of doctored beeping and yelling, I fell into a deep, uninterrupted slumber.

I’ve lived in New York for a long time, and before moving here, I lived in two unimpressive suburbs within short distances of major urban areas. There were trees and parks, but they weren’t my thing then, either. I do not like to leave New York. And I find that when I do, I often end up in other cities, cities that I end up comparing to New York in my head. I like how stimulating and stressful New York is; I like how many people live there. I’m comforted by noise and liveliness, and unlike totally insane people (of which I know a few), I prefer the company of humans to animals. After enduring years of propaganda about how nature is supposed to be “relaxing” and how I just need to shut my mind off, I’ve accepted that not everything is for everyone, and while I’ll go on your “trip upstate” and eat your pie, just know that I’d almost always rather be at home in a hellish, lawless city than a dark patch of remote land. Better the devil you know than the one that you don’t.

I like all of the insanity that the city has to offer, and I actually sleep better when I know that there are millions of people sleeping within a startlingly close proximity to me. I’ve never seen a bear in person. I’ve never met an insect that I liked. I actually quite enjoy hiking — but would I choose it over an exhilarating bike ride through the city streets, where all of your senses are awoken and stimulated? No. There are no bodegas, free museums, or Duane Reades in the woods.

Funny enough, all of my favorite books are about the risky, alienating exploration of the natural world. *Endurance*, the story of Ernest Shackleton’s attempt to explore the continent of Antarctica only to fall short and nearly die in terrifying isolation with a crew of twenty-seven men, is the best book I’ve ever read. *The Lost City of Z* and *Into the Wild* and *The Strange Last Voyage of Donald Crowhurst* — true accounts of people who lost their minds in the natural world on journeys that had never been taken before — are high on my list of nonfiction recommendations. I love these books like others love horror movies. Reading about people who voluntarily submit themselves to the wild, knowing that certain death at the hands of an unidentified beast with a dozen limbs and bloodthirsty eyes is surely around the corner, is much safer than actually doing it myself. People scream “Don’t go in there!” at slasher movies. I mutter “This would have never happened if you stayed home!” into books.

I’m glad that explorers and enjoyers of the natural world exist, that groups of millennials can find peace in rented houses that are surrounded by vast thickets of woods, that people voluntarily sleep on dirt when all kinds of unknown dangers await them. But I’ll catch up with you guys later — I’ve got some field recording to attend to.