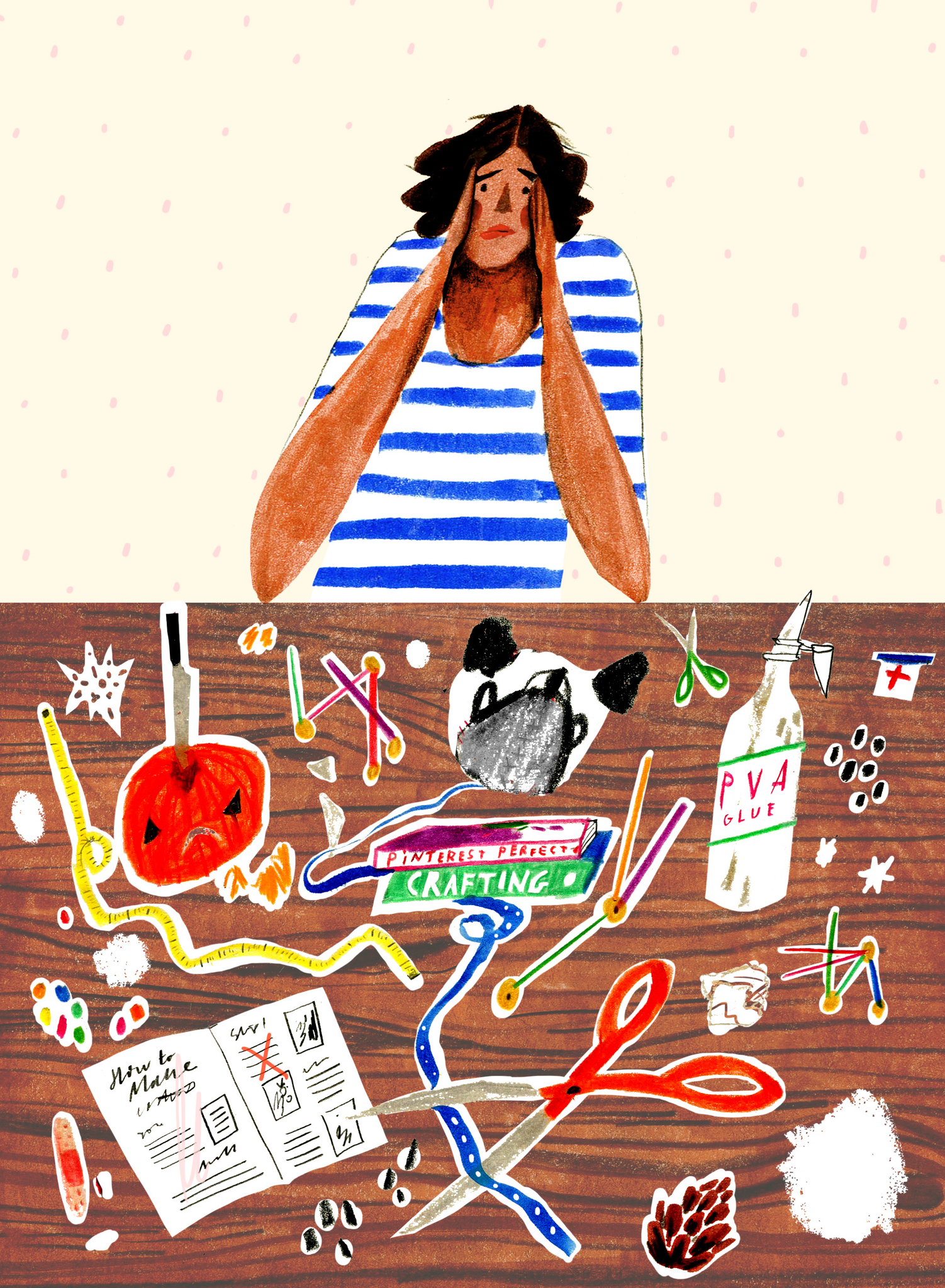 A few weeks before Halloween, an acquaintance of mine posted a Facebook comment expressing how guilty she felt about not sewing her four-year-old’s costume from scratch. She framed the post as a “confession,” like it was some shameful secret that her kid’s panda-bear getup came from Target. This is a woman who works full-time at a demanding, high-profile job. She and her husband don’t live near family, and both of them travel for work, so a lot of her posts are about being sleep-deprived and stressed out. _She doesn’t even like crafting, she took pains to point out._

Reading this, I wanted to reach through my screen and shake her. Why did she think that hand-making her child’s costume was a worthy use of her precious free time? Had she been forced to watch marathons of _Martha Stewart Living_ with her eyes pried open, _Clockwork Orange_ style, in her formative years? Did the shame of failing home-ec continue to invade her anxiety dreamscape deep into her adulthood?

I expected her other friends to push back on her guilt — to tell my pal that her four-year-old didn’t care and wouldn’t remember if she made the costume from scratch, that it wasn’t a priority in her very busy life, that she shouldn’t do truly optional things that she actively hated. But instead, I remember many affirming her guilt. One said something along the lines of: _Every year I make myself miserable making a costume out of some weird sense of obligation._

This paralyzing sense of obligation is something I’ve observed in many of the mothers I know. It doesn’t seem to be coming from one particular source; it’s the entire ambient middle-class mommy culture that surrounds them. We’re in a moment where, theoretically, we should feel free to establish our own standards of good motherhood — we’re accepting of the fact that families come in all different formulations, and we laud women for rising to greater and greater heights in their careers.

> This paralyzing sense of obligation is something I’ve observed in many of the mothers I know. It doesn’t seem to be coming from one particular source; it’s the entire ambient middle-class mommy culture that surrounds them.​

But instead of acknowledging that kids can thrive with various kinds of caregivers, we seem to have decided that the ideal mother is some unholy hybrid of Marissa Mayer and a Mormon mommy blogger. The culture is telling women: you need to be leaning in as far as you can at work and creating a Pinterest-perfect family tableau at home, replete with foraged-pinecone centerpieces and smiling tots happily eating their homemade quinoa cakes.

So why do we feel this way? I think it’s the confluence of a few recent trends: the emergence of so-called “intensive parenting” — the idea that parents need to spend more time and resources on their kids than ever before; the current vogue for everything all-natural and the artisanal; and the embrace of social media as a kind of parenting panopticon.

Jennifer Senior, who wrote the book about modern parenting, the _New York Times_ best seller _All Joy and No Fun_ , pointed out to me that (2), even though we do many more hours of paid work. So what on earth is this pressure to craft? “I suspect it’s our response to a culture that’s still HUGELY ambivalent about its working mothers,” Senior wrote in an email. “We’ve internalized this idea that we’re neglecting our kids, and we try to assuage our guilt by doing all these silly, frilly projects.” (It’s worth noting here that poor moms have always worked. The phenomenon I’m describing here is among a more privileged set of mothers).

My friend Hanna Rosin, who is also a brilliant analyst (1), believes that “crafting” is about much more than just the time spent hand-sewing a My Little Pony mane. She agrees with Senior that the desire to make that costume is “partly a public-presentation thing — it tells the world that you’re the kind of mom who pays close and individual attention to your child.” But it’s also “a rebellion against shitty mainstream costumes. Whereas store-bought costume transmits: ‘I am last-minute consumer mom. I race into the Safeway and buy toxic cupcakes.'” It is in the same vein as the pressure to buy all-organic onesies and reclaimed-wood Tinkertoys.

We wouldn’t know quite so much about our peers’ consumer choices if they weren’t shoved in our faces 24/7 via social media. Ten years ago, you wouldn’t necessarily have known your fellow moms were up ’til 3 a.m. making those Spider-Man costumes. But now you know every detail of the costume’s creation because they are telling you all about it on Facebook, curating links to sewing patterns on Pinterest, and then posting an artfully arranged shot of their beaming child on Instagram on November 1. “I also think of Pinterest as a kind of tyranny. I tell everyone I know not to even LOOK at the site,” Senior says.

I want to make clear that I am not immune to these pressures, though I don’t feel them about crafting specifically. For me, it’s cooking homemade, organic meals from scratch. I haven’t been able to do this as much lately, because I am working longer hours, and I feel deeply awful about it every time I spoon Annie’s (organic!) mac and cheese and cut-up cherry tomatoes onto my daughter’s owl plate.

I also want to emphasize that this is not a screed against crafting. If you love to craft, you should do it! Do it every spare minute, if you want. Make me a beautiful scarf and I will brag to everyone that you made it for me, spreading word of your talent near and far. This is a screed against mothers feeling guilty (for the record, I’m against fathers feeling guilty too, though I have never, ever heard a dad say he felt bad for not hand-making a goddamn thing). It’s also a screed against the notion that a mother’s happiness and her child’s well-being are somehow mutually exclusive.

And so, it’s my New Year’s resolution to stop doing things I hate doing: to erase that pang of guilt I feel about not making the perfect roast chicken every Sunday night; to remember that what other parents think of me doesn’t really matter, and that my parenting reflects my family’s values, and those don’t have to be identical to anyone else’s; and to never, ever hand-sew a panda costume, so long as I shall live.