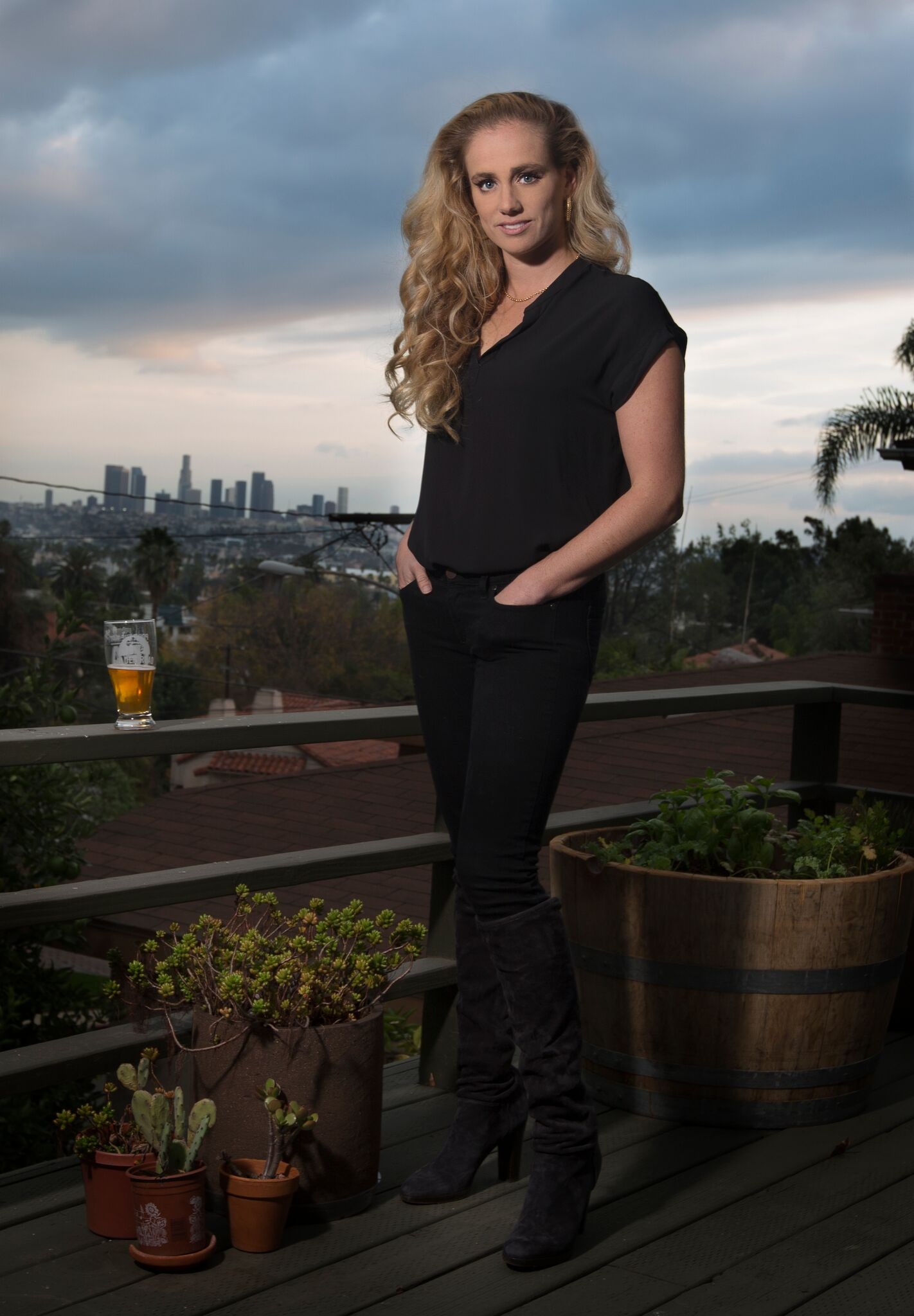 It’s no secret that craft beer is having a moment — fancy bottles crowd corner-store shelves, and robust IPAs have become standard barroom fare. Yet somehow beer is still seen as a dude’s domain. Stumble into any craft-beer festival or tap takeover, and you’re immediately swept up in a sea of cargo-shorts-clad men, all sipping and sniffing and waxing poetic about hops and grain. Just beneath its bro-y surface, though, more women are fighting their way into the increasingly popular industry’s ranks: according to a recent survey, (1), with young women ages 21 to 34 making up almost half of that number.

At 29, (2)’s Meg Gill proudly accepts the title of America’s youngest female brewery owner, representing a rising tide of fellow lady beer geeks eager to slip on their rubber boots and shatter the industry’s time-honored frat-party façade. Here, we talk to her about how she got into brewing, her experience being a woman in a male-dominated field, and what she’s sipping on these days.

**Meredith Heil:** How did you get into beer? Do you remember your first craft beer or the first beer that really turned your head?

**Meg Gill:** Growing up in Virginia, I remember beer just always being around. My parents are light drinkers — they enjoy one or two beers a few times a week. When I was a kid and I would help my mom cook dinner or whatever, she would say, “Hey, go down to the basement and get me a beer.” And if I went and got her that beer, I would get to take the first sip. I loved the taste and the carbonation and the complexity of those beers. I was always dying for that first sip — and it was only sips for a long time.

After graduation, I drove from New Haven to Boulder, Colorado, and I was super-broke, basically coasting on fumes. But that didn’t stop me from paying a buck extra for a craft pint. I remember walking into a beer bar in Boulder, having a Yale degree, a ton of debt, and an unpaid internship, but ready to taste the world ahead, you know? That night, after two days of driving and a bit of anxiousness about starting a life in a town where I didn’t know anybody or what my future held, I got a Fat Tire, and I was like, “Oh, man, this stuff is great.” That bottle was my first step in what would end up being a real adventure into craft beer.

**MH:**  So how did you go from tasting Fat Tire in Boulder to breaking into the beer industry?

**MG:** I was working at this start-up event company in Boulder, and I started this event series that needed a beer sponsor. So I met with Dale , and the plan was to bring his beer into new cities with my events. At first, it was just good exposure for him, but when he saw that I understood how to sell beer and was interested in the industry, he took me aside and said, “If it ain’t fun, I ain’t doing it. You’re fun, so let’s do it.” He hired me right then and gave me the opportunity to open any and all markets that we could.

At that point, selling craft beer in a can was very difficult. People assumed when you came to a meeting with a can of beer that it wasn’t going to taste good. You really had to get in front of people and let them taste it, and that hand-selling was what built my passion.

**MH:** What did you love about it, besides that hardscrabble hand-to-hand element?

**MG:** I really loved blowing people’s minds. I would walk into a meeting and they would see me in my Oskar Blues T-shirt — at the time, I was 22 or 23, but I looked 15, with my ponytail and shorts — and they’d be like, “What the hell are you doing, little girl? And why are you trying to give me some shitty beer in a can?” And then I poured this super-hoppy, incredibly fresh Dale’s Pale Ale into a glass and had them smell it and taste it and drink it. That was super rewarding.

**MH:** As a woman in a male-dominated industry, did you experience any pushback? Either from the industry side or as a consumer?

**MG:** Yeah, I would say both. Nowadays, I think it’s funny when I sit down at a bar and order a beer and the bartender — it’s usually a guy — tries to discount my knowledge. It’s funny and entertaining at this point, but early on, it bothered me a lot more. When I started in this industry, I didn’t have many resources. I didn’t have access to money, my parents hadn’t been in the beer business all their lives. I didn’t have a lot of things that could up my value, other than what I knew about craft beer and my ability to teach people. So I overcompensated. I worked harder and learned more because I knew I wouldn’t be taken seriously unless I armed myself with tons and tons of knowledge.

**MH:** When I walked through Golden Road, I think I saw more women in positions of power than I’ve seen at almost any other brewery I’ve visited, which is quite a few. Is that sort of gender dynamic something you’re working toward specifically?

**MG:** I mean, we’re fair on gender practices, or whatever HR statement you need to qualify it with, but look, you tend to attract people who are like you. We have men and women at the company, young men and women in high positions, that are eager and entrepreneurial and willing to roll up their sleeves and do anything to learn.

**MH:** There’s been a bunch of articles written about you, quoting you as being the youngest female brewery owner in the country. What does that title mean to you?

**MG:** Four years ago, that title was something that was bestowed on me, and all that media attention made me a little anxious at first. I felt like I was in the beer business before, so what’s the difference between working for a brewery and starting one? To me it’s the same — I’m a workhorse wherever I go. But then, something clicked, and I realized that the responsibility of that title could actually be pretty cool, that we could do really great things with it like bringing in great staff and encouraging more women to get into the beer business. So, once that initial nervousness wore off, I was proud to be an advocate for more women in beer, and I still am.

**MH:** What kind of advice would you give to a woman who was considering getting into the craft-beer business?

**MG:** I would say be brave and have … I don’t want to say balls, but women can have balls too, right? Have the balls (or whatever) to go in and exert the right energy and knowledge for whatever you’re doing. Do it with enthusiasm and passion, and anything can happen.

One of my favorite stories is about our HR manager, who I could not live without — seriously, I could not function at work without her. Her name is Liz Fowler and she’s 27 now. When she started with us, she was 23, maybe even 22, and it was right before we started the brewery. We hired her as a nanny to help Tony and his wife because they had just had their twins, and we also needed some administrative help.

So, Liz came into our organization that way, as an hourly worker doing odds and ends, and now she’s one of our senior people. She runs HR here at Golden Road as well as at Tony’s beer bars, which makes her responsible for like 300 people. I can’t tell you how important HR is — anybody can buy the equipment, but it’s the people that make the business run.

We have a ton of stories like that, but that’s my favorite, because to work your way up that quickly in any organization is awesome, and the fact that she’s a young woman without any prior experience in the beer industry, that’s just the coolest thing.

**MH:** What beers have you been getting into lately? What are you excited about?

**MG:** Right now, I’m super into dry-hopped wheats, because it’s just so fucking hot here, right? I’ve always loved IPAs — IPAs are my style — but right now, in L.A., the wheaty mouthfeel, the brightness and the freshness of the hops in our Citra Bend, that’s what I’m drinking so much of. My favorite non–Golden Road hoppy wheat is Gumballhead by Three Floyds. And then New Glarus makes one called Hopster, which is fantastic as well. It’s all super tasty.

_ (3) is a writer, producer and drinker living in Brooklyn._