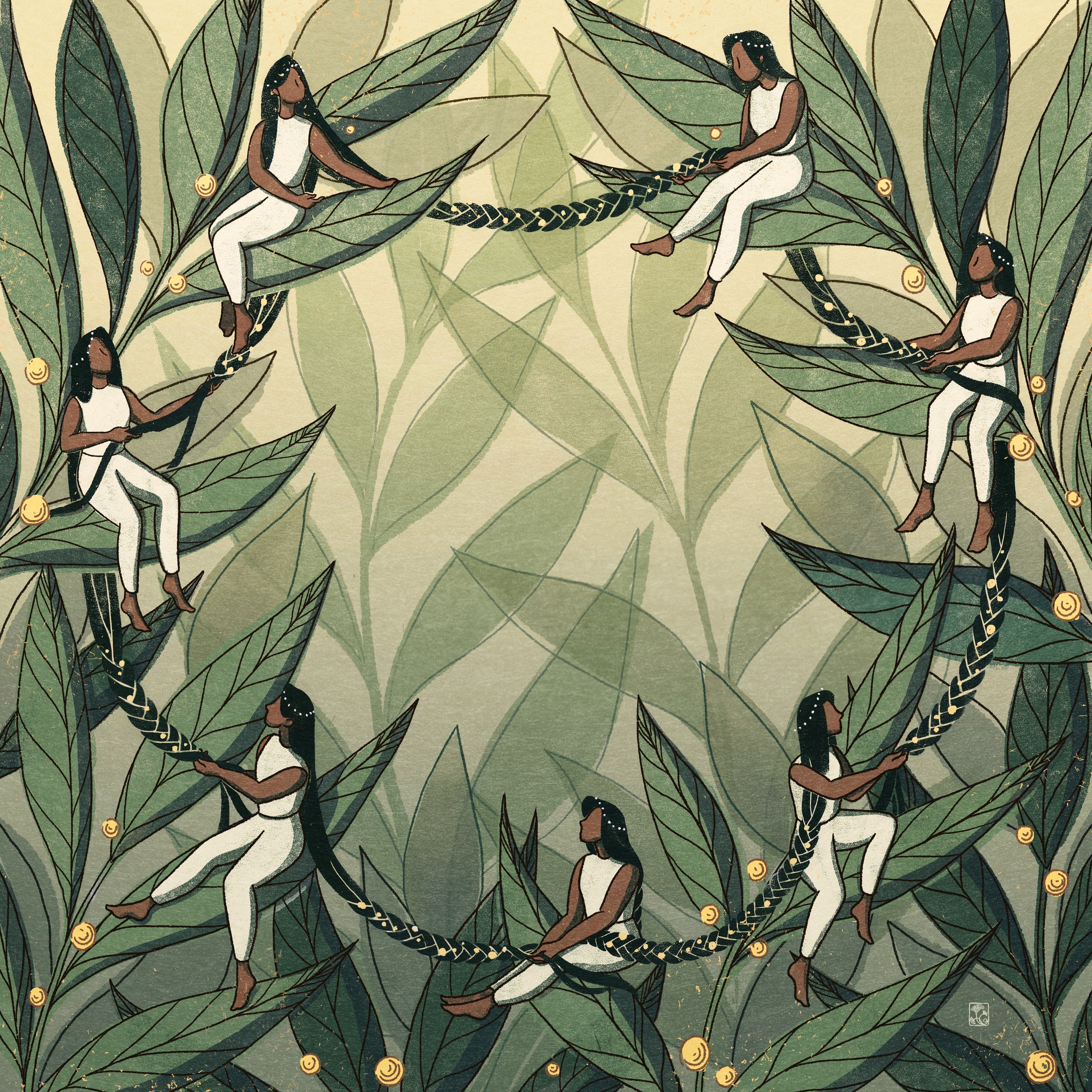 I will never forget the feeling of waking up before everyone in my house in the morning before a school day. The sun would sing with me as its rays beamed through the living room and stretched into the dining and kitchen area. Every moment I had alone was a gift in a house of seven. I’m the eldest daughter in my family: I have three younger sisters, plus a younger *and* an older brother. Suffice it to say, our house was dominated and run by the girls.

We’d do morning prayer together. Hooya, our mother, would light frankincense, and we’d line up after taking turns performing ablution in the bathroom sink. Feet touching, we’d pray in sync. Almost all of our daily tasks and the routines that involved taking care of our bodies and our survival were communal. From helping each other wrap our hijabs to swapping items in one another’s closets to cooking and divvying up the chores, I rarely did anything alone.

As much as I loved my “me time” in the morning, I loved the symphony of movement around the bathrooms, mirrors, and kitchen. Getting ready in the morning felt like being a part of a disorganized assembly line — our limbs reached around one another to grab breakfast foods, hair ties, or extra pens and pencils before the school day. I, without anyone asking, would take it upon myself to “delegate.” Tasks that would be lonely without the four of us became entertaining. Even when I wasn’t trying to be a tyrant.

Time doesn’t slip through your fingers like sand when everyone has a hand in trying to achieve something simple, like, for instance, detangling a head of hair with cornrows and laid edges. On the weekends, as we got ready for the school week, Hooya would put me to work. I was responsible for my youngest sister’s hair. She’d sit right under me, bracing herself for the tugs and pain of the detangling process. Before it even started, we would be red in the face. I would be visibly sweating, partly because of laziness, and partly because doing hair is a workout, and we’d all wear a hijab to school anyway. As she’d yelp in pain, my other sisters or aunties who would come through would step in, annoyed with my outward displays of defeat. Four hands combed, detangled, and braided her tiny head, and she’d gleefully run to the bathroom mirror, in awe of what had been accomplished.

As the eldest daughter, I grew up with a God complex, and with a lot of bold, different personalities under one roof, fighting was inevitable. Even on our best days, my sisters and I would argue. My father would always gather us together and talk to us about how we’re stronger together. He’d take a bunch of pencils, wrap rubber bands around them, and ask us to try and break them in half. We’d all take turns with our tiny hands and weak wrists, trying to prove his theory wrong. Then he’d ask us to try and break the pencils one by one, and each of us would break the pencils in half. He’d tilt his head in a nod; his body language said, *See?* Although I fantasized about how my life might have been if no one had been born after me, I later came to the realization that my siblings, this community in our house, didn’t take anything away from me. I learned how to put aside time for all of my siblings’ concerns. There are days where they all call me at once, frustrated. Our father’s passing put me in a position where I needed to parent them and at times fight for them to do the things I was never allowed to do, because together, we were unbreakable.

In Minnesota, where I grew up, I was comfortable. I had my entire family. I was friends with the same people for more than ten years. The mosque was a second home to me. My hometown was filled with big, Black Muslim families like ours that had similar traditions of gathering in prayer, in mourning, and in action. Islamically, we believed that we had an obligation to look out for one another. In times of crisis, the community raised money. A couple of phone calls and my mom was able to find a math tutor for us. After my father passed, women from the mosque brought enough dishes and groceries to our home to last us for months. When we were applying to colleges, the older girls who I grew up with told me to venture far out, to whatever city I wanted to live in. They edited my essays. They encouraged me to start a Blogspot for my writing. Instead of seeking out a mentor, I was lucky to have a community that believed that the success of any one of us was everyone’s success. I was raised by a village that was surrounded by lakes and barns, but a village of Somalis nonetheless.

When I first left my hometown, I dealt with a gnawing emptiness because of how my community was embodied in my daily routine. For me, building and fostering community is essential to my survival. It’s not always sunshine and happiness; the greatest loves and the greatest heartbreaks I’ve had have been with the women in my life: my mother, my sisters, my friends, my aunts, and my cousins. When I got to NYC, I made it my mission to seek out and hold space for new friendships and sisterhoods. I had to ask myself: How does one build community when capitalism isolates us from one another, forcing us to put our work before anything else? Humans are dependent on one another; all living things are. I cared too deeply about anyone who I came across to not replicate the networks I had back home.

The first place I looked for community was online. I’d search tags I was interested in on Twitter and Tumblr, and I followed everyone en masse. Our mutual exchanges on the dashboard and timeline turned into group DMs, private DMs, and it wasn’t long before their numbers were saved in my phone. My closest friends, my Somali NYC girl crew, have held me up in some of the most hectic parts of this year. Ifrah is the classical Libra: diplomatic, charming, and avoidant of all confrontation. Asiya embodies everything about a Taurus: she’s reliable, practical, and devoted to everything she does. Iman is the other water sign in our clique, a Cancer: sensitive, kind, bubbly, and charismatic. I met both Ifrah and Iman on Tumblr, and I met Asiya through them. The Internet probably knows more than it should about me, but I’ve also met some of my best friends there, so I don’t mind.

I noticed that in New York City, people didn’t speak to each other much, and as a Minnesotan, my body physically rejected that. Thank God it did. One of my first jobs in the city was as a nanny. I would spend a lot of time in the park watching as the kid I was looking after played with friends. The other nannies tended to be older, mother-like figures, and though they would talk to me, they normally talked among themselves. But one day, there was a Black girl at the park, also nannying, and my hands were kind of ashy, so I asked her if she had lotion. That is the story of how I met one of my favorite people on this planet, Mali. She said, “Of course I have lotion; *I’m a Black girl*,” and the rest is history.

The friendships I cultivated with these different women are magic, and I would like to believe that I have multiple covens of women who conjure the best out of me. Mali is one of my smartest friends; she is also an Aquarian woman to the nail. She sleeps early, she does what she wants, and she’s quick-witted. She sets boundaries with the sharpness of a knife, and she never compromises them. My friends Catherine and Yohanna and I catch up on all things pop culture; they’re both passionate and brilliant and offer me perspectives that are different from the ones I see online. Reva and I hit up every other party in the city together; she’s talkative and refuses to settle for anything less than she deserves. Ivie is sharp and has a calmness that I strive for. Her hustle is unmatched, and she never lets the petty stuff distract her; her focus is laser-like and contrasts with my busy, scattered energy. It’s soothing. Sydney is similar to her in that she stays in her lane; she’s a calm Taurus who loves the finer things in life. They were the first two writers I met that I found a community in, but we didn’t only talk about work — and that taught me that we were always more than the work we were doing.

My favorite moments are when everyone gets to meet and I act as a facilitator between the friend groups. By now, most of these girls have met one another, and sometimes they’ll even do things without me.

I’m a Pisces: I’m emotional and intuitive, and I have no tolerance for self-doubt. My impulsive attitude stretches across all the covens I belong to. When a friend is in doubt about unfollowing someone, I say, “Fuck it. Block them if that’s what you want to do.” And if there is a confrontation, I’m right there, backing them up.

On the first weekend of this year, Ifrah, Asiya, Iman, and I convened to set our intentions. Together, we burned sage and lit our intentions on fire — allowing the smoke to clear the way. Other times, we just meet to eat and catch up, allowing ourselves to talk about everything we don’t feel comfortable speaking about among other people. I can’t help but pick up on everything everyone is feeling around me. This care keeps me grounded; it gives me purpose and allows me to be a kinder person. Not everything is a transaction, and in that way, I understand that I am very maternal. I care a lot, and though we are taught to put ourselves first, I strike a balance by putting aside time in my day to make my rounds of calls or get coffee with old roommates, just so that I am reminded of a humanity that still exists in this world.

Seeking out friendships, carving out the time to listen to one another, and holding space to emote exists in the traditions of the women around me. I allowed myself to care and built a community I can always fall back on. Even as my mother raised all six of her kids, she was intertwined in the lives of all the other people she was mothering. And she made a mother out of me too.

*Najma Sharif is a writer and shape-shifter living in NYC.*