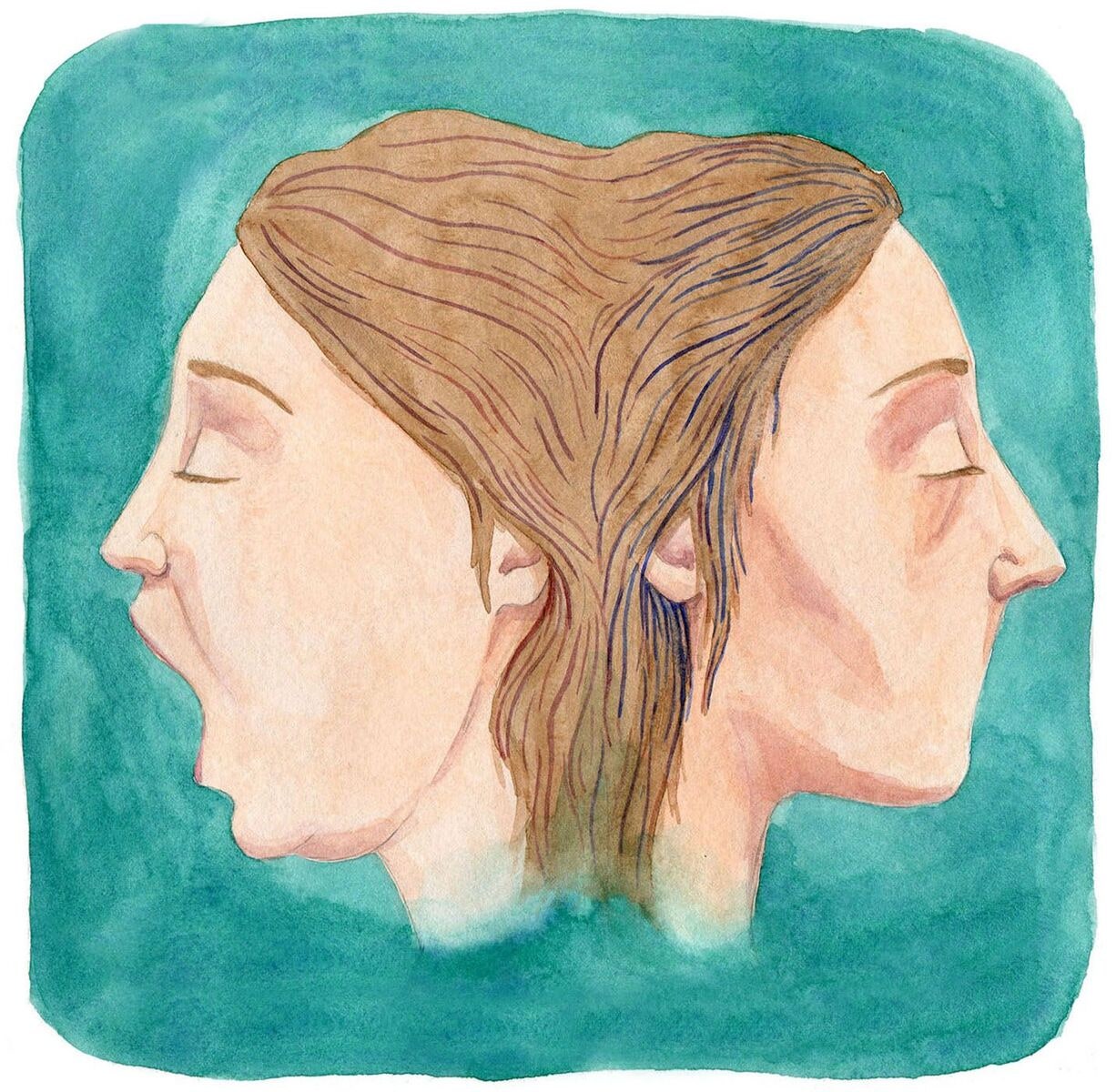 Alice* stopped eating at the same time that I couldn’t. Ever. I woke up with a candy bar and snacked on microwave popcorn until breakfast. When my appetite eluded me, I’d light a joint and conjure it back, at least long enough to eat a pint of ice cream before dinner.

Reports of Alice’s thinness started coming in daily, outraged calls from our friends back in Chicago telling me how bad it was getting, how skeletal she looked. She wore jeans so tight they revealed pubic bone and nothing else. “Aren’t anorexics supposed to hide their bodies in baggy clothing?” I’d say, indignant, eating my fourth doughnut in 20 minutes, lighting the glass pipe stuffed with weed, inhaling surreptitiously while the person on the other end agreed. Alice was starving, and she was shoving it down everyone’s throats.

Alice used to be my best friend. She was the family I wanted to have, the girl I longed to be. She was naturally thin, pretty, funny, smart, a good Jew. She knew all the Shabbat prayers, even the ones after the meal. My family is Israeli, but I didn’t even know there were prayers I was skipping. We lived together for four years after college, had all the same friends, the same jobs, the same dreams, the same voice. Our own parents couldn’t tell us apart over the phone.

> We lived together for four years after college, had all the same friends, the same jobs, the same dreams, the same voice.​

Then she dated my ex-boyfriend, and the sameness of our worlds didn’t seem so fucking delightful. When Mike** started calling for her, I could feel his anxiety as he tried to figure out which one of us had answered the phone. “Hiiiiii,” he’d stall. “It’s Mike.” Then I’d have to go, “Hi Mike, it’s *Tami* … how’s it going?” Sometimes I’d volunteer, “Let me get Alice for you.” Sometimes I’d act like I thought he was calling for me, just to force him to ask for her. If I could taint their joy for one second I would. I spit in the Gatorade she kept in the fridge. I read her diary. I kept a brave face around our mutual friends and tried not to fall apart at the workplace we all shared. I thought I’d lose my mind. I ended up moving out, eventually to Los Angeles. She ended up living with Mike and getting promoted to my old job.

And then she just lost so much weight.

Despite the endless updates on her wasting away, I wasn’t prepared for the Alice I saw two years later in L.A. She came for pilot season and she wore her disease proudly, defiantly; a hunter cloaked in his prey’s skin. She looked like a gutted deer. What really shook me, though, was her face. While mine was receding into a vast pillow of fat, the left side of Alice’s chin had disappeared. Her body had given up on food and had begun to feast on itself.

She got lost on the way to my office, and I had to go looking for her. I asked a security guard if he’d seen a tall brunette, thin. “*Really* skinny?” he asked, two words never uttered in Hollywood.

When we did find each other, I struggled to look in her eyes, to not stare at her chopstick thighs. She wore high-heeled boots so that she towered at six foot, and sideways almost nothing. I was chattering away, but all I could think was, *How did she find clothes*? Alice is five-foot-nine and at that point had the hips of an eight-year-old, yet manufacturers were churning out stuff that fit her — and fit her exactly. Her outfit was as revealing as an X-ray. Yet I, five-foot-five inches, overweight, yes, but nevertheless a supposedly average American — I couldn’t find a pair of jeans for all the diuretic tea in China. I cast sidelong glances at her lopsided chin and her razor-sharp clavicle, soothed myself with thoughts of all the Skittles and M&M’s I’d eat when she left. All the weed I had waiting for me at home.

I didn’t just babble at her and silently judge. I openly judged too. I shut my office door and said, “You look skeletal.” I said, “I’ve known you for ten years and you’ve never looked this bad before.” I said that Karen Carpenter dropped dead of a heart attack at 32, that I knew when I called earlier she was out running. That she was always running. I said goodbye.

> I didn’t just babble at her and silently judge. I openly judged too.​

I said: *You fucking cunt how can you do this.*

I said: *How could you betray me like that?*

I said: *I still don’t forgive you and you still haven’t apologized.*

I said: *Who the hell do you think you’re fooling?*

I said: *You’ve always been the martyr, the one who endures, the one who grins and takes the bikini wax, the broken leg, the dead dad. And now you’re martyring yourself on this cross of hunger and I’m here to tell you that you’re not sacrificing anything. You’re addicted to the chemical rush that No gives you and that’s just as bad as my Infinite Yes.*

I said, “Alice, I’m scared.” That’s the one I really did say. I said the skeletal thing, too. “You’ve always been thin but this, this is horrifying.”

Alice sat and watched me cry, giving in a little, agreeing to bits and pieces. But she wasn’t there. Say what you will, that it was the disease protecting itself, that such a severe nutritional deficiency corrupts the brain, that she wasn’t herself, that she was physically incapable of being herself. Say all that, and I’ll tell you all I could hear was Alice saying, I don’t love you.

> Say all that, and I’ll tell you all I could hear was Alice saying, I don’t love you.​

*I don’t love you* is what I heard when she tied herself to Mike, when she lied about their phone calls, their movie dates, the secret initials she used for him in the to-do lists she left on our kitchen table. Once I came home at midnight to discover them on the front sidewalk, leaning on their bicycles, on the edge of a first kiss but knowing they had all the time in the world to get there. I wanted to run home and disappear, but they were in front of my home. Our home. I said a quick goodnight and went inside, prowled up and down our apartment for a restless half-hour until she finally came in.

Two months later, I woke up at four in the morning, plagued by a relentless mosquito attack. I retreated into the living room and saw a tall, shadowy figure make his way down the hallway. I screamed. Then I realized it wasn’t a rapist but Mike, it was just Mike, it was OK, it was — oh G-d, it’s Mike — she really — they really — I had less than a second of relief from terror before I tumbled into dread. My heart had stopped, and now it was just broken.

> My heart had stopped, and now it was just broken.​

Back in college I waited tables at a pizza place called the Med. One of our regulars was a graduate student in English. She’d order a bowl of minestrone and eat none of it, make a mess with the accompanying crackers, tearing them into tiny pieces that she’d push around the bowl. She did everything to the food but eat it. We watched her knowingly, curiously. She was always bundled in her woolly sweaters, her birdlike bones so infinitely breakable. She tipped extravagantly, $10 for a $2 cup of soup. I think she felt guilty foisting her anorexia on us. Or maybe she wanted to make sure we noticed her, even as she was disappearing.

She wasn’t cute, and that was odd to me — to be so unattractive, yet so ruthlessly thin. I felt most unsettled, though, when she’d come to the restaurant with a friend, a pretty Asian grad student. I always wondered about her friends, her colleagues. How could they live in the presence of such a blatant and aggressive suicide?

That night in L.A., asking the guard if he’d seen Alice — replying, yes, she is really skinny — I felt on display myself. I was even more fat than usual, and our appearances no longer mirrored those of sisters or the cool lesbian couple on campus — both things we’d once been mistaken for. Instead, we were like two odd aunts in a Roald Dahl story. One too tall and spindly, the other roly-poly stout, both lonely, lonely, trapped by appetites we couldn’t begin to fill.

*Tami Sagher is a writer for* Girls *and* Inside Amy Schumer.