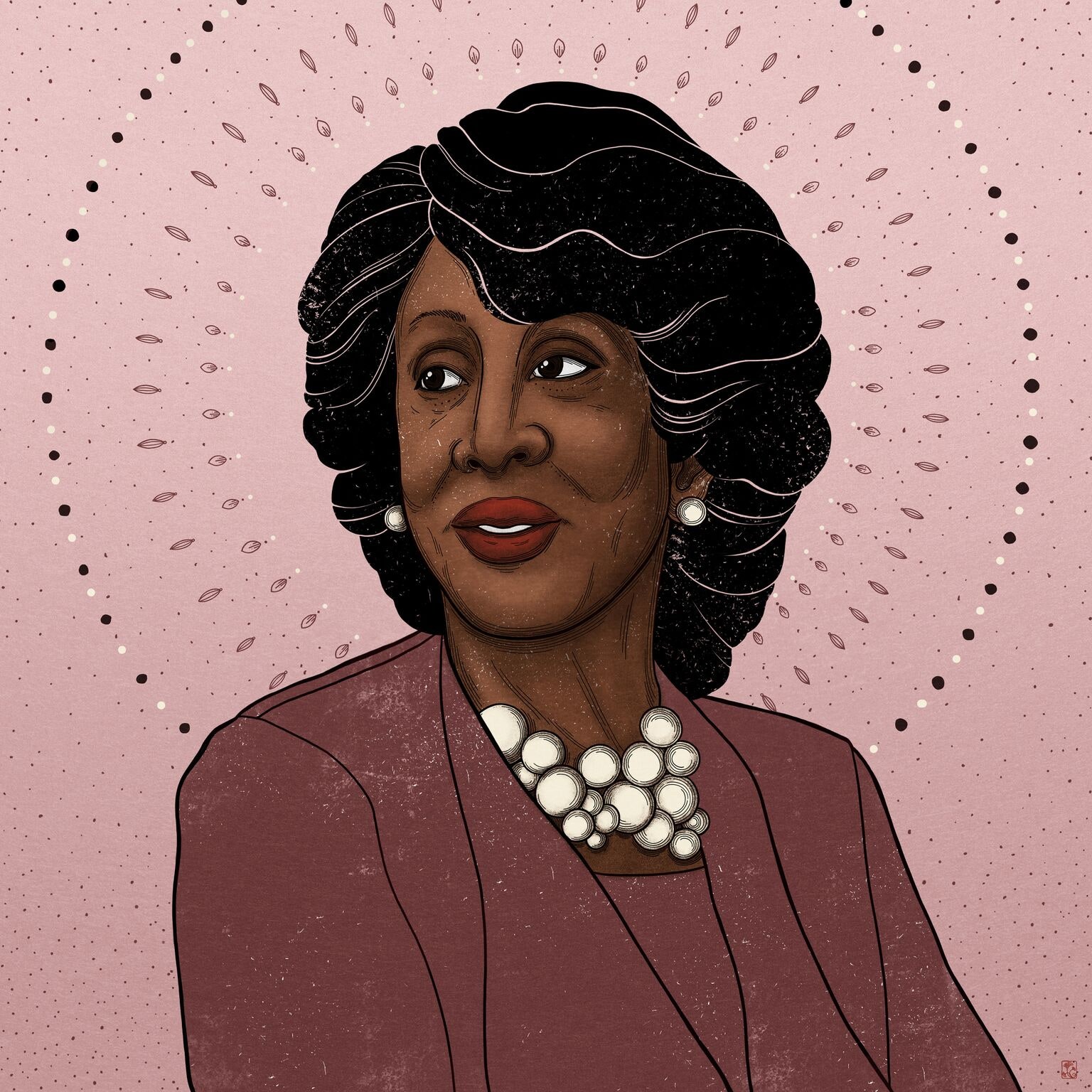 My black-girl soul soared high above my pajama-clad body in March when Representative Maxine Waters said on national television, “I am a strong black woman, and I cannot be intimidated.” She became an instant heroine, and I watched her clip nearly 100 times. It became my new bop, the song I listened to when I needed to be reminded of my own particular greatness in a world where women and girls like myself are told to be grateful to be let in.

Like millions of millennials and movement-makers who follow the 78-year-old congresswoman, I have clung to her every side-eye, her every call for impeachment, her every grandstanding attempt to speak truth to power. She feels close to home for me. She sounds like the women in my family: powerful, melodic, and straight to the damn point. It’s the reason why the Internet dubbed her Auntie Maxine, claiming her as their own, striking an adoring familial connection. My admiration for Representative Waters followed me as I entered her office at the Rayburn House Office Building in Washington, DC, to interview her for the latest episode of my Lenny Letter podcast, _Never Before_ (1))_._

Representative Waters has been in Congress for nearly three decades, representing California’s 43rd congressional district, which is centered in South Central Los Angeles. Though she’s in her fourteenth term, Auntie Maxine became a political “It” girl, errr, woman, of sorts in the wake of Donald Trump’s election as the 45th president. Representative Waters has called for Trump’s impeachment on the record more than any other person in Congress. This has made her a life-giving political leader of the resistance _and_ an easy target on the right, particularly with Fox News hosts. One went so far as to compare her to Whitney Houston and advised the congresswoman to “step away from the crack pipe,” while Bill O’Reilly insulted Waters’s appearance on air by calling her hair “a James Brown wig.”

But Auntie Maxine is clear that there is nothing wrong with her appearance, her words, and her work, and in our hour-long conversation, some of which is excerpted below, she addresses the criticism, but, more important, she discusses how her roots in segregated Missouri shaped her as a young black woman, how her mother taught young Maxine to raise her voice, and how the burgeoning feminist movement helped her win her first election.

**Janet Mock:** I want to go back to the beginning. I feel like so many who know you as Auntie Maxine may not know your roots in Kinloch, Missouri, the first African American town to be incorporated in Missouri. How did that vibrant black community shape you?

**Maxine Waters:** Well, I was very young when I was there, but it was a very warm community where everybody knew everybody. Of course we were accustomed to black entrepreneurs where we shopped at our grocery store and at our bakery. Our schoolteachers were black. We had a very positive image of black leadership throughout our community. Churches were very supportive. It was a very warm and supportive community.

**JM:** Do you remember the first time you used your voice and got a reaction as a young woman?

**MW:** Oh, no. My mother was like this, she was very outspoken. She had no filters, really, so I think that most of her children grew up that way. We didn’t know that we were speaking out, we didn’t know that that was different from the way that other people are taught to react to other people, and to voice their opinion. It was quite natural for us, and I think most of us have done that all of our lives.

**MW:** She didn’t. She raised kids. My mother had thirteen children.

**JM:** That’s quite a living. I don’t think you have time to do anything else.

**MW:** We were all eager to work when we were young. All of the kids in my neighborhood worked during the summer in various jobs. We had some of the young people in my neighborhood who actually went to work in strawberry fields and picked strawberries during the summer in the outlying county areas. I worked at Thompson’s restaurant, where I cleaned tables. It was segregated; we had to eat in the basement.

We felt responsible for ourselves, and we weren’t looking to our parents to go out and buy our clothes, or to buy a new bicycle for us, or new skates. We did it for ourselves. You know what I’m saying? We took a lot of responsibility at an early age for ourselves and our well-being.

> What we’re seeing now with tweeting and Facebook and all that, that’s a new way of organizing. I tell you, sometimes I just go through the tweets and laugh all night long.

**JM:** How did you get from a small town to being politically active in your community?

**MW:** My family moved from Kinloch to St. Louis, where I attended most of grade school and high school. Then I married young. My first husband was in the service, and we went to California, where I worked all kinds of jobs. I worked in factories, and then I was an operator for Pacific Telephone. Then I became a service representative, and then (2) and it talked about Head Start, a program where working families would have an opportunity to provide early-childhood education for their children in the way more wealthy families could. That excited me and some of my friends.

I ended up in Head Start as an assistant teacher and became supervisor of parent involvement and volunteer services, where I organized parents to help fight for the funding for Head Start to keep it growing. It brought me in touch with the politicians, and I learned about which politicians were great and were supportive, and which ones were not. That took me into volunteering in campaigns for those politicians that I thought were supportive. The women’s movement was coming into being, and I got involved with (3) and (4), and these women’s organizations.

My predecessor before I ran for the California State Assembly had gotten in some kind of trouble, and he was going to leave. He tried to close down any opportunities for anybody other than his assistant to run for the seat. He didn’t tell anybody he was going to leave office, so at five minutes to five, he and his assistant went into the secretary of State’s office. He filed, and of course it closed everybody else’s opportunity, because filing was over on that day. There was a woman who was the secretary of State, March Fong Eu, and I had some friends who were a judge and ACLU. I went to them, I said, “Something’s wrong with this picture.”

We went to her and she opened up the filing for another five days, and I filed. The women got behind me, and we campaigned in some new and different ways. We didn’t have as much money as the opposition, but at that time, gardens were becoming very popular. So we packaged garden seeds. At that time, the community was basically a still-growing Latino population, more black population, and a dying-out white population. We sent carrot seeds to the whites, we sent cilantro to the Mexicans, and collard greens to the blacks. We would go knocking on doors: “Ms. Waters, I got my seeds.” Years later, because collard-green stalks grow real tall with big leaves, and they stay for years, people would tell me, “Come see my stalk,” or “I’m gonna fix you some collard greens,” and on and on.

Anyway, we campaigned in new and different ways. I’ll never forget this story where my friends were over campaigning in Southgate, this was a white part of the district, and they were asking them to vote for Maxine Waters. They didn’t have any pictures of me or anything. They said, “Maxine Waters, is she an N-word?” She said, “No, she’s a woman.” They said, “OK.” That’s a funny story that became a real laugh in our campaign. We had our whites in the white community, they were significant voters, but the black women in the district, I listened very carefully to them, and I started to put their wording back into campaign literature. They would see me, I would talk to them, and they would say, “Why not a woman?” I’d do my literature: Why not? Why not a woman? Connecting back with them.

We created some new ways of doing things, but that’s why it’s so important for young people. I was talking to the college Democrats and millennials, saying, “If we don’t have that kind of new thought interjected into the way we do things, we’ll become stagnant.” What we’re seeing now with tweeting and Facebook and all that, that’s a new way of organizing. I tell you, sometimes I just go through the tweets and laugh all night long.

**JM:** One of your most viral moments was in reaction to Bill O’Reilly, after he compared your hairstyle to that of James Brown, who has great hair. You were asked to respond and you gave the greatest sound bite. Of course, I got my entire life from that, because as a young black woman navigating white spaces, it was nice to be reminded that we can speak back. What would your advice be to young black women, specifically at work, who are constantly being told that they should be contained, that they should be quiet, that they should sit in the back and just be grateful to be let in?

**MW:** I have a theory that I’ve developed about many of the millennials. They have gone to school, they’ve gotten educated, they had their sights on a career, their parents were supportive and pushed them on. Told them, “You’re going into the corporate world,” or what have you. “Dress right, do this,” and all of that. They did all those things, and then they got to the water fountain and they discovered that they were seen and perceived quite differently, and that there were comments that were made and actions that were taken that were disrespectful, not appreciative for someone who had invested their time and their energy just like some of the other people in the workplace who may not have been African American, etcetera.

I think this thing about Auntie Maxine and loving the way that I speak out has to do with “I kept quiet, I did everything they told me to do, and look what they did to me. That’s right, Auntie Maxine, tell them.”

_Janet Mock is the author of_ Redefining Realness _and the new memoir_ Surpassing Certainty, _out today._