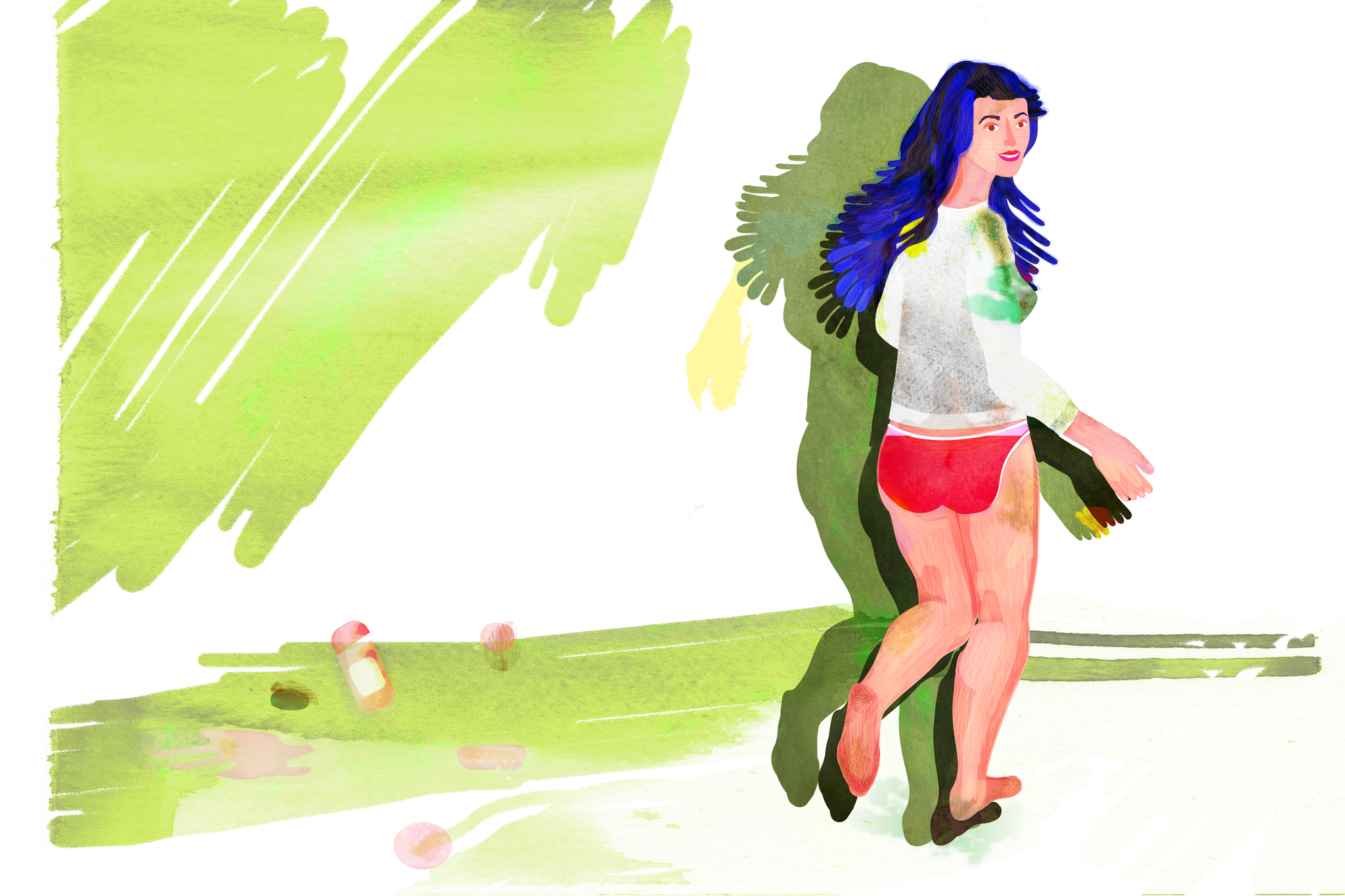 A clean lady’s got it together. The words *immaculate* and *unblemished* are actual synonyms for being free of dirt. In movies, a shortcut for showing a woman is depressed or sucking at life is that she’s not showering. (Remember Melissa McCarthy telling Kristen Wiig in *Bridesmaids*, “You gotta wash that hair”?)

For a while I bought into this. I woke up and went straight to the shower. While I was in there, I always washed and conditioned my hair and shaved my armpits and legs. I scrubbed my face at the first sign of any oiliness, which meant I de-slicked it at least four times a day. I laundered my jeans like every time I wore them, even in the unlikely event that I hadn’t spilled anything on them. I never forgot deodorant.

When I started working from home, I didn’t deviate from this clean-person routine. In an office, I felt like I was being evaluated on how polished I looked as much as I was being rated on what I was actually doing at my desk. It was one of those intangible things people could have opinions on, on the same level as what I ate for lunch or if I used a standing desk. So I faithfully kept myself as shiny and stain-free as I did when I had to commute to work, even though my pet fish isn’t at all judgmental. And then I thought: *Fuck it*. As I started feeling free from certain nonnegotiable restrictions that had been a given in my office life (like not wearing the same outfit three days in a row and not taking midday naps) and incorporating them into my day (midday naps rule), I wanted to play with the more nebulous constraints too. Would it really make a difference if I were sitting in front of my computer with dirty hair? I soon realized that it didn’t; no one cared, including me — and I loved spending more of my time doing exactly what I wanted, not what I had to or felt like I *should* do. In other words, not worrying so much about being presentable helped me move the bar for presentable and made me feel liberated from the time-suck of constant scrubbing. That made more moments for pondering, reading, talking to the coffee dude, writing, and making dumb faces at my fish.

> Would it really make a difference if I were sitting in front of my computer with dirty hair?

I’m not so subversive that I was going to give up showering entirely, but letting go a little appealed to me. I knew there were new products that could help me do this. These products simulate what shampoos, soaps, and laundry detergents do without actually being any of those things (i.e., they don’t use sodium lauryl sulfate, the harsh detergent that’s in most products that foam). They’re designed to help you shake off the mind-set that you have to be squeaky-clean — they say leaving some dirt, oil, or bacteria behind is good for you.

The gateway drug of this stuff is cleansing conditioner (often called “co-wash”), like Briogeo’s Be Gentle Be Kind Co-Wash or Aveda’s Be Curly Co-Wash, which you use instead of shampoo. It doesn’t lather, which is weird (essential oils and aloe vera do the dirt-removing). And I have to use a whole handful to make me feel like it’s doing anything, but I like the way my hair is tamer and smoother than it ever was post–real shampoo. It used to take at least until the evening for my hair to look as lanky, textured, and close to Cara Delevingne’s as I wanted it to, but now it’s that way right after it air dries.

It works best if you have dry or thick hair, like I do, but even so, after a week of trying it, the front of my hairline was pretty greasy. In a way that shows how easily I am convinced I have to go all or nothing with beauty products, I didn’t know what to do about this. Hairstylist Jon Reyman at Spoke & Weal in Soho had the answer. “Just use shampoo on that part of your hair,” he said. Duh.

Saying goodbye to shampoo has become pretty acceptable, sort of like people in their 30s admitting they didn’t know what #netflixandchill meant until they used it incorrectly, but very few of us are willing to disclose that we’re skipping body wash and deodorant, too. Most of the makers of those products haven’t rushed out less-stringent versions, either. An exception is Mother Dirt’s AO+ Mist. The brand is centered on the idea that the bacteria on our skin helps it function — this is called the microbiome — and scrubbing away these microorganisms harms you. (More on the veracity of that notion in a bit.)

The spray, then, replenishes the so-called “good” bacteria that we’re currently drowning in body wash. The more of it you’re coated with, the company says, the better your skin will look and feel. “This includes anything from improvements in hydration, the balancing of oil production, improvements in body odor, and the overall soothing of the skin,” AO+ Mist’s instructions say. “Because of these benefits, users find that they can cut down or cut out cosmetic products like soaps, deodorants, moisturizers, etc.”

I started trying my mist at the beginning of the two weeks I was on a grand jury, which meant that if it went badly, all the people the government forced to sit in the same room with me would suffer too. After a soapless shower, I gave myself a once-over with the spray (and a twice-over on sweaty areas like underarms (yep, no deodorant)). I doubted it would work. The spray didn’t smell like anything, which made me even more suspicious. I really was prepared to be the smelly juror.

> I really was prepared to be the smelly juror.

But whatever alchemy took place when the mist-propelled bacteria met my skin was great for it. After a week, my body felt as soft and smooth as it does on the best summer nights, and I swear I didn’t stink. I tried to verify this, but everyone I asked to smell me refused.

In general, dermatologists agree that we should quit aggressive cleansing. “Repeated scrubbing or washing with hot water can dry out the skin and damage its ability to function,” says Murad Alam, M.D., professor of dermatology and head of cosmetic dermatology and dermatologic surgery at Northwestern University. But there’s no science that says we do or don’t need to bolster our skin’s bacteria. That doesn’t mean that you should or shouldn’t build up this bacteria, just that it’s a lifestyle choice, not a doctor-ordered one.

The final piece of my suds-denying life was not washing my clothes as much, but this was the least successful part. There are new products to help out here, too, like Athleta’s “Unstinkable” fabric, which has natural silver salts that absorb the smell of barre class, and Wool & Prince’s button-down that can be worn for 100 days without cleaning. But while my Athleta leggings didn’t reek like I’d sweated through an uncomfortable number of leg lifts, they did smell faintly metallic, and the Wool & Prince shirt was so itchy that I wanted the washing machine to pummel it. There are also sprays made to “refresh” denim — think Febreze for jeans — like Mr. Black’s, but as with those odor-eaters for sneakers, I felt like I was smelling the masking agent and the funk at the same time.

My mom likes to say that being clean “just makes you feel better.” But I found the new filth-heavy me liberating. I loved giving the whole damn personal-maintenance thing a rest. For a long time, I believed (at least secretly) that a woman’s job is to look and smell nice, and it was fun to muck that up. No one really has surprising personal preferences these days (1)), but telling people I wasn’t using soap did give conversations a nice charge.

And I actually thought I looked and felt better. Maybe it was just the flush of trying something new, but I also think it was partly because it was freeing to stop spending so much time controlling my body. I accepted that no matter how many times I cleaned my hair or skin, it was just going to get dirty again. Focusing on my interior helped me get deeper into my long-term thoughts, as if I could allow my brainpower to linger on what I wanted for that day or that month, instead of blowing mental energy on the short-term concern of whether my face was greasy. It was nice not to start every day feeling like I had to be a clean slate, and the more I left myself untended, the better I felt rolling around just as I was — even if that true self was a little dirty.

*Kayleen Schaefer is a journalist in New York and the author of* (2), *a Kindle single.*