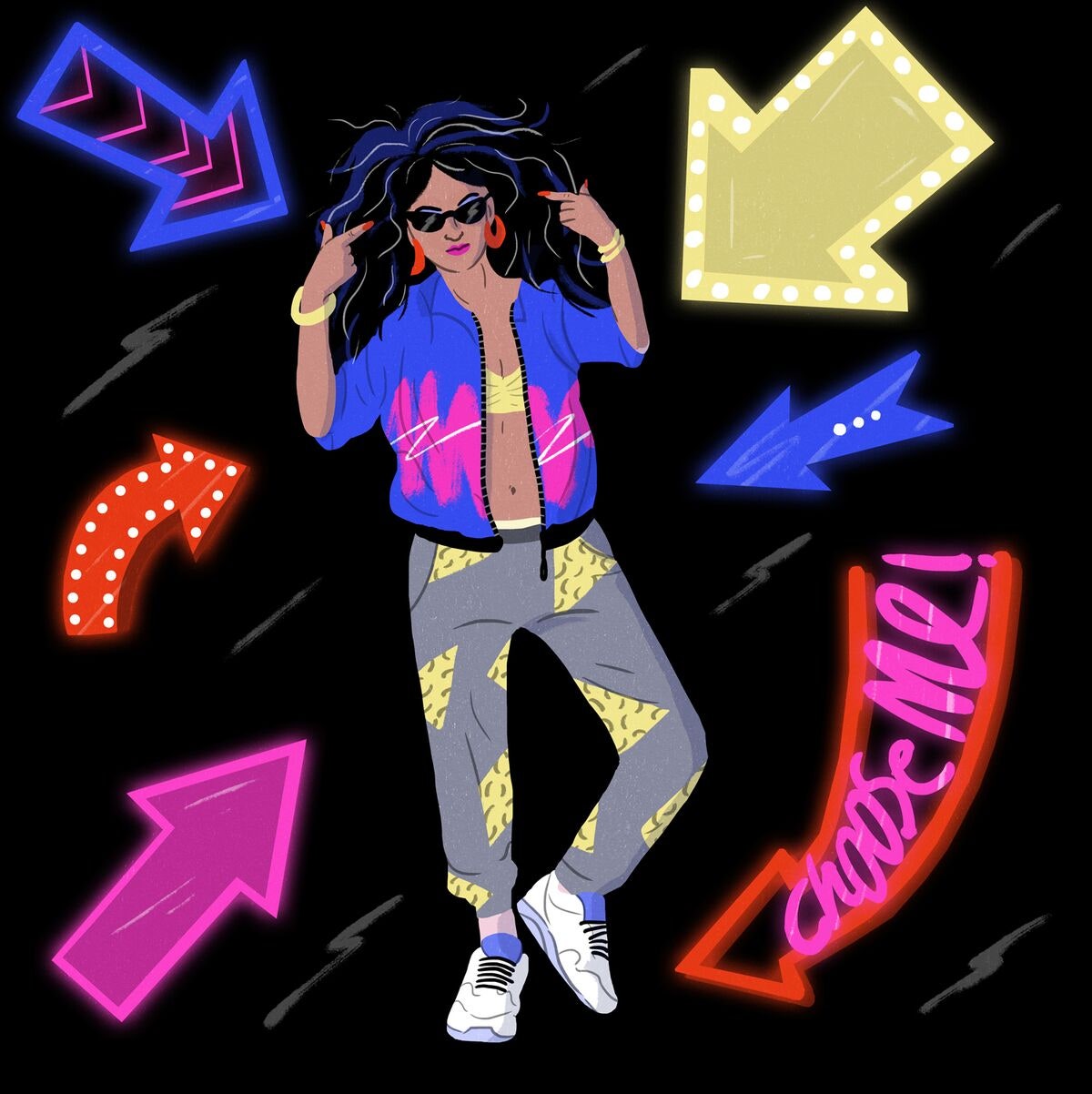 1992—I worked at the Winchell’s Donuts on Robertson Boulevard, across the street from my high school. An old dirty boss smoked cigarettes in my face and asked me out all the time, and some kids came in at night and pulled a gun and donut jacked me. Guys I knew from school. Guys that I woulda been like, “Here, Marcel, take the donuts.” But because I had foster parents in the ZIP code with houses instead of apartments, they acted like we were from different planets. Me and these guys had gone to junior high together back when girls left curlers in our bangs and guys sported flat tops: we’d been in dancing crews, bailed in pajamas to school, and filled baby bottles with fruit punch.

The year before, when I’d stayed in the apartment with my mom, I’d be up late night, adjusting the hanger and the foil on the rabbit ears to watch _Pump It Up With Dee_ on the UHF channel. I’d practice all the dance moves and try to memorize the lyrics, because that was my ticket out.

The second I moved to the neighborhood with _Heights_ on the sign, I became _presumida,_ stuck-up, Oreo, jungle-fever-struck ho, slut wannabe, Coconut, bitch. My Cinderella dream machine came in the form of talent scouts. Guys on the sidewalk in baseball caps and clean sneakers, calling us in to do some test tape. Girls my age with work permits and big dreams became extras. Video hos.

When I was around eight, I had a spunky friend who bossed me and dressed me, and she’d stand in her driveway, hand on her hip, taunting me: “How does it feel to want?” It was a line in a film she’d seen.

At that time, outside of wanting to be her, I could not afford to want. I wanted to have her hair, the way her hairspray and crimping iron gave her that perfect Alyssa Milano flair; I wanted her capacity to pick up dance moves, jumping off a chair like Janet Jackson in the ” (1)” video. I wanted her mom, how she sat with us at night and tickled our backs until we fell asleep, how she gave us health food, wheat germ, and honey. Then, as a teenager, I was nothing but a meat sack of want. And the less I had, the more Want.

Growing up, two things were everything — money and color. My dark-skinned brother was punching his way into solitude in county jail while my bright, light ass looked out the window of a basement room in a group home by the ocean. Ingratiating myself to rich folks was an option reserved for me and my long, wavy hair.

It finally happened, just like the dream, when I was sixteen. I was walking past the Beverly Center, and some friends and I got stopped — asked if we wanted to do a music video. Emily, Athena, and I were play cousins. Light-skinned girls with curves. The guys were Artemus and Colin. Artemus was a tall, chocolate dreamboat with short dreads and a nose ring, a poet. Colin was the Player, light eyes, a gentle voice; he smoked beedis and was endearing like a guy being raised by a single mother.

> Underneath it all what I really want is love, to be seen, to be touched wholly with all my good and all my naughty bits.

The five of us reported to an office the next day, walked in front of a camera, made small talk about stuff we knew about, trying to be interesting. We stood against a white wall and had a Polaroid taken of ourselves. Then we got the call. (2) They were a fairly new West Coast rap group none of us had heard of yet. It was a lesson in what happens to everyday people when the camera turns on. People you’ve never heard of gain power; they tell you where to stand, what to wear. People you know — even tough bitches — comply.

The set of the shoot was a dusty lot with vacant houses. My girlfriends and I were ushered into one of the houses, the place buzzing with the swish of wardrobe bags and flip of makeup compacts. A short woman with carabiners attached to her belt loop and a clipboard against her chest hollered out, “All right, girls, dress in your sexiest outfits!” Shirts got knotted up above belly buttons, shorts rolled up. Some girls threw off a cover-up, wearing just bikinis.

Meanwhile, I wore my prettiest dress, an ankle-length flower sundress. We were paraded outside in a line, and the guys in the group picked over us. _Her, yes; her, no; her, yes; her, yes; her, no._ I was a maybe — sent to join my guy friends in a house off-camera. For food, there was a table with a box of Cheez-Its, a big bottle of water, and a bag of apples. There were about a hundred of us. Take after take, we danced. The Alkaholiks walked through the vacant lot, lip-synched into the camera, rolled some dice, threw a basketball into a hoop; we kept dancing. Again and again and again.

Four hours into taping, they announced we were going to a second location. I walked off the set. Someone followed me out and asked where I was going. I said I was done. He said I should be happy with my fine yellow ass. I told him my fine yellow ass was hungry, and I didn’t look back.

It wasn’t too long after that I got a call to dance in another music video. This was different — Lenny Kravitz, a union set. Good food. A bump in pay every time we had to change clothes and if we were exposed to smoke. Mandatory breaks. On this set, I made the opposite mistake: One of those breaks, I got too comfortable with the talent and asked one of the musicians for a cigarette. He looked past me. I was invisible.

For some girls, videos were the ticket out: They got agents, they did commercials. Not me. There was something too personal and painful about not being chosen.

If you watch the Alkaholiks video, you’ll notice two things. (1) My sixteen-year-old play cousin Emily sitting on the lap of one of the guys in the group, wearing a Kangol, her shirt tied up like Daisy Duke, her acrylic nails digging into his thigh; and (2) about halfway through the video, it morphs into yet another video — different location, different song. I’m nowhere to be found.

Becoming background seemed to just feed the Want. That **_choosemechoosemechooseme_** desperation ricocheting inside of me is that exact original wound that my system seems too fragile to tolerate.

It’s still there today, that dull, achy imprint of Want. I want ridiculous things with no purpose: chrome gel nail polish and lipsticks, nonsensical outfits, jumpers, one-pieces, boots, espadrilles, a certain pair of something, soaps and face creams. I want accolades, acceptance notices from fancy literary journals, fellowships. Underneath it all what I really want is love, to be seen, to be touched, to be held, to be kept, to be possessed wholly with all my good and all my naughty bits, a no-turning-away kind of love. I want to move through the world with ease, and to remember to walk off the set when I need to.

*Melissa Chadburn is a fellow for (3). Her debut novel,* A Tiny Upward Shove, *is forthcoming from Farrar, Straus, & Giroux.*