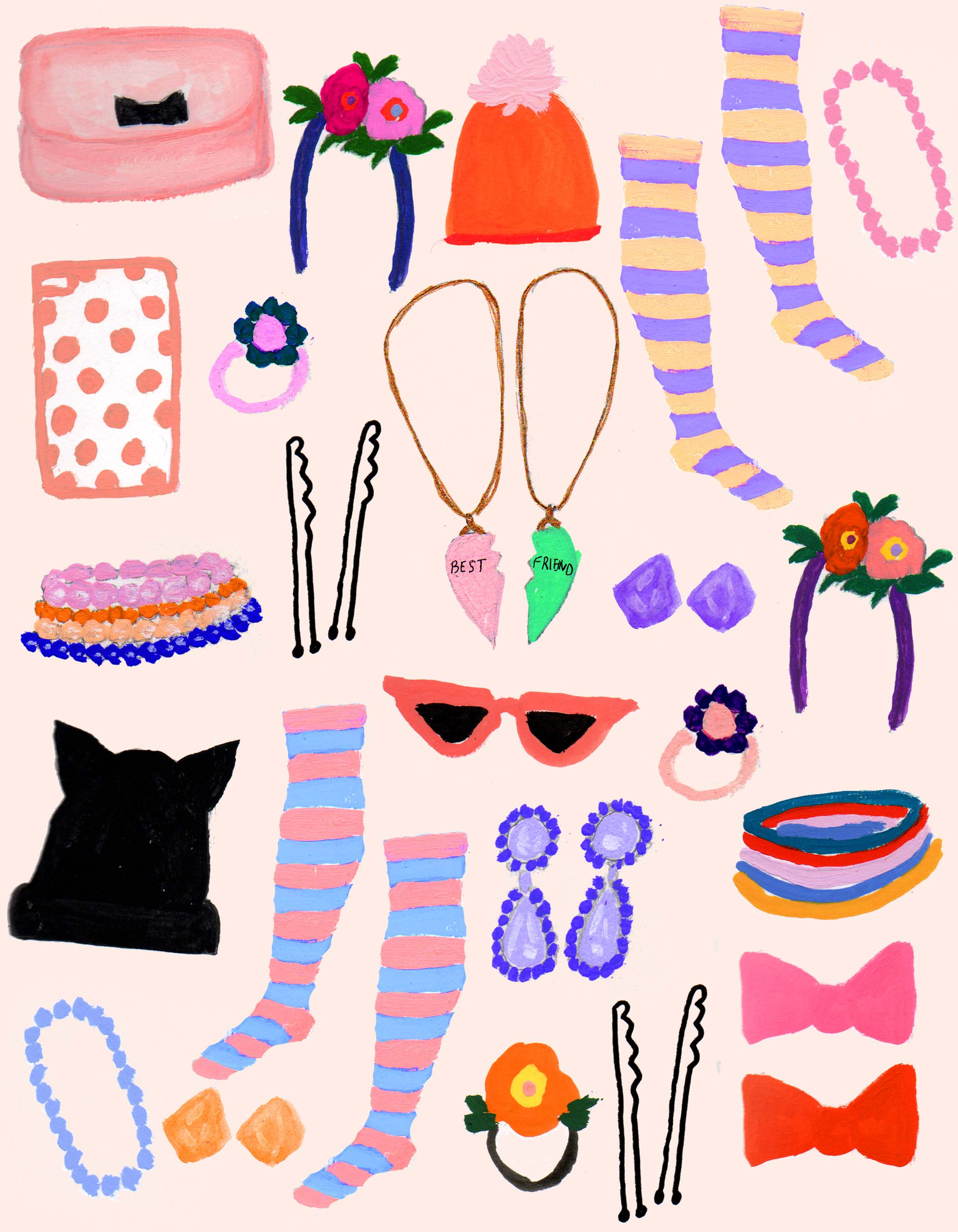 I have always called it Claire’s Boutique. In 2016, the company does official business as (5), but the *classy* boutique will always sound right to me.

My first defining Claire’s moment was getting my ears pierced — second hole — at age seven. Very advanced for a second-grader, but I had one of those cool moms. Claire’s is best known for its costume baubles: sparkling earrings, mood rings, crystal body tattoos. The big shtick was (and continues to be) a free ear piercing when you buy a pair of earrings. I remember (8) and a (1) and considered it all to be sort of expensive even though it really wasn’t. (There were those famous five-for-$10 sales.) I was a child of the Pittsburgh suburbs; Claire’s was my connection to a broader, much cooler world: (9), (2), rave-inspired (3).

And yet, any mention of Claire’s and those sparkly memories quickly float out of my head and my cheeks flush with aggravation. The details are a bit tedious, but all you need to know is that at age 13 I was accused by a store manager of stealing a rainbow-colored beaded daisy chain. I didn’t do it! My moral fibers were wound entirely too tight at that point to attempt any sort of robbery, no matter how minor. I managed to escape somewhat vindicated, but not as much as I would have liked. The woman still believed I stole the necklace, even though my guilt could not be proved.

Minutes after leaving Claire’s, I ran into two other girls from school. They were also on an adrenaline high, but for the opposite reason. They were actual thieves, bragging about stealing beaded rings from the jewelry counter at Macy’s. To get away with it, they popped them under their tongues. I was deflated for the second time in less than an hour. If being accused of stealing weren’t bad enough, I knew those girls had somehow surpassed me. Not only had they intended to steal, they were savvy enough to get away with it. It illustrated that they were ready for life, and boys, and high school. The Claire’s incident reminded me that I wasn’t.

It turns out that, for many, Claire’s was a place for firsts. Your first ear piercing, your first attempt at thievery, your first experience with self-expression, maybe even the first time you pulled bills out of your wallet and handed them to a cashier without the assistance of an adult. “I totally experimented at Claire’s,” my friend Anna says. “Piercing, stealing sunglasses. Also, it was the spot to get body glitter. Remember that? And those gem tattoos.” Bruce Gaslow, a retail executive who spent nearly 20 years of his career at Claire’s, says it was the first place many girls got a taste of independence. “The parents didn’t even walk into the store, they just gave the kid five or ten dollars and let them go in alone,” he remembers. “Nobody really bothered them. They were free to destroy the store! Nobody chased them. It was their place and their time.”

Carlye, a work acquaintance who I wouldn’t mind someday calling my friend, still shops at Claire’s despite the fact she is nearly 30. (10), the target audience is between the ages of 3 and 18). “Their (6) is UNREAL,” she recently wrote me. “It has the world’s best cell-phone cases. I spent almost a year trying to track down the burger cell-phone case she debuted at the VMAs.” Unsurprisingly, Carlye’s Claire’s obsession stems from childhood, when her grandparents once lost her in a mall because she was so entranced by the earring trees that she wandered in without mentioning where she was going.

Most of the people I talked to for this story are effusive in their love of Claire’s, even though they haven’t stepped foot in the store in 15 years. (Carlye aside.) Nostalgia doesn’t sell body glitter, so I was curious to know: What does the brand stand for these days, and how is it surviving? When I was a preteen, there was no H&M or Forever 21. There was no (15). Today, junk jewelry, the cheapo stuff that is Claire’s bread and butter, is as readily available on ASOS as it is at Topshop. Has Claire’s managed to keep up?

Claire’s origins are in wigs, not plastic earrings. (16) was a high-school dropout when he founded Fashion Tress Industries in 1961. This was an era when wigs were almost as trendy as hair extensions are today, and Schaefer clearly knew what was up. In 1973, he bought the hat-store chain Claire’s Boutiques and re-merchandised it to focus on cheap-and-chic jewelry. (The stores still sell fake hair, by the way.) In those early years, Claire’s wasn’t just for tweens and teens. “The two-year-old walking into the store would make a beeline for what we called the Kid’s Club. They knew exactly what they wanted,” Gaslow says. “But there were also old ladies who were buying clip-on and button earrings, bracelets, and necklaces. It was very, very much a family affair.”

By 1990, there were 1,000 stores, mostly in suburban malls like the one I frequented. Schaefer kept acquiring smaller chains — remember Topkapi? Afterthoughts? — but none stuck as much as Claire’s did. The Icing, which he bought in 1996, still exists and is supposed to serve as a grown-up alternative to Claire’s, targeting 18- to 35-year-olds, but the others were all rebranded as Claire’s. In the 1990s, at the height of mall culture, Claire’s boomed for plenty of reasons. Schaefer started franchises abroad, which boosted profits. He also hired employees straight from the retail floor and trained them as buyers.

Additionally, Claire’s had an incredibly tight supply chain. Before the 1990s, much of the jewelry sold in the United States — even junk jewelry — was made in Rhode Island. The loosening up of trade between the United States and China changed that. By manufacturing in Asia, which was much cheaper than manufacturing in the United States, Claire’s was able to make a larger profit on each item. And long before fast-fashion stores like H&M and Zara made their mark on the U.S. market, Claire’s was trend-forward, often flying in-demand items over instead of shipping them via boat. “Claire’s created trends before they were in magazines,” Gaslow says. “If you went into an empty mall at 3:30 in the afternoon, the only two busy spots would be the food court and Claire’s.”

But with the 2000s came companies like Forever 21 and H&M, whose vertically integrated supply chains made it tough to compete. However, Claire’s still did well for most of that decade. In 2002, after their father had a stroke, (11). In 2005, the company made its initial public offering on the NASDAQ. That year, Claire’s did $1.3 billion in sales, and just two years later it was sold to Apollo Global, the private-equity firm, for $3.1 billion in a leveraged buyout, which means that the firm had to borrow a lot of money in order to afford it.

Claire’s has done well abroad. Along with a big presence in France and other parts of Western Europe, it has expanded into Eastern Europe, opening its first store in Ukraine in 2010. At the end of January 2015, the company counted 1,837 stores in North America and 1,161 in Europe, most of which were company operated. But sales were only $1.5 billion in the company’s 2015 financial year, down slightly from the years previous. Sales peaked in 2013 at $1.6 billion. In its most recent quarterly report — filed on December 4 — sales were $333 million, down 5 percent from $351 million during the same period last year.

What that means: sales really haven’t grown much since the company was acquired a decade ago.

I emailed Claire’s in-house public-relations manager and requested an interview with the company’s current chief executive officer, Beatrice Lafon, to discuss her plans for the company. Installed in 2014, Lafon, who hails from the UK, has an impressive résumé: she’s worked at big British retailers like Marks & Spencer and River Island, and started at Claire’s in 2011 as its European president. She moved her family from the UK to Chicago, where the company is based, to take the (12).

I couldn’t ask her about the move — or her plans for Claire’s — because I was denied an interview with her. The company did, eventually, answer some questions for me on background.) Luckily, there is plenty of information about the company on its corporate website and even more in the financial documents it files every quarter with the Securities and Exchange Commission (SEC). Though Claire’s is no longer a public company, it has a lot of debt ($2.4 billion) and many shareholders, which means it still needs to report its earnings.

Today, Claire’s says it’s still the No. 1 ear piercer in the world, piercing about 3 million customers globally each year. It certainly seems to have a foothold on that particular service. Other than (7), which you might have noticed set up at a kiosk in the middle of your local mall, nowhere else feels as safe when it comes to getting a simple piercing. Sure, semifamous piercer J. Colby Smith, who works at Love Adorned in the East Village, might be poking holes through the cartilage of your cool friends on a regular basis, but your cousin in Scranton doesn’t have that option.

> Today, Claire’s says it’s still the No. 1 ear piercer in the world, piercing about 3 million customers globally each year.​

A little less than half the business is jewelry. Styles currently for sale include a cutesy winky-face-emoji ring ($5.50), a more sophisticated crystal-flower statement necklace ($24.50), and a Dior-esque crystal ear cuff ($9.50). The rest is accessories, like Beanie Baby key chains ($5.50), textured snood scarves ($12.50), and winter hats that say things like #SELFIE in reflective lettering ($14.50). Almost every price ends in 50 cents. In the 1990s, Claire’s used to do big business with hair accessories: scrunchies, mostly, but also butterfly clips and headbands. Save for the #SELFIE references and modern descriptors like “statement” in front of necklaces, the products don’t look that much different than when I was 13.

In an interview with the *Chicago Tribune*, Lafon acknowledged that Claire’s must transform in order to compete. “We were failing to reinvent ourselves for the 21st century, failing to change with the times, and quite frankly got left behind by the customer,” she told the paper. It’s true.

Part of that has to do with Claire’s reliance in North America on malls. Today, we like to shop at outdoor centers or online. (4) to read all about the decline and fall of the American mall.) To combat that, Lafon is opening concession shops — or shops-in-shops — in Toys “R” Us, where she can target the youngest of her young customers. Part of it also has to do with the company’s failure to embrace digital: it launched e-commerce in North America only in 2011, and in Europe in 2013. But most of it has to do with the thing that has affected those other specialty retailers that were so successful at the mall when I was growing up in the 1990s. Fast fashion has transformed not only the way we shop, but also our expectations. A 10-, 12-, 15-year-old who likes cool shit expects cool shit. And she knows that she can get it at Forever 21.

That, clearly, is no longer the case. But for those who have an affinity for the place, it would be nice to see Claire’s inspire once again. Gaslow, the Claire’s vet, says that when he asks girls today where they like to shop, they often say “online.” Otherwise, the answer is Justice, a fast-fashion store for preteens. (You might know it by its previous name: The Limited Too.) Perhaps the independence we sought combing through those earring trees and ring stands can now be found through URLs and comment boards. And yet, the need for Claire’s — or at least something like it, something that offers a special sort of autonomy in such an uncertain time in a woman’s development — still feels real. After all, where else would little girls get their ears pierced?