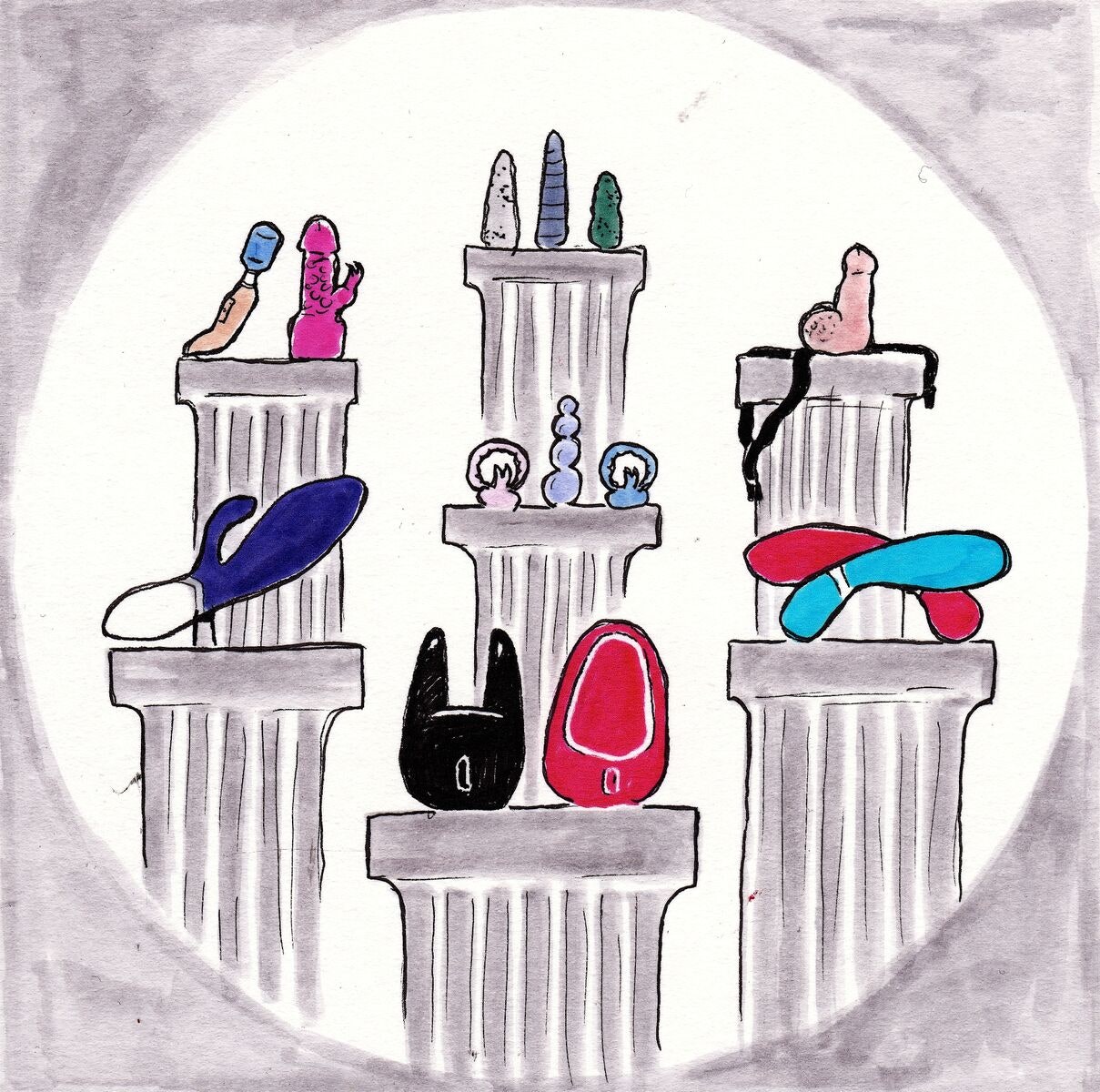 Squat, round, and colorful, at first glance (17) looks like paperweights or designer toys, the kind of thing you’d pick up at the MoMA Design Store for a playful friend or particularly precocious child. (12) looks like it has bunny ears; (6) seems more aquatic-inspired, with two silicone petals emerging from a cylindrical base. Press a button, and each whirs to life with a gentle buzz — yes, they’re designer toys, and they’re meant to go on your privates. Or, you know, wherever.

“Our Form line is named that way so that each customer can envision it how they want,” said Carolina Formoso, an industrial designer at Jimmyjane. Form 2’s bunny ears contain a motor each, resulting in extra-powerful vibrations for whatever occupies the space between, be it clitoris, nipple, or perineum. The pocket-size toy (Jimmyjane’s best-selling product) is small enough to hold between two bodies, buzzy enough to get a person off on its own, and abstract enough to leave on the nightstand. The Form series, in this abstraction, offers a blank slate. Its design doesn’t dictate who uses it, where they use it, or who they use it with.

I’ve never believed that sex with a partner has anything to do with orgasms, perhaps because I figured out how to get myself off while relatively young. Though sex and orgasms were known to converge, sex seemed to be mostly a complex social interaction, fraught by the convergence of my own emotions and other people’s feelings. Achieving solo orgasm was largely mechanical, initially thanks to the ever-reliable tag team of my first and middle fingers. Later, after I was old enough to buy one, I got the job done with the assistance of a matte purple vibrator. It was six inches long and multispeed and branded — somehow, this didn’t bother me — by *Hustler*.

> Achieving solo orgasm was largely mechanical, initially thanks to the ever-reliable tag team of my first and middle fingers.

Thanks to mentions in pop culture like the appearance of Vibratex’s (19) on *Sex and the City*, as well as a growing understanding of personal sexual agency, sex toys have been mainstreamed. Though toys must either be classified by the FDA as medical devices — generally a long and difficult process — or else sold as largely unregulated novelties, high-end brands like Jimmyjane, Lelo, Fun Factory, and others have been credited with bringing legitimacy to the sex-toy market, as well as approachability.

Palatable, discreet design has been a large part of the industry’s acceptance. “Design has been used to make these products more approachable to a broader audience,” Jimmyjane’s Formoso wrote to me. “I would say our design ethos is very minimalist, modern with an emphasis on innovation and technology.” The company’s aesthetic is reflected in its lineup of sleek, discreet products, which have names like (3) and (4), referring to classic toy shapes, and the aforementioned Form series, the shapes of which don’t reference human anatomy at all.

Lelo, a luxury toy brand, also takes a minimalist approach, because the company believes it’s most effective. “Most of our pleasure products are kind of anatomical abstractions,” said Steve Thomson, the company’s chief marketing officer. “They don’t directly reflect nature: they interpret it, recode it, and improve it, depending on the intended purpose of the product.” For example, a toy meant for insertion will be necessarily somewhat phallic, but the shape of its head can be adjusted to provide a specific internal sensation — tapered for one experience, broad and flat for another. It helps, of course, that this minimalism also prevents sex-toy newbies from shying away from their products.

> It helps, of course, that this minimalism also prevents sex-toy newbies from shying away from their products.

Designers cite user experience as their initial impulse for toy design. “One of the most challenging things about designing for sexuality is that there is no ‘one size fits all,'” said Formoso. “Sexuality is also objective, and different people interpret and experience pleasure differently.” Formoso cites market research as integral to the development of new products. “We then look at technology, ergonomics, and the marketplace to understand what is missing and how we can enhance that experience at the consumer level.”

Thomson told me about the design process behind Lelo’s Wave series. The distinctive “come-hither” motion of each of the toys was envisioned after the first model of the (9), a stylized rabbit vibe, was made. The (16) didn’t have the come-hither gesture, as there wasn’t the technology, but it looked like it could. This curling movement, of course, comes from the experience of partnered sex — manual stimulation, and probably manual stimulation fairly similar to the kind doctors and midwives used to get “hysterical” women off in the Victorian era. However, in Lelo’s care the movement has been mechanized and transformed into something not human-looking but not quite uncanny valley, either. While developing the follow-up, Thomson told me, “We discovered that we could make the technology ourselves … So sometimes the idea leads the technology, and sometimes the technology leads the idea. It’s symbiotic.”

Despite their industrial design origins, sex-toy manufacturers must inevitably contend with the thicket of sex, gender, and relationship dynamics that surround their product. Jimmyjane opts for a gender-neutral approach to its branding: “We aren’t dictating whether the product should be thought of as female or masculine within the name,” said Formoso.

At Lelo, “We’ve found that the best way to engage with different sexual, gender, and relationship dynamics is to remove all of them from our creative process as much as realistically possible,” said Thomson. While perhaps that holds true for the design and manufacturing process, Lelo’s marketing is rigidly heteronormative. For example, one of the brand’s couple’s toys, (5), is packaged with a “user guide” that includes (admittedly very tasteful and sexy) illustrations of a straight couple in various positions. The toy itself could function in a number of different positions and orifices, but you wouldn’t know it by looking at the marketing material. Such user guides are crucial points of entry for first-time consumers, and though I’m sure many seasoned queer couples have already co-opted the Ida for their own pleasure, I wonder how many more people were dissuaded.

> The toy itself could function in a number of different positions and orifices, but you wouldn’t know it by looking at the marketing material.

It’s a mistake for brands to ignore the queer community, which makes up a large proportion of sex-toy consumers. Much of the industry’s biggest strides come from the queer community — for example, New York Toy Collective is a queer collective completely revolutionizing dildo and strap-on technology. And many of the industry’s most vocal supporters (and critics) are queer sex-toy reviewers, like (10) or the (11) community, whose public blog posts explain the variety of uses a toy can have and suggest ways to make toys better. Though they’re explicitly tied to pleasure, sex toys also remove the body in large part from that pleasure; they are objects weighted with as much or as little association as we choose to imbue them with.

Sex toys have always existed to allow people, particularly women, to take control of their pleasure, regardless of who it is or even whether they have a partner. For me, they represent an unimaginable array of ways to feel good, and better. So why not remove the restrictive marketing surrounding their inventive design, so that we can more thoroughly embrace all possible avenues of pleasure?

*Larissa Pham is an artist and writer in Brooklyn.*