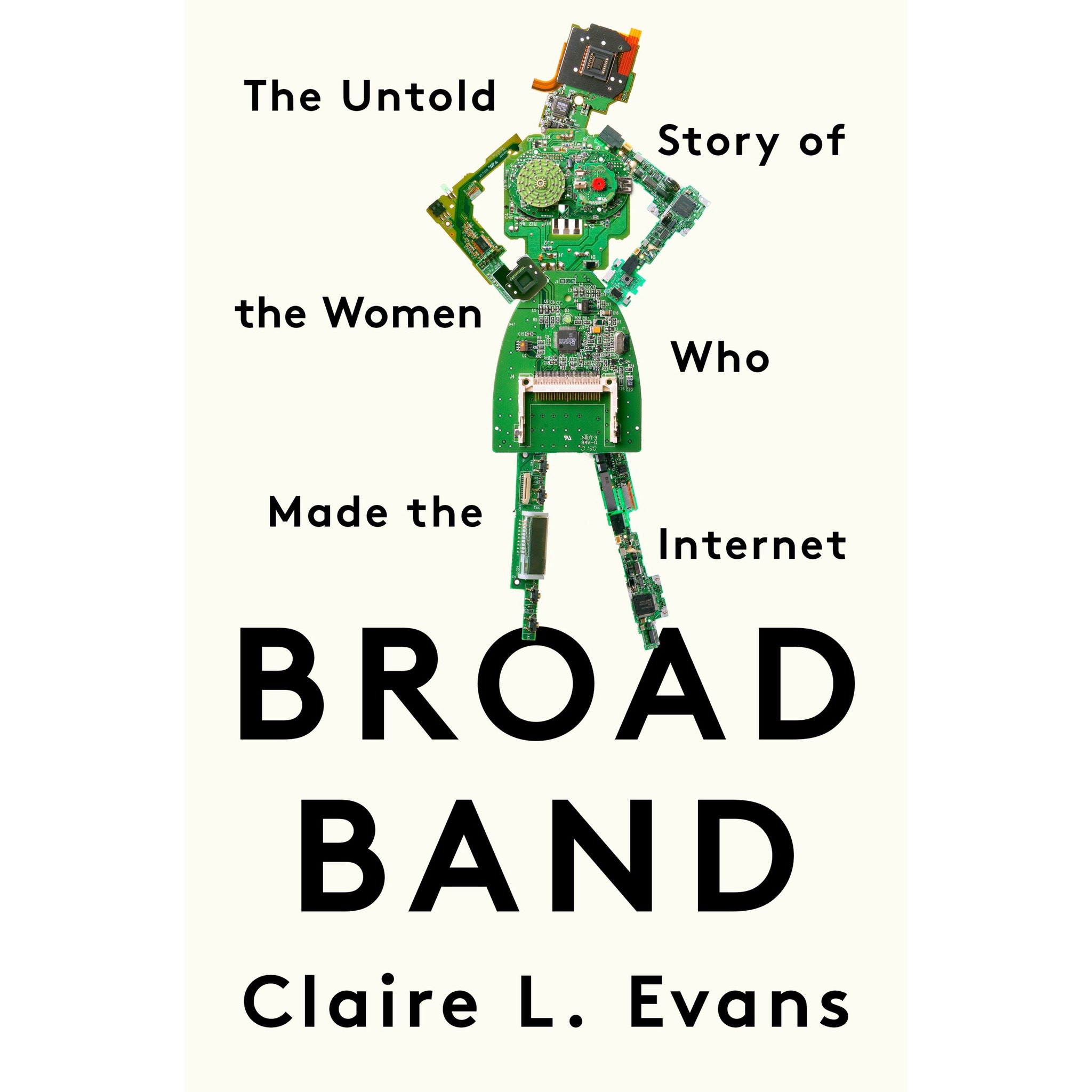 Radia Perlman, who wears her long gray hair parted straight down the middle and speaks with a beatific, smiling calm, really hates it when people call her the “Mother of the Internet.” Still, she can’t seem to shake the title. Radia, like a lady radio.

In the early ’70s, Radia was one of only fifty women in a class of nearly a thousand at MIT. In coed housing, she was the resident female, an oddity. She never saw any other women in her math classes. When she did glimpse one in a campus crowd, she’d just think, “Gee, that person looks out of place” before remembering how she might look out of place, too, if only she could see herself.

At Radia’s first programming job, the male programmers she worked with would “do things intended to be friendly and to impress me,” like sitting around her as she worked, pointing out everything she was doing wrong. The dynamic made her self-conscious to the point of diverting her professional path: as an undergraduate, she designed a system for teaching programming to children using tactile controllers and buttons, inadvertently creating the field of tangible computing, but she gave it up because she worried that having “cute little kids” around would mean she’d never be taken seriously as a scientist.

Although Radia was just an undergraduate, she stuck out for staging a feminist action at the AI lab, where she worked alongside those nosy male programmers. “She was busy freeing the johns,” says Elizabeth Feinler, who ran the central information office of the early Internet, the ARPANET, and crossed paths with Radia in those days. “The women had to go down a couple of floors to go to the john and the men’s john was on the same floor as the computers. I thought that was an interesting concept, liberating the johns.” Radia tells me it was nothing so revolutionary, she just put signs up, “saying something about, ‘this bathroom does not discriminate based on gender, height, or any other irrelevant properties.’ ” She was the only woman in the lab, but they still made her take the signs down. Many years later, when she was a distinguished fellow at Intel, she’d truthfully tell visitors that she had her own private restroom. They’d be impressed, until one saw her walk into the women’s restroom. “The more senior you get, the fewer women there are,” she says.

Radia’s mother had been a computer programmer in the age of punch card machines, and wrote one of the earliest assemblers while working for the government. When Radia was a kid, it was her mother who helped her with math and science homework, but Radia didn’t inherit her love of hardware. “I wanted nothing to do with computers,” Radia says. She preferred logic puzzles and music, and although she excelled in school, she secretly fantasized that a boy would beat her in math and science someday. “My plan was to fall in love with him and marry him,” she says. That never happened. Instead, she was first in her class.

Radia’s very first contact with computers, in high school, was through an extracurricular programming class a dedicated teacher had arranged for her. She discovered that all her fellow classmates had been taking radios apart since they were seven, and they knew fancy computer words like “input.” She felt like she’d never catch up. “I never took anything apart,” she says. “I would have assumed I would break it, or get electrocuted.” In her introductory computer science course at MIT, the lab returned her first program with an angry note. She’d done something terribly wrong, sent the computer into a loop, and wasted reams of paper. To this day, Radia calls herself a last adopter, and although she did eventually crack programming, she gave it up in the 1970s. She has been told, again and again, the same myths we’re all told about what it takes to be a good engineer: taking electronics apart from a young age and focused, borderline obsessive attention to technical details. “Certainly, people like that are very valuable,” she tells me, “but they’re not able to do the things that someone like me can do.”

Radia designs routing algorithms: the mathematical rules determining the flow of data across a network. She broke into the field when she dropped out of graduate school to take a job at Bolt, Beranek and Newman, where she fell in love with networks but was so consistently ignored by her coworkers that she once gave an entire presentation about the solution to a difficult, unsolved routing problem, only for the man running the meeting to announce that there was a difficult, unsolved routing problem he wanted everyone to solve—the very problem to which she’d just presented the solution. She was hurt but unsurprised. Fortunately, a representative from the Digital Equipment Corporation, DEC, approached her after the meeting. “He said, ‘Are you happy professionally?’ And I said, ‘I guess so.’ And he said, ‘You were just completely ignored, didn’t that bother you?’ And I said, ‘No, I’m used to it. Everyone ignores me.’” He offered her a job on the spot.

When she worked at DEC in the ’80s, it was still so normal for programmers to chain-smoke in their cubicles that it took Radia three years to realize that she was allergic to cigarette smoke. “I always had the world’s worst cold,” she says. “Wherever I went, I had to carry a wastepaper basket and a large box of tissues and was just disgustingly blowing my nose constantly—this horrible loud sneeze you could hear all over the building. One time, I kind of walked in and I sneezed, and someone said, ‘Oh, Radia’s here.’” When she finally went to the doctor and realized she wasn’t even sick, she threatened to quit, but they sent her to graduate school instead. When she came back, DEC had fixed the smoking problem “by issuing a memo saying, quote, ‘Don’t smoke in the building,’ unquote,” Radia says, and laughs. Back on the job, she invented protocols that would have an indelible effect on the robustness and stability of all computer networks.

Radia thinks conceptually, and when she describes her approach to her work, she calls it “stepping outside of the complexity of a particular implementation to see things in a new way.” By removing extraneous details and focusing on one thing at a time, she says, she’s able to find the simplest solutions to complex problems. And because of her earliest experiences with programming, she values ease of use above everything else. “I try to design things that someone like myself would like to use,” she explains, “which is that it just works, and you don’t have to think about it at all.”

In 1985, Radia was at DEC. At the time, Ethernet—a technology for networking computers locally, as within a single building—was becoming a worldwide standard, threatening to replace some of the more complex protocols that were Radia’s specialty. But Ethernet could properly support only some hundred-odd computers before the packets of information traveling around the network started to collide and interrupt one another, like a bad conference call. This meant it could never really scale. Radia’s manager at the time tasked her to “invent a magic box” that would fix Ethernet’s limitations without taking up an additional iota of memory, no matter how large the network was. He issued this decree on a Friday, right before he was to leave on a weeklong vacation. “He thought that was going to be hard,” Radia says. That very night, Radia woke up with a start and a solution. “I realized, oh wow—it’s trivial,” she says. “I know exactly how to do it, and I can prove that it works.” Like all the best innovations, it was simple. The packets couldn’t all travel on the same path without stepping on one another, so there had to be unique paths between every computer in the network. These paths couldn’t loop—no doubling back on the journey from point A to point B. Radia’s algorithm automatically created routes for each packet based on a spanning tree, a kind of mathematical graph that connects points to one another with no redundancies. Not only did it solve the Ethernet problem, but it was also infinitely scalable and self-healing: if one computer in the network goes down, as computers are wont to do, the spanning-tree protocol automatically determines a new route for the packet. This is Radia’s signature touch. She designs systems that run with minimal intervention, through self-configuring and self-stabilizing behavior. This approach makes a large computer network like the Internet possible. As she said in 2014, “Without me, if you just blew on the Internet, it would fall over and die.”

Radia took the rest of the weekend off after inventing the spanning-tree protocol. She wrote up the specifications on Monday and Tuesday. Her manager was still on vacation, and because this was long before people checked their e-mail every waking hour, Radia couldn’t share the accomplishment with him. Unable to concentrate on anything else, she decided to write a poem.

She went to the library, looking to borrow the opening line—“I think that I shall never see / A poem lovely as a tree”—from a Joyce Kilmer verse her mother had loved. “The librarian vaguely remembered the poem, too,” she says, but they could find only a brief reference to it in the encyclopedia. So Radia called her mother, the former programmer who had helped her with math and science schoolwork throughout her childhood, and asked her to recite it. Her mother had an ironclad memory. “She said, ‘Certainly,’ and she quoted it to me over the phone.” From this, Radia adapted her spanning-tree algorithm to verse:

I think that I shall never see
A graph more lovely than a tree.
A tree whose crucial property
Is loop-free connectivity.
A tree that must be sure to span
So packets can reach every LAN.
First, the root must be selected.
By ID, it is elected.
Least-cost paths from root are traced.
In the tree, these paths are placed.
A mesh is made by folks like me,
Then bridges find a spanning tree.

When her manager returned to work the following Monday, he found two things sitting on his office chair: the spanning-tree protocol specifications and the poem, which has taken on mythical dimensions in network engineering circles. Many years later, Radia’s son set Algorhyme to music, and Radia and her daughter, an opera singer and violinist, performed it at MIT’s Lincoln Laboratory. As for the spanning-tree protocol, it transformed Ethernet from a limited, localized technology into something that could support much larger networks, and it is now fundamental to the way computers are networked. It’s Radia’s most famous, although by no means her only, contribution to networking. Her work might be invisible to the everyday user, but it’s invisible in the way that laws are invisible or the rules of traffic in a busy city are invisible: it directs the flow of information at a layer beyond our conscious awareness. “If I do my job right,” she explains, “you never see it.”