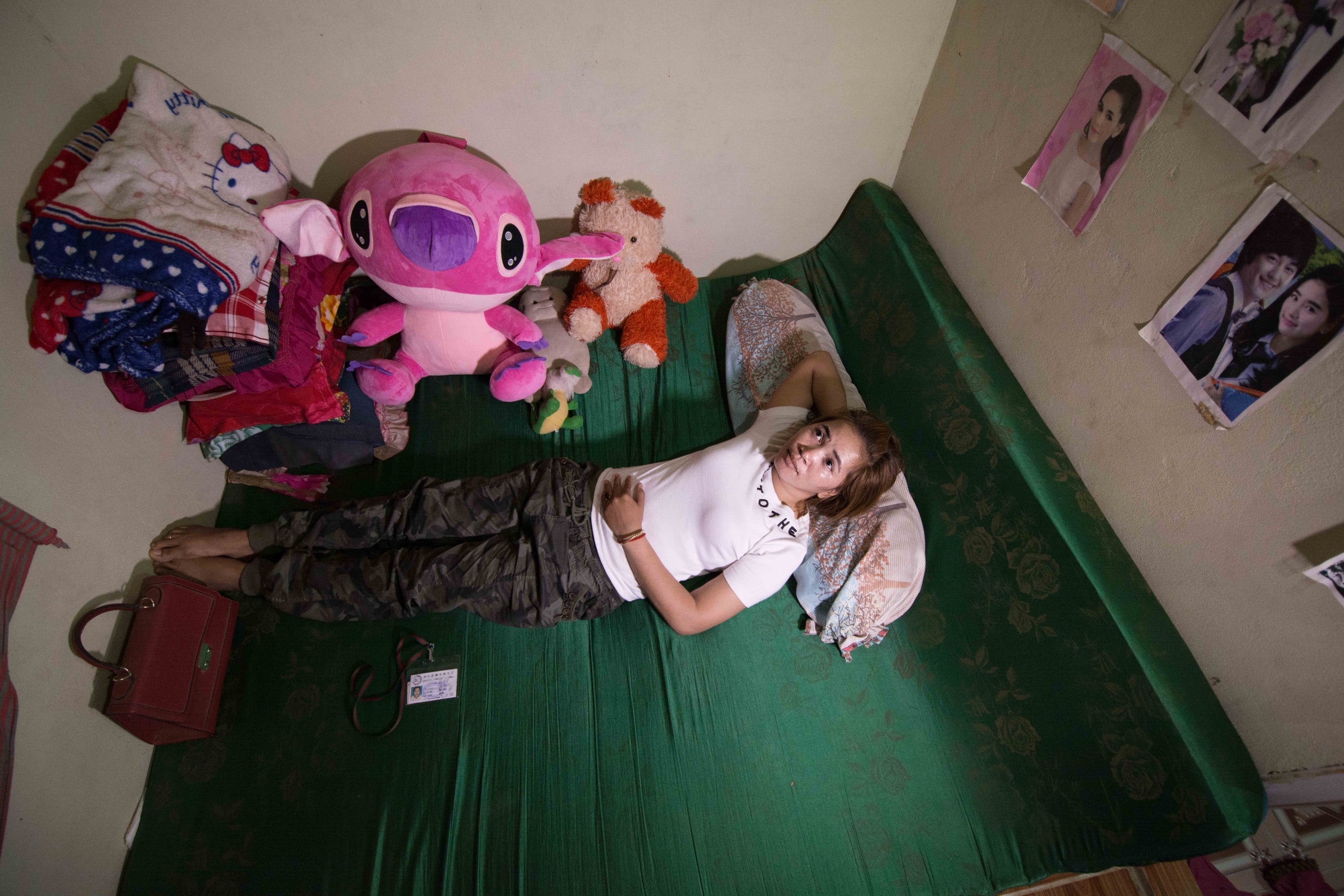 Nary is a 24-year-old Cambodian garment-factory worker in the capital city, Phnom Penh. Her parents are rural fruit farmers, and, at age 17, she started working in the factory to support her family. She met her first boyfriend there. They fell in love, started having sex — in a country where premarital sex is quite taboo — and a few weeks later, she missed her period. When she told her boyfriend she was pregnant, he left her. Unaware of safe birth control and safe, legally available abortion methods, she bought an unknown pill from a shop a friend recommended. It left her in the hospital, heavily bleeding and in pain. She missed a week’s worth of wages. After another failed relationship and pregnancy scare, Nary reported feeling depressed and hopeless when she joined a program called CHAT! Contraception, which provides sexual-health education for young factory workers.

More than half a million young women work in Cambodia’s factories. Most are poor. Many have no more than a primary-school education. And a lot of them, like Nary, are vulnerable to unwanted pregnancies, increased rates of STDs, and unsafe abortions. It’s their first time away from home, when they form new relationships and begin their first sexual experiences.

(1) — one of the world’s largest humanitarian organizations, where I serve as innovator-in-residence — launched Chat! Contraception to empower young women factory workers like Nary to make informed, healthy sexual choices.

The program uses a blend of soap-opera-style videos of Cambodian factory women facing critical sexual choices. Chat! delivers those videos through in-factory screenings and via mobile devices. It also facilitates trust-building sessions in the workplace, along with a mobile app that provides once-daily quiz questions with the opportunity to build points and raise your rank within the game.

The early results have been remarkable. So far, Chat! has reached 15,000 workers at factories serving big Western brands like Levi’s and Marks & Spencer. Rates of modern contraception use among sexually active factory workers have doubled, reaching nearly 50 percent. Unwanted pregnancies have declined, and women in the program report that their confidence in discussing contraception with their partners — and even in refusing sex altogether — has tripled.

I spoke with Maly Man and Julia Battle, co-founders of Chat!, who are based in Phnom Penh.

__Tell me a bit about the typical female garment-factory employees you work with?__

Most of the factory workers are women who typically move from their rural villages when they are still teenagers to find work. The average age of workers in the factories is around 27. They come here with little education, limited literacy, no sexual-health knowledge. And what they’ve learned, they hear through the grapevine of their friends in the factory — who also may be misinformed.

Around 50 percent of women in the factories report being sexually active, but it is hard to know how many who are not married are willing to report having sex. There is a huge stigma around it — that’s part of why we wanted to create safe online and offline spaces for learning and conversations.

__What does a typical workday look like for the women in the program? How do they have time to participate?__

The typical workday in the factory is 7 a.m. until 4 p.m., with a lunch break, six days per week. But whenever possible, most of the women will add an overtime session from 4 to 6 p.m. The minimum wage in Cambodia is U.S. $153 per month. If they always work those overtime hours, they can come closer to U.S. $200 per month. Some of the women are living in small individual rooms in boardinghouses that are walking distance from the factories. A lot of women — especially those with husbands and kids — live farther away so they can have more space. There are these big trucks that pick up women along the route to the factories. With all the traffic, maybe you wake up at 5 a.m., commute for 90 minutes each way, and get back home around 8 p.m.

Long days made the mobile-phone component of the program really important. The workday is very busy, and it is very hard to grab time with the workers. Time is money — we want to be available on their schedule. Now they can watch the videos on YouTube whenever they want, and they can choose what time each day they want the mobile-quiz questions delivered.

__You’ve mentioned that a lot of the women enter the program with major misconceptions about sexual health. What’s one example that sticks out for you?__

Here’s a big one — abortion is *legal* in Cambodia, but only 11 percent of women in the factories report knowing it is legal. The vast majority believe it is illegal!

The impact of so many women (and men) thinking abortion is illegal here is that when women do need abortions, they rely on unsafe, outdated methods. Many women will visit unlicensed practitioners to give them surgical abortions, or they will use something popularly called the “Chinese pill,” packets that may contain some of the effective drugs, but in incorrect and variable doses. Otherwise, they might buy a licensed abortion pill from the shop but then will use it incorrectly. For instance, you are supposed to take one pill orally, wait 24 hours, and then insert four pills, but they might mix these up, take them incompletely, or not take them at the right time.

Thai dramatic movies are some of the most popular video content for women in the factories — they watch a ton of movies. And in Thailand, abortion is illegal and often comes up in the story lines, so sometimes that is confusing. But the need for abortion in the first place is also due to this community having limited understanding about effective birth control.

__What are some of the misconceptions around birth control?__

One very popular misconception here is that if you haven’t ever been pregnant, if you use birth control, it will make you infertile, and you will never be able to have children. Another one is around IUDs and implants — that they will float out of your uterus or your arm and roam dangerously around your body forever.

Also, many women in the factories don’t know about any of the side effects of birth control because they have never talked to a health practitioner and will just get the pill at a local pharmacy. So, they’ll experience side effects and panic. Side effects for contraception are very real — they have to be acknowledged, not ignored. Even in the Western world, if your contraception feels horrible, and you don’t understand why or how long they might last, that is really scary, and you can be sure you won’t keep using the method.

__Are men part of the conversation?__

We don’t only work with female workers; we now have a separate program for their male counterparts. We noticed that a lot of women in the program would schedule their mobile-phone quiz to be delivered around 8 or 9 p.m., when they would be home with their partner and they could answer the questions together. And even though the workplace sessions were intended for women, men working in the factory were showing up to watch the videos because they are fun, but also because they have questions! It’s easier for women to have conversations about sex and contraception when their partners are familiar with accurate information also.

__Does the content focus only on unplanned pregnancies or also on STIs?__

STIs are a big issue at the factory — both absolute numbers of women contracting them and the ability of the women to identify and seek treatment for them. For instance, it’s hard to know if maybe they feel uncomfortable because it is just a yeast infection. They are sitting working in the factory ten hours a day in temperatures well over 100 degrees Fahrenheit. Or maybe they are menstruating and they’ve used the same sanitary products for a half-day or a whole day, which happens a lot.

Women in the factories might feel uncomfortable but won’t go to their local or factory-provided health center because they do not feel comfortable having their bodies looked at or touched by men.

One of the features of Chat! is that we provide a directory of local health-care centers that includes information on which centers have female practitioners that can treat them.

__How do the training sessions move from just online or within the factories to the outside world?__

We are trying to push boundaries both emotional and physical — in terms of where women feel comfortable going and who they feel empowered to talk to. So, for instance, we do treasure hunts — maybe the first day you just use your cell phone to call a sexual-health hotline and ask a question, then a few days later you have to take a picture with your phone of a place that sells condoms, and then to complete the treasure hunt, you actually need to go into a clinic and have a conversation. Each step feels like a big one sometimes.

*If you want to form your own fundraising team and support CARE’s work around the world, sign up for (2) and walk in solidarity with women and girls worldwide.*