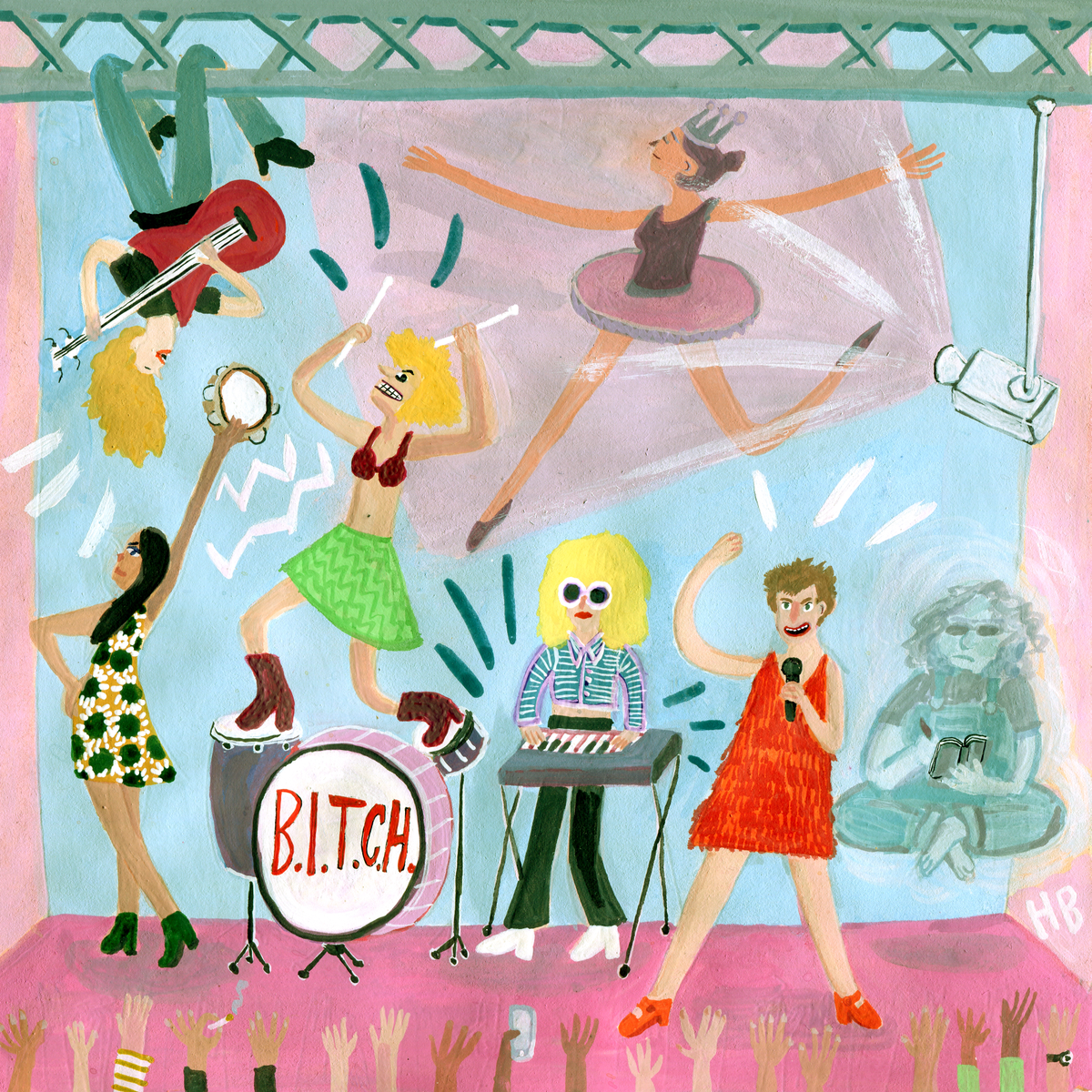 I’m no loser. I’ve been invited to Coachella before. Plenty of people have looked at me, pasty and winded from a short walk to my local cheese shop, wearing a full Patagonia fleece suit in July, and thought, *Fuck yeah! That’s the person I want to share my Indio, California, sex yurt with*. My rampant fear of (1) and my refusal to eat any food I haven’t seen exit the package makes a desertscape full of porta-potties a dream destination for me. And my ability to rock a feathered headband to Palm Springs, just like my grandpa rocked his yarmulke right outta Hungary, makes me the ideal addition to any festival Snapchat.

So yeah, all the girls have asked me: Kendall Jenner, Ashley Greene, V. Hudg, Julianne H., Victoria Justice, and Dianna Agron’s sister. And I’ve always said, “Thank you so much, but if and when I go, I’m there to *fucking perform*.”

And that’s why this year is so special. Because, like Beyoncé before me, I have been secretly developing a music/movement project that will explode brains across America *and* the Netherlands. It’s not a band. It’s not a dance troupe. It’s a social ®evolution, and we’re called B.I.T.C.H. ( **B** enevolent **I** ncarnation of **T** he **C** unt in **H** armony).

Yup. This year at Coachella, I will be joined by five of my soul sisters: Debbie Wasserman Schultz, Jill Biden, Cindy McCain, Kamala Harris, a Tupac-style hologram of Maria Tallchief — plus the spirit of Andrea Dworkin, who writes most of our original lyrics.

For those of you who need a little primer on who we are when we’re NOT members of a popular Pussycat Dolls–esque supergroup, here you go:

Debbie Wasserman Schultz is a proud Florida Congresswoman; the mother of Shelby, Jake, and Rebecca; and, oh yeah, she chairs the Democratic National Committee. She has the enviable hair of a first-season Felicity and her performance style most closely resembles a young Iggy Pop. There are times I’ve actually had to ask her to leave some room on the pole for the rest of us.

Jill Biden is, of course, the vice First Lady and a tireless supporter of our nation’s troops. She is elegant, self-assured, and principled, but we really just chose her because in the 1970s she did some light modeling work in Wilmington, Delaware, and frankly this band is not going to get anywhere without a blonde who can handle keyboards/synth. She’s like Cherie Currie in St. John knits, and America is NOT ready for her.

Cindy McCain, wife of John and heiress to the Anheuser-Busch fortune, was a last-minute addition. I didn’t know how much we’d have in common, aside from a forbidden love of class-C drugs — she’s kind of anti-choice-ish or whatevs — but it turns out she is a ferocious opponent of human trafficking and an even more ferocious percussionist. Cindy can also do a flying split, which is necessary for our deconstructed take on “Lady Marmalade.”

Kamala Harris may be the attorney general of California with (2), but when it comes time for us to practice, you can call her the attorney general of B.I.T.C.H. because she is a taskmaster who always keeps us focused and on message. In fact, last week, when my blood sugar dropped almost two points, she brought me a Twinkie and was like, “See this? This isn’t a given. This is EARNED. Now show me what you’ve got one more time, and then you can have a bite.”

It was the best Twinkie I ever tasted.

Maria Tallchief isn’t that appreciative of how much time and money we spent creating her hologram. She also seems to think that juuust because she was America’s first prima ballerina and the first Native American to hold the rank that she can sit in the corner working on her Bitmoji and acting like we don’t have MAJOR CHOREOGRAPHY TO LEARN. As if having died in 2013 is some kind of excuse. (Btw, she’s gonna flip when she sees all the Scream Queens in Pocahontas-inspired onesies, and I don’t blame her.)

Good thing we have Andrea Dworkin’s spirit reminding us that every man (and man-loving woman) at Coachella and beyond is simply waiting for us to fail and we cannot let the forces of masculine oppression keep us from getting a great Pitchfork review.

A lot of people are probably gonna wonder: *Why this band? Why these women? Why now?* We as a group felt the best way to stifle the red tide of misogyny and divisive feminist in-fighting that has overtaken our country during this heated presidential primary was to head to Coachella and perform a set that will make all the Pretty Little Liars dance till they have to be taken to urgent care for dehydration. What says unity like a cover of “U.N.I.T.Y.,” and what says, “We demand to be heard on the issues that matter to us, that matter to all women” like a full-scale pop-n-lock number set to k.d. lang’s “Constant Craving,” with Cindy McCain harmonizing sweetly with special guest P!nk?

So when you see us walking up to the stage like a beautiful murder of crows, bedecked in ripped booty shorts, floral crowns, and pasties of Frida Kahlo’s face over each blessed nipple, please remember what we stand for: women lifting women, the freedom to have dissenting opinions without being labeled a traitor to the feminist cause, AND the deep hope that Rihanna might give us a spot opening for her on the *ANTI* tour. We heard the nation when the nation shouted at us: B.I.T.C.H., please!

*Lena Dunham has never Googled the collection of words “Coachella fashion roundup.” No, she certainly has not*.