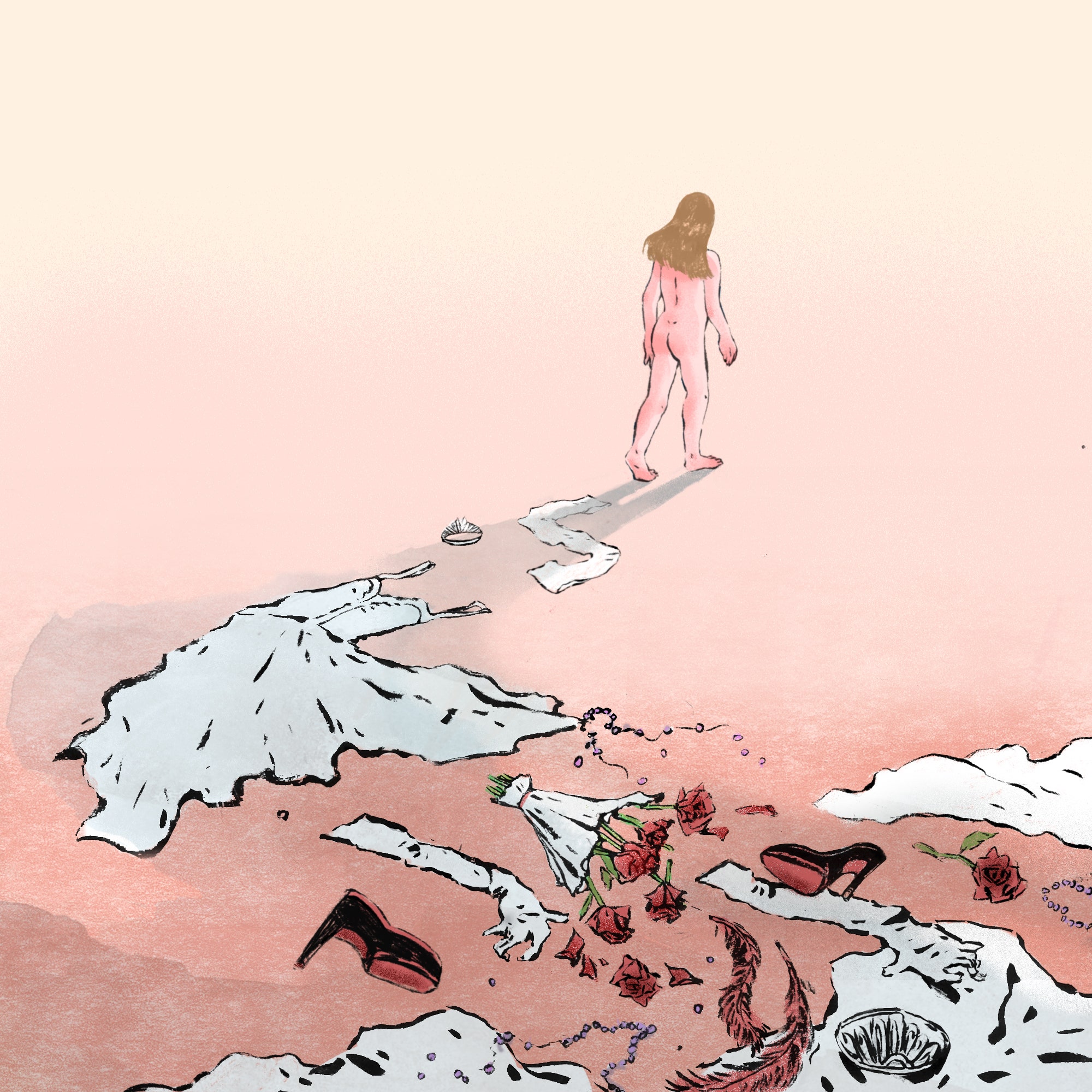 We sat around on folding chairs, pinning ostrich plumes into one another’s hair, sharing college gossip. Near the door that led into the bowels of the Municipal Auditorium, our chaperone was shouting about curtsies — demonstrating, in her tight satin skirt, how we were to bend at the knees without bowing our heads. Our bodies must not betray one trace of submission, she said; we were debutantes, not subjects, after all. Her breath — tuna-laced, necrotic — tossed our feathers. They bobbed as if they were in the bridles of carriage ponies. This felt apt.

My father was offered goats for me once at a dinner party Uptown. The host’s friend, just back from a stint for Shell, had a son as yet unmarried; he thought we’d be a good match. A camel and four goats was the right price, he said, for a basic model like me, but, given what my daddy had paid for my schooling, maybe an Arabian horse should be thrown in too.

He laughed, looking down my dress. I took my mother’s scarf from her chair. My father, bless him, barely chuckled before he started talking. My father has a talent for talking; he can go on for hours about things that interest no one but himself: circuit-court rulings, collegiate a capella, etymologically incorrect usages of common words. That night, huddled under the coral pashmina, I didn’t even try to interrupt so that, by the time dessert arrived, the rest of the table had forgotten about the goats.

My father chuckled again as he took my arm and lead me to the dance floor of the Municipal Auditorium, through a tunnel, into the spotlight. The carriage feather bobbing above my chignon, I felt a little bit like a linebacker, a little bit like I’d died. Patting my hand through two layers of kid gloves, he whispered: *Just like a yearling sale*.

He meant the subversion to be obvious. Meant the whole thing, I think, as a lesson. Meant for me to see the antique pistons that drive the debauch of Mardi Gras: classism, racism, patriarchy, the commodification of my sex.

I suppose he believed some things are best learned by doing.

One thing I learned: The “Greatest Free Party on Earth” is paid for by debs’ daddies. I shared this revelation with my college friends in Connecticut, trying to get them to stop making those faces at me. They were horrified by all this: the white dress, the pageant. They spoke to me in those tones that people use to speak to the brainwashed, lecturing me on the history of something of which they were not a part.

I tried to explain how funny it was. That all this had originated in a joke — Mardi Gras as a reprisal of Roman Saturnalia, a sort of class-based opposite day. I quoted Bakhtin — “All were considered equal during Carnival” — explaining that every socioeconomic stratum had a “krewe” that threw its own parade and ball. I got into the innate symbolism of rhinestones and the hermeneutics of the Zulu parade, whose African-American members wear whiteface under blackface, a send-up of minstrelsy that consternates still today. I told them about the hot-sauce heiress, who’d passed out, drunk, on her way to the throne. I made fun of Rex, the “King of Carnival,” who proclaimed his throwing of lead-tainted plastic pearls to be *pro bono publico*. It was cringeworthy, sure. But I figured it was my civic duty to be cringeworthy too.

It was early January, one ball down, two balls to go (some girls do as many as six during the weeks of Carnival between Epiphany and Mardi Gras Day), when Jonas called me on the common-room phone. Jonas, a friend of a friend, had New Orleans roots; he’d agreed to escort me to one of the balls over spring break.

“My dad says to tell you that I’m Jewish,” he said.

Then I figured out what he meant. As I scrambled to assure him it was OK, it dawned on me just how OK it wasn’t. At these particular balls, anti-Semitism was out of vogue, but racism was still in.

Carnival was *de jure* desegregated with the Mardi Gras Ordinance of 1991, which stripped parading privileges from krewes that refused to open their membership across race and gender lines. Dorothy May Taylor, a city-council member-at-large, argued that New Orleans had an interest in the makeup of these private clubs — they were powerful business engines, generators of jobs and opportunities unavailable to those excluded from membership. The “Old Line” Krewes — Comus, Momus, Proteus, and Rex — were indeed made up of the city’s business elite. The Old Line excluded plenty. The Old Line would not change.

I have woozy memories of the Carnival season that followed, the last before the ordinance went into effect: eating cold hot dogs at the Boston Club while watching the last march of Momus’s stilt-walkers; pumping the keg for people who showed up to parade parties in T-shirts portraying Taylor as “The Grinch Who Stole Mardi Gras”; the low tones of my parents’ friend in Comus, the Oldest of the Old Line, as he discussed the doom of Carnival. Comus, Lord of Misrule, would never parade again. Instead, to this day, his minions spend Mardi Gras Day on foot in the French Quarter, clanging cowbells, a tarnished remnant.

We were still invited to the Comus balls, even after they stopped parading. I should have known better than to go. Should have known better than to giggle when one of the women there, brittle in her mothballed dress, berated me for attending underaged. I should have recognized her — gatekeeper to the secret inner sanctum of the “elite” — should have stuck out my tongue. Should have backed away to the outside, slammed that gate. But instead I went back at sixteen in pearls, then eighteen, in my lilac dress. At twenty, it was me out there under the spotlights, wearing white as if for innocence, wearing plumes.

My father wants me to tell you about the ice. How, during the brief period the New Orleans Brass played ice hockey in the Municipal Auditorium, the dance floor was laid over the team’s rink. How a fog of frost hung low in the air and I shivered in my gown. How, after curtsying to the king and queen, I walked backward in heels (one must never turn one’s back on royalty) to my place on the dais. How, as I stood there, my feet went slowly numb from the cold.

It turns out I was wrong about Bakhtin. Carnival in New Orleans is not a time of anarchic equality; no oppressive hierarchies get turned inside out. No, with each handshake, each time I was congratulated for being white, and rich, and coddled, each time I was presented like a gift to “society,” I learned that Carnival was where those structures were reinforced. And we girls up there in our white dresses made a wall.

I couldn’t articulate all that then. I was twenty and well-conditioned — I’d not yet learned to unmask ugliness when it bowed to me in disguise. Instead, my body rang with unspoken rage, my mind vacillating between depression and revolt. I had been zipped, only half-willing, into that white dress, and I wanted to take it off.

Since Katrina, the Municipal Auditorium has fallen into ruin, a symbol, for some, of the city’s mismanagement — there’s not enough money, not enough energy, not enough time. For others, it stands in for other structures we wish would fall. Each year, the parades still roll, and new krewes — fresher, integrated, sometimes funny — are slowly eclipsing the Old Line. The balls are thrown now at the downtown hotels, the trumpet’s fanfare absorbed by acoustic tile. Now, at midnight, via the long escalators at the Sheraton, Comus descends in rhinestones from his throne.

When my grandmother died last year, her cedar locker disgorged its contents, and the dress returned. It hangs from a hook in my grown-up closet, its satin breast stuffed with yellowed paper to approximate a woman.

“I want a party, Mama,” my five-year-old says, sticking her head up the dress’s skirt. “I want to curtsy to the queen.”

“I do!” she insists, wrapped in white satin.

“You might not later, love,” I say. As I pull her into my lap and begin the explanation from the beginning, the dress falls finally to the floor.

*C. Morgan Babst is a New Orleans native and the author of* The Floating World, *a novel about Hurricane Katrina, published in October by Algonquin Books.*