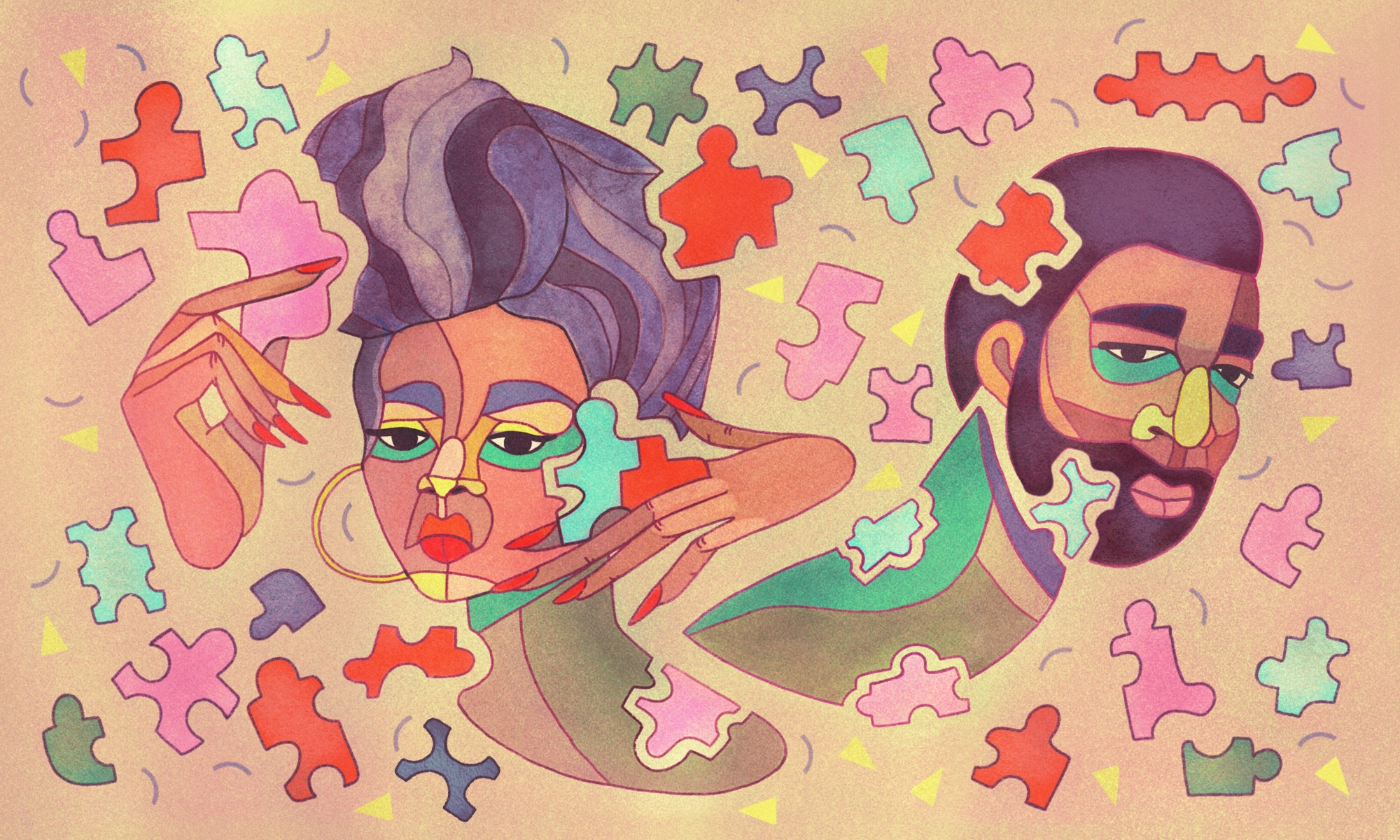 Imagine bathing in a source of unwavering loyalty. That’s what it was like to date a younger guy who was desperately in need of love and stability. A guy who was sleeping on his friend’s couch and working the cash register at a corner market *and* the reception at some three-star hotel above San Francisco’s Chinatown. He was also a self-described “deadbeat dad.” At 23.

I was an overeducated black woman with good credit, no kids, who was 20 years his senior — I should have known better. But I was suffering through the disability I call “middle life” and needed comfort. Turning 42 brought on self-criticism and disappointment that flowered like a bruise. There was a gray hair invading my afro-pompadour, sneering, *Girl, you’ll die before you do anything great, or pay off those student loans.* I had a “survival job” in government communications where getting boss approval on anything was like facing the powerful final opponent in a martial-arts movie.

Worst of all: the age-appropriate men I had dated. “Senior”-titled Elon Musk admirers who wanted to be treated like heads of state. They wanted a full program of cock-centric sex, custody days with their soccer-loving kids, and *Guitar Hero* nights with their power-nerd friends who would not let me play the tortured Amy Winehouse songs.

I had started my 40s dating a 50-something white dad — that romance was so unequal, it was an endless episode of “White Boyfriend Knows Best,” and it upheld white-male privilege and the patriarchy at a time when Donald Trump was running on the exact same ticket. “Don’t ever tell me again how men oppress women,” this boyfriend lectured, “when you women couldn’t even get together for Hillary.”

“That was *white* women,” I lobbed back. By Valentine’s Day, the current of political resistance had pushed me to the edge. After that breakup, I vowed to never make a submissive deal for love again.

The forces of solitude were crushing me when the damp-sky summer began. I was haunting a corner market designed to look like a Gold Rush general store, buying the cheapest bottle of Pinot Noir and a sushi platter for one, when out of nowhere the bearded guy working the register asked me to dinner. He looked about 30, and if you’re into Jeffrey Wright or Drake, this man would have definitely caught your eye.

On our first date, I brought out the “36 Questions to Fall in Love With Anyone” app. Around the tenth question, when I asked him to describe his ideal day, thinking he might say “Bike through Golden Gate Park, then do a beer-and-painting-class,” this 23-year-old stranger said it would be waking up with me, making me breakfast, then watching movies all day. I’d like to say I jumped up to leave, said “That’s weird, dude,” and grabbed my purse. What I did was relax, letting myself simply be worshipped.

Then he told me that his worst day had been when his mother sexually abused him. She was an addict and pretty much my contemporary. So Oedipus had been introduced in Act One. What was even more revealing was when he shared his history with older women: his last serious girlfriend was almost my age. She had three strokes while carrying his child. He left her during a tense recovery, when the healthy baby and the infirm mother both needed someone to wipe their tushies. Hopelessness set in. Tempers flared. And when this stroke survivor lashed out and said he should just leave, he was too green to realize that she didn’t really mean it. Instead, he took the infant to live with an attractive rural woman he had met on Facebook, somehow got kicked out of there, lost custody of the kid to his half-sister, and six months later escorted me to a near-empty gastropub that charged $15 for Brussels sprouts.

As Nietzsche said, sometimes we show compassion to the unlucky because we are just glad it is not us. So I kept ordering Pinots, observing this tragic man, slightly buoyed by how I was faring much better than him and the women who had encountered him. Soon, I was drunk. And as I made out with him while waiting for my Lyft Line to arrive, my brain suddenly snapped awake to this blunder. I opened my eyes and was confronted by his placid face, so like a baby camel’s. When I got home, I texted to say there would be no second date.

A few days later, at work, a black female executive yelled at me for following my white female manager’s orders. It felt like some meerkat, dominant-female bullshit — my manager was also in the room, but I got all the abuse. Suddenly, I needed glorifying.

I texted the 23-year-old. He met me at an Ethiopian lounge near my house. “I told my roommate I know you’ll dump me,” he said later that night. “I just hope you take your time.”

For the next two months, he would greet me outside my office, tell me I looked cute, take my hand, and guide me through grimy streets like a crossing guard does a school child. By date five, he had said he loved me. If a stress pimple exploded on my temple and bled, he would fit a tiny Band-Aid over it and coo at me. If I couldn’t face an email about a potential writing gig, he’d review it first, giggle strangely, then shorthand what it said as I stood paralyzed in the kitchen expecting rejection. In bed, he was as careful and attentive as someone preparing a body for burial.

Why did I join up with this guy? Maybe there was so much postelection dread that I would have huddled around anyone’s fire. Maybe I wanted to be the self-centered asshole in a relationship. Either way, I behaved like a cranky senior who didn’t get any visitors except this one junior orderly. I crabbed at him all the time.

“Your pits stink like an alley during a garbage strike,” I said, presenting him with a tube of Kiehl’s deodorant that seems medical-grade because it’s sold by people in white lab coats. “You look like *The Pirates of Penzance* in that billowy shirt,” I said, leading him through the mall to remake him in some better clothes. As the relationship captain, I steered the ship. I counseled him into community college. I also underwrote our meals. We lived in the most expensive city in America; carrying us both made me feel superior.

“Babe,” he once called to ask, “is it OK if I go out tonight with my coworkers?”

“Fine, but don’t spend too much. And be here in the morning.”

When he showed up at my house — still bleary from tequila shots, explaining that he had lost his cell phone at a bar and blacked out — I launched into a matronly reprimand about his bad choices and how he couldn’t afford to replace his phone with the child support he owed.

“And don’t think I’m going to buy you a phone and reward your dumb behavior.”

He glared at me, quivering like that kid from Stanley Kubrick’s *The Shining*, and said, “I’m sorry. I’ll go straight to the bar when it opens and see if it’s there.”

He gave me a beaten-animal look as I shut the door.

Secretly, I wished for an equal. With his funky armpits, youthful mistakes, and boring retellings of ’90s Disney movies, I was reminded of how mismatched we were. It made me even more despondent about my life.

“So she dresses up like a male soldier named Ping …” he’d jabber on.

“You ever see *Sunset Boulevard*?” I’d interrupt. “It’s this Hollywood classic where a faded actress keeps a younger man. Then she kills him.”

That fall, as I was leaving for a trip, he said he couldn’t cat-sit for me as planned. Or see me anymore. He just couldn’t constantly improve. He bowed out the door peacefully, and I chased him barefoot down Fillmore Street, feeling mean-spirited and craven. He turned around and listened wearily as I made a pessimistic gesture about my future, saying I wanted another chance. I also said something I didn’t mean about love.

But I’d have to face our relationship’s inequality soon enough.

We were at a bar in the Mission District (the shantytown part of the hood where people pitch tents on the sidewalk) and I was perched contentedly in his lap when a drunken woman paused her winning streak at the pool table, telling us, “I want what you have, guys.” And to him, “You treat this woman right; she’s beautiful.”

He ignored the flattery and after a few minutes turned to me, saying, “The only time you’ve said you loved me was the time I tried to break up with you.” I gave a tight smile and continued our pose as the enviable couple.

Later, holding hands on the walk home, he attacked something I had said that was ungrammatical. I replied with a comeback that barely makes sense now.

“Rude. They treated me like Beyoncé at the bar. So that makes you the unfaithful Jay-Z!”

“No, I’m Obama,” he said, and shook loose from my hand. He strode off at double the pace and disappeared, leaving me alone in a Hooverville along Seventeenth Street. I called and I texted and I spiraled until he blocked me — even on Facebook.

I’d been sure that this guy was SO incredibly fucked up, that I was the best thing that had ever happened to him. What I neglected to see was that I identified with him. Deeply.

As a sorrowful figure who woke up into a mess with no clear solution, my drifting midlife crisis yoked well with his whole-life crisis. It was like that Disney movie where a disgraced lion is incapable of facing responsibility, so he leaves home and wallows with some idlers, trying to drown the anguish of not living up to his true purpose by singing “Hakuna matata! … It means no worries!”

I realized that I was sloshing around in too much resentment. I started therapy. I got a very tiny grant to support my writing. I fessed up to wishing bitterly for ethical partnership and creative success and a different president. Then I decided to accept that my desires could remain like a thousand-piece puzzle still in the box, unassembled. But there was no use beating anybody up about it, not even myself.

*Keli Dailey is a writer, performer, and spectacle in San Francisco.*