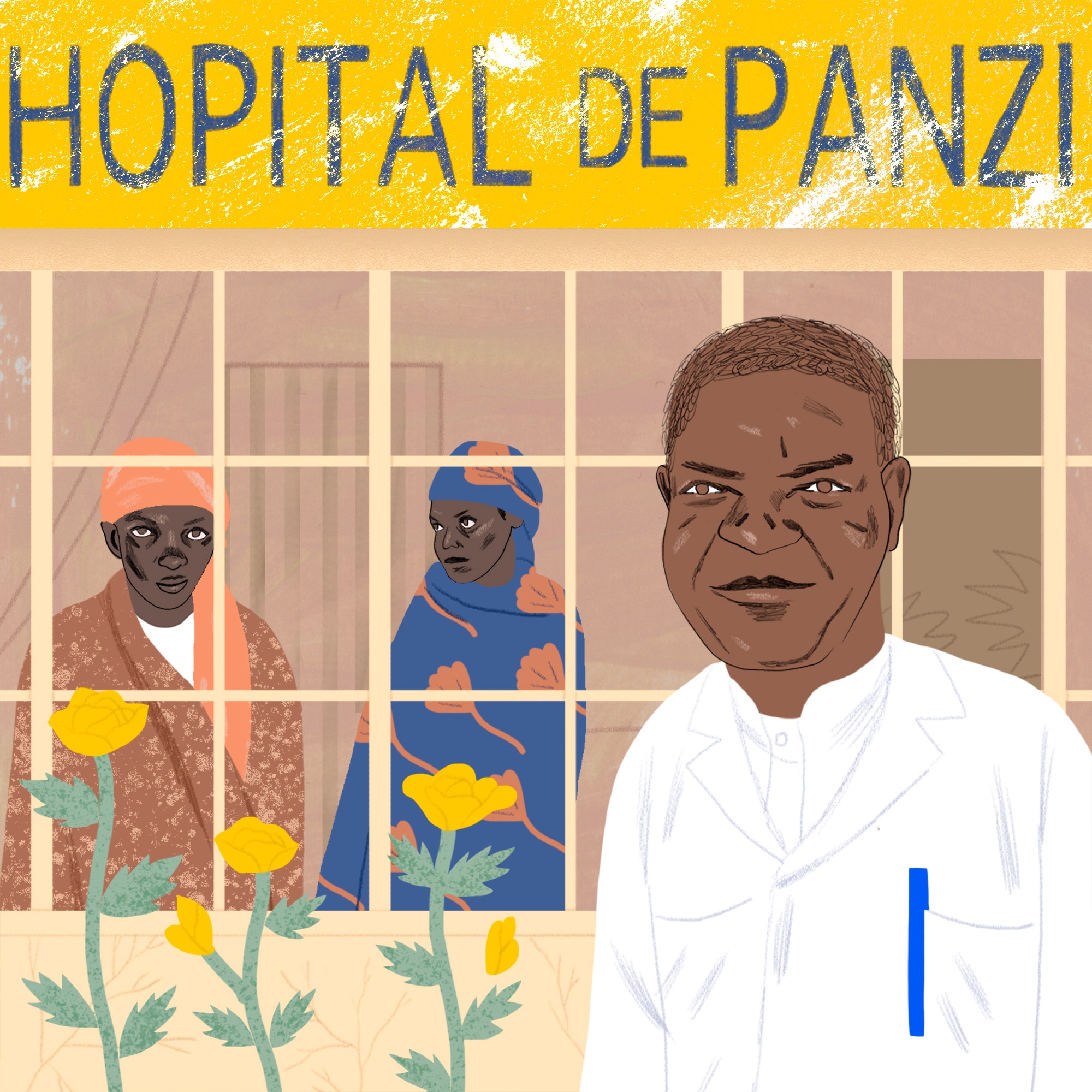 When Dr. Denis Mukwege was still a child, his father, a pastor, would take him on pilgrimages to visit the sick in Bukavu, a city in the eastern Congo. Once, he and his father went to see a child who was in near-fatal condition. They prayed for him, and after, Mukwege’s father stood to leave. Mukwege was horrified. When he was sick, his father didn’t rely only on prayer to heal him. Mukwege insisted: “Give medicine to this child.’”

“My dad said, ‘Denis, I’m not a medical doctor,’” Mukwege remembers. He was eight years old, and it was the first time he’d ever seen his father at a loss. A moment like that, “it leaves an impression,” Mukwege tells me when I meet him at an event in late September to honor his world-renowned efforts to end sexual violence and treat its victims in Congo. And it’s that experience that decided it — he would be a doctor. Mukwege faced his father: “You can pray, but I will give medicines.”

Three decades later, Mukwege, by then trained as an OB-GYN, opened (1), a complex of facilities built to improve health outcomes for pregnant women in Bukavu. But as patients streamed in, Mukwege realized he’d miscalculated the conditions in the area. It wasn’t just the disease and starvation. One by one, women arrived with horrific, gruesome injuries; they’d been so violently raped, their bodies had been torn apart. Amid (2), Mukwege has treated over 46,000 women.

At Panzi, he and his staff have implemented a five-pillar method, devised to help women reclaim a sense of self-determination in the aftermath of violence. The process includes medical care, psychological treatment, economic support, and guidance including job training, advice on how to reintegrate into their communities, and aid to pursue justice in court. “We can’t just treat the finger or the ear,” Mukwege explains. “We have to see the person as an entire whole.”

A little while before our interview, a former patient sends Mukwege a 30-second video. She’s young — maybe eighteen or twenty. She talks quickly, her voice loud and clear, like a bell. While we watch, Mukwege translates: “She’s learning to make karate, so she can protect me” — she wants to do for him what he’s done for her. Mukwege tells me he’s operated on this woman ten times; he’s had to repair an (3), reconstruct her vagina, and remove her uterus. He’s had to put her back together. But “because we treat her,” he says, “we bring her a life.”

I asked him where he finds the resolve he needs to do his job, knowing that there will be more patients — more women and children and, lately, babies who arrive at Panzi with such terrible wounds. Mukwege looks up from the video. “I have this feeling that even if it’s hard, I have to work,” he says. He points to the woman, her face frozen onscreen in a smile: “Look at her, and see. Does this answer your question?”

__Mattie Kahn:__ You went into medicine to treat children but ended up focusing on their mothers. How did that happen?

__Denis Mukwege:__ When I learned medicine, what I believed I should solve was a problem of children because it was what shocked me . But when I started to work in my country for the first time, the first day, two women died in giving birth. I learned that you can focus on children, but there are no children if mothers are dying in giving birth. So, after one year, I decided to become an obstetrician.

I worked in France for five years to get the certificate to be an obstetrician. I did that for fifteen years until the war started. And when the war started, I was the only OB-GYN in the region. And I start to hear and then see women with fistula, with all kinds of issues, and people brought them to me because I was the only OB-GYN in the area. I saw that, and I changed again. I studied. And now I’m a surgeon.

__DM:__ Most of the time, it’s easier to close eyes, close ears, and say, *It’s not my problem. I don’t have expertise. I can’t do anything*. Then, you have your peace. But I think this is a bad way. When people decide to be indifferent, the consequences are terrible. I say to everyone, “You can do something.” Everyone can learn. Everyone can be there for each other. And it doesn’t have to be big. Just compassion can change someone’s life, showing them empathy. Just to approach someone with your heart and share the humanity of another. That can change the world.

__MK:__ The women you treat — do you find that showing that empathy and compassion can make a big difference in their healing process?

__DM:__ When someone rapes a woman, it’s just to refuse her humanity. It’s just to say, “You are nothing. I can do what I want on your body. Your body doesn’t belong to you. I can take it. I can use it.” When it happens, many times women will ask, “Why me? Why did this happen to me?” And, you know, our society is always to say, “Oh, it was her fault. Why was she there? What was she doing?” People are trying to get different reasons to explain why women are raped. But there is no reason. It’s not women’s fault.

In the beginning, I did the operations, and that was it. But by the second year, I started to understand that I’m doing the surgery, and I have to do that, but I have an impression that not all women are healed. I could see the difference between the ones who could decide that *Now I’m good, I can start a new life*, and the ones who could not. So we introduced the psychological care, and that has been very important.

When we are treating women, it’s not just to treat their bodies. You must understand also what happened. And most of the time, what happened is someone just denied their humanity. So you need to give them back this humanity, and if you succeed, there is a sense of hope, because they can believe in themselves.

__MK:__ At Panzi, what does that process look like?

__DM:__ A woman needs to feel, *I’m again me. I’m in my body*. Many times, you can see that she starts to makeup. Many times, that’s the first step; she wants makeup. I once treated a sixteen-year-old girl. When she came in, she was very quiet. She couldn’t really accept . It was very hard. I operated on her, and we succeeded to repair the fistula, and she became continent. But she wasn’t herself.

One day she came to me with makeup on, and she said, “Dad, how do you find me? Am I beautiful?” And really, it was like she shined. She just shined. When we don’t want to take care of ourselves, it means we don’t believe our bodies are ours. These women have the impression their bodies—“It’s not mine. I don’t want to touch it.” When they really start to heal, the first step is to accept that “It’s me.”

__MK:__ Panzi has gained a real reputation around the world, and your work is well-known. When did you realize other people were interested in the techniques the hospital uses to treat patients?

__DM:__ Oh, it took time. And it will still take more time, because the hospital is known now, but the problem is still there. The first time I was here, I think it was in 2007, in New York; ten years later, I am still doing this advocacy around this problem.

It’s not that: OK, the world knows what we do, so that’s good and that’s wonderful. No, no, I don’t think that. It needs to be, “I know, and I want to act to make a difference, to help the women of Congo.” After ten years, the world has still not taken that action, and so the issue continues.

__MK:__ What would it look like for people in positions of power to take that kind of action? What needs to be done?

__DM:__ We have good resolutions . But the process is not really working as it should work. The question is, after seventeen years in trying to help women, are there enough women in the business association? Enough women in government? Enough women in the law? We know the problem, and we know the solution. It’s men who are still discussing security and peace, and who is suffering? It’s women, unfortunately. It’s men who are on the top, still. But who needs space? It’s women.

__MK:__ Your work carries real risk. Five years ago, you were almost assassinated, and the threat was so grave you had to flee Congo. Why did you decide to come back?

__DM:__ Several years ago, I made an assessment about the situation of women in Congo at the United Nations. It was 2012, and I said, “It’s not acceptable. The international communities are not doing enough. How many more women must suffer in Congo? When will the world act?”

When I returned to Congo, five people with guns came to my place. They waited for me. When I came back to my house, they started to shoot. One man was with me; he worked in my home. When the bullets came, he pushed me, and he’s the one who was shot. He died in my house.

It was a turning for me, and especially for my children. We left Congo and went to Belgium. But the women, they’re writing everyone, even the president: “We want our doctor back.” After two months, these women decide that, OK, so we are now sure that no one will return him. We must do it ourselves. Each Friday, they start to bring fruits and vegetable, sell it , and bring the money to the hospital to pay the ticket .

These women don’t have one dollar per day for their own lives, but they could get $50 each Friday to pay for my ticket. They had been told the ticket would be very expensive; it can cost for not only me, but my family, maybe $5,000, they said. And they said, “We’ll do it with our means, but what we want is to get him back.” When these women brought the money to the hospital, I couldn’t resist.

When I arrived at my house in Congo, they came with food, chicken, beans, everything. And they said, “We have here what you need.” They were 25 women, and they said, “We will stay here to be your security.” In front of the police, they said, “You are not able to protect our doctor; now we are going to protect him ourselves. If someone comes with guns, he will kill 25 women who are mothers before they reach him.” I’m sure that many men love me, but they could not do the same. And this is what I know about the strength of women. It’s women who have a sense not only for themselves but for how we can be better together.

*Mattie Kahn is a writer at elle.com.*