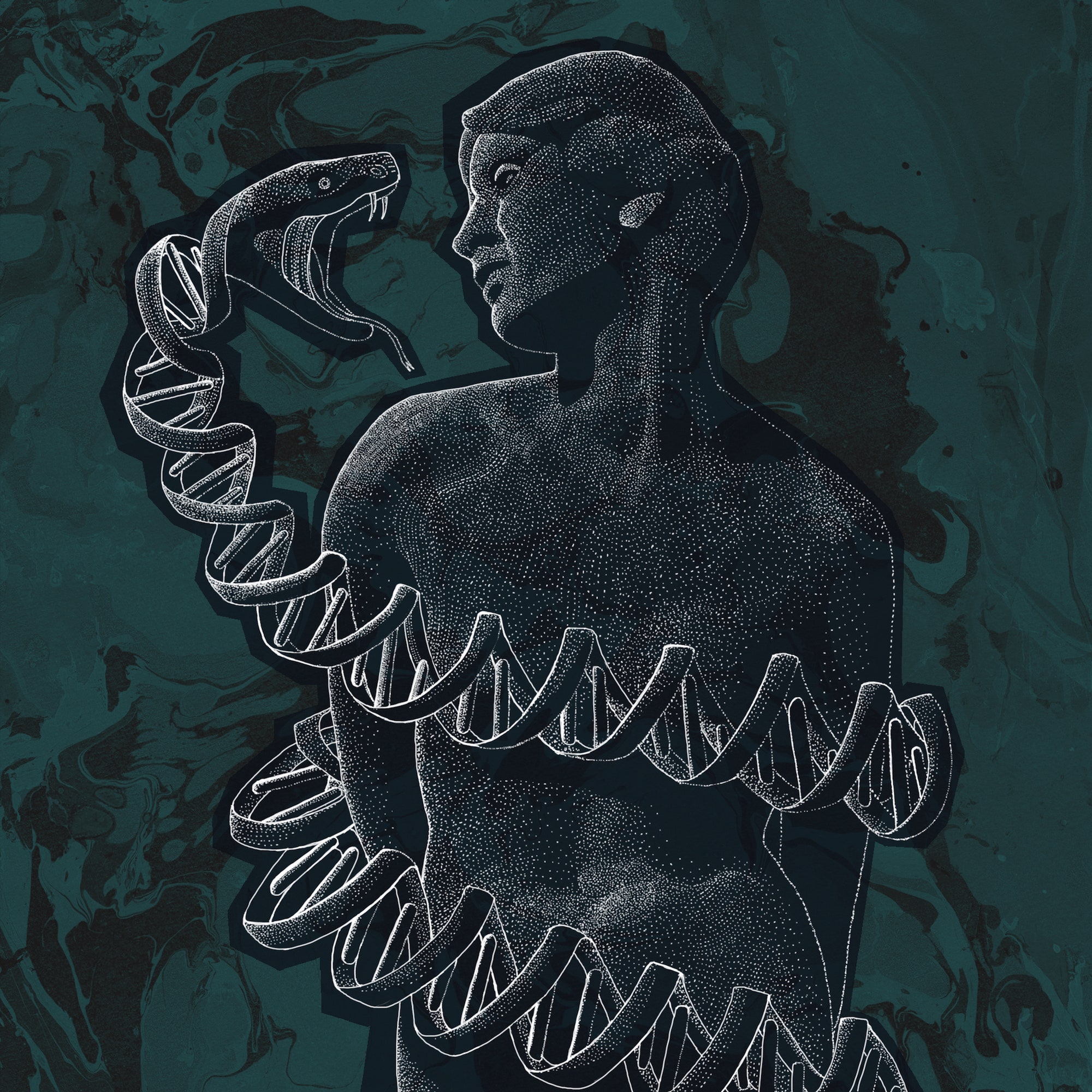 My counselor had pulled out the measuring tape, and I just talked and talked. “Look, it’s going to be big,” I said. “I’m Irish Catholic. I have big hair. I wore a size-large men’s hat when I was twelve years old. Most relationships have involved boyfriends saying sweetly, ‘No, your head isn’t *that* big!'”

For doctor No. 3, I took a different tack as he measured my head. “Have you seen Conan O’Brien?” I asked. “Irish folks have gigantic heads. It’s why there’s a lot of Irish actors.” He measured my head, got the same result as before, 24 inches, and left with a wave.

The day I went to the genetic counselor was the moment of truth, a cap on what had been about two anxious years of doctor after doctor: needle pokes, blood work, mammograms, and the clang-clang-clang of lying on my stomach in the MRI machine, boobs hanging down. All this work, and I never quite got a clean bill of health. I kept having doctor’s appointments.

And here at the genetic counselor’s office, they had vials of my blood, and they were going to tell me whether I had tested positive or negative for a rare genetic disorder. I had made the mistake earlier of looking it up on Google Images, where the disorder seemed to be inextricably linked to some of the most horrific medical pictures I’d ever seen.

The genetic counselor was short and Russian, with curly blonde hair that looked like ramen noodles. I made a lot of bad jokes. I told her about the horrors of the Internet, and how, if this was a genetic disorder, then that would kind of make me a genetic freak, right? My husband already had type 1 diabetes, which is rare, and maybe I would have something rare, too?

Her flat response, delivered in a gentle Russian deadpan: “In five years we’re all going to be genetic freaks.”

She was correct. The Human Genome Project, which mapped and identified the DNA that makes up the human genome, was completed in 2003, at a cost of $2.7 billion. Now, after a precipitous drop in the cost to map an individual’s genome, our genetic secrets are accessible to anyone willing to pay $200 dollars and spit into a slim plastic tube for 23andMe. Yet the thing is, when you pay money to 23andMe, you’re choosing to find out your genetic code. I had stumbled across my genetic story as doctors saw an abnormality and were looking to find an explanation.

It’s clear that I am on the front lines of a coming battle. We live in a time where anyone can access their genetic information, but even though the technology is available, it is not something that has penetrated our collective consciousness. But it should, because: we are all genetic freaks. When genetic information is available, who can have access to it, and what decisions can they make about your life? The privacy of this information is something that we need to legally protect for ourselves in the future.There is a bill currently in progress in the House of Representatives, H.R. 1313, that should make every American, every person with a genetic code, nervous. It’s otherwise known as the Preserving Employee Wellness Programs Act. And it would empower companies to get employees’ and their relatives’ genetic information through workplace “wellness programs.” This law could lead to a future where people cannot get health insurance because one DNA sequence implies that they could possibly get an expensive disease in the future.

> Privacy is a human right, and protecting the ability of humans to keep their information is an essential part of human dignity.

Think of the genome as a 500,000-page novel. There are clearly going to be some spelling errors in that novel. Some of those errors might change the entire meaning of the book: a character might get “billed” instead of “killed,” while others are things like “teh” instead of “the.” Genetic abnormalities, and we all have them, run along those lines. Right now, they are all considered risks. And companies do not want to pay for the risk that your “teh” misspelling will end up costing them an additional million dollars in health insurance.

Take my potential genetic abnormality, for example. The counselor gave me the results. They were inconclusive. I hadn’t tested a positive yes, and I hadn’t tested a definitive no. My genes apparently lay in the great gulf between yes and no, and it would have to be other factors that would push me toward one side of the ledger.

Apparently, it was the size of my head. The reason why my genetic results were inconclusive was that I had one misspelling, not two, so my genes were insufficient to warrant a diagnosis. But my head was in the 95th percentile for my cohort — enough to take me over the edge.

I had had a bout with colon polyps as a kid, which I barely thought about as an adult. Then, when I was in my late 20s, my mother had been diagnosed with ovarian cancer, and, finally having health insurance, I felt confident in going to the doctor for my first real physical in four years. It all went fine — I was a healthy young woman — until I mentioned my colon. I couldn’t even remember much of what it was, or describe it in any detail to the doctor. He furrowed his brow and gave me a recommendation to see another doctor.

I had been hoping I would get the all clear, but each doctor furrowed their brow, sending me onward to the next doctor. When I went to the gastrointestinal oncologist, he requested a colonoscopy. After that, he had a hypothesis: My polyps had been the result of a rare genetic disorder. This meant that I was more susceptible to a variety pack of cancers.

He sent me to the thyroid doctor, where I lay on the examining table, staring up at the photo of Tahiti stapled to the ceiling, and found out that I had a suspiciously large nodule. He sent me to the breast doctor, who had me get a mammogram since — due to my mother’s ovarian cancer — I could potentially test positive for the (1) mutation.

Then I ended up at the genetic counselor’s office. I was negative for BRCA. I was inconclusive for my genetic disorder. They suggested that my parents take the tests — my mother was able to, since she was already a frequent patient. She tested negative for both. To this day, my dad still hasn’t been tested.

When they told my gastrointestinal oncologist about the inconclusive result, he said that’s why I had childhood polyps. I didn’t fully believe him. The test was inconclusive, but it was a possible reason that the polyps existed, and for him, that was good enough. His previous interest in me, a mystery that he had to solve, dissolved.

Since then, life has gone on as normal. My doctors and I generally operate on a higher level of cautiousness, just in case. I am more likely to eat kale and to prioritize healthiness. It feels like, sometimes, my real health-care canaries are my four siblings, who are quite a bit older than me and are much more likely to battle genetic markers first. Ultimately, whatever my rare genetic disorder is, it’s just a memo to be present, to pay attention.

And I hope it stays that way. But if the bill is passed and signed by the president, then people like me, who live under the already uncertain aegis of America’s broken health-care system, will have to worry. Privacy is a human right, and protecting the ability of humans to keep their information is an essential part of human dignity. Corporations should not be able to know what your genetic code could augur for the future, and corporations like 23andMe, while selling a product that seems “fun” and “enlightening,” also have legal rights to your information.

It’s very easy to give up your privacy with the click of an app these days, and the seductive ease of it is exactly why we need to be vigilant. This bill is just one small part of an ongoing concern. We’re going have to worry a lot, and for genetic freaks like me, you, and everyone else, it’s going to weigh down our enormous heads.

*Elisabeth Donnelly is a journalist, screenwriter, and the coauthor (under the name Alex Flynn) of* The Misshapes *(Polis), a three-book young-adult series about teenage superheroes with lame powers fighting the rise of an autocrat.*