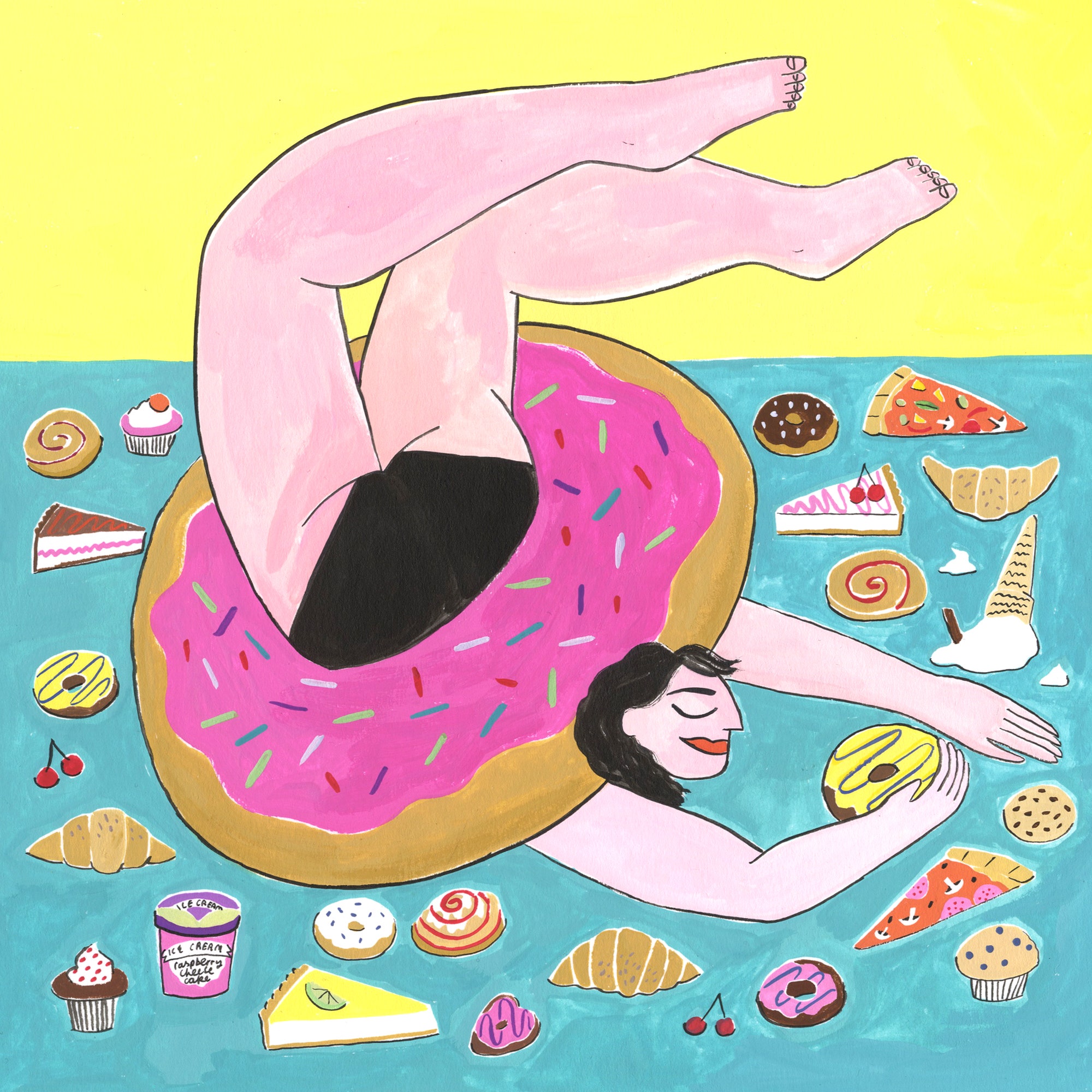 I’m a registered dietitian in private practice, and I’m more or less a food therapist. The gig wasn’t exactly what I was expecting, coming out of my clinical-nutrition graduate program, but I’ve fully embraced the role. In grad school, I pored over organic chemistry with serious gusto. But after finishing my dietetic residency, I realized just how much the science takes a backseat to the emotional aspects in real life.

Early on, I noticed a recurring complaint among my clients that’s still ongoing today: Most can immediately rattle off all the things they *ought* to be doing — limiting added sugar, exercising portion control, making more thoughtful food choices at restaurants, etc. The issue is that they’re not actually doing those things on a regular basis. There’s a gap between their intentions to get healthier and their day-to-day eating behaviors. So before we get to the actual meal planning, the crux of our initial work plays out more like a food therapy session, getting to the bottom of why they aren’t doing those things.

Ironically, the “why” is never what people fear it *must* be — lack of willpower or ability — not even close. The reality is, *it’s complicated*. For most of us, what we choose to eat is loaded. Consider this: Beyond using food as a way to nurture and bond with people, we also see it as a pretty powerful symbol of security and comfort, good times, and even courtship and seduction. Plus, we are taught as kids that food is how we reward ourselves (getting pizza for good school marks) and how we self-soothe (ice cream after a shot at the doctor’s office). We take these lessons into adulthood and continue to use food as an expression of a whole lot of feelings: good, bad, and everything in between.

The interesting thing, though, is that we don’t often do much introspection in this arena. Many of us tend to analyze our romantic relationships *at length*, but we don’t really spend time peeling back the layers when it comes to our relationship with food. Instead, we chalk up our intention-action gaps to unsavory character flaws and beat ourselves up for not being better at life. But the only real mistake here is not digging deeper. Because the more self-knowledge we have about our food hang-ups, the better we are at moving through them, rather than having them stand in our way, making us feel like crap.

One of the most loaded topics is the way many of us think about indulging. As far as I’m concerned, indulging involves making a conscious choice that takes into consideration your long-term goals and your right-now wants. We all have both. Meaning: most of us want to look and feel our best three months … six months … a year from now, and at the same time, we want the intoxicating donut *this minute*. The big misconception is that being healthy is dependent on always choosing the long-term goal over the right-now want.

Instead, it’s about having the ability to consider if having the donut is really worth it to you. If it is, put the donut on a plate and enjoy the absolute #$%& out of every morsel. Of course, depending on your big-picture goals, you have to be willing to forgo some of those right-now wants some of the time. But indulgences are a part of being human.

The problem is, instead of owning our indulgences, enjoying them thoroughly, and then moving on with our lives, we often bring wonky logic and ethics into the equation. We use tactics like moral licensing and loopholes to rationalize acting on our right-now wants. Moral licensing is the idea that “good” behavior offsets or legitimizes “bad” behavior, as in “I’ve been so good, I deserve to be bad.” Similarly, loopholes are another common way we use flawed logic to explain why we should be excused to indulge. “This doesn’t count”; “It’s the weekend”; “It’s summer”; “I’m on vacation” — you name it, we use it.

When it comes to eating, the issue with employing moral licensing is the fallacy that deciding whether to indulge is a matter of vice or virtue. *It’s not*. Unlike, say, debating whether to cheat on your partner or a test, deciding what to eat versus what not to eat isn’t a moral dilemma. You don’t need an external excuse or extenuating circumstance to eat what you’d like. It really doesn’t matter if you’ve attained inbox zero or you’ve had the worst week of your life. You’re welcome to act on that right-now want, regardless of those circumstances — as long as you do so consciously and take responsibility for the decision.

One of the best examples of this is a former client; let’s call her Hope. Hope was an ambitious MBA student at the time who had struggled with her relationship with food for as long as she could remember. Her goal was to lose about 30 pounds and, just as importantly, to free herself from the vortex of food drama. After six months, Hope had lost 25 pounds, when something really remarkable happened. She came back from Europe and said, “I have to tell you something … I ate a *CROISSANT*!” I asked her how it tasted, and she described it in detail, how buttery and flaky it was. She said that she savored every last bite, and the next day she kept going with the plan we had outlined together.

This was the best possible news and the definition of progress in my book. Six months prior, Hope would have rushed through the croissant too quickly to enjoy it (almost like it had never happened), and then eaten two more because she was so mad at herself, and suddenly all her progress would have been ruined. But without the stressful shame-spiral that typically followed, she was able to keep on keeping on.

Just to be clear about this: Making healthy food choices is great, and I highly recommend it, but choosing a less-nutritious track isn’t somehow less ethical or more shameful. This shady logic carries us further away from our get-healthy goals without our even realizing it, and then we end up attributing that intention-action gap to lacking willpower and resolve. That’s not the case, but viewing it this way can lead you to throw your hands up in frustration — or, worse, sink into over-it apathy.

I think we assume that being hyper-self-critical keeps us in check and that if we practice too much self-compassion around food or our bodies, we’ll lose our edge and let it all go. But this tactic backfires, because feelings of shame and inadequacy are common triggers for reward-seeking behavior (read: sugar-bingeing). This sets up the classic cycle: indulgence, then regret, followed by even greater indulgence and more regret, and so on. Instead of finishing a slice of pizza and closing the box for the night, a shame-ridden person might say, “I already ruined everything. I might as well polish off the whole pie.” My advice? When you unconsciously stray from the plan (this will happen), instead of trying to scold yourself into shape, get *analytical*. Remember: the more you understand about what makes you tick, the better you’ll get at moving through setbacks, rather than letting them kibosh your progress.

So the next time you’re faced with a food decision, stop asking yourself “How good have I been?” or “How much do I deserve this?” or “What day is it?” Instead, check in with yourself, consider “How much do I want this particular food?,” and let your answer guide your behavior. And do yourself a favor and skip the shame-spiral.