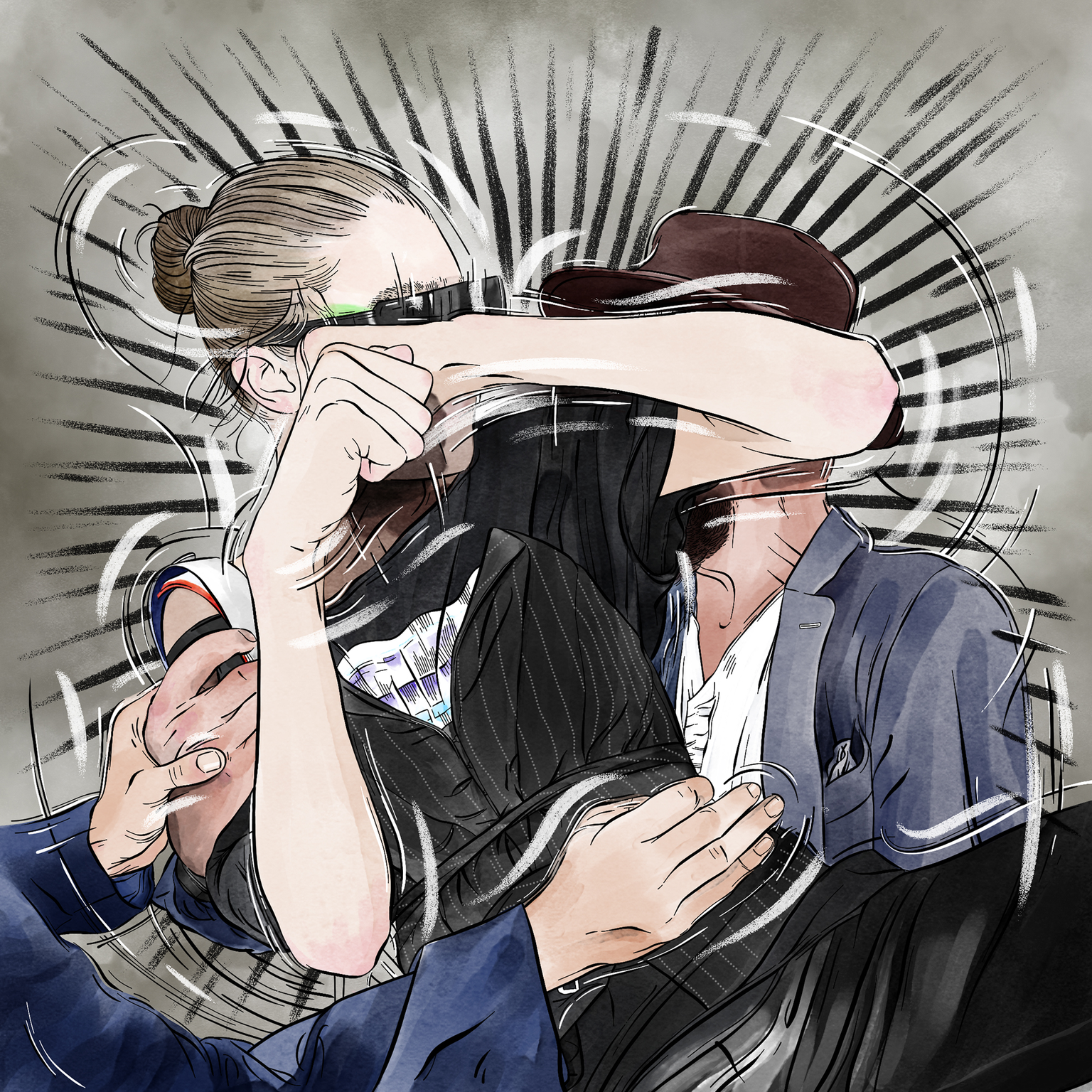 This past Thursday a video of supermodel Gigi Hadid made its way around the Internet, spreading faster than chokers as a trend among tweens. This is not an unusual occurrence: Gigi is an in-demand cover girl with dedicated fans who are as enamored of her ability to move between beachy chill and high-fashion runway as they are of her open and often goofy Internet presence. Gigi has been credited with redefining the supermodel for the Snapchat generation, and with that comes web ubiquity.

But this video was something different: it showed Gigi exiting a fashion show in Milan and headed to her car. She stopped to smile for pictures with fans when a man ambushed and grabbed her, immobilizing her limbs until she was finally able to rip an elbow free and slam her way out of his grip. What follows is a string of expletives from Gigi and her visibly shaken sister Bella. Then Gigi — calmer than most would be after a forced restraint — asks that someone follow and find the offender before closing her car door and driving away.

The video is equal measures upsetting and empowering. It is chilling to watch, in real time, the ownership a stranger seems to feel toward a body he considers public domain. But it’s also stirring: in one swift movement, without the aid of her bodyguards, Gigi makes it clear that she will not be made to feel like anyone’s property.

While support eventually poured in, the first reactions from the Internet attempted to paint Gigi as rude, bratty, and ungrateful for the blessing of fan attention. The logic behind that response seemed to be that because she has chosen to have a public-facing career, one in which her sexuality often takes center stage, she has also implicitly asked to be manhandled.

What’s even more sobering about this assumption is that it doesn’t just apply to celebrities. While street harassment is an under-researched problem, existing studies show its (1). In 2014, (2) revealed that 37 percent of American adults would feel unsafe walking alone near their home at night. Forty-five percent of women expressed this fear, compared to 27 percent of men. These statistics spike upwards in developing nations.

(3) best-selling book _ (4)_ is based on the theory that people, especially women, have lost touch with their intuition. They ignore warning signals from strangers for fear of looking bitchy, cold, out of control, or crazy: all the labels applied to Gigi before the video revealed that she wasn’t just irritated by some excited fan’s attention.

As unfortunate as the incident was, seeing someone like Gigi wield her elbow without hesitation is so essential to her young female fans, many of whom may have their own experiences of unwanted contact. In an instant, she made it clear who was taking control and who needed to be controlled.

One paparazzi photo captured the action perfectly: Gigi, dressed in blade runner chic, sunglasses on and hair tidy, broke character and gritted her teeth as she used her strength (she boxes as a hobby) to set herself free. We all have our favorite iconic model moments: Linda, Christy, and Naomi in the bathtub. Kate Moss’s first Calvin Klein ads. Helena Christensen​ dancing on the beach in the “Wicked Game” video. Let’s add Gigi breaking free to that list.

I spoke to Gigi the night of the incident as she processed the experience after a long day of fashion shows in Milan. Let’s just say I’m eyeing a membership to Gleason’s gym now.

I remember taking the time, as it all felt slo-mo, to look at him, a stranger, and my first reaction was: “Get me out of this situation.” I played volleyball, and my coaches talked about muscle memory. I started boxing two years ago and I always remembered that. Since then, I hadn’t been in a situation that forced me to fight back, but it just came out when he grabbed me — it wasn’t a choice. I do have that fighter in me.

Honestly, I felt I was in danger, and I had every right to react the way I did. If anything, I want girls to see the video and know that they have the right to fight back, too, if put in a similar situation. Practicing self-defense is important so that when you’re in the moment, reacting from muscle memory comes more naturally to you than freezing up. Confidence in your own ability to defend yourself comes with educating yourself about it, and is a massive advantage when in an unsafe situation.

> Honestly, I felt I was in danger, and I had every right to react the way I did.​

The first article that was posted about the incident was headlined: “Not model behavior. Gigi aggressively lashes out and elbows fan in the face after he tries to pick her up. The supermodel angrily hit an unknown man before running to her car.” That’s when I really got pissed. First of all, it was a woman who wrote the story with that headline. What would you tell your daughter to do? If my behavior isn’t model behavior, then what is? What would you have told your daughter to do in that situation?

When my mom first saw what had happened, she texted me the picture of me elbowing the guy and (among other messages of support) said, “Good girl.” My mom has taught me the power of my instincts since I was a kid. She’d always be like, “OK. Pay attention to the people who make you feel uncomfortable. I want you to tap into that and be aware of it.” I continue to use that intuition with the fashion industry and the people who I have to be around. It usually guides me pretty well. I think it guided me in this situation, too.

It sounds cliché to say it, but in the moment, it wasn’t heroic to me. It was just what I had to do. It’s very touching to me that people see it that way. I know people are put in much worse situations every day and don’t have the cameras around that provoke social-media support. I just want to use what happened to me to show that it’s everyone’s right, and it can be empowering, to be able to defend yourself.

_Gigi Hadid is a supermodel and social-media maverick, and she has a mean left hook._