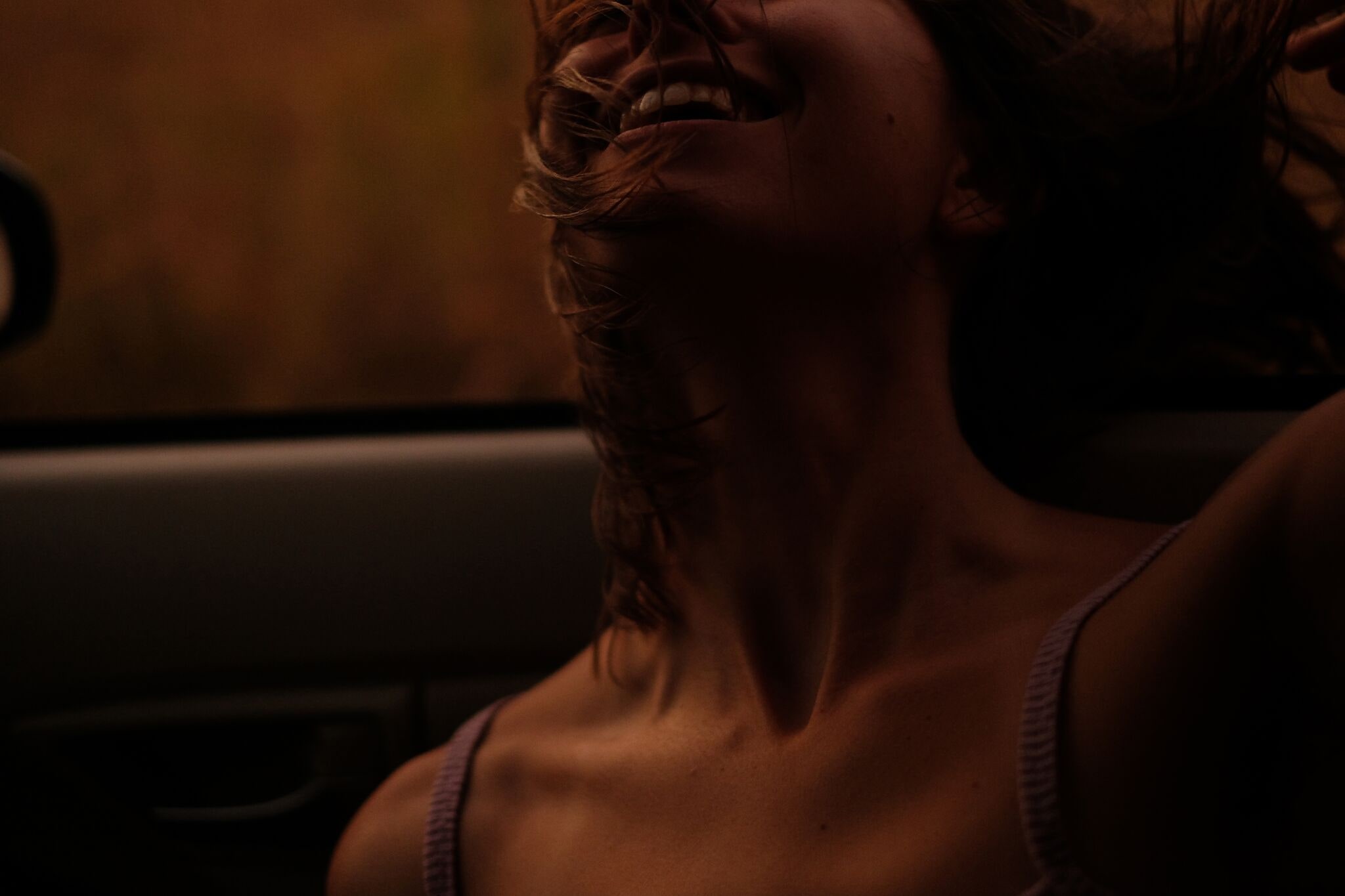 It is Sophie’s idea to steal the car.

Sophie sits in the passenger’s seat of my brother’s Honda, gnawing on the straw of a Wendy’s Frosty. Her hair sweeps across her forehead, ironed flat, all milky-chocolate breath and runny eyeliner. Friendship bracelets wrap around both of Sophie’s wrists, and she wears a tight pair of cutoff denim shorts with a cropped shirt, damp from the mid-summer humidity. The light from the single streetlamp makes her bare collar look like raw stripped bone.

Three weeks ago, Sophie gave Tommy Hill a blow job in his garage after school. Tommy Hill’s garage was made for blow jobs; the couch from the basement had been dragged in, along with a lamp and an old stereo system. The garage was separate from the house, and he could have a whole party there without his mom hearing. Sophie walked over after school, and they watched an episode of _South Park_ on Tommy’s laptop before she leaned over and unbuttoned his pants.

“It was exactly like you think,” she said, and she licked her lips.

It was her tongue I thought about for the rest of the day, flitting from her mouth like something uncaged.

My brother Joel thinks there’s a specific, calculable moment when a boy becomes a man. I heard him telling that to his friends after the senior keg party, when they all came home smelling like sweat and beer and they whispered loud in the kitchen. Joel became a man the first time he had sex with Kelly Robbins. He’d had sex before, but not like that, he snickered, and I watched from the staircase as he made a humping motion in the light of the refrigerator. The next morning, we found vomit in mom’s rosebushes.

Now, Joel is at a concert in Miami, and Sophie and I are sitting in his Honda. We are allowed to borrow it under two conditions: no drunk driving, and no nasty shit.

So we idle in an almost-empty Arby’s parking lot off the highway. It’s two in the morning — we sneaked out through my mom’s basement window, crawled under the porch, and pushed Joel’s car down the driveway to start the engine in the street. Once, my mom had woken up to the sound of Joel’s engine as he sneaked out, and she chased him down the driveway in her pajamas. He was grounded for a month. He’s never careful.

The Arby’s has been closed for hours because it’s closer to dawn than it is to dusk. Hulking shapes of tables and soda machines loom behind the darkened windows. It’s too quiet, without any buzzing lights. The chairs are stacked on the tables, and from here, they look like a morose mountain range.

“Check out that car,” Sophie says.

It’s an old Subaru — the only car besides ours in the Arby’s parking lot. The paint is chipped, and the driver’s side door hangs partially open. The windows shine beneath the solitary streetlight.

“Someone just left it here.”

“So,” Sophie says. “The driver’s side door is open. Dare me to get inside?”

I think about Joel and the yellow light of the refrigerator. I wonder if it’s the same for girls. If there’s a moment where we can say: I am grown now. Look what I have become.

Tommy Hill wasn’t the first for Sophie, though she doesn’t tell me this. I hear it from the other girls in the locker room after gym class. Jackson McElroy, Dario Rodriguez, and apparently even Benson Harford, who plays the bassoon. _Skanky Sophie,_ they call her _._ Mostly it’s just kissing, though Dario told everyone she took off her bra in the science classroom when they sneaked in during a basketball game. I asked Sophie about this once, and she rolled her eyes.

When I imagine kissing, my mom’s old-lady phrase pops into my head. _Locking lips._ I imagine that’s how it goes when you kiss someone: you lock a piece of yourself into them. The shared molecules bind you somehow, and by swallowing — even afterward — you become a part of one another.

“Come on,” Sophie says. “There’s no one here. Why would they leave the door open if they didn’t want someone to climb inside?”

This is a stupid question, but of course I don’t tell her that. A fruit fly buzzes through the swampy air between the dashboard and the windshield. Sophie kicks the Frosty cup beneath the seat, where Joel will find it later, filmy and gooped.

> I wonder if it’s the same for girls. If there’s a moment where we can say: I am grown now. Look what I have become.

“And do what?” she says sharply, like an accusation.

“I mean, I’m bored too.” The words tumble out of my mouth, clunky and immature. I am wearing a plastic headband, and it’s so tight against my scalp. I catch a glimpse of myself in the side mirror. I look like a little girl.

The Subaru waits there, an itch.

The only thing we’d ever stolen before was a bag of marshmallows from Sophie’s kitchen when we were eight years old. Her parents were drinking wine in the living room — we were limited to one bowl of ice cream for dessert each night, but we sneaked downstairs for more sugar, socked feet silent on the floor. The cupboard creaked as we opened it.

When we made it back to the safety of her bedroom with our prize in hand, we rolled the powdery marshmallows around in our mouths. They were too sweet. When my mom came to pick me up, she asked what was wrong, and I said, “Nothing. Just a stomachache.”I had a funny look on my face, she told me. That night, I stood at the bathroom mirror and tried to decipher the contours of my own face — which looked guilty, which looked older, which just looked like me.

“Come on,” Sophie says, nodding toward the abandoned Subaru. “Do this one thing for me. We’ll just sit inside for a second.”

Her mouth is wide with a laugh. I picture it wrapped around a popsicle, or a banana, like she jokes sometimes. I have only ever seen a penis in a textbook, and even there, it looked like a terrifying and intrusive thing, alive with its own tense, needy energy. It looked like nothing I’d ever want.

When we get out of the car, Sophie does a cartwheel on the gravel beneath the wide midnight sky, her hair flipping over her eyes and back again.

I follow the tangle of Sophie’s ponytail across the parking lot. The clack of her flip-flops is like a song I know every word to. The air outside is choking hot, a damp sort of suffocation — the lush trees around the parking lot steep in their own greenery, looming.

“Are you coming, or what?” Sophie calls over her shoulder.

Sophie pulls open the driver’s-side door, which is already cracked. She slides in, unceremonious, and leans over to unlock the passenger’s side.

The inside of the Subaru smells like someone else. Like unfamiliar laundry detergent and stale cigarette smoke. The leather seats are imprinted to fit a stranger’s shape. A pine-tree air freshener dangles from the mirror.

When the passenger-side door shuts behind me, I understand a glimmer of what has gotten us here. The thick summer air and the way we breathe it open-mouthed, the round expanse of the parking lot and the universe that flowers out around it, us at the center, us at the root.

“Now what?” I ask Sophie, and her teeth gleam. Straight, flat, white.

The keys are in the cupholder. They glint silver.

My body is a million nervous angles, sprouting in all the wrong directions. I can hear my own traitor heart, slamming ferocious in my chest. I wonder about Sophie’s heart. How different it moves.

We watch the keys, as if they might float up by themselves and start the ignition. Sophie’s desire pulsates from her body, a livid, dangerous thing. I recognize it. The same desire that wrapped its wet mouth around Tommy Hill, the same desire that gives Sophie cartwheels and me this acute fear — this nauseating sense of time, speeding by too fast.

Sophie moves first, reaching into the cupholder. She cradles the keys in both hands, hungry and precious.

“Hey!” someone shouts, invisible in the dark parking lot. “Hey, you!”

Sophie is all motion. _Fuck!,_ she is saying, and she is yelling for me to follow, to get out of the car. For some reason — habit — I have buckled my seatbelt, and I struggle to wriggle out of it, slamming my finger in the plastic handle as I open the door.

“Fuck, fuck, fuck!” Sophie is saying as we slap across the parking lot in our sandals, the voice running close behind us.

Nights, Sophie used to pull me close and whisper in my ear, her breath sour and sticky, a child’s gasp. Nights, we would press our hips together, touching each other’s necks. See? This is how it feels to be close to someone. One of us would turn away, flushed and embarrassed. We weren’t ready, not for that sort of close. We had not been watered.

We stumble into Joel’s Honda and slam the doors. I fumble with the keys, and the parking lot comes alive in the glow of our headlights. The voice belongs to a man in the distance — he sprints toward us, an apron slung over his arm, strings dragging in the street. He wears a black embroidered Arby’s hat.

The stereo turns back on to the station we’d been listening to before, and his voice is drowned out by the familiar beat of a pop song.

We make it to the highway. I drive 90 miles an hour in the direction of home, breathing hard, electric.

“Do you think he got our license plate?” I ask Sophie.

Sophie leans her forehead against the window. Her hair is stuck to the sweat on her neck, and her Day-Glo nails are clenched in her fists. We pass golf courses, rolling hills in the dark.

Sophie watches the night race by while I watch her in careful glances. It is this, the shape of my particular desire — me and Sophie, together in the car, her sweet dough skin and the smell of her shampoo — it stings like loss. I think of the anatomy-book penis again, that giant aching thing, and I can’t imagine wanting anything the way I’m supposed to.

It occurs to me that older is a place I can’t see, and Sophie is there, waiting.

_Danya Kukafka is the author of the novel_ (1). _She works as an assistant editor at Riverhead Books._