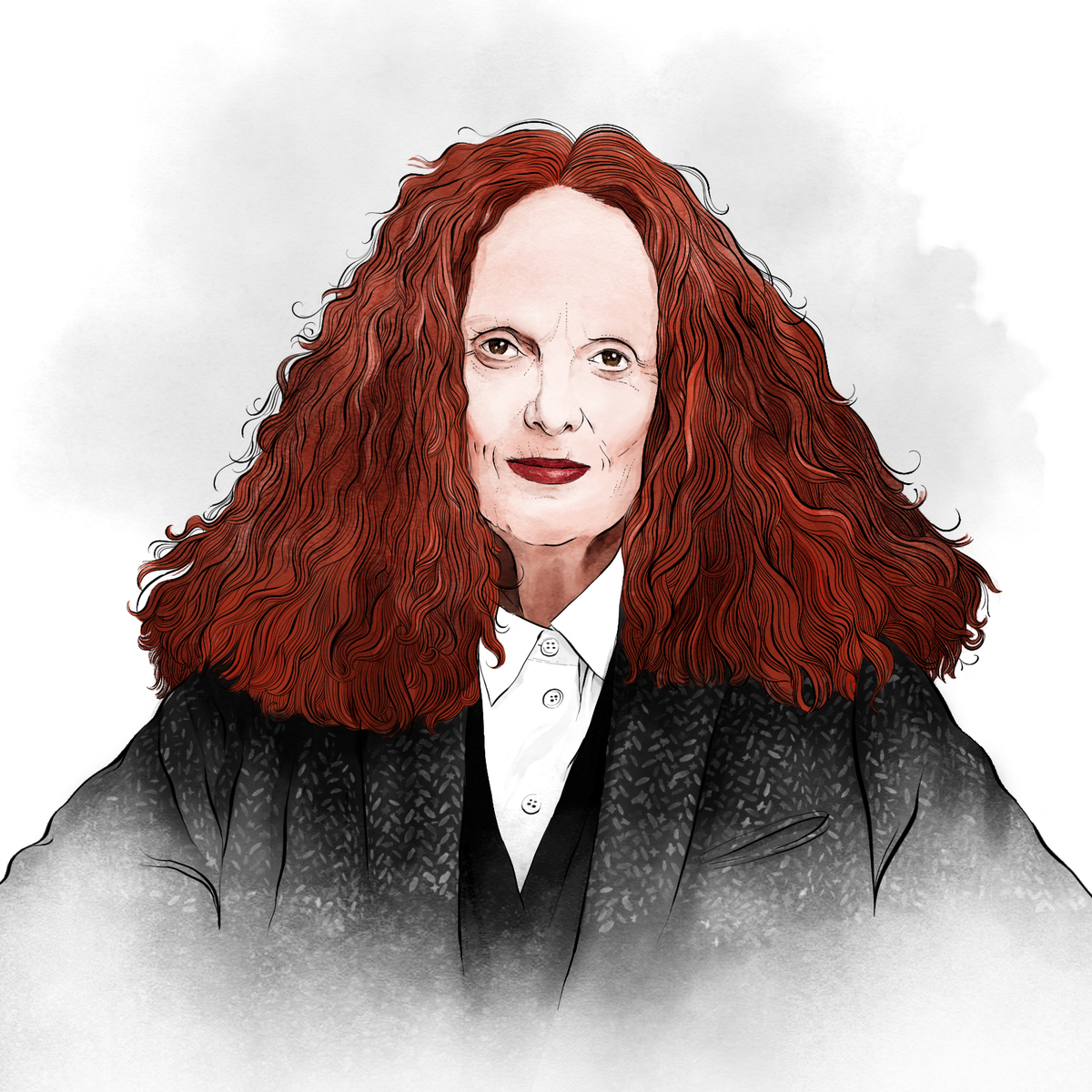 ​It is a truly beautiful day in New York and I am inside the café at Dover Street Market, the cool store that begat all the cool stores, trying to keep my own cool as Grace Coddington sits across from me, ready to chat. I grew up obsessively reading my mom’s issues of *Vogue*. Its pages covered my notebooks at school and the walls in my teen bedroom. In revisiting those same images throughout the years, I came to realize that most of my favorite photographs were part of Grace’s body of work — remember the incredible *Alice in Wonderland* portfolio that featured the model Natalia Vodianova as Alice and a bunch of fashion designers, from Marc Jacobs to Karl Lagerfeld to Nicolas Ghesquière, as the other iconic characters? Yeah, that was Grace. Even if you aren’t a fashion aficionado, you are probably familiar with Grace as the surprise star of the *Vogue* documentary *The September Issue*. Her quiet romanticism was in fierce contrast to the fast-paced, money-takes-all vibe expected from the fashion industry. She also has an iconic fluff of red hair that is both a crown and a halo.

We are here because Grace has reconfigured her role at *Vogue* — she’s now creative director at large — to allow her time to pursue other projects. The first is a perfume that (1), created in collaboration with Comme des Garçons. If you follow her on (2) (which you should), you’ll know that Grace loves cats, especially her own, Blanket and Pumpkin, which often show up dressed in the latest fashions, in her iconic doodle style, and on her perfume bottle, which features cat ears.

Grace is charming, and laughs often. We talked about sniffing, keeping childhood memories intact, and what her ideal project would entail. After I stopped recording our conversation, we also talked about our shared love for Adam Driver, and it was a truly perfect morning.

**Laia Garcia:** What is your life like now that you’ve begun this new chapter? Are your days more relaxed?

**Grace Coddington:** It’s extremely busy and extremely fun. I was quite busy before. Now it’s sort of busier because it’s not all coming out of one central thing. I’m multitasking! I go to my office at *Vogue* every day and work out of it, which is really convenient. I like doing projects on the side. I’ve done a few books … distractions, if you like. That’s always been fun. I did a (3), and then I did a (4), and then I did (5), actually. Now I’m doing another picture book, which has just gone to press.

**GC:** Freedom is hard and difficult. You have to make more decisions, funnily enough.

**GC:** Just that I wanted to do something completely out of the realm of books. And since my name is a little bit known now, I thought I could take a chance on doing a perfume with my name. If you’re too obscure, it probably won’t sell. Beyond that, the challenge of putting it all together and doing something I knew absolutely nothing about was intriguing.

**GC:** Tons and tons of sniffing. Sniffing and trying things and putting it on. Seeing if other people say, “Oh, you smell nice.” You find the one you think you like and then live with it for a bit. It’s a little bit like cooking — you add a bit and take a bit away.

**LG:** Do you have any scent memories, like a favorite perfume that reminds you of a specific time in your life?

**GC:** Well, this is about roses because they are my favorite flowers. They were my mother’s favorite flowers. Her rose garden was her pride and joy. I come from an area that’s a bit bleak in North Wales. There’s not much growing there. In the bleakness, there were all these roses.

**LG:** You grew up reading *Vogue*. Later on, you were in the magazine as a model, and then you worked there as an editor. Did you ever remember working on a shoot early on and thinking, *I’m creating these images for other young girls to see*?

**GC:** It’s a big responsibility, it really is. You’re thinking, *Oh my God, here I am! I’m doing what I’ve seen other people do for so many years. I hope I can match up to how well it’s been done before*. Even today, when I do a shoot, I’m nervous. Is it going to be as good as I know it must be? I have very high standards, and it has to live up to those standards every time. You have to challenge your thoughts a lot. To say: “I know what I mean, but is it really reading like I want it to read?”

**LG:** Do you remember an early project that you felt very, very nervous about?

**GC:** My first shoot was nerve-racking because I thought I knew everything because I’d been modeling for ten years, and then I got to the studio and I realized I knew nothing. I’d only seen it from the other side. Then the responsibility is all on your shoulders. It’s a whole different ball game.

The most scary thing I remember is going on an assignment to photograph Prince Charles when he was made Prince of Wales. I was with the photographer Norman Parkinson and thought it would be so exciting. We went to Windsor Castle, and when the prince walked in the room, words completely failed me. We were introduced, and I couldn’t even answer him! He was completely charming, and I was just “Uhhhhh.” One is in awe of those people, and it was back before everybody knew celebrities and things. Prince Charles is a bit beyond being a celebrity. But meeting someone that I had seen only pictures of was awesome.

**LG:** Do you ever think of the life of your pictures, after they’re done in the magazine?

**GC:** Well, I think they end up in the dentist waiting room or something. Don’t they?

**LG:** I was thinking about the life that fashion shoots have on the Internet. Especially on places like Tumblr, where people post them because it’s a symbol of how they’re feeling. It stops being just about the clothes, and it’s more about the mood.

**GC:** That’s another whole life for photographs, which is kind of amazing. There was a time when the life span of a magazine was very short. When the magazine fell apart, then photographs were forgotten, but now all those old ones keep coming back. It’s wonderful to see.

I think that, for me, pictures are very much about the mood, which you are building around the actual dress or whatever. It’s a process.

**GC:** I haven’t been for a very long time, since my mother died, and that’s 30, 40 years ago. It’s kind of remote and difficult to get to, but also, I don’t want to spoil my dream of what it was. I know that it’s become very different to the way I remember it as a child. It was really bleak and beautiful when I was a child. I think it’s probably not like that anymore.

**LG:** One last question. What would be an ideal project for you to undertake? You’ve published books, you have a perfume. Is there something else?

**GC:** I’m looking for it, so if you have any ideas … I mean, it’s kind of strange, I’m not that young anymore, but having become a freelance person, it sort of opens up the possibility to almost anything, you know? Which is very exciting. I just don’t know what that thing is.