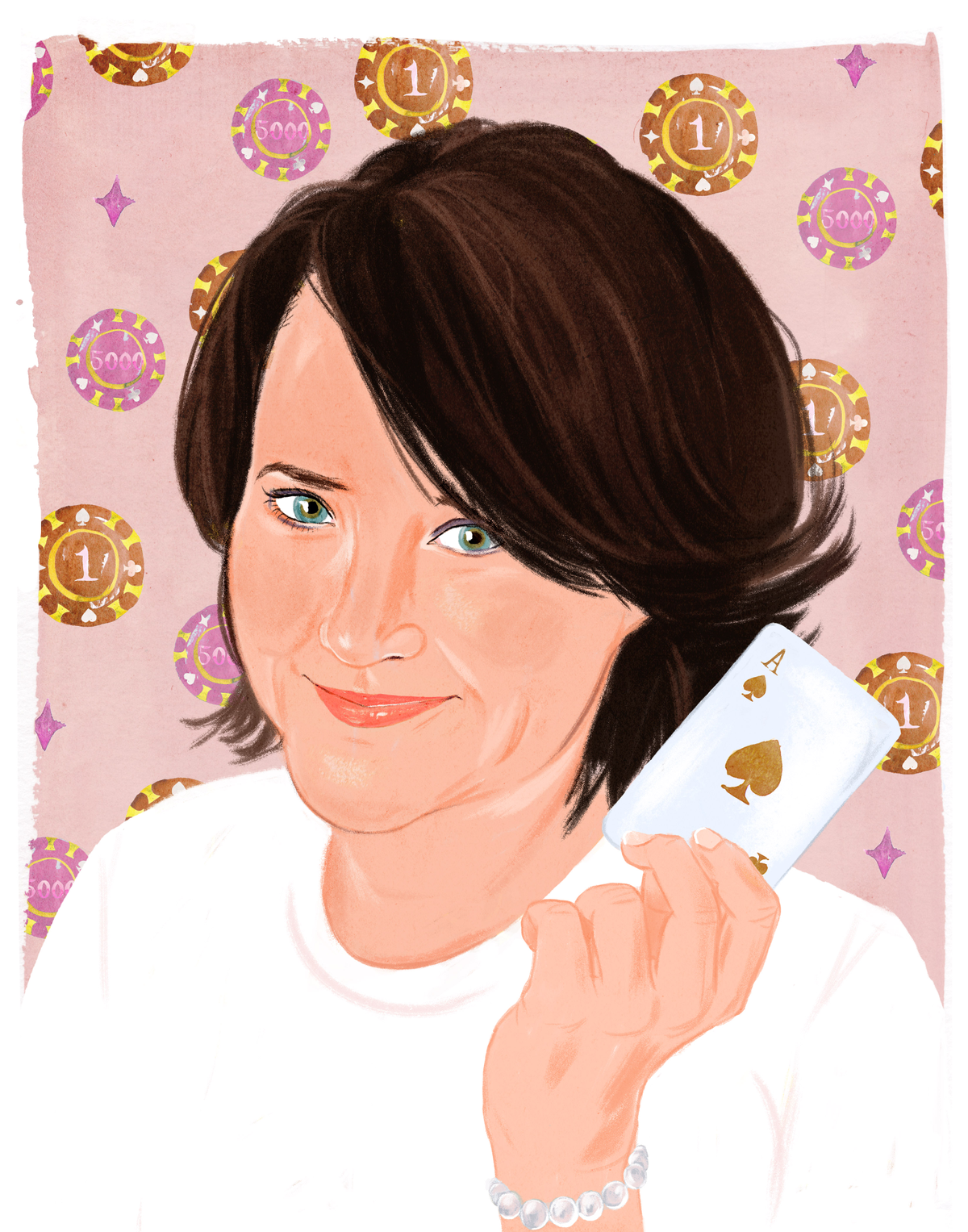 ​Helen Ellis has just come back from a weekend of playing poker in Atlantic City. It wasn’t the best weekend, but she is in good spirits telling me all about her poker adventures. And they are adventures. She is a prim and proper Southern lady, always impeccably coiffed, almost never in jeans. I already know not to underestimate Helen by her perfect housewife demeanor because I’ve read * (1)*, her latest book, a collection of short stories about domestic life, biting and full of subversive wit.

When I learn that she is also a poker player, I am initially surprised, but not shocked. Poker is the perfect vehicle to destroy your opponents without messing up your hair. It’s all “head games,” a show played for oneself, and also for the audience at large, as I learn when I later talk to her. After we finish talking, I am determined to learn how to play myself, but also determined to make sure if I ever have a daughter, she can take the boys down while wearing pearls too.

**Laia Garcia:** When did you first start playing poker?

**Helen Ellis:** I started playing poker at six years old — my niece is six years old, and I am chomping at the bit to teach her how to play. I learned at the kitchen table beside the lazy Susan of my granddaddy’s house, with my grandmother making oven-heated Ore-Ida French fries.

Ever since then, I played. On my 21st birthday, my father met me in Las Vegas. We stayed at the Mirage; it was brand new. There was *Siegfried & Roy* \, there was the huge erupting volcano outside. We walked through the casino on the way to the buffet. My father put $5 on the roulette table on the number 21, and it hit. Then he took me to the Strip, sat me on Caesar’s statue. He told me, “Look around,” and there were the lights of The Strip and the stars in the sky. He said, “Helen Michelle, this is the center of the universe.”

To this day, my father and I meet twice a year to play poker. We go to Vegas, or, because he’s in Alabama, we’ll go to Biloxi, Mississippi, or Tunica, Mississippi.

**LG:** Do you remember what it was like when you first played in a tournament?

**HE:** I have two that come to mind. The first one that comes to mind, I think it was 2008, which really got me playing tournaments proper. All these casinos that have poker rooms, they have nightly tournaments, which are $55, $105, small tournaments with 100 people, if that. For years, I would play these nightly tournaments. I usually would go to these, play cash, no limit, put down $200, and as soon as I won my entry fee for the tournament that night, I would quit and then play the tournament.

One of the first ones I played was in Tunica. I started out playing women’s events, or, as they are called in the poker world, Ladies’ Events. Women make up, at most, 4 percent of the poker players in the tournament world, a really nice way to become comfortable in that arena is to play the Ladies’ Events. It’s a nice way to get your toe in the water. I would encourage any woman to do it. It’s not as aggressive. When you walk in as a woman, you are noticed. It is intimidating. Think about when you walk into a mosh pit of all men. They’re a little bit better behaved because they’re seated, but they immediately see you as prey, until you quietly reach across the table and slit their throat.

I had been reading up — at the time, the poker-tournament bibles were the *Harrington on* *Hold ‘Em* trilogy. I studied up. I had certain rules that I went by. I was and am a very aggressive player, and I wound up coming in second. I remember my father was there. He was sitting in the stand watching on his little bleacher. It was like being the only girl in Tuscaloosa, Alabama, Little League in 1979, which I was. The only reason I got to play was because he agreed to coach the team.

It was that moment of making my father proud, and making myself proud, and walking over to the cage and getting two $5,000 bricks of money, which is incredible. Then putting that through the conveyor belt at the airport going home. *Shall I stuff this in my pants; what shall I do?*

**LG:** That sounds incredible. Do you have any rituals before the show — I mean, before a game — to prepare yourself?

**HE:** Oh, it is a show! It is a show because it’s all an act. You’re just sitting there. My rituals are: I get up in the morning, I go down and have a little pre-breakfast, which is a little coffee and a pastry. Then, I usually have a shower, get ready, listen to music. I always have a theme song when I play. One year in Atlantic City, my theme song was Joan Baez’s “Dida.” Then, last year at the 2015 Spring Poker Open, where I final-tabled, my song was the theme from the *Unbreakable Kimmy Schmidt* show. A lot of poker is not playing. You’re sitting there waiting for an opportunity. It can be very intimidating, and so I loosen my nerves by singing a song in my head.

The way the poker tournament works is, you just play until there’s one of you left standing, but usually every two hours, you get a 15-minute break. My other ritual is I go to “my office,” which the empty ladies’ room. It’s the one place in the world you do not have to wait in line for the ladies’ room. I have probably six people that I call my “virtual rail.” There’s something in poker called “railbirds,” and that’s people who stand around and watch the tournament. I have my virtual railbirds, and I report, *This is how much I have; this is where my mind is at.* It’s sort of a way of re-centering and giving myself a little pep talk, so that is what I do.

**LG:** You have a very feminine style. Did you ever think about changing your style when you first started playing poker with the men?

**HE:** Never. I would say sometimes even more feminine in that arena. Most of the time, you see women in jeans and hoodies and sunglasses an effort to blend in. For me, I need to be myself. I think that really feminine style can be intimidating.

I remember a tournament last year, I’d been playing for three days in this tournament. As you’re narrowing down from 1,000 people to 500 people to 100 people, you’re playing with the same people over and over again. This young New Jersey kid had been playing beside me for a couple of days, and he says, “You know, I’ve met ladies before, but you’re like a *lady-lady*.”

I always wear my pearl bracelet. I’m usually in a dress or a skirt. They put a picture of me on the Borgata blog this weekend, and there I am in a Tory Burch bedazzled cardigan.

I feel like it’s armor in a way. It’s also a disguise in a way, because I want you to judge me incorrectly. A lot of men see me as weak, and that is fine. I don’t mind that. When I started out playing, I had that mentality of *I’m going to prove myself to you, don’t judge me*. Now, as my game has evolved, I’m very happy to let you judge me, because that makes me stronger. There’s a reason that Carol on *The Walking Dead* is my favorite housewife.

**HE:** It is. It’s a stamina game. It’s one of the few games where I can win a hand with the worst hand, you know what I’m saying? That is such a pleasure. Men don’t think women will bluff. They don’t think women will lie, whereas every other situation in life, they think women are lying to them. This weekend, twice, I heard men at the table say to other men at the table, “I didn’t want to be embarrassed that I laid down a straight to her flush.” They said it twice that “I didn’t want to embarrass myself by letting this woman win.” That was new to me, but they lost anyway.

**LG:** Do you have a trick to keep your cool? Did you have to train yourself to not have a tell on your face when you’ve got a good hand or when you see somebody do something super-dumb?

Sometimes I’ll get up and leave the table and go to the restroom to sort of shake it off. I’ll do the same thing if I win a massive pot. That can throw you off as well. A massive pot, and you have all these chips, it’s very easy to want to get involved with more and more hands because you have more and more chips, when you shouldn’t.

The thing about poker, or a poker tournament, is that you learn you’re going to fail. Even if you fail and fail and fail, you will eventually succeed.