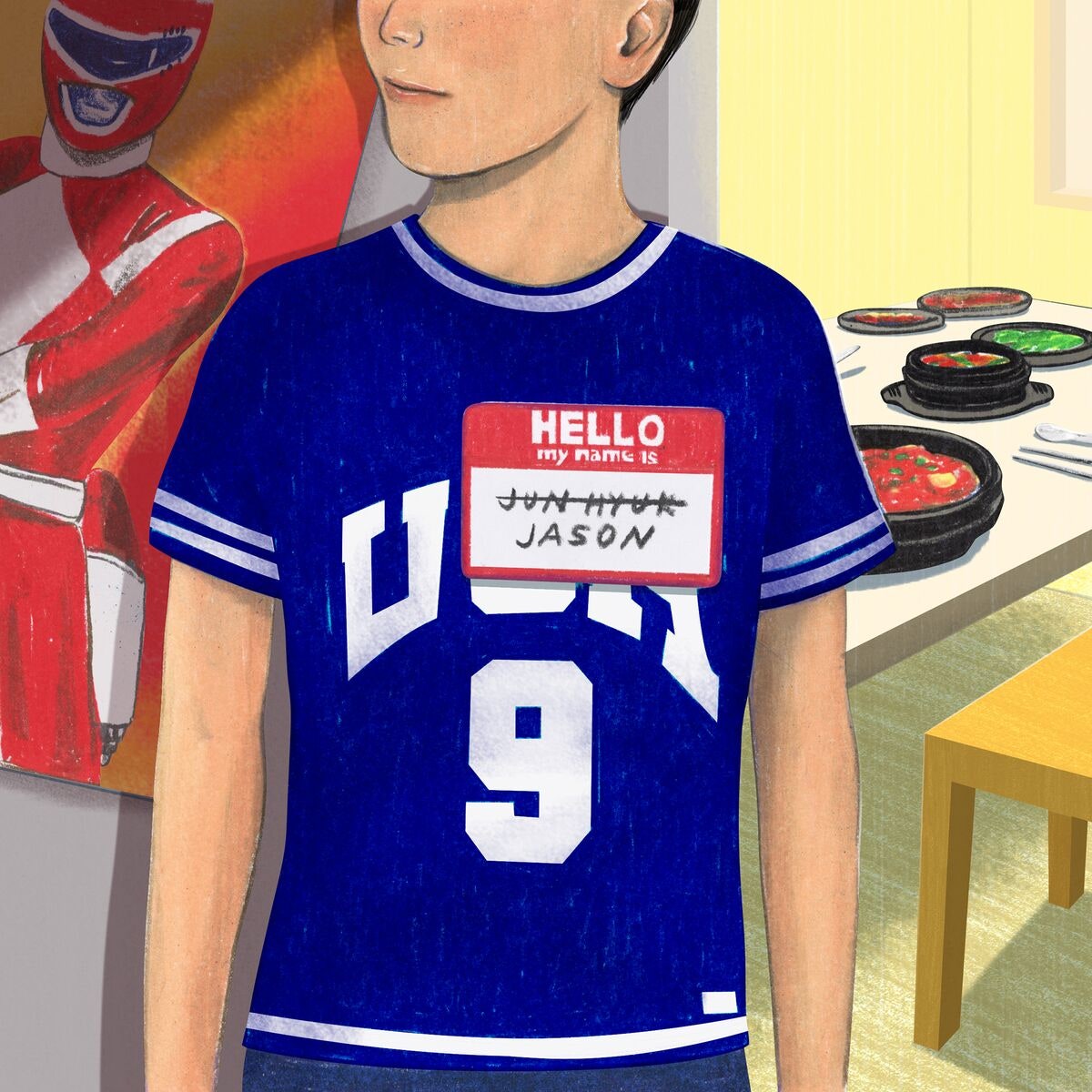 I will never forget the day I picked a new name. I was standing in front of my class on my first day of school at Craig Elementary in St. Louis, Missouri. I had, only a day before, landed at Lambert airport after a sixteen-hour flight from Seoul, South Korea. I was ten years old. I was nervous, terrified, and jet-lagged, and I was wearing a vest because I thought it was chic.

For my entire life, everyone, including me, had known me by my Korean name: Jun Hyuk. But here, in this new country, in a brand-new classroom full of foreign faces, I had to pick a new, easy-to-pronounce, American name.

How did I settle on Jason? Because I didn’t speak any English. Because my teacher didn’t speak any Korean. And because it was either going to be Aladdin, from my favorite childhood Disney tale, or Jason, from the _Mighty Morphin Power Rangers._

I spent the next decade wanting nothing more than to look like a Larry Lorberbaum or a Garrett Kennedy. I still vividly remember my first time at recess, a confusing experience for several reasons, in large part because hanging off monkey bars and making each other cry during dodgeball were not educationally sanctioned activities in Asia. What was so fun about waiting in line, running up the steps, and going down a tiny slide over and over again? What was the value in sprinting after your classmate like a person with rabies, screaming, “TAG!”

Why didn’t anyone look, sound, or act like me?

I spent most days at recess sitting alone on the sidelines, eating the special snack that my mother had packed. The snack, a rice cake or a piece of candy from Korea, was always accompanied by a note, usually a joke, and sometimes embellished with a drawing, which often looked like an abstract painting when it was meant to be a sketch of our beloved deceased poodle.

> I spent the next decade wanting nothing more than to look like a Larry Lorberbaum or a Garrett Kennedy.

A month had passed when a teacher finally tapped me on the shoulder.

Before I could answer, another teacher rang out, “Maybe he likes sitting alone. Maybe that’s the Asian way.”

But in truth, I wanted to participate. I wanted to run up to Timmy like a crazy person and yell, “YOU’RE IT!” I just didn’t know how.

Outside on the playground, sitting alone at recess, I learned to hate being Asian. I wanted desperately, more than anything, to be white.

I immediately forced my parents to stop calling me Jun Hyuk at home. I named myself after some guy in a live-action children’s television series, and by God, they were going to call me by that name. I got rid of my fitted vests for loose-fitting basketball jerseys. I bought tickets to an Incubus concert and threw away my K-pop CDs. I stopped reading Korean children’s books in order to figure out what the hell was going on with James and his giant peaches.

At the dinner table, I committed the two worst sins that a Korean son could possibly commit: I stopped speaking Korean and I stopped eating Korean food. My parents would try to talk to me over a bowl of kimchi stew, and I would pout and ask, in English, if we could order the Meat Lover’s pie from Pizza Hut. For my eleventh birthday, my mom made me my favorite Korean dish, _oh jing uh bokkeum_ (spicy stir-fried squid), and I looked at her with disdain as I declared, “This is disgusting.” The next day for dinner, she made me a cheeseburger. I promptly told her it tasted inauthentic and made her drive me to McDonald’s. Oh, and no more special snacks either. Unless they were artificially flavored and made by Kraft. (I was a heinous child. Sorry, Mom.)

> At the dinner table, I committed the two worst sins that a Korean son could possibly commit: I stopped speaking Korean and I stopped eating Korean food.

I graduated from high school and moved to New York City for college, where my primary goal was to blend in. But more and more, my new friends wanted to know about all the things that made me uncomfortable in the Midwest. To them, being an immigrant made me interesting. At dinner parties, people would fawn over the Korean food and ask for my mom’s recipes. They even wanted to know about my childhood in Seoul. And at karaoke, people were genuinely excited that I could sing both Girls Generation and Natalie Imbruglia’s “Torn.” All of a sudden, being different was an asset, not a risk. In New York, I didn’t have to be ashamed about being an Asian immigrant. I could just be ashamed about everything else in my life.

A year after I finished graduate school in playwriting, almost two decades after I’d landed at Lambert airport, Lena and Jenni cast me as an Asian American graduate student on the fourth season of _Girls_. Almost immediately after the episodes aired, I began receiving emails, tweets, and Facebook messages from young Asian American writers, actors, and performers, who were excited to see a fellow Asian face on TV.

I was shocked. How could this be? I appeared on the show for, like, a millisecond, and my Beyoncé sweatshirt was definitely doing more work than I did onscreen. It was genuinely baffling to think that anyone could look at my very Korean face and feel a sense of connection, much less react in a positive way to the very features I hated about myself for so long.

We are at the point in our culture where people are finally beginning to talk about Asian identities in the media. I have not been at the forefront of those issues. I have been crouching in the back, hiding in the corner, watching people like Margaret Cho, Daniel Dae Kim, Ali Wong, George Takei, Constance Wu, and Aziz Ansari courageously speak up about the various issues that Asian Americans face in Hollywood.

The issues exist both in front of the camera and behind the scenes. There are barely any roles written for Asian actors. And in general, the roles that _can_ be played by a person of any race do not tend to go to Asian actors. Worst of all, the few roles that _should_ go to Asian actors — some very high-profile — are being portrayed by white actors. Behind the camera, there are equally few Asian American writers, producers, studio executives, authors, and editors, and while there are certainly a significant number of people struggling to make it, their efforts seem to go largely unrecognized.

I have always been terrified of speaking up on behalf of diversity, which to me means a state of inclusion — a choice to be aware of the vast and profound range of identities in this world, including your own.

I have been terrified because I grew up in a country without many visible Asian Americans in the culture, and I learned to hate every part of myself that felt foreign and strange. Unfortunately, years later, this is a problem that many young Asian Americans continue to face. How do you understand yourself in a diverse country that actively chooses to ignore your particular kind of diversity?

At one point during my twenties, I took a long, dramatic look in the mirror and realized, _You will be Korean for the rest of your life_. As a teenager growing up in the Midwest, that thought made me cringe. Now, it makes me happy and deeply proud.

My dream now as a 30-year-old is for our country to become a place where a cameo like mine would go completely unnoticed. And to see every third-grade teacher tell his or her students, “Keep your name. You don’t have to change a thing.”