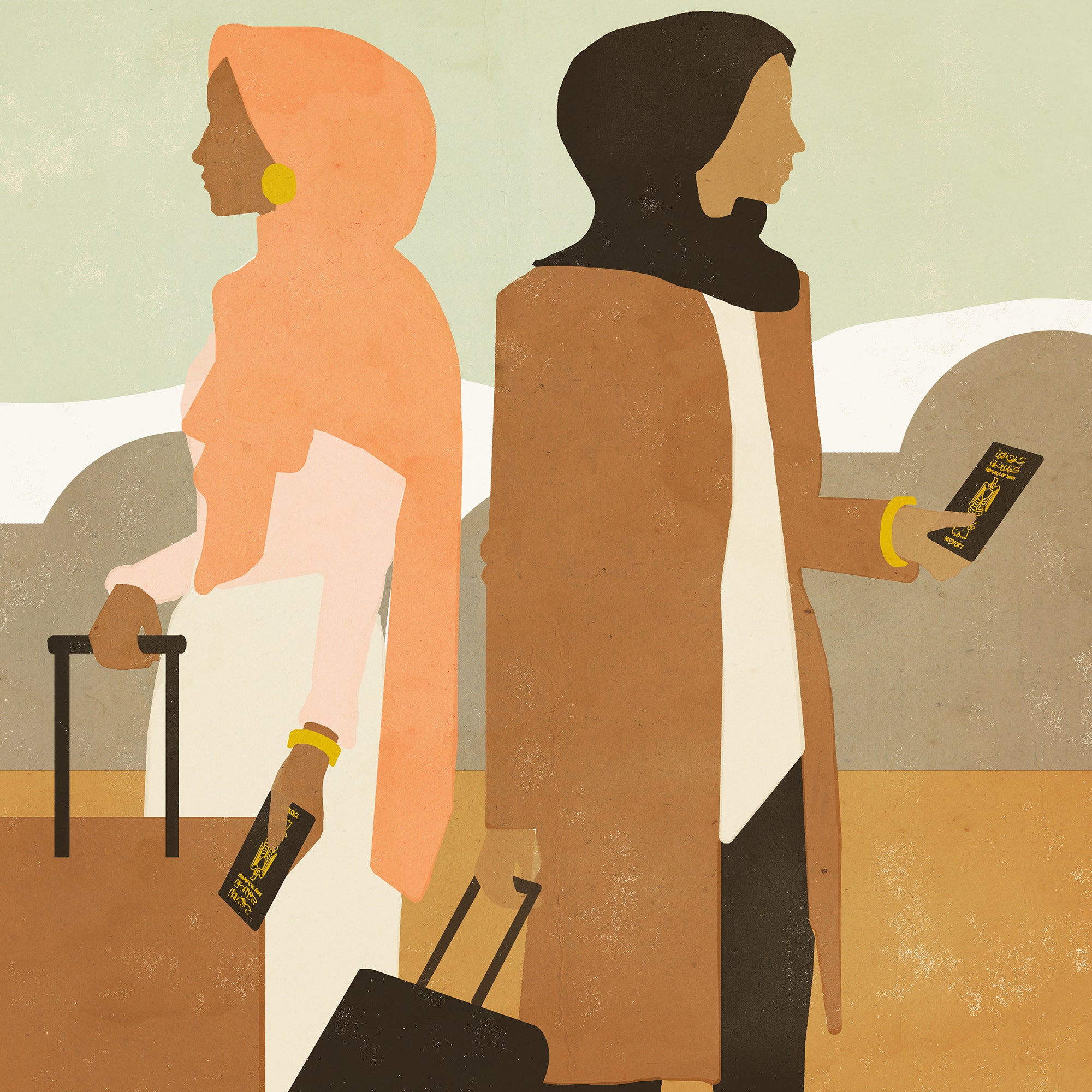 *For Muslim Women’s Day, we’re collaborating with (11) to tell the stories of women all over the world.*

In 2016, 25-year-old Iraqi Zeina Atamish graduated with a bachelor’s degree in chemical engineering and got accepted into an MBA program in the United Kingdom; she thought the world was her oyster. However, a little blue book — Atamish’s passport — proved to be more important than her qualifications and hard work in determining her future place of residence. Her student visa was rejected. “They said I was from a ‘high-risk’ background,” says Atamish. “I am a young, single Iraqi woman, so they weren’t convinced I would go back home once my studies were over.”

According to the (15), the Iraqi passport is the world’s second weakest, followed only by Afghanistan, which means the list of countries that passport holders have access to visa-free or visa on arrival is sparse, currently with entry to only 27 countries with only 5 countries not requiring a visa at all, compared to 127 countries for the United States. The Middle Eastern nation, which the (4) in 2003, was also among the seven countries that President Trump targeted with (12) in January 2017. Not to mention, the number of humiliating horror stories — from (6) to (7) — that Muslim travelers experience as a result of Islamophobia.

But the visa rejection didn’t kill Atamish’s wanderlust. Unable to visit Europe or the United States, Atamish explored the Middle East and Muslim-majority Asian countries, making a trip to Pakistan her first destination out of her country (“The media doesn’t really like Pakistan, in the same way it doesn’t like Iraq”). Eventually, she moved to Istanbul to pursue her MBA and began to document her travels. And that’s how her travel blog, (1), was born. It’s a small but ambitious platform that aims to change the perception the world has about Muslim women and show them they can be world travelers too. There’s photos and tips from her most recent trips and life in Turkey, written in both English and Arabic, and an original series called Breaking Stereotypes where she profiles “ordinary Arab women,” one of them being her grandmother.

In addition to the bureaucratic difficulties Muslim travelers like Atamish might experience, Muslims are sorely underrepresented in the sphere of travel media.

There are (5) worldwide, roughly a quarter of the world’s population. Yet do a quick search on Instagram for #travelblogger, a hashtag used on over 17 million posts, and chances are you’ll be inundated with photos of thin white women posing in front of historical monuments, idyllic beaches, and photogenic walls. Despite the efforts of platforms like Travel Noire and Muslim Travel Girl, young women of color like Atamish rarely see reflections of themselves in the travel media. Bloggers that get the most visibility — the ones who (2) and (13) — are almost always white and creating content that speaks only to their demographic.

When Kareemah Ashiru, a 25-year-old Muslim-American from Ohio, wanted to move to Spain after finishing her bachelor’s degree, she struggled to find Muslim-specific travel information. “I wanted to know all about where to eat the best halal food, attitudes toward Muslims in Europe, and local places of worship, but there wasn’t much information online — especially for hijabi women,” says Ashiru.

She started her blog (8) with hopes of helping to fill that void of information. She documents her halal culinary adventures and Ramadan experiences and gives tips about her destinations from Iceland to Morocco. Aiming to create even more of a community, Ashiru, along with another Muslim travel blogger, Sally Elbassir of (3), started the Facebook group (9) last June. Currently, the group has around 500 members and serves as a space where Muslim women with the travel bug can share tips, make plans, and find companions. During her travels, Ashiru has met many group members in person; they’ve provided a sense of community for her away from home, she says.

As an American citizen, Ashiru didn’t have the same setbacks as Atamish when it came to travel visas, but that doesn’t exempt her from subtle discrimination and feeling like an outsider while traveling. She recalls a time in Austria when a woman on public transportation was noticeably uncomfortable sitting next to her. A friend who was with her at the time told her that the woman had said something nasty about Ashiru and a bomb in a Slavic language. It’s the reason why she makes it her duty to keep traveling anyway.

“We should be more visible and have conversations. When we travel, we become ambassadors of our religion and culture. This helps us to break stereotypes and the people all around the world get to know us better,” Ashuri says.

When I catch up with Atamish, who is currently residing in Jordan, she’s preparing to apply for a Schengen visa to visit friends in Europe — for the third time. Her first two applications were rejected, despite her having invitation letters and meticulously prepared documents. She’s going through the process again, sending in hotel and flight reservations, bank statements, and invitation letters, but she doesn’t have high hopes she’ll get approved.

“I just wish I was seen as a human being, rather than a figure that could be dangerous for society,” she says.

“The world is big and beautiful — it’s not just about Europe and the U.S. Even if my visas get rejected, I’ll keep traveling, *inshallah*.”

*Didem Tali is a freelance journalist based in Cambodia. Follow her on Twitter (10) and read her stories at (14).*