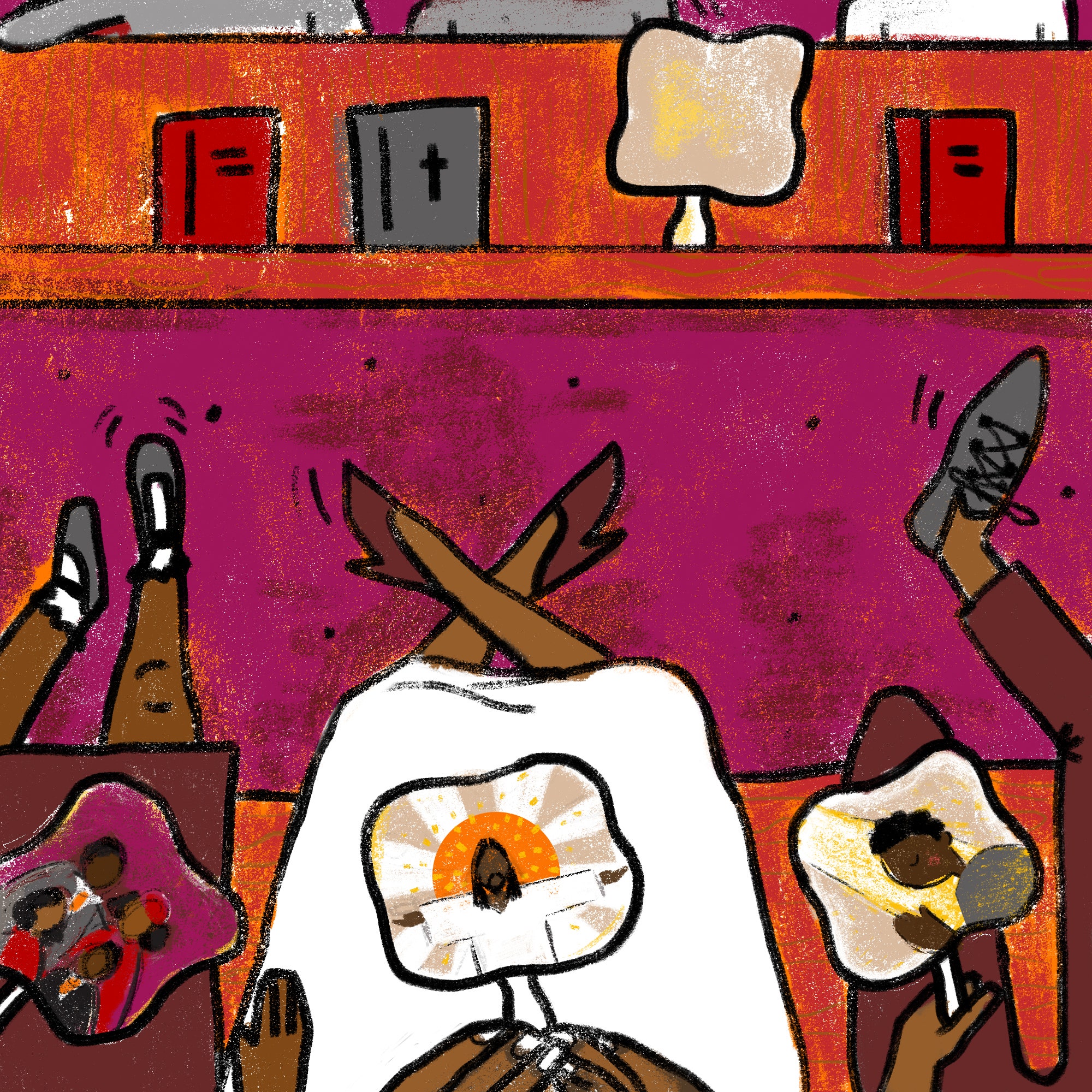 Burks Chapel United Methodist Church, one of those humble, three-room church houses, sits along a stretch of red clay in the backwoods of LaGrange, Georgia. It’s a small, unimposing structure, with plum trees out back, a hand-painted sign bolted down in the front, and a small choir stand inside; it sits on a green field with a small cemetery. It reminds me of the church Shug Avery (1) singing “God Is Trying to Tell You Something” in the movie version of *The Color Purple*.

My Big Ma raised seven children among the wooden pews and dusty hymnals and weekly fish frys of Burks Chapel. It was such a prominent part of my mom and her siblings’ upbringing that I can map out half of her childhood memories on the church’s land, which the original trustees bought for $10 in 1881. On the left are the fruit trees that my Uncle Cedric and Uncle Bo used to climb to get their mid-service treats. Close by is the stream that my mom would play near, dirtying up her church shoes and Sunday-best dress. The whole road, my aunties always tell me, would be filled with cars for the annual homecoming service every second Sunday in August, when cousins who had moved up North as part of the Great Migration came back home to visit family down South. There’d be a potluck picnic after service, with fried chicken and potato salad and, of course, Ms. Eleanor’s sweet tea. To this day, my family still honors that hallowed space and the role that it played in our foundation by going back to Burks Chapel every second Sunday in August.

Burks Chapel, like many black churches in the segregated United States, was an epicenter of African American social life. One of the few places where black mothers could let their children roam free; where traditions could be passed from one generation to the next. Yet the black church as an institution has an ugly and heartbreaking origin simmering just beneath its surface — one born out of slavery, a systematic demonization of native African belief systems, and the severe restrictions on black people’s interactions that made church houses one of the only places they were allowed to congregate. But, as black people have always done in America, we managed to transform something that originated as a tool for our oppression into something that fortified and protected us from that oppression itself.

There are many fair critiques that can be levied against the black church: its role in enforcing the patriarchy, homophobia, and respectability politics, for starters. But historically, it’s been an institution that provided a basis for community and fellowship among people who needed a safe space from the rest of the world, where something beautiful would be able to flourish. That beauty is evident in so many facets, from the soul-stirring gospel music to the resplendent church hats, to the hand fans used by the ushers to cool off “shouters” who had caught the Holy Ghost.

The fans were practical instruments that were necessary before the proliferation of air conditioning, but even after churches got their first units installed, many of the fans kept on swinging. Long after the scorchers of July and August, too; they swung on through December and January. The fans said words when the women were too overcome to speak, waving them furiously at the pastor when the sermon *really* got good. They were status symbols for those who were able to get theirs personalized or sport a different one to match their outfits each Sunday. They were silent metronomes, keeping the pace of the long services. They were something that everybody in the church used and had access to, but in the hands of black women — the ones who kept the church’s books and arranged for communion and fried chicken for later — they seemed to be something else entirely. A quintessential accessory for the prayer warriors who line the front pews; the women who made Sunday service seem like their only moment of respite from a week of child-rearing and clothes-washing and food-making.

I was unexpectedly emotional and nostalgic as I sat in Burks Chapel a few second Sundays ago, beholding the persistence of our culture over the years. It was the over-the-top antics from the pulpit; the women in pressed white uniforms and gelled-down French rolls; the little girls scribbling notes to each other on a tri-fold church program; and the cardboard church fans that, to me, were a perfect symbol of this particular part of black culture.

The protocol is to leave the fans there on the pews for next Sunday, but that afternoon, I left the annual homecoming service with one of those fans tucked under my arm. It was the start of my collection, which has now grown to five and serves no purpose aside from reminding me of my Big Ma and the institutions that women like her sustained for generations. Three of them are covered in religious imagery (prayer hands and Bibles and doves descending from Heaven), one is cut out in the unique shape of the National Museum of African American History and Culture, and another is from a Bayou Jazz Festival. I keep them stored away with some of my other keepsakes in the round velvet hat box that my Big Ma used to keep one of her Sunday church hats in.

The basic anatomy of a fan from a black church is no different from the ones they give out at white churches, grand openings, and political rallies. They’re typically made from coated board stock that’s affixed to a light wooden handle, usually with some sort of propaganda on front. But, like the black church itself, these little handheld fans went on to serve a purpose beyond their intended use, becoming an early vehicle for addressing issues of representation and the need for black people to see uplifting imagery of themselves. Often decorated with images of black children and families on the front and information for the local black-owned funeral home on the back, the eight-inch-by-eight-inch fans were also a way to encourage black dollars to support institutions within their communities.

I spoke with Marianetta Porter, an art and design professor at the University of Michigan, who echoed the same sentiment. “They were the first positive African American images that I saw. pre-*Ebony*, pre-*Jet*,” says Porter.

In 2003, she created “ (2),” a series of contemporary fans that emulate the styles, shapes, and layouts of the originals, existing as the artistic legacy of Porter’s days as a young girl going to church in South Carolina. She remembers being mesmerized by the images she saw on the church fans: families praying together, children playing happily, and national heroes like Mahalia Jackson and Booker T. Washington looking back at her. Most times, the advertisement on the back would be for a funeral home, but they also featured black-owned flower shops and insurance companies.

“I grew up in the ’50s, where the only things I saw were Africans running around like savages, or being parodies with big lips and eating watermelon. That was the dominant imagery for black folks,” she says. “Everything that the culture was telling me — that black families were dissolved — all of that was countered by the images on the fans.”

Porter began collecting the artifacts once she set out to find information about the historical significance of the fans and found a huge dearth of documentation about their place in black culture. Indeed, even an in-depth Google search doesn’t reveal much anthropological study about the items, though, Porter says, there is much to parse.

For example, after air conditioning proliferated in the United States, most white churches stopped using church fans. “But if I go to a church in Detroit this Sunday, the AC will be blasting, but there would still be fans,” she says. “Why are there still fans when they’re not needed to cool you off physically?”

Her research also led her to wonder about a series of black printmakers who, after World War I, were trained by the government on printing presses, which grew a whole community who might have been the ones printing the fans for black churches, as all sorts of businesses and politicians were using them as a portable billboard to advertise their merchandise, products, and campaigns by the 1920s.

She even began looking into their connection to Africa and other diasporic traditions and unearthed a few fans that had what she described as “really derogatory images on them,” like black people depicted with big red lips and other minstrel-like images. “Who was printing those? The same person doing the totally different imagery of black people?”

Her research did not conclude much but did prompt her to create her own fans with reflections about growing up in the South on the back.

But there is still something magical about the regular, down-home church fans that continue to circulate throughout churches like Burks Chapel, and they are still serving a purpose that goes beyond the obvious or religious uses. While there are no official restrictions on who can use them, those who know, know that they are given to the older women first; that an usher will take one from your hand to put it into Sister So and So’s. Yes, it’s a “respect your elders” type of thing, but to me, it also betrays a deeper sense of sisterhood and understanding. It’s a tacit acknowledgment that you may not get what you deserve out in the real world, but here, in ours, there is a small token of your highly regarded status.

One day, when I’ve earned it, the usher will make sure I’m comfortable in the front pew with my hand fan too.

I tried to get to the heart of this unspoken code with one of my aunts, who has taken over the matriarchal role now that my Big Ma is gone, and she acknowledged that yes, there was indeed something special about the fans, and that yes, they have historically been associated with the older women of the church, and that, for sure, they should be considered artifacts of the black South. But she also had a more simple explanation for why they’ve been around so long: