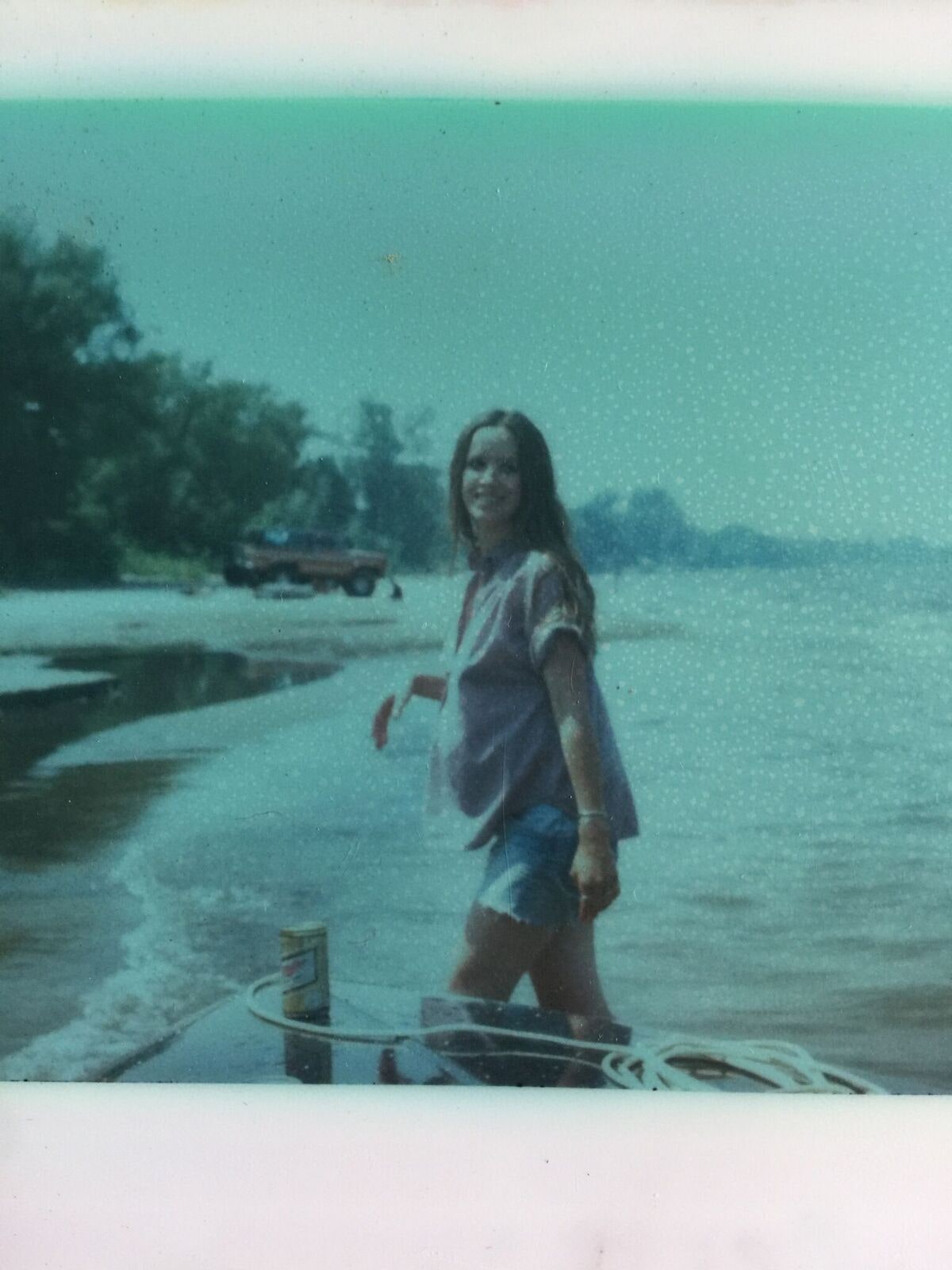 ​In my earliest memories of my mom, it’s the ’80s, but she’s a tomboy ’70s babe. I toddled around her, as tall as the high waist of the Wrangler jeans she zipped closed by lying flat on her back in bed and taking a deep breath. She wore either a purple “No Nukes” T-shirt or a red gingham shirt with fake-pearl buttons, and pointy cowboy boots or black Nikes with a white swoosh. There was something a little outlaw about her. No jewelry, but she would have a red bandanna sticking out of her back pocket that she’d use to cover her hair, or wet with spit and wipe me and my sister’s sticky faces. Never any makeup except a black Maybelline eye pencil she’d insert directly between her closed eyelids and furiously swipe back and forth. When she opened, she looked like Joan Jett, all feathered hair and delinquent eyes.

My father died when I was a baby, so when I was two, my mom put herself through tool-and-die school and became one of two female machinists in a small factory owned by my uncle. It was a low cinder-block building abutting freight railroad in a dumpy suburb of Rochester, New York. There were women working in the office with Aquanet hair and manicures, but my mom wasn’t one of them. She put on her work clothes — a chambray work shirt and Timberland boots — and worked a milling machine alongside the guys, filling the concrete floor with curly metal shavings. These men took my mom’s presence in their space, her femaleness, as a challenge, and she experienced what we did not yet know was called sexual harassment. They’d post half-naked photos of women or trashy calendars at their work benches, use the bathroom with the door open, and make crude comments. One time a coworker told my mom she was stealing a job from a man who needed it more, like a single mother of two toddlers didn’t need a job. Despite the odd issue of *Ms.* on my mother’s coffee table, she didn’t call these men sexist. She called them assholes, over burned break-room coffee.

She rebelled in the ways she could. Once I visited the shop and saw that my mom had posted a cheesecake centerfold of Dolph Lundgren on the women’s bathroom door. He was shirtless in his satin boxer shorts from *Rocky IV*, all ripply abs and mouth-breathing Communist smolder. My mom said she did it to get back at the guys for being “pigs.” Even at five, I doubted the men were bothered by Dolph in the way we were by the big-haired chick in a bathing suit humping a Ferrari on the door of the men’s room. He was just the dumb dude from *Rocky*.

Like my mom, I dressed like a tomboy, although I didn’t know it was called that then. In pictures of me as a toddler, I have round ruddy cheeks and dirt on the knees of my corduroys. I felt great pride in the fact that my favorite color was blue, although I knew this was a boy color. For Christmas when I was six, my mom gave me a small, red-painted toolbox containing a claw hammer, nails, several grades of sandpaper, and a book of woodworking projects for kids. One year, despite the fact that my sister and I didn’t play with dolls, some well-meaning relative gave us a “Barbie Loves McDonald’s” playset. Barbie wore a striped polyester tunic and puffy McDonald’s hat. She had a tiny spatula to flip burgers, while Ken sat at a lurid green bench awaiting his Big Mac. Even as a kid who considered Happy Meals the ultimate expression of parental love, I knew this was an extremely depressing toy. Maybe Barbie needed a woodworking kit.

Something changed when I started grade school. Suddenly, some girls were popular and some weren’t, and the difference seemed linked to how girly you were. Angela, who had flouncy miniskirts and older sisters who taught her how to do mall bangs, was the coolest, and we all imitated her hyper-speed Valley Girl speak and bubble letters. That year, my best friend Amy and I decided to get matching high-top Chucks: hers pink, mine black. The day we debuted them I felt cool as hell, but at recess, a boy I didn’t know came marching up to me and asked, “Why are you wearing boy shoes?” and shoved me. When comforting me, Amy said, “It’s OK, you’re just a little tomboyish,” and although I hadn’t heard the word before, it felt like an insult. I resolved to wear more pink.

I started to realize my mom was different than my friends’ moms, too. In first grade, our teacher asked us to interview our parents about their jobs and what tools they used to do them. My mom told me that she used a “CNC computer and milling machine” and assured me my classmates would think that was very cool and high-tech. I was confused when I realized all the other moms’ answers were different. My friend Kimberly proudly announced to the class that her mother’s tools were “a playpen, dishwasher, and bottle.”

I wish I could insert a revelation here about how I realized my mother was an independent, working-class feminist warrior, obviously so much cooler than those sad moms with their drop-waist floral dresses and their dishwashers. But I didn’t feel proud, I felt uneasy. The rules in my world were changing, and my mother could not help me navigate the new parts of it. I loved her, but I knew she would never teach me to do my hair.

So I figured out the weird business of being a woman without her. I never learned what the fuck to do with my hair, but I spent my teen years staring at photos of Ronnie Spector and can now do a credible winged liquid liner in my sleep. And despite brief, costumey forays into extreme girliness, there’s always been an element of tomboy in my look, ringer tees and Levi’s faded cornflower blue. Androgynous ’70s burnout is more or less my preferred mode of dress — early imprinting dies hard.

But besides her direct influence on my wardrobe, my mom showed me that there’s this whole other way of being a woman that TV and magazines don’t tell you about. I think she saw that femininity was a sort of useless trap and discarded any parts of it she couldn’t be bothered with. It didn’t occur to her to do it any differently. Watching her, I learned that dressing like one of the guys or doing a job as well as them won’t get you treated any better and in fact can make you a target. So you might as well dress how you want and give as good as you get, even if doing so comes with a heaping pile of bullshit. And I see now that the shit my mom took, she took for me and my sister, and I love her for it.

* (1) is a New York–based editor, writer, and Rust Belt escapee with lots of feelings about clothes and weirdly few about Drake.​*