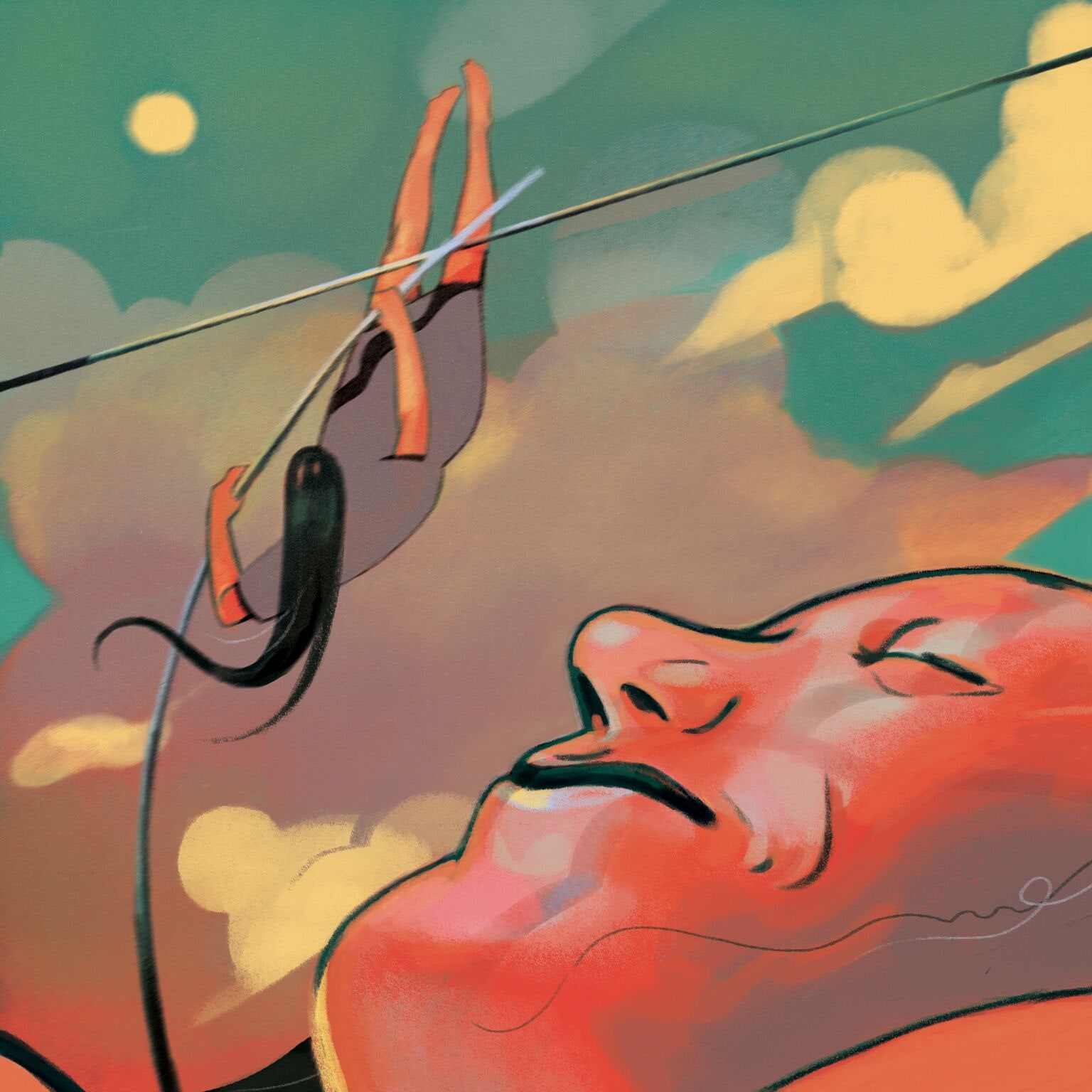 He looked at me with a tragic smile and said, “Fear not. We can do a lift. You’ll be just fine.”

He put his arm around me and said sorrowfully, “It’s time.”

“Is there anything less invasive than a lift?” I had heard about a nip-and-tucky kind of thing.

“And how long will that me last?” I asked.

He gave me a mirror, a hand mirror, under the brightest of fluorescent lights. It said MAGNIFIER X8.

I looked in. I got dizzy and started to gasp. Clearly, there was no way out.

In the mirror I saw a wrinkled, witchlike, scrunched-up, squashed face.

The mirror spoke to me menacingly, whispering in my ear. It said, _”Without any doubt, you are not the fairest of them all. You are not fair at all!”_

I put the mirror down quickly so Dr. Baker would not hear it.

“How long will it take?” I asked the doctor cavalierly. “This new me?”

“If you do an eye lift, two weeks. Without that, maybe nine days,” he said. “In any case, it varies. And you can tell them at work that you’re going on a vacation.”

And the hand mirror said, though indirectly, I had no choice.

I made a date for the new me, three months away.

And how awful I really looked! Why hadn’t anyone told me?

But then again, not everyone has fluorescent lighting and a X8 magnifying mirror.

Most of my age-appropriate friends said I looked pretty good.

But let’s face it, they had age-related dimming vision.

I left his office and hailed a taxi. My heart was still racing. Was I brave enough to go through with this superficial scalping?

To make matters worse, the traffic was awful.

I told the driver to slow down, please. He took it personally. He said he hadn’t had an accident in twenty years.

I explained, with my regular excuse, that I thought I might be pregnant.

He looked in the rearview mirror, and this is the truth, he said, “You don’t look like you could be pregnant.”

The driver must have been a plant. The cab had been too easy to get. Baker probably owned the cab company.

We laughed a little, the driver and me, and I told him he was right.

I admitted to a bad back and told him I was 48.

Lying about increasing numbers had become part of everyday life.

I remember nostalgically the days when I asked them to slow down because of my pregnancy, and taxi drivers would congratulate me and ask if it was a boy or a girl.

But there was no other choice. It was now or never.

This was the right time to eradicate the old me. I knew it.

I must be perpetually one age — and I picked 51 and six months.

This would be where I would stay forever.

You see, I must be young at any price.

I worked in media.

Nobody wanted advice from an old broad.

My bosses wanted a young audience.

Had it occurred to them that an older brain could think smart and young?

I thought most likely not.

In any case, I had to hide my age.

For those who knew the true number, they must be rehearsed to say, “My God, you don’t look your age!”

> What kind of woman would do this to herself anyway?

I told my husband and my son about my upcoming operation.

Each extolled my present beauty and assured me of my imminent death by surgery.

“It’s ridiculous,” my son said. “You’ll look like Michael Jackson.” My husband said, “You look fine just the way you are.”

Then, while waiting for this miracle, my Barnard College 40th reunion arrived.

I opened the door marked with my graduation year.

Old ladies glared at me through thick glasses. I closed the door quickly.

_This must be the wrong room,_ I thought.

Hadn’t they heard of contacts? Old ladies with advanced degrees and high IQs.

Barnard College was a place where brains were supposed to be more important than beauty.

I pretended that was true but never bought into that philosophy.

I opened the door again and walked bravely into the room.

“Oh my God,” said an elderly classmate. “You look exactly the same as when we graduated.”

This old lady was me as well.

And we were lying to each other.

After a sleepless night, my superficial self arrived at Dr. Baker’s office at 5 a.m.

In addition to being fearful of the anesthesia and ultimately of my death, I was betraying my liberal, earnest, ’60s self.

Could this artificial mannequin be me? Could this still be the Woodstock, March-on-Washington, antiapartheid liberal? Could I be this deceptive mid-50s liar? Lying to taxi drivers and trying to keep seven years at bay? What happened to the honor system?

I moved on to the gurney.

I was then prepped by an annoying nurse who gave me enough Valium that I would have allowed the Boston Strangler to do the operation.

I had given my life to vanity.

Here I was — brainless, vain, terrified.

The last thing I remember is being too drowsy to run away.

What kind of woman would do this to herself anyway?

I awoke several hours later, seemingly alive, with a helmet wrapped around my head and swollen eyes, and immediately puked.

I was given apple juice in a paper cup, a saltine cracker, and the mean nurse who would take me home. It was a package deal.

She was even older than me and looked at me as if I were a foolish and frivolous female.

Ratched clearly had done this many times before and did not approve of “rich bitches who lie.” She coldly washed the dried blood from around my eyes.

Blasé, she had seen it all.

She knew how shallow I was.

We spoke little, and as soon as her shift was up, she left me alone with my face.

This new face was black and blue. These new eyes were swollen. The punishment was severe.

I had earned this suffering and had even spent money on it.

I informed the office that I was on vacation.

“Hades,” I answered, and they laughed.

And so it came to pass that the turban was taken off, the staples removed, stitches pulled, blood gone, the face refreshed at a price too dear to explain.

_Sheila Nevins is the president of HBO Documentary Films. She is also a_ New York Times _best-selling author, the winner of 32 individual Primetime and 33 News and Documentary Emmy Awards, 46 Peabody Awards, and 26 Academy Awards._