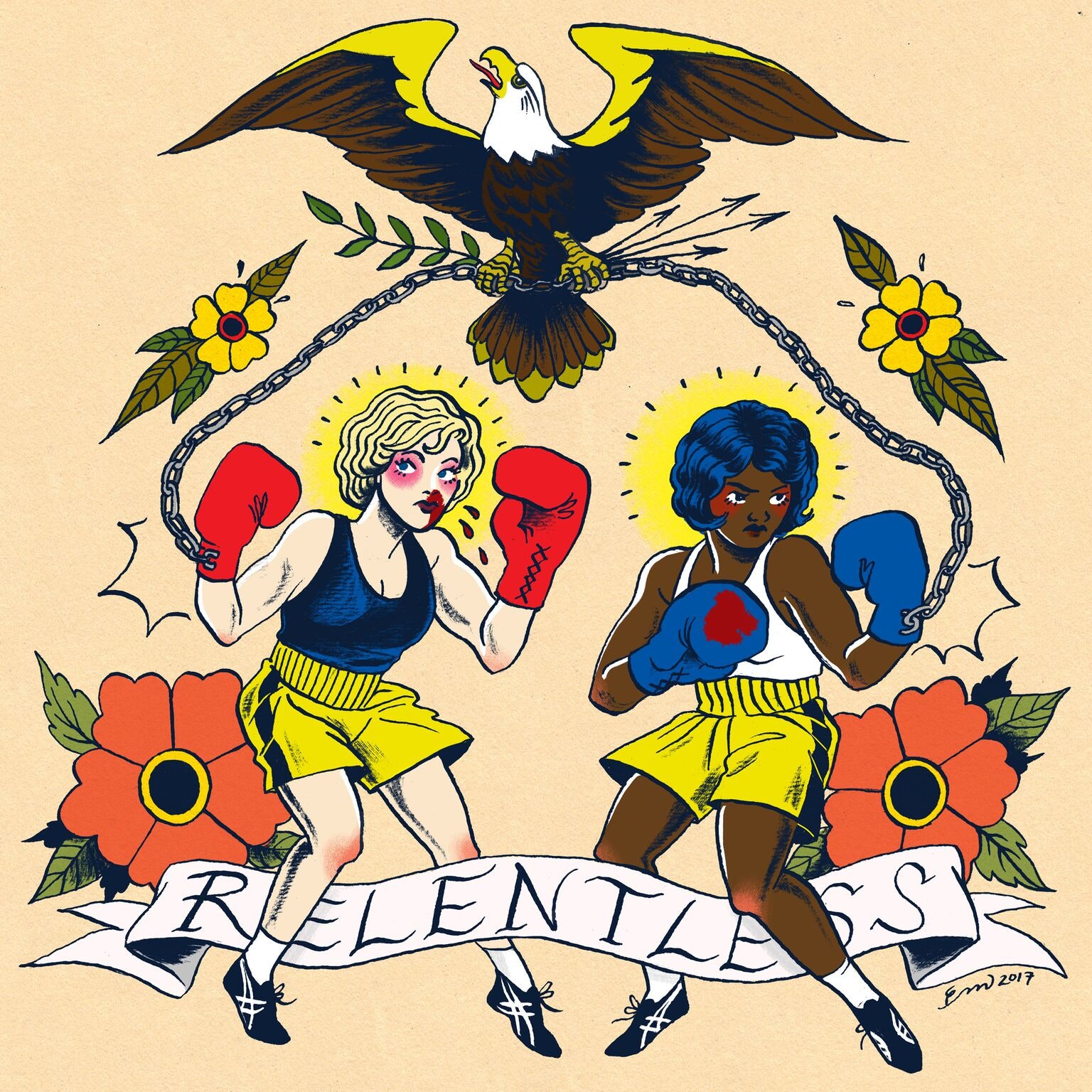 Before I joined the Army, my parents had not allowed me to do karate. They thought that the fighting arts were too physical for my clumsy body and not entirely appropriate for a girl. During my initial enlistment at Fort Monmouth in New Jersey, I joined a boxing club to overcome exercise plateaus and improve my fighting skills and learn how to dodge attacks from an opponent. For the first time in my life, I had the self-confidence and strength to enter a fight and not back down. I wanted to keep feeling that way, forever.

In the summer of 2009, I entered West Point as a plebe (freshman) and tried to take Plebe Boxing, at the time a requirement for all male cadets. However, the administration stated it “wasn’t safe for women” and that all female cadets had to take Female Combatives, an alternate course. Unlike boxing for the men, Female Combatives was broken into five different units of fighting styles (judo, grappling, boxing, wrestling, and military hand-to-hand); while female cadets were introduced to more than one martial art, they had less time to learn and practice within a specific area. Because female cadets had to learn five different styles and were expected to become halfway decent with very little time, they were unable to build self-confidence and get over beginner’s fear, something that is focused on in the boxing class but not in the fighting class women took.

Although I hated the Combatives class, I was undeterred and found a group of like-minded female cadets who wanted to box, and we trained together after hours. We called ourselves the Underground. The senior who led our group fought on our behalf with the administration, trying to gain recognition and allow us equal use of the equipment. But the male officers and administrators refused to listen, saying we would hurt ourselves, that we couldn’t handle the pressure, and at one point claiming we would be too smitten with the male boxers to concentrate on our training. Finally, the senior persuaded them to allow us a slot in the annual Brigades, a boxing competition technically open to the entire Corps of Cadets, but at which only men competed. However, they would only allow one fight, between me and my friend, B.

I had met B. through the Underground, and because our heights and weights were similar, we were matched up for sparring. She was older than me by several years, having enlisted and done a tour overseas before coming to the Academy. She was a more experienced, and hence better, boxer than me; her hooks and jabs were very technical, always hitting the mark. I was the brawler, not as controlled when throwing a punch but fighting through the hits and blood (I have what is called a glass nose, meaning it bleeds easily when hit, so just about every match ended in a gusher for me). When we weren’t beating each other up, we often exercised together, running or lifting in the gym. We were excited to represent the women’s team in proving our worth to the men.

The lead-up to the fight was fraught; twice the men’s head coach tried to block us with loopholes or regulations, even going so far as to make B. and me fight practice rounds to prove our competence. But we prevailed and fought in the Brigades. Our fight was the biggest draw of the event: cadets and officers packed the small gym. As the better boxer, B. took the victory with more points, but I knocked her down with a hook. After the fight, we thought for sure the Underground would be recognized. We were wrong. They still wouldn’t let us join the men on the team or form our own.

Their reason? None of us had taken Male Plebe Boxing.

Now, as I mentioned, only the male cadets took boxing. In fact, it was the only boxing course held at West Point; to graduate, men had to pass this class, and it was usually only taken during the first year. Afterward, unless they joined the team, male cadets never boxed again. And since women couldn’t take the course, the administration used it as a technicality to reject our application for team status.

But then fate stepped in.

Due to a computer error, B. had been assigned as a male in the system and was automatically slated for the class in spring. Knowing this, I visited the offices, where it was just the secretary, and asked to enroll in the class. When she said no other woman was taking the class, I told her to look up B. Seeing the female name taking the class and thinking it was approved, she put me in.

Either no one bothered to check or the scheduling people were on our side, but come spring classes, B. and I showed up with our schedules, and the instructors had no choice but to let us in. They had only one rule: the women would fight only each other, no men.

The first three classes are spent on the floor shadowboxing, learning the basic movements: jab, cross, and hook. When the time came to pair up and actually hit, our instructor put me and B. in the ring, grudgingly admitting we had “some experience,” and told us to hit at 25 percent. The men, having never fought or trained, were to hit at 10 percent. There was just one problem: the male cadets were too scared. As we practiced, the instructor yelled out “Punch, damn it!” and “You two in the ring, slow down!” for five minutes straight, until finally he blew his top.

“For God’s sake, you motherfuckers, Pendergraft ate it for three fucking rounds! And she’s still eating solid food! Now stop being pussies and hit each other! And you two in the ring … don’t kill each other.”

After that day, the instructors’ attitudes changed. Now, B. and I were brought forward to demonstrate movements. When they did an exercise known as the Round Robin, we were allowed to punch the men. The first time I stepped in the ring with a guy, it took three hits to the face before he realized I wasn’t going easy on him. Then he and the rest of my male classmates stopped going easy on me.

During the last class, the instructors brought B. and me aside to inform us of our grades: B-. Frankly, we were surprised. We fully expected an F, or a D if they didn’t want to be accused of bias. What shocked us next was our instructors’ apology. They had wanted to give us A+s, as befitting the best boxers in the class! But the head coach and administration had found yet another loophole: having fought only each other in the graded bouts, B. and I had not shown improvement or tenacity in facing a different opponent; a B- was all they could give. But we didn’t care. We were the first; we had opened the door.

Sadly, the women’s boxing team did not fare as well as we did. The administration still wouldn’t let us join the men’s team, but we were allowed to form our own as a “hobby team.” But this meant we could only use the boxing equipment after the men’s practice. And we weren’t allowed to talk or socialize with the male cadets on the team, as they believed it would lead to fraternizing (sexual relations between cadets) and potentially destroy morale on both teams.

Over the years, the team itself suffered from a lack of support both internally and externally. In the end, I left the team my junior year, as training under impossible conditions and fighting among team members took its toll on my academic standing at the Academy. Ultimately, I had a choice: be a boxer or graduate from West Point. I chose graduation. I wasn’t the only one who quit, and our former teammates would avoid me and the women who left, instructing the younger members to not talk with us. It was as if all I had fought and sacrificed for no longer existed.

After my class graduated in 2013, the team broke up, and it seemed as if women’s boxing at West Point was just a blip on the screen.

Then, in December of 2015, Brigadier General Diana M. Holland, West Point class of 1990, was named the 76th Commandant of Cadets, the first female to be the ranking officer over the Corps of Cadets at the United States Military Academy. And by the start of the 2016, Male Plebe Boxing simply became Plebe Boxing, finally integrated after 199 years. According to General Holland, she had wanted to box as a cadet but couldn’t take down the administration.

It has taken a long time, but female cadets are now training with the expectation they will enter the combat zone, and all plebes must pass boxing if they are to graduate. I’ll admit, I thought I wouldn’t see a female Commandant of Cadets until my year-group started reaching the upper echelons. Seeing a woman from a previous generation shows we are further along than expected, that equal status is gaining ground, however slow it may seem. And while I don’t miss my cadet days, I envy the female cadets who are taking Plebe Boxing now. They’re not boxing because they have to prove they have the right to be in the ring but because they want to graduate from the United States Military Academy. And I know they are kicking ass.

_S.J. Pendergraft is an Army vet with lots of stories to tell. You can read her column “Webcomic Wednesdays” at capelesscrusader.org._