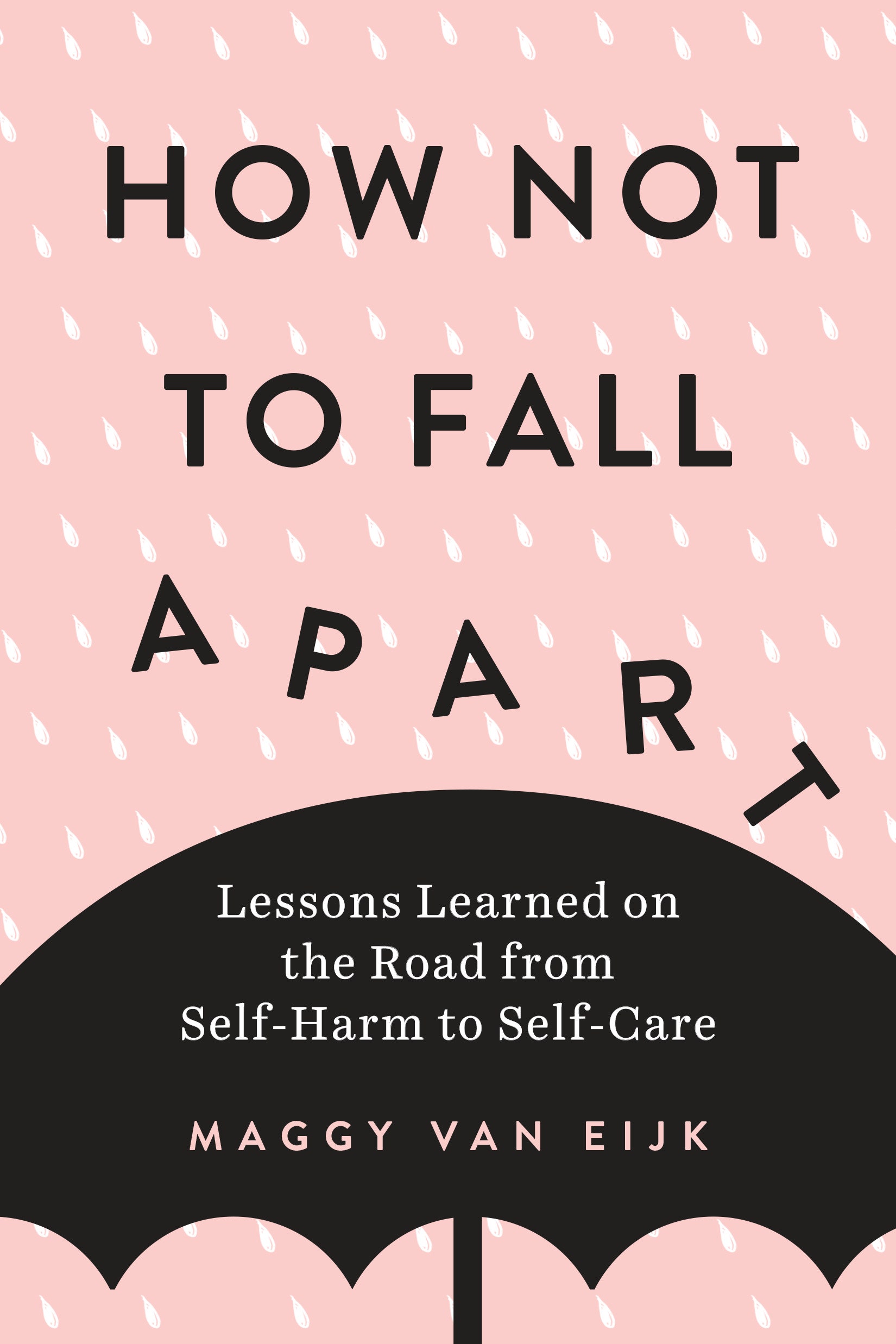 Keeping everything locked inside, hidden from view is a bad idea, I’ve known that since I was a kid. When I was bullied, I’d swallow all the rage inside me, shut myself in my room, and just sit there. The rage had nowhere to go. I hated those kids, but I didn’t do anything about it. I stored all that anger inside me until it began to turn on me. *This is your fault. They’re right. You* are *dumb. You* are *fat.*

That penchant for silence and bottling things up has cropped up in my work life as well. The tasks keep piling up, but everyone assumes I’m doing fine because I sit at my desk every day and I smile and say hi to people who walk past. In fact, I’ve probably woken up that morning with extreme dread in my chest. *I don’t want to be at work. I don’t think I can do it. I’m not cut out for this.*

One morning, when I worked as a social media editor at BuzzFeed, I reached a new limit. My levels of stress and exhaustion hit the summit. Instead of asking for help, calling in sick, seeing the doctor, or even picking myself up and getting through the day, my mind and my body said, *enough!* They were finally working together, but not to my benefit.

I woke up and it was obvious: I wasn’t going to go to work. I couldn’t. I couldn’t see the point. In fact, I couldn’t see the point in blinking, breathing, or thinking. Nothing worked. I lay on top of my duvet and tried to will dying on myself. I wished for a secret power where I could shut my eyes and end it all. In my head, time was passing in slow motion, but in the real world, things were ticking along as usual. My managers at work were extremely worried. They called the police to show up at my house. My family was called. My ex-boyfriends. While I lay in bed trying to hold my breath, I caused complete and utter chaos around me. Around 3 p.m. that day, I took a deep breath and pushed my upper body upright to check my phone. By then it was too late. I couldn’t go into work. I had well and truly fucked up.

As you might imagine, the aftermath wasn’t good. Instead of using this opportunity to be honest, I opted for the usual: silence and sugarcoating. I blamed food poisoning and extreme tiredness. No one believed me. I told lie on top of lie and caused far more damage than I had to begin with.

Later, things escalated and became much worse. I’d been suicidal for a month. I couldn’t speak without crying. My skin was red and blotchy. My hands were shaking. When I finally approached my managers, I’d made a list of things to say to them, but I couldn’t read the letters through tears. They told me I could go on an early lunch break, which I took eagerly. I walked around Soho hoping to find something that would tell me what to do. I lit a cigarette and pressed it against my skin, but stopped before it made contact. I couldn’t do this again. My scars had just healed. I’d only just stopped wearing my bandages. The cigarette hung suspended in mid-air. I couldn’t stop thinking about harming myself. Every item on the street looked like a tool I could use: a piece of glass, a window I could smash, a bus I could jump in front of.

I took a breath and let a different part of my brain take over. I needed to get help. I texted my managers that I couldn’t come back to work and went to the ER. Using a voice that seemed to come from some alien part of my body, I told the nurses I was worried I was going to hurt myself. I’d been seen here before for self-harm wounds and I didn’t think I was safe in my own company.

I felt like I wasn’t me anymore. I was just a hollow bit of flesh, handing myself over to someone else’s care. They looked after me, transferred me to a mental health unit, and released me in the evening. There weren’t any beds available, but I managed to convince them I was going to be OK. I had a friend’s house I could stay in. I’d see my counselor the next day. At this point, I was just too tired to do anything self-destructive.

The following week I came back to work, and thanks to the support of a few colleagues who were aware of my mental health issues, I decided to finally tell the truth. I hadn’t been looking after myself, and my mental health was faltering. I wasn’t fired, but I was given an official warning, and in what ended up being a great result, my employers took some steps to make sure that not just mine, but also other people’s mental health, would be better supported in the office.

I should’ve felt relieved that I still had a job, but I was still so desperately ashamed. Going into work was even harder than it had been before. I felt marked. I felt like I’d let everyone down. Then, to my surprise, a more senior colleague took me to lunch. I knew that he ran (and continues to run) a support group for people with bipolar disorder who work in the media. I’d spoken to him in the pub once vaguely about my issues, and I think he saw straight through my deflections and jokes. When I came back from work after a few days of absence, he asked if I was free.

We went to a Korean restaurant near Oxford Circus. I tried to be happy and grateful that someone so senior wanted to spend his lunch with me. I didn’t want to talk about my fuckups, I didn’t want to launch into some kind of dramatic monologue about how much I’d messed up my career, but I took one bite of my kimchi and blurted everything out. He listened and said two things that I’ll never, ever forget.

“Yes, you fucked up,” he said. “But ultimately it’s just a job. You can find a new one.” I know this seems bizarrely simple, but so much of my identity was tied up into this role and making it work—without it I didn’t know who I was. If I was fired, how would I pay my rent? How would I eat? What else could I possibly do?

“You have to be your own spokesperson, because if you don’t do it, no one else will.” When you have a mental illness that impacts your daily life, you not only have to deal with the fallout from that, you also have to be there to clean it up, to defend yourself, to tell everyone this is not your fault. When you need support, you have to go out there and get the help you need. You have to call various mental health services and get yourself an appointment. If they’re fully booked, don’t give up. Ring someone else. Try another service. You have to keep going. It’s important. I knew this, but part of me was waiting for someone else to save me, someone who’d swoop in and do all the calling and organizing for me. But, at that point, I’d alienated so many people that it was really just me, by myself. I had to get myself better.

From that lunch on, I tried to be better at being my own advocate. If I needed a day off from work because depression was crushing my skull, I’d ask for it. If I needed to see my doctor again to up my SSRI dosage, I’d give them a ring, and another ring if they were busy. I arranged to have another psych assessment, which was a massive headache to reschedule. I did it anyway. I had to.

When you’re starting out in a new job, it’s so hard to figure out how much you should disclose about your mental health. Bad mental health isn’t fucking up though. In the UK, a lot of conditions are protected from work discrimination under the Equality Act. The Act isn’t there to tell you you’re not normal or good enough to join the team. It’s there to protect you when you’re afraid your mental health is costing you your career.

It’s up to you when you decide to tell your employer about any of your conditions, but from my experience the earlier on the better. If you wait till you’re in the midst of something and crisis has struck, you might not be as articulate as you’d like. Things might get emotional and complicated. There’s also a chance your employers will feel misled: “Why didn’t she tell us about this before?” Then of course there is the off chance that despite all the precautions you have in place, something boils up and *boom*, you can’t sit through a single meeting without welling up.

There’s a societal failure at present in adjusting for mental illness at work. Whereas in the past I’ve had no issue calling in sick because I have the flu, I’ve dragged my depressed body to work a number of times. It was only when I became honest about my situation that I was able to manage my work balance far better. I made a list of what I needed from work, which wasn’t a lot. I needed to leave early on Wednesdays to make it to therapy, and I needed to work from home on occasion if my anxiety or OCD had flared up. The more specific you are about your requests, and why you’re making them, the better. For example, my medication can make me feel quite groggy, so working ten to six is better for me than nine to five, as I can make sure my mind is alert before I start the day. I’ve worked in big open-plan offices that would give the most rational person a dose of anxiety, so I like the freedom of being able to move to a quieter room (usually an empty meeting room) so the noise doesn’t make my brain whizz around.

Some workplaces make it easier to ask for these adjustments than others. When I joined the BBC, I was amazed at all the flyers and posters advertising mental health support and helplines and people you could talk to. It made approach¬ing my own managers that much easier. The language around mental health is plastered all around the building so it makes it less of a big leap to start those conversations. Having said that, you can be in the most understanding workplace ever and it’s still hard to get that dialogue going. When I found myself in a position where I was leading a team, I’d try to be as open as possible and say, “I’ll be late because I have to see my counselor” rather than the usual white lie of “dentist” or “my boiler broke.” It’s not for everyone to be this open, but it’s important to me to use my own voice to make workplaces more understanding. It’s not been a perfect ride, and I’m sure I’ll encounter more issues as I go along, but I do know that living in secrecy is detrimental to my mental health and makes me a crap coworker too.

*Maggy van Eijk has written numerous popular articles about mental health for BuzzFeed and elsewhere. Currently the social media manager for the BBC, she lives in London.*

*Reprinted from* (1) *by arrangement with TarcherPerigee, an imprint of Penguin Publishing Group, a division of Penguin Random House LLC. Copyright © 2018, Maggy van Eijk.*