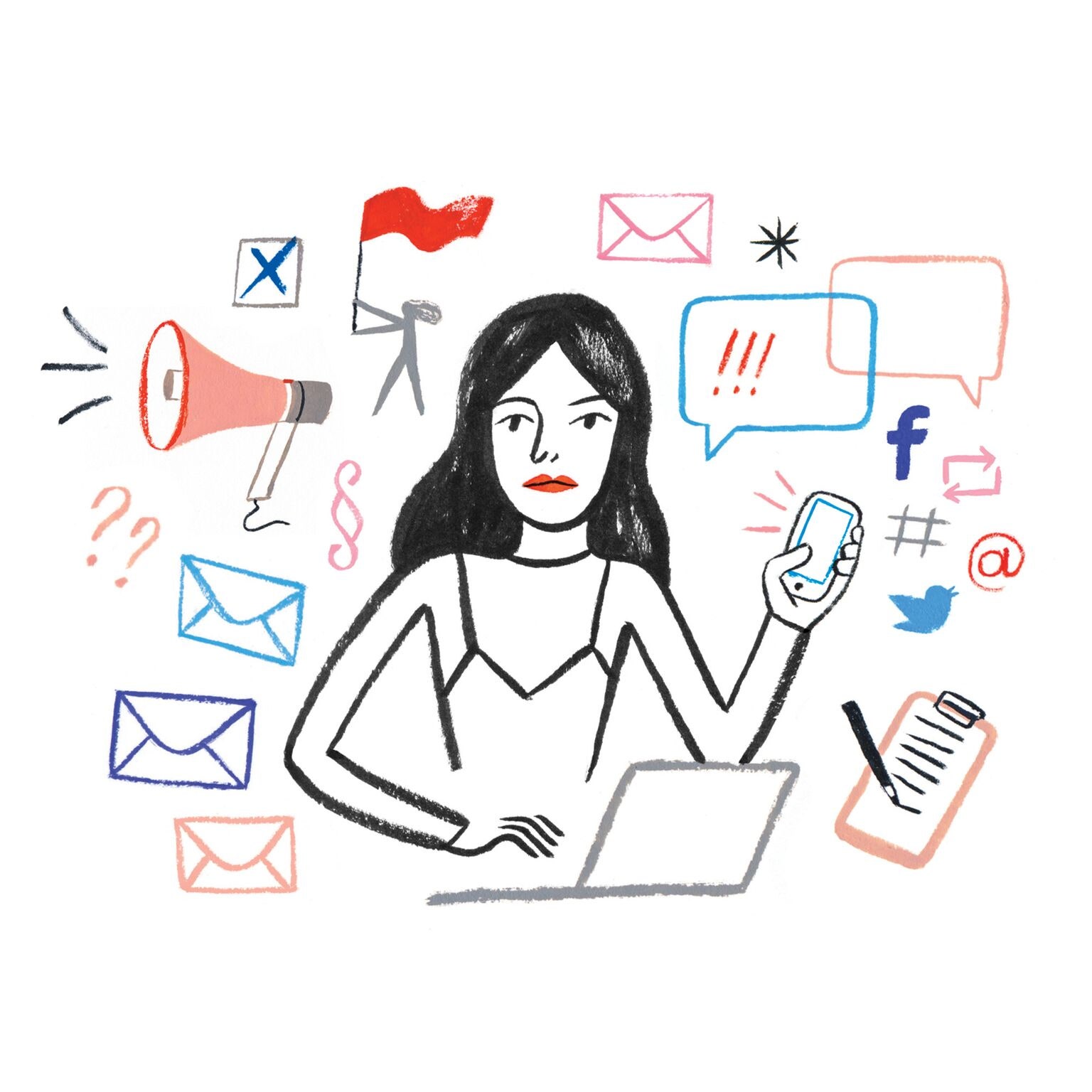 Months ago, (1) Agnieszka (Aga) Guzdek of Krakow, Poland, about and during the successful Coat Hanger Rebellion, in which thousands of black-clad women, men, and children left their work, their homes, and their schools to strike after a bill was introduced to Poland’s right-wing parliament that would forbid abortion in almost all circumstances. Under the proposed law, anyone who underwent an abortion — no matter their circumstances — would face imprisonment, as would doctors and nurses involved. But because of the voices and actions of Aga and her fellow protesters, the bill wasn’t passed. It was terminated.

Aga works for a successful educational start-up. She’s a single mother, a brilliant photographer, and an avid member of protest circles in Poland. Her relation to the protests is purely personal; she’s not an organizer, but she does know many of them because she’s been working for various nongovernmental organizations in Krakow; it’s a small and familiar bunch of people.

We are currently seeing a flurry of vaguely authoritarian executive actions that threaten the rights of the American people and what our constitution stands for, from the order to obliterate Obamacare to the global gag rule on abortion, to the international travel ban and suspension of refugee programs, just to name a few. When the president’s men began calling the media “the opposition party,” I knew it was time to talk to Aga again.

Although the reproductive protests have abated temporarily after the success of the Coat Hanger Rebellion, Polish citizens are continuing to strike. Poland is experiencing its most severe constitutional crisis since the Communist regime declared martial law in 1981 **,** and Poland’s ruling party is continuing to attempt to make democracy disappear. During the fourth week of Donald Trump’s presidency, Aga and I talked about how to communicate with other resistors, who to turn to, where to draw the line, and how to protest better.

> It is us against them, and “them” can be anybody, neighbors from across the border, people of a different skin color, different orientation, different culture.

**Mira Ptacin:** Can you give me some context about Poland’s government and share any parallels you’ve been able to draw between the United States and what has happened in Poland?

**Agnieszka Guzdek:** Poland once aspired to be the 51st state. But as I watch the news lately, it seems that the United States is becoming a second Poland. This makes me feel sad, sorry, and angry. Trump is repeating the steps of Polish government. He’s making changes in law quickly and thoughtlessly. (2) I hope that it doesn’t happen to the United States.

We’ve been dealing with a right-wing government for over a year now. The connection between the ruling party and the Catholic Church is closer than ever before. Our Constitutional Tribunal (constitutional court) is the highest law of authority. The current ruling party never accepted nominations to the tribunals done by the previous government, but according to Polish law, it should. Instead, they chose their own judges. Now the rulings of the Constitutional Tribunal are completely secret and cannot even be filmed.

Television stations are manipulating the real facts (for example, showing just part of demonstrations rather than their entirety). Only public television and radio speak the whole truth. Many TV and radio presenters have been fired and replaced by those who obey. The Trump administration calls your media “liars” and “the opposition party” and is attempting to silence them, too. The Polish government has banned media from the parliament, and a single party now controls the executive and legislative branches.

In our education system, we have a new bill for schools that says children will have the same amount of religion (Catholic) and history (the one and only “true history”), more than biology, chemistry, and geography put together. There is no mention about Lech Wałęsa in any of the schoolbooks — he was a winner of the 1983 (3)!

The official book for sex education is prepared by a woman who is known for saying things like “Contraception leads to licentiousness.” Although we won the first battle against cruel reproduction bills, the fight is not over. As of February 15, the birth-control pill is back on prescription (it had been available over the counter), and in Poland you have to wait a while to visit a public doctor. Also, the bill banning all abortions is still in parliament, so we will strike again on March 8 as a part of the International Women’s Strike.

Hate speech is heard everywhere here in Poland, too. It is us against them, and “them” can be anybody, neighbors from across the border, people of a different skin color, different orientation, different culture. Nationalist organizations are invited to official state gatherings. Nationalists wearing symbols of Nazi Germany were seen in churches. And our government recently passed a bill in which church and state gatherings have a priority over those organized by the people — the Polish government is basically taking back the right of people to gather. I could go on and on here.

**MiraPtacin:** How did participants in the Coat Hanger Rebellion communicate with one another when organizing marches?

**AG:** The groups that gathered in Krakow and protested in Krakow communicated through Facebook. We also produced leaflets and placed them in public transport or behind the wipers and generally in public places.

**MP:** What else can we do besides marching?

**AG:** Petitions, writing letters, and being present everywhere that there is wrongdoing.

**MP:** How do you manage to keep your energy up? I’m worried about protest fatigue.

**AG:** I feel that is my obligation. I feel that I am not only doing this for myself (I refuse to live in the dream world of our government) but I am also doing it for my son. I’m doing it for all my friends’ children and my friends — even though they sometimes disagree with me. I feel that we are fighting for fundamental rights of every person, and this keeps me going.

>Divide and you will win; there are more of you than the president, government, and its supporters all together.

**MP:** Do you have any advice on what specifically to focus on when there’s so much wrong with Trump’s agenda?

**AG:** I understand that you may feel that you don’t know were to start. From my perspective, you should divide. Find people who will deal with women’s rights, find people who will deal with economy, law, education, immigration. Divide: no one can handle everything. We have wonderful nongovernmental organizations that take care of some of the issues that the Polish created. Divide and you will win; there are more of you than the president, government, and its supporters all together.

**MP:** What are some ways we the people can fight back against disinformation and the attacks on the media?

**AG:** I chose one newspaper that I read. I don’t watch television, and I subscribe to many Facebook channels about politics. I try to check things. If there is information about changes in law, I try to read the text of the law itself. If it is too difficult, I turn to some organizations or people who will explain or already did, so on their website or on Facebook. I learned that I have to look for people that I can trust. It helps. The official Polish media is just crap; I don’t have a single friend who listens to it. The only problem is the people who do and believe in it. This is the real threat. I don’t know what to do with that.

**MP** :What do we do if the protests and rallies don’t work?

**AG:** Protest some more. I don’t know. I think about that sometimes, and it makes me panic. I never thought that I would be encouraging my son to leave this country, but if things will go as they are going, I will tell him to leave. Our government is ruining everything: education, social-security system, health system. So basically I don’t know what to do. Wait it out to the next elections? But they won’t change the election system. We do have some successes, so I hope that there will be more to come.

**MP:** What do we do if Trump continues to fire anyone who gets in his way?

**AG:** Shout it out to the world that this is wrong. That you disapprove. Everywhere: media, social media, TV shows. I know that some of the TV celebrities are against him. Use that. I know it would be hard in the United States to shut down the media.

**MP:** How uncomfortable and inconvenienced were you willing to get when you were rallying? How does this work, and how do we persuade our fellow Americans to take the next steps in the resistance?

**AG:** I would personally go very far. I hope I won’t have to . Explain, talk, reason, give examples. For most people, politician talks do not mean anything. I was there when the whole pro-choice movement became visible in Poland. I had to explain to my friends what it meant, but it became a snowball effect. I talked to five people, and those five talked to five more. You just have to keep talking, explaining, and going outside your bubble. I know it is hard. I have been called murderer in the past months. I don’t care, because at the same time I know I made a few people think.

* (4) is the author of the memoir* Poor Your Soul *(Soho Press) and the forthcoming nonfiction book about clairvoyants in Maine,* The In-Betweens *(Liveright).*