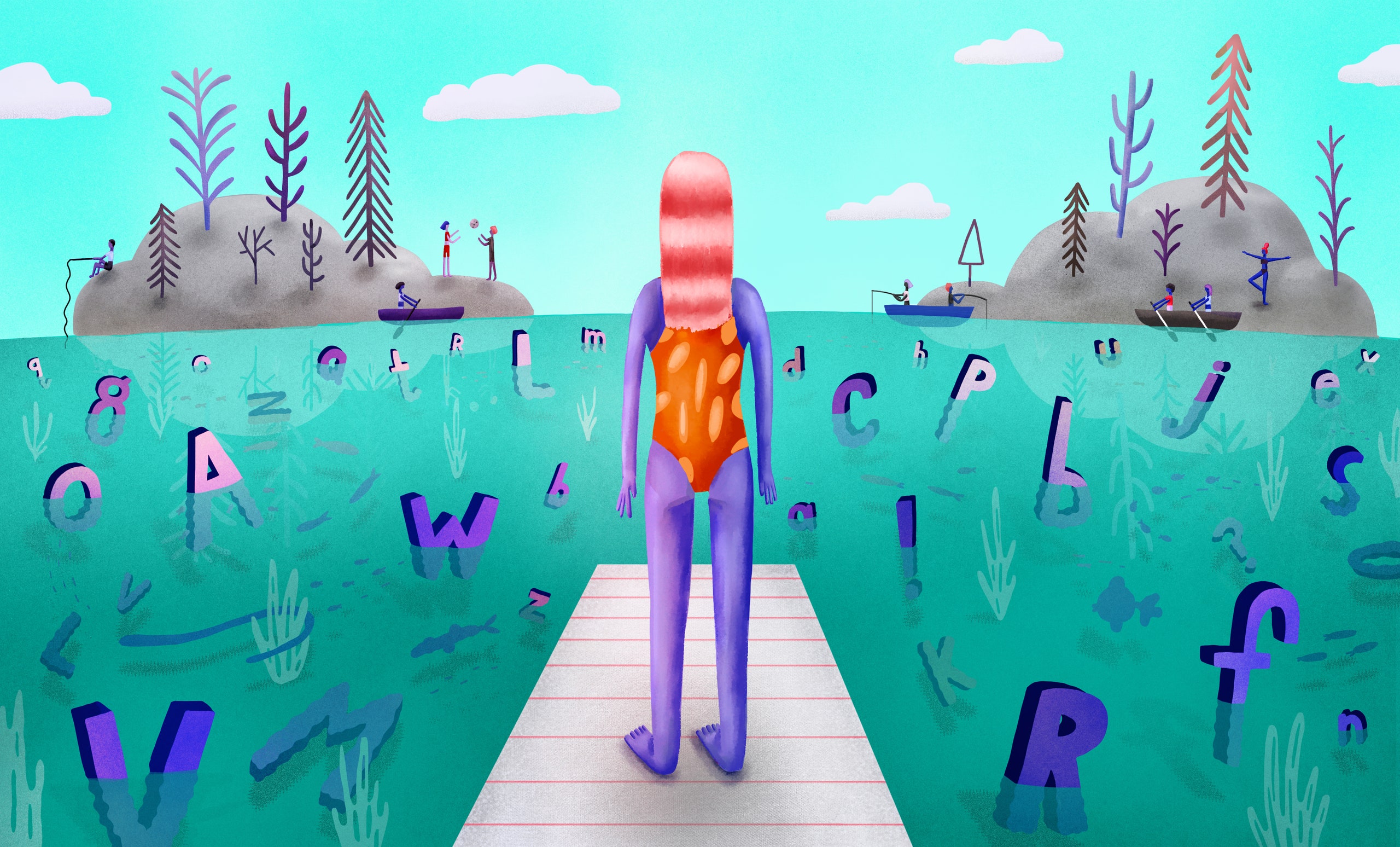 *Hate* is a strong word. But when I repeatedly, vocally declared my hatred of camp, I meant it with every fiber of my young being. That was my voice, my truth. In my diary, however, I laid the praise on thick to appease my imaginary audience: “Today I went to camp. It was fun. First me and my friend and my counselor went into a canoe and we tipped! It was wicked fun!” Yeah, I remember that fucking canoe. It was not fun. When you’re a child, you’re an unreliable narrator, and you don’t even know it.

My first summer torture sessions were long days at this woodland camp about twenty minutes from my home. I was eight years old, young for my grade. This was the summer after I got a checkmark on my report card in the “Plays well with others” box. Let there be no mistake. A checkmark is not a gold star. In a group of strangers, I played better with my toys.

Right off the bat, camp and I were a bad fit. The experience tapped into my issues with authority figures. I didn’t believe in the “trust exercises” because I didn’t feel safe. The counselors weren’t teachers. They were teenagers. Like in *Porky’s*. I liked my leaders to look like adults.

I especially loathed the part of the day where we had to change into our bathing suits. Like it or not, strip, little bitch, *strip*. So, of course, I lied about having my period to get out of swimming. I look back now, remember the dank air in that little medical place in the woods, and think of the poor nurse who had to deal with me.

Nurse: “So, you’re getting your period?”

Nurse: “Should we call your mom?”

That nurse was kind. She let me hang out in there for a while even though she must have known I was lying. There was no blood. I didn’t even have the wits to ask for some kind of feminine hygiene product. I didn’t fucking know how periods worked, exactly. I was little. I had yet to read *Are You There God? It’s Me, Margaret*. But I did have a dollhouse, and there was a lot of crazy shit going down in there. A secret room occupied by a Glamour Gal who wore a gown at all hours; a G.I. Joe action figure recast as a domestic bellhop/pot-stirrer. Making up stories on my own was empowering. It’s when you do it in real life that you get into trouble.

One day, a counselor asked if I was *psyched* for the day, and I nodded. I remember that moment so vividly: the pressure to respond, to be *psyched*. I remember other kids singing the Tears for Fears school-bus power anthem “Shout.”

I felt like the opposite of that song. I was overwhelmed with a sense that I had signed a social contract to lie without even realizing it. Everyone was so fucking *happy* when I looked around, and I felt weird for not being psyched. I had never used the word out loud before. It was a word other people said.

So of course, I repeated the word in my response. “Yes,” I said. “I’m psyched for camp.”

I sounded stupid. Like, very stupid. It’s not that I mispronounced it, but you could tell that I’d never said it aloud before. Of course she laughed. Hard. Loud. In my face. I don’t blame her. When you’re vulnerable, you’re fodder. Especially on a hot bus. No doubt she had her own web of anxiety with the other counselors. And my inability to mask the misery on my face served as her comic relief. I was never good at hiding my feelings.

It was an early lesson in voice. Something I think about every day when I write.

*What is my voice? What is this character’s voice?*

We all sound a little goofy or off when we’re not being ourselves, especially when we’re writing, trying to tell the stories in our head. But it’s part of the process, the part I love the most, the part that hurts the most. To spend six hours writing and to have that sense that you’re nailing the voice, so you go celebrate a little. You enjoy the high of having accomplished something. Then something shifts in your mind. The clouds roll in on your sunny spirit, and it’s like that Shel Silverstein poem “Whatif.” You get that creeping, crawling sensation that you actually did not tell the story, not the way it needs to be told, that you did not accurately transcribe the voices in your head.

That what-have-I-done feeling is the equivalent of standing on the dock at the lake, knowing that you are not ready. It’s tempting to jump in and start writing as fast as you can, to just get into the water. And sometimes I do that. But that it is not how I want my life (story) to be — I would rather learn from my mistakes than repeat them. I always feel better when I write in my head before I get back to the page. And then comes the feeling that the story has taken over, and you’re really getting somewhere, because now the story has a voice. The story is talking to you.

That’s writing for me. I’m always trying to get back on that bus, to know exactly why that counselor could say *psyched* and I could not.

What is that line from *Almost Famous*? “The truth just sounds different.” Hell yes, Cameron Crowe. Yes, it does. I tell myself every day: Write until it sounds like the truth.

I think I write about scary things in part because of all my summers at different camps. Yes, I was just as horrified by my experiences at a couple of those smart-kid-geek camps where you didn’t have to go swimming. At the most cringe-inducing classroom camp, we did a production of *Cats*. For whom, I don’t know. I just know that I was in purple tights and a leotard with my face covered in makeup and whiskers. This was not a good look for me at that particular moment. It’s that sense of absolute horror, of a place or a person being designed to be your enemy, that excites me when I write. It’s why I love writing in the first person, because it’s about what this character *believes* and how that sense of conviction intersects with the norms of the indifferent world.

I know that Me + Childhood = No. I was not a child who got off on being a child. I lusted for adulthood. I didn’t like cartoons. I wanted to watch nighttime soaps. I pretended to smoke cigarettes (Bic pens), and my imaginary drink of choice was a Scotch on the rocks with a twist of vodka (apple juice). Now I do the same thing, in a way. I pretend. That I’m kidnapped, loved, and stalked; I imagine hearts breaking slowly on a daily basis. I think of every person having a secret history of unshared urges and thoughts, what they got away with, what they didn’t, how consequences form character, the ways in which we use “social” media to perform for that one person out there we want to see it.

I love writing. I still hate camp. And I was right about adulthood. It most certainly is better when no one is allowed to make you go swimming.

*Caroline Kepnes’s third novel*, Providence, *will be published by Lenny Books in June, and her first novel,* You, *has been adapted for a Lifetime series that premieres in September.*