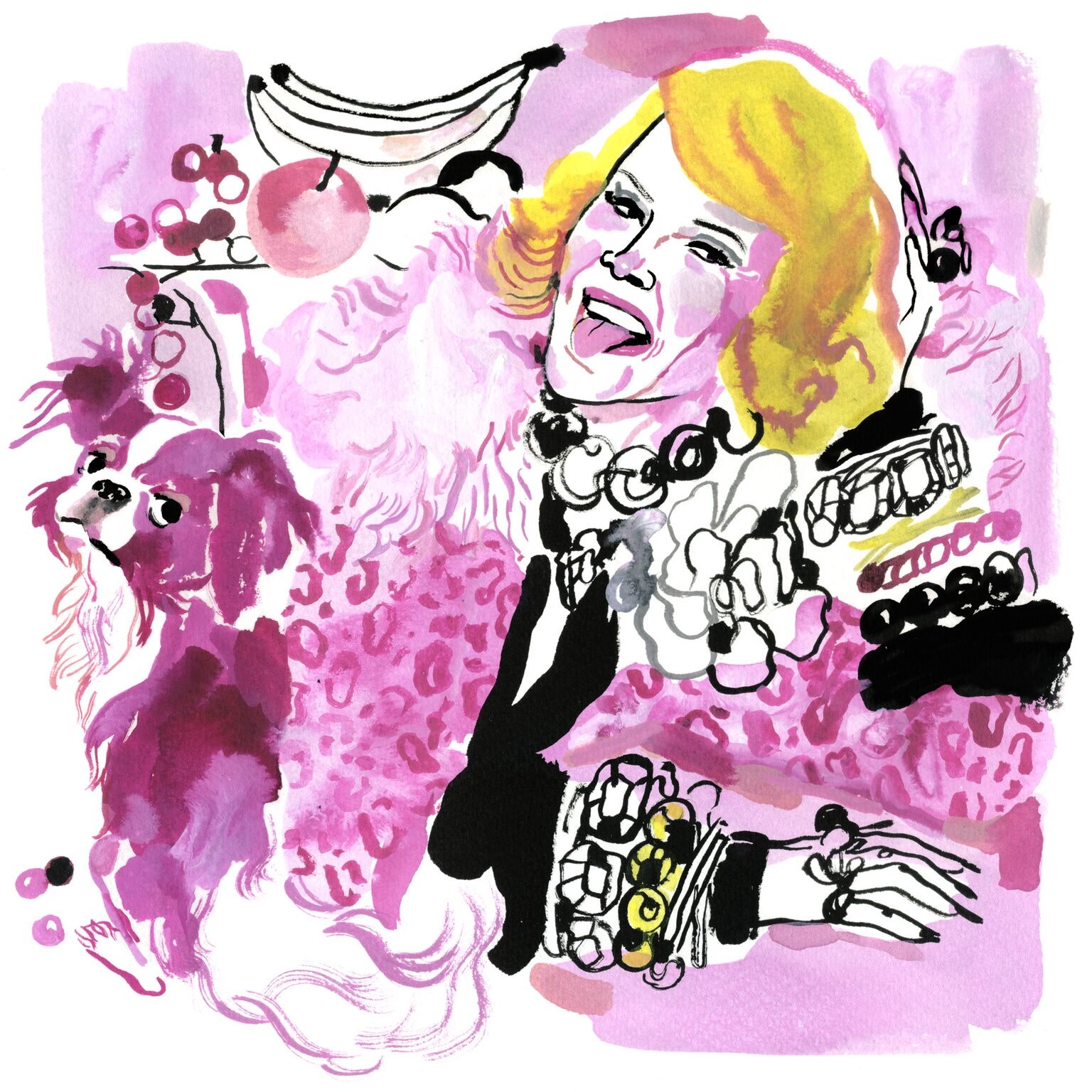 Even if you’re beautiful, it happens the minute some man decides you’re a little less beautiful. Of course he feels entitled to share his critique with the world. “Sadly, Heidi Klum is no longer a ten,” Donald Trump told the _New York Times_ when the supermodel was 42 and still a knockout by any standard, even in a bikini. President-elect Trump — then a paunchy 69-year-old — failed to acknowledge that he was never a ten on the best-looking day of his life, which passed half a century ago. We’re still waiting to see a picture of him in a bathing suit.

But if you’re a woman who’s getting older, some guy will be sure to make an issue of it, because God forbid the public should subject its tender gaze to such an affront. The first time Hillary Clinton ran for president, Rush Limbaugh suggested that Americans should elect Mitt Romney because it would be so unpleasant to watch Clinton’s face aging “on a daily basis” in the White House. Never mind the ravages of time on the faces of male presidents; wrinkles and gray hair bestow gravitas on men, only enhancing their authority. But from the moment she became First Lady until the devastating night she finally lost her chance to be elected president, Clinton’s outfits, hair, makeup, and figure were always open to criticism.

Of course, a woman who tries to forestall the effects of aging is also ridiculed, as Joan Rivers knew only too well. For decades before her death in 2014, Rivers was notorious for grotesque excesses of cosmetic surgery. In 2012, she claimed to have undergone 739 procedures — but no matter how many interventions she subjected herself to, it was never enough to satisfy her tortured self-image.

> In 2012, she claimed to have undergone 739 procedures — but no matter how many interventions she subjected herself to, it was never enough to satisfy her tortured self-image.

When Rivers came of age in the 1950s, women were explicitly taught to measure their worth in terms of their desirability to men. A woman’s destiny depended on the husband she married, and her market value was determined by her appearance.

But Joan wasn’t conventionally pretty, and she was furious that fate had cheated her of such a crucial asset. No matter how smart and talented a woman might be, what really mattered was beauty — and without it, she was sentenced to a lifetime of struggle. Outraged by the unfairness of society’s double standards, Rivers launched her career with satirical jokes skewering the sexist expectations of targets that included her own mother, who was allegedly so desperate to find Joan a husband that she put up a sign in their front yard advertising her daughter’s availability as the LAST GIRL BEFORE FREEWAY.

Over the next six decades, Rivers became America’s Queen of Comedy and achieved success in more than a dozen additional fields that ranged from theater, film, and television to business and fashion. But her humor reflected the stunning contradictions that characterized her entire life: as a comic, Rivers won her greatest fame by savaging other women with precisely the same kind of judgments that caused her such pain.

> Over the next six decades, Rivers became America’s Queen of Comedy and achieved success in more than a dozen additional fields that ranged from theater, film, and television to business and fashion.

Equating beauty with stupidity and promiscuity, she tormented celebrated actresses with slut-shaming jokes long before the term was even invented. “You show me a woman with a naturally beautiful body, and I’ll show you a tramp,” she said.

If a woman was good-looking, she had to be dumb. “You want to get Cindy Crawford confused? Ask her to spell ‘mom’ backward.”

Rivers was particularly jealous of Elizabeth Taylor, who was so beautiful she became a movie star as a child — so when Taylor gained weight in middle age, Rivers attacked her with a barrage of ridicule: “I took her to McDonald’s just to watch her eat and see the numbers change. I had to grease her hips to get her through the Golden Arches!”

For the rest of her life, Rivers never let up; her targets changed with the times, but her cruelty toward women who were overweight remained as relentless as her own fanatical determination to stay thin. Her friends described her as anorexic, and she routinely starved herself by living on Altoids — but she never forgave other women who refused to make such sacrifices. When Lena disrobed for sex scenes on _Girls,_ Rivers complained that HBO should be charged with “crimes against humanity” for showing womanly flesh that didn’t conform to Hollywood’s dictates on what constitutes an acceptable female body.

> For the rest of her life, Rivers never let up; her targets changed with the times, but her cruelty toward women who were overweight remained as relentless as her own fanatical determination to stay thin.

Gloria Steinem says she viewed Rivers as “a transitional woman” who grew up before modern feminism transformed American society. Rivers and Steinem were contemporaries, and both earned renown and defined historic legacies with their own success, rather than as helpmates to any husband. But unlike Steinem, who worked to introduce more enlightened ways of thinking, Rivers remained a prisoner as well as an enforcer of the values that tormented her youth — even as her courage and determination broke down barriers for other women, paving the way for the enormous success of today’s younger female comics.

It’s tempting to think we’ve outgrown the toxic values that blighted women’s lives in previous generations — and yet the insulting commodification of women became a hallmark of the 2016 presidential campaign as Donald Trump fat-shamed a former Miss Universe and mocked the appearance of Carly Fiorina, the only woman in the GOP primaries, as well as his rival in the general election, the first female major-party nominee in American history.

From politics to show business, we still live in a culture where the coverage of famous women revolves around public critiques of their appearance and their ability to attract and satisfy men. Jennifer Aniston earned $31 million in 2014 alone and has been a megastar for two decades. And yet she is judged relentlessly on how she looks, with a particularly deranged focus on whether she is pregnant and therefore fulfilling her biological destiny as a woman.

After enduring years of such commentary, Aniston finally issued a scathing reply to the “warped standard of beauty” purveyed by so many media outlets. “For the record, I am _not_ pregnant,” Aniston (1). “I’m fed up with the sport-like scrutiny and body shaming that occurs daily under the guise of ‘journalism,’ the ‘First Amendment’ and ‘celebrity news’ … I resent being made to feel ‘less than’ because my body is changing and/or I had a burger for lunch and was photographed from a weird angle and therefore deemed one of two things: ‘pregnant’ or ‘fat.'”

Aniston’s takeaway was uplifting: “We get to decide for ourselves what is beautiful when it comes to our bodies,” she said.

Aniston isn’t the only one who’s fed up; with celebrities like Jennifer Lawrence and (2) pushing back against Hollywood’s insane standards of youth and female beauty, things may be starting to change. In her first post-election appearance, even Hillary Clinton spoke, at a Children’s Defense Fund event, with a face that was defiantly naked — although she didn’t risk such a thing until after she’d lost her shot at the White House.

But it’s also worth taking a longer view of these values and their significance over time. When Rivers’s life was celebrated posthumously, the recognition only highlighted the irony of her lifelong obsession with superficial appearances. For many years, Elizabeth Taylor was known as the most beautiful woman in the world — but her career was virtually over by the time she hit middle age, and today she is remembered chiefly for her looks, and for having married eight times.

> When Rivers’s life was celebrated posthumously, the recognition only highlighted the irony of her lifelong obsession with superficial appearances.

Rivers’s life was a wild roller-coaster ride that alternated between spectacular triumphs and crushing failures. When she married in her 30s, the husband she had yearned for ruined her career and squandered her fortune before killing himself and leaving her with $37 million in debt. But in her later years, Rivers managed to reinvent her career, restore her wealth, build a billion-dollar company, and make history as a fearless pioneer who helped to create unprecedented opportunities for women throughout the entertainment industry. When she died at 81, she was at the height of her success — and the worldwide tributes made it clear that she had won the love of millions.

Maybe it’s time for all of us to reconsider the importance of beauty in defining a woman’s destiny. If Joan Rivers were able to look back now and reevaluate her life and legacy, she’d still be aggrieved that Elizabeth Taylor was prettier.

But even Rivers would have to admit that the ugly duckling was the one who helped to change the world.

_Leslie Bennetts is the author of_ (3), _published by Little, Brown on November 15. A longtime_ Vanity Fair _writer and former_ New York Times _reporter, Bennetts also wrote_ (4), _a national best seller about the lifelong cost of economic dependency for women who leave the workforce to become stay-at-home mothers._