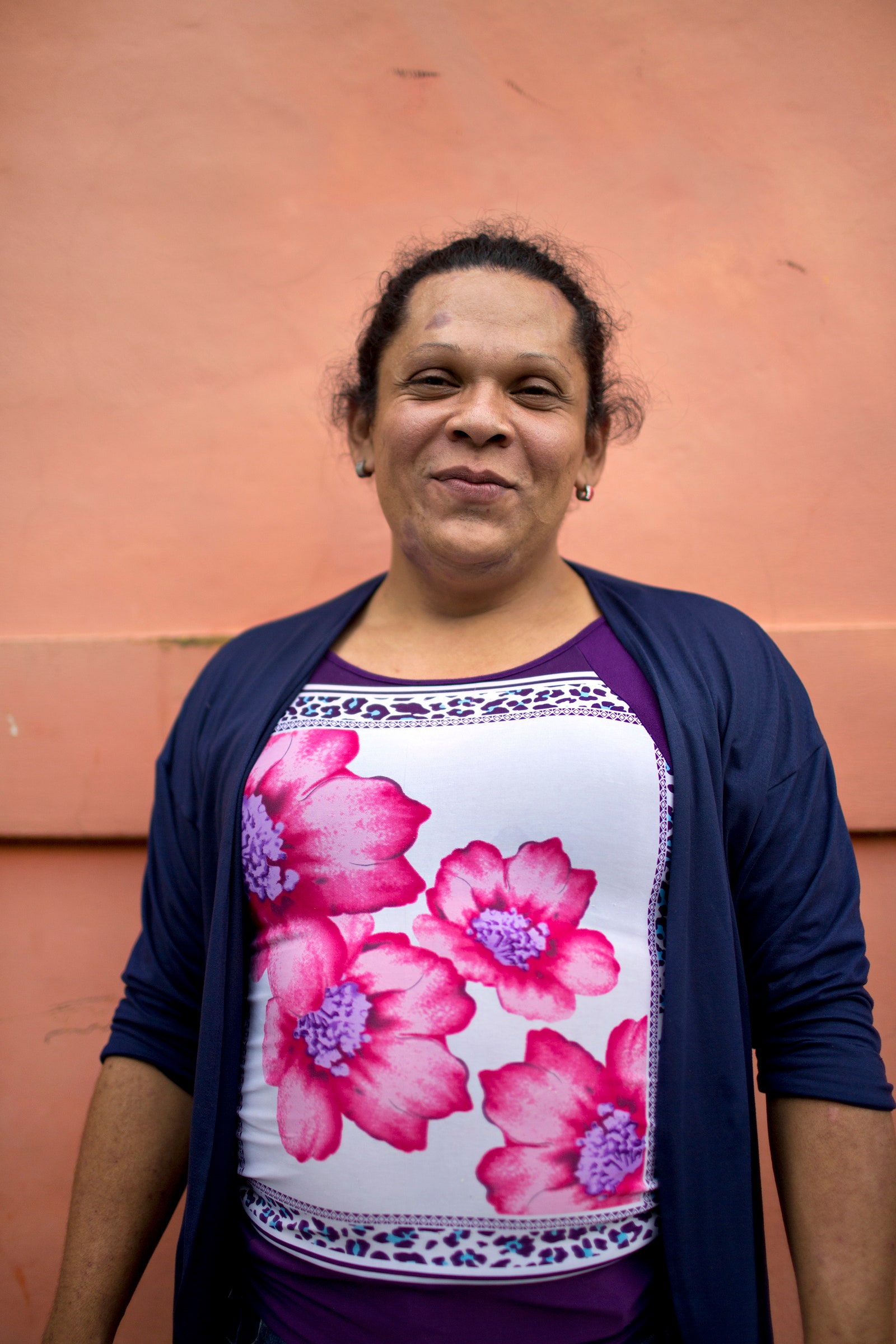 Her body reads violence, a pale script of wide, jagged scars that run across her stomach, chest, and back, punctuated only by the circular scars left by bullet wounds. Living openly as an HIV-positive trans woman, (9), 39, has survived (6) and five years in a (5). Her mere existence challenges societal norms in her conservative birth country of El Salvador. That’s why she founded the NGO (7) in San Salvador in 2008.

Avelar, who was born in Chalatenango, in northwest El Salvador, is tall with unruly hair. She is soft-spoken and has a wide, easy smile, but her presence is commanding. Through pure willpower and self-education, Avelar, who never finished elementary school, has learned how to navigate the world of human rights on her own.

Avelar and her staff of seven, which includes trans women and men, as well as several volunteers, provide support to the LGBTI community, defending and protecting their rights when no one else will. According to Avelar, trans women migrate from El Salvador to the United States in great numbers because they have no guarantee of basic human rights in their home country, including access to education and health care.

Although the United States offers more opportunities for the trans population, Avelar has become increasingly worried about (1). “The US is taking drastic actions, and they are resulting in a worsening human-rights situation,” she says. “It not only affects one country — it affects the whole world, because other countries could copy his actions.”

I spent three weeks with Avelar in San Salvador last August getting to know her work and the trans women whom she helps. Avelar introduces me to Nicole Rosales, 22, a trans woman and sex worker who has a cascade of waist-length curly brown hair with golden highlights. Rosales dreamed of an education, but because of discrimination, she never had that opportunity. “At fifteen, I decided to become a transgender woman. There are no options for work aside from being a prostitute,” she explains. “I have been beaten, raped, assaulted. It’s not easy. Clients tell you, ‘You are worth $5!’ They say that trans people have HIV — that we are worthless. But there are many trans people who have shown society what we are worth.” When I ask Rosales what her aspirations would be if she could do anything, she says, “Ever since I was little, I wanted to be a lawyer.” Seeking better opportunities, Rosales had attempted to migrate to the United States earlier in the year, but before reaching Mexico, she turned back, in fear of being kidnapped and forced into prostitution by a gang.

Marfil Estrella Pérez Mendoza, 25, a trans woman and sex worker, came to Comcavis Trans to get help preparing the necessary documents to request asylum in the United States. She had survived an assassination attempt by a man with an ice pick who had attacked her late one night while she was walking home from work. Trans women in El Salvador are particularly vulnerable to violence and have been targeted by both death squads and gangs (2). Marfil Estrella, whose name translates to Ivory Star, felt like she had to leave the country in order to stay alive. Describing her experience as a trans woman, she says, “It is an odyssey. People see a transgender person, and they start looking at you like an alien — especially if you don’t look like a woman and you have more masculine features.”

Pérez Mendoza fled El Salvador in August. I accompanied her via bus from San Salvador to Tapachula, Mexico, and witnessed firsthand the level of unwanted attention that Pérez Mendoza experienced on her journey. She continued to do sex work as she traveled through Guatemala and Mexico to pay for her transportation to Tijuana. In November, she crossed the border from Tijuana into the United States and requested asylum. She was immediately sent to a detention center for men, a US detention policy that often creates violence for trans women. If her request is granted, she hopes to enroll in high school.

Avelar and I also met with Alejandra Jiménez, 31, a trans woman with the lithe body and graceful movements of a ballet dancer. She had migrated from El Salvador to Italy when she was nineteen. Jiménez returned to El Salvador this past summer to challenge the law that (3). “I left the country when I was nineteen years old because I understood that in this country, I would not have the security and tranquility to be able to express my identity in the deepest sense,” she tells me. “A person close to me had been murdered because she was a transvestite. I was very afraid, and with the support of my family, I emigrated.” For Jiménez and other trans women, the discrepancy between their appearance and the names on their official documents often results in employment discrimination and harassment. “Not being able to change names limits trans people,” explains Avelar. “Unfortunately, in El Salvador, women and men are defined by their genitals.”

Gabriel Escobar, 21, a trans man who volunteers at Comcavis Trans, is aware of the difference between his trans experience and that of trans women. Escobar has a slight frame and a calm manner and recognizes that, physically, he can pass as a man. He says that he has experienced no violence and little discrimination and laments, “I wish life were easier for trans women. People congratulate trans men when they transition, but they kill trans women.”

Avelar, who mentors Escobar and her younger colleagues, continues to receive death threats and recently had to move homes for her safety. She is aware that one day she might have to flee El Salvador, just as so many trans women before her have done. “This is a country that requires committed people,” she argues, “people that will fight to achieve equality. If we don’t achieve that, at least we are making the effort so that future generations can live in a just country.”

* (8) is a freelance journalist based in Mexico City, and she is currently covering migration in Central America for (4).*