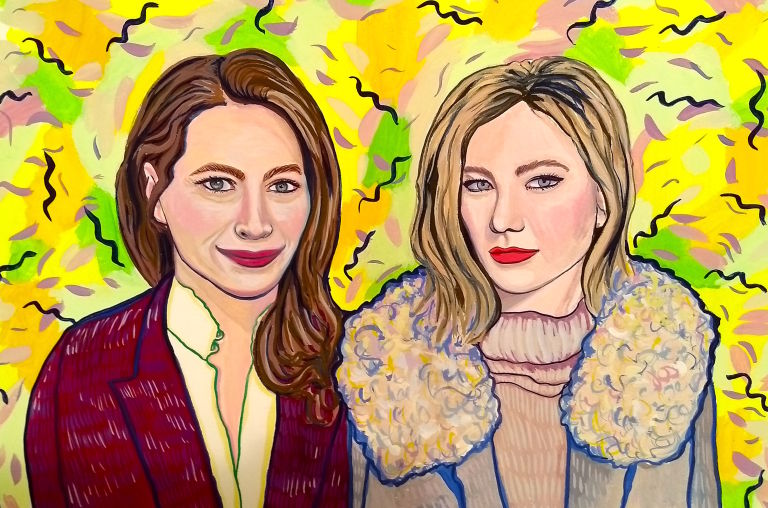 I’m not exactly the first person they ask to interview supermodels. I’m not privy to the insider news of the fashion world, and I’m also 5’4″ — so a lot of my questions would just be “What’s it like up there?” But when I was tasked with interviewing two extraordinary women, Karlie Kloss and Christy Turlington, it didn’t end up feeling like a task at all. All the classic model stereotypes (cool, unattainable, aloof) were cracked in half as I got to know women whose powerful interests stretch well beyond the catwalk.

I was not only impressed by their individual pursuits — Christy’s commitment to (1), an organization trying to make childbirth safe for every woman around the world, and Karlie’s involvement with (2), a coding camp for girls — but I was also deeply moved by the mentorship Christy has offered Karlie in a business where sisterhood isn’t always the norm. It reminded me of the connection between Lena and me that launched this newsletter, and it also reinforced the idea that lending a hand and a shoulder to cry on will always pay dividends.

__Christy Turlington:__ I met her the first time at a store in New York City. She was a girl at the time, but I really was drawn to her immediately because I also started working as a young woman. I really don’t work very much and haven’t for a long time, but I was there to do a portrait, and Karlie came in. I think she was shooting a campaign at the time. I was like, What a lovely girl. Very tall, very pretty, but I really didn’t follow and don’t follow fashion magazines as a layperson anymore. But after that, I started to see her on virtually everything and everywhere.

__Karlie Kloss:__ The first time we met, I was sixteen, and I burst into tears. I admired Christy as an icon in fashion, but beyond that, I really admired the fact that she broke the rules and continued to pursue her passions beyond her day job . I think that she is an extraordinary woman in every sense of the word and in every facet of her life.

__CT:__ Eventually, she knocked on the door in my office. She was in the same building for a meeting and came over and said, “Hey, is this Every Mother Counts?” I was in the office sitting at the computer, and I turned around, and she was like, “Hi, it’s Karlie.”

From that moment on, we’ve gotten to know each other well. We have made time for one another to talk, to share, to connect, and to partner in different ways. She came to Haiti with me on an Every Mother Counts trip a couple of years ago. She’s there at any time that I need her to be supportive, and I try to be there as solidly as she is for me in any of her endeavors.

__KK:__ For someone like me who loves to learn and wanted to continue my education after I graduated high school and balance that with my career, Christy was a trailblazer. She was instrumental in giving me the courage to apply to NYU — she actually wrote my recommendation letter.

__JK:__ Both of you have taken unconventional paths for having started in modeling. What made you want to pivot to a new path?

__KK:__ Part of why I admire Christy so much and really learned from her as a mentor is because after graduating high school and before applying to NYU, and before starting Kode with Klossy, in a middle-of-the-road point in my career.

I was really fulfilled in a lot of ways, professionally very accomplished. But at the same time, I was not feeling fulfilled and challenged in the ways that I knew I was capable of. I had to reevaluate how I was spending my time, the kind of people I was working with. I had to make choices and say no and really be guided by living my life and choosing jobs that I wanted to do based on who I am and what I care about.

__CT:__ I really didn’t plan on the career that I had at all. I was thirteen or fourteen years old when I started modeling, and for me the opportunity to travel, and see the world, and have some independence, that was the carrot at the end of the stick. At every stage, I just tried to take as much out of the opportunities that I was given as I possibly could. That led me to live in New York right out of high school. It led me to have some great fashion career opportunities, but then those opportunities really allowed me to take some time and figure out who and what I wanted to be, which always involved going back to school. At 25, I decided to apply to NYU, and started there the next fall.

After I became a mom, I went back to school a second time to get a master’s in public health at Columbia in my late 30s. Because of a childbirth-related complication with my first child, my life path went deeply into global maternal health. That led me to go back to school, but also to start production on my first documentary film, *No Woman, No Cry.*

When I finished the film in 2010, that was when Every Mother Counts was formalized, first as a campaign but then a couple of years later as a grant-giving organization. We’re now a 501(c)(3), and we’ve given about $4 million of grant funds to programs around the world that make sure that women have better access to quality and appropriate care throughout their pregnancies and deliveries and postpartum period.

__JK:__ Is there a specific moment or setback that you ultimately grew from? How were you able to use your experiences to rethink success?

__CT:__ I feel like I’m pretty good at listening to my gut and was by the time I started my charity. But I had never made a film before, for example. To put myself in a space where I didn’t have a lot of experience, but I had passion and I had resources and I felt as I was pursuing that endeavor that I was in the right place to get the information that I needed — I think to take that risk was a big learning experience for me and allowed me to have more trust.

__JK:__ Taking on the role of being a mentor and an advocate and starting a nonprofit is an extraordinary act. I would love if you could tell me about some of the other extraordinary women or girls that both of you have met while working with your charities.

__CT:__ We do work in eight countries around the world, and many of those programs are led by women: women who are midwives, or obstetricians, or community health workers who aren’t compensated for the kind of work or the quality of work that they do. They do what they do because they care, and because what they offer women and their communities is so essential. On any given day, I just have to conjure up a face of one of those partners and I’m inspired and motivated to do whatever I have to do in the moment.

__KK:__ That feeling of fulfillment and of passion and excitement around doing something extraordinary and helping others — there is no action too small. I’m so excited to see what all of the girls in our Kode with Klossy camps go on to do, because they’re the future.

__JK:__ How has your sisterhood with each other inspired you?

__CT:__ I was so impressed with Karlie even when she started Karlie’s Kookies early on. She has these endless talents, and she’s been seeking out ways to do good from the get-go. I think she thought coming into her career, *Look at all the possibilities of what I can do.* That came to her much sooner than it did to me.

She figured out in such a short period of time that she has access to smart and inspiring people — people that she trusts, and that she has learned from — and figured out a way to turn that into a nonprofit. She reaches so many young people and gets them inspired.

*Jenni modeled once, for a collection of high-fashion leggings.*