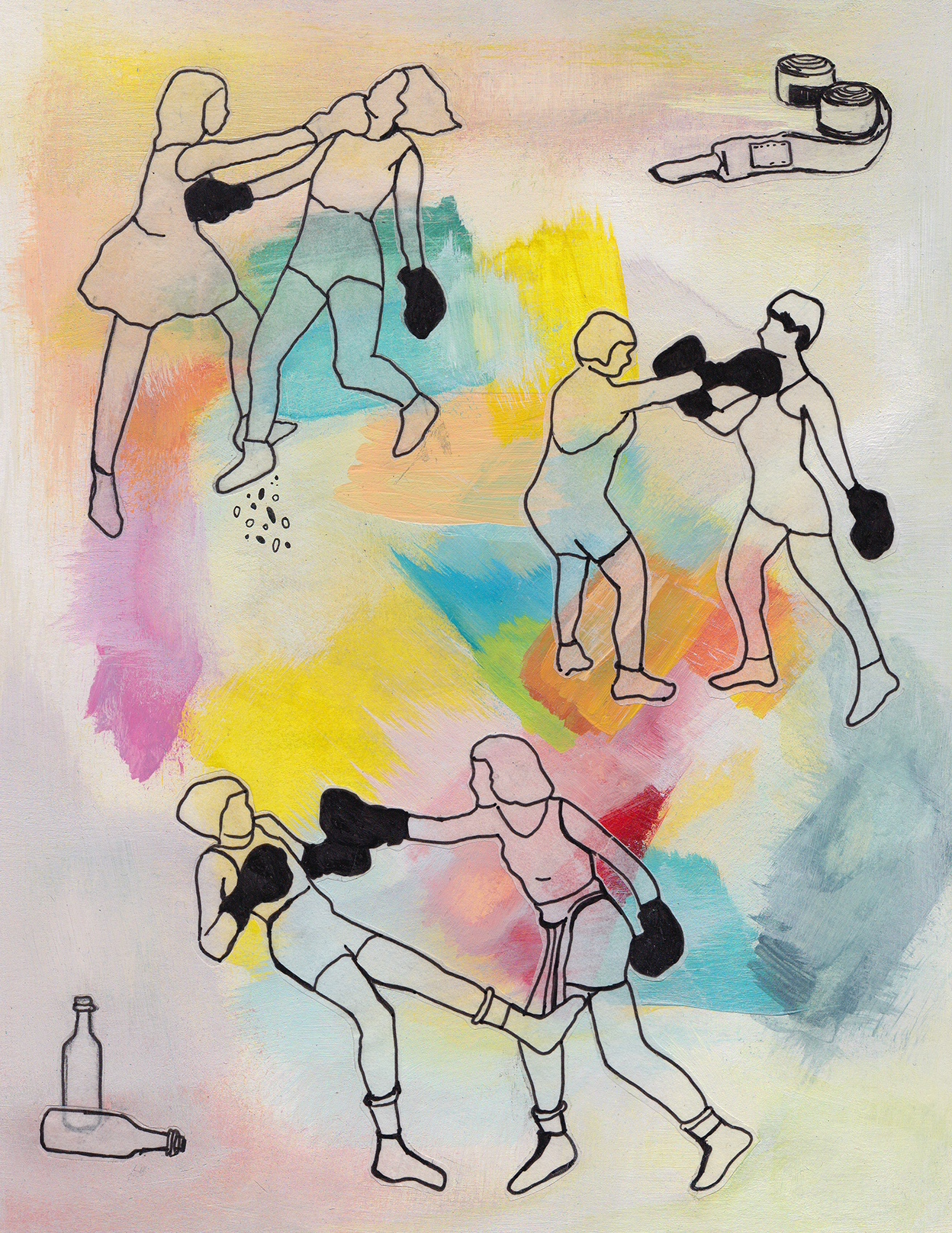 My therapist said I should do something physical to deal with my traumas and my ruminating. “Exercise is the best drug. It’s better than alcohol,” she said. I used to use both — drugs, alcohol — to disappear my fears and sadness. Intoxicated, I’d stop caring or I’d be so out of it, I’d simply not remember. But the haze of oblivion would lift after a while, and then I’d have to deal with everything all over again: the sadness, the feelings. Plus, there was also my body, unhappy and in physical pain from the wrong kind of overindulgence.

“It’s active, meditative, and you can really get a break from your thoughts.”

So I tried yoga.

It was too relaxing; it was like trying to get bubble gum off the bottom of my socked feet, and no, it wasn’t the kind of transformative experience that all my yoga-loving friends said it would be. Up and down and twist and turn and down, the gum keeping me stuck … the lulling voice, the gentle encouragements that made me think of a soft guy giving you unwanted hugs as you pass his cubicle.

After the punishing warm-up, I wrap my hands in a soft, long strip of cloth, in complicated crisscrossing twists. The wraps protect my hands and wrists from the impact of the punch, and they go round and round my fingers and my thumb, keeping them all tight, together, in place. ​

The first time after I wrapped my hands, I immediately heard “Mama Said Knock You Out,” by LL Cool J, in my head. I used to play that song whenever I’d get a rejection for a novel I’d submitted. I am also the kind of a person who has the word “perseverance” tattooed on her body. My life has been about getting knocked out and getting up, which is why corny inspirational tattoos and songs happen.

> I am also the kind of a person who has the word “perseverance” tattooed on her body. My life has been about getting knocked out and getting up, which is why corny inspirational tattoos and songs happen. ​

Unfortunately, for the past few months, it’s been hard to get back up. There’s an extraordinary cluster of fucks I have to give that keep me down: divorce, finding a lump in my breast, possibly losing my home, missed deadlines, unemployment, my sweet grandmother dying …

There’s nothing I can do about all those external circumstances. But there are things I can do to distract myself. Besides yoga, in the past, I’ve tried running and swimming, and both were too monotonous to shut up the talky brain. Too smooth, too smoothly going. I tried napping, too; I broke records sleeping through my days: two, three naps a day, like a baby. But similar to drinking, that was just putting a veil over the pile of shit I still had to learn how to manage. I knew I needed something where my entire body and mind would be occupied, where I would be so out of breath that I had to think of only breathing and nothing else. I needed something that would help me get some of my sadness and aggression out but in a way that’s not self-destructive. Which is why I signed up for boxing: it aligned better with my fighter personality.

Once I have the wraps on, I shadowbox, meaning I punch air. I shadowbox in front of the mirror and I look at myself: tall, too-slim-thanks-to-stress. I’m more of a ballerina than a boxer. My hair is in braids as if I were in a dance recital.

But I am in a dance recital! Sort of. I had no idea boxing was about complicated dancing. As you move and punch, your right leg does a twist with your front toe and the back heel raised; your feet are spread diagonally with an imaginary line in the middle. I have to focus to keep those feet on the ground. My natural instinct is to jump, but jumping wastes energy. I bend my knees, my elbows against my sides, my fists up and guarding my face. My chin is down, eyes fixed on my eyes looking back in the mirror. My attention is on a complicated sequence of movements that end, over and over, in a fist catapulted toward my mirror face. ​

Not that I’d want to fight me, but, yeah, sometimes I want to fight me. I get annoyed with my brain chattering and telling me how bad things are. For example, in my mind, as I train, I picture my house and almost everything brings up some memory — good or bad, it doesn’t matter; it hurts. The brain says I’m unloved, there’s no way out; it says I need to do something about it all, so why am I just stuck here, feeling sorry for myself — do something! But what? The brain doesn’t say; it just says, “This sucks, this sucks, this sucks.”

“This sucks” is useless information; it’s no information. I don’t need to hear it. And when I get into the rhythm of dance-and-punch, and once my focus intensifies, the chattering fades; “this sucks” is gone.

> “This sucks” is useless information; it’s no information. I don’t need to hear it. And when I get into the rhythm of dance-and-punch, and once my focus intensifies, the chattering fades; “this sucks” is gone. ​

In the beginning of boxing, I had a few moments when I did not pay attention to my body and the workout and I had to bend down, pretending to stretch to hide that I was crying, but now that happens less and less. And even if I lose my focus for a moment and get lost in some unhappy thought, I have enough body-and-mind discipline to knock that thought out.

After the shadowboxing, the trainer says to put on gloves. I don’t own the gloves I use. All the gym gloves stink terribly of old sweat. When I get home, I have to soak the hand wraps in scented pomegranate body wash. I haven’t bought my own gloves yet, and I won’t for a while. The gym is gritty; it is owned by a bunch of dudes, and it’s not like I want to be one of the dudes, but I also don’t want to look like a precious princess who refuses to use the stinky loaners and has to have her own little gloves.

Eventually, there will only be the smell of sweat, and my pigtails get wet from it, and everything feels good and sore, and my head becomes empty and quiet. After the nonstop punching, the stinky gloves will feel like anvils, weighing me down but also grounding me.

Once we have the gloves on, each one of us stands in front of a black punching bag, and we’re given instructions on the sequence of movements. Even more than with shadowboxing, I have to concentrate on my dancing and on body parts working in unison: arms with knees, pivoting feet, fists guarding my face, then punching: left, right, jab, jab, right, duck, jab, jab. My body is my mind.

Soon, I will cross the line where I will feel like fainting, and this will be the point after which I’ll have to keep going because I cannot stop — if I stop, I might get flooded with traumatic memories. If I stop, I might remember all the things: that I am going to be broke soon and that I might not have a place to live soon. Maybe even some old grievances will materialize as well: I’ll remember the time when I couldn’t go to school for three days because of a black eye, courtesy of a family member … or — or I’ll remember the most recent trauma: my grandmother dying thousands of miles away. When I was a child, she used to take my hands in her hands and kiss them, calling them her “cute little paws.”

They are boxing paws now, Gran. ​

*Jowita Bydlowska is the author of* Drunk Mom, *a memoir about addiction. Her next book,* GUY, *a novel, comes out in fall 2016. She lives in Toronto, Canada.*