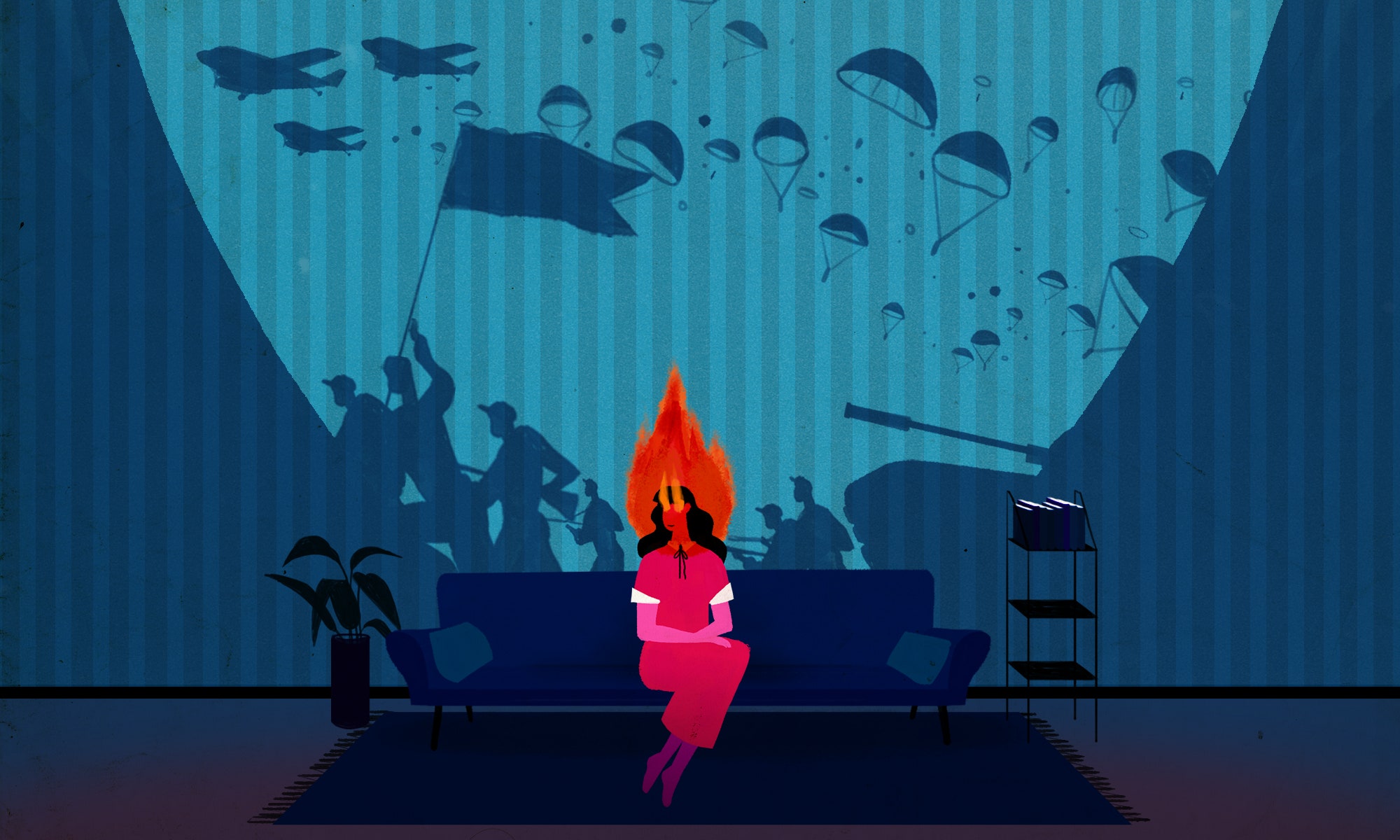 Koreans have a culturally specific, ultra-distilled form of rage so potent that some believe one can literally die from it. The Korean word for this rage is *han*, which is basically the racial memory of thousands of years of being invaded and put-upon.

The disease caused by *han* is called “*hwa-byung*,” which translates to “anger illness.” It is an actual, fatal, medically recognized condition. It’s even in the * (1)*, which refers to it as a “culturally specific disease.” Colloquially, I’ve heard *han* called “kimchi temper.”

I fully admit to playing the *han* card, i.e., flying off the handle at people and later saying, “Sorry; I’m Korean,” at which point most is forgiven, even if the forgiving party doesn’t quite understand why.

Within the Pacific Rim, the wrathful Korean is something of a regional stereotype: Koreans are said to drink a lot, to love crying, and to have fits of white-hot, blinding rage that channel the ancestral anger of 5,000 years of being pillaged and colonized.

An Australian veteran of the Vietnam War, for example, once felt it necessary to tell me that Aussie troops knew the Korean troops would be the most bloodthirsty. The Americans seemed to agree: A (2) on South Korean participation in Vietnam stated that the Koreans “usually surrounded an area by stealth and quick movement … The enemy feared the Koreans both for their tactical innovations and for the soldiers’ tenacity.”

*Han* is most likely what James Bond creator Ian Fleming had in mind when he wrote in his 007 novel *Goldfinger* that Koreans “are the cruelest, most ruthless people in the world,” adding that they have no respect for human life. In this scene, the supervillain of the title is explaining to James Bond why he picked only Koreans as bodyguards, among them the stocky, grunting, subhuman karate expert Oddjob, who decapitates people by hurling his razor-sharp black bowler hat at them.

Fleming’s description of Koreans is widely regarded as racist, but my desire to be offended is contradicted by a sheepish *How did he know?* sort of feeling.

The world has also become familiar with the Self-Destructively Vengeful Korean stereotype, thanks to films like Park Chan-wook’s 2003 masterpiece, the ultraviolent *Oldboy* — which depicts a man cutting off his own tongue with a letter-opener and another tricking a childhood nemesis into having sex with his own daughter, among other such gruesome things.

Are Koreans more wrathful than other people? It’s hard to be sure. I can speak only to my experience: Korea is the only nation where I’ve regularly witnessed grown-ass men getting out of their cars to fistfight over road rage. (My dad’s explanation for this phenomenon: “Koreans don’t have guns, so they do not hesitate to confront each other physically.”)

It’s the only nation whose citizens send me emails threatening to show my articles to my parents — more on that later.

(3)* — as “inaccurate and treacherous.” When I appear on TV, all I get from my mom is “That lipstick is very … red.” There’s nothing you can tell them that they haven’t thought of already, and they’re better at this than you are.)

Korea is also the only country in the world whose representative airline is run by a family dynasty that is better known by the term *nut rage* than by their business achievements or even their actual name.

The moniker originated during a notorious December 2014 incident in which Heather Cho, the daughter of the Korean Air Chairman and CEO, had a Caligula-esque meltdown on a Seoul-bound flight departing from New York’s JFK airport. The triggering event was that her macadamia nuts were served in a bag rather than a bowl. Cho assaulted the head flight attendant and forced the pilot to return the plane to the gate so the cabin staffer could be removed from the plane. Cho spent three months in jail on the charge of endangering a flight.

In April 2018, Heather’s sister Emily allegedly threw a glass of water at someone’s face during a meeting, giving rise to the term *water rage*.

Violence aside, there is a particular brand of Korean butt-hurt that I have never seen elsewhere. More personally, I’ve been the brunt of Korean *han* as a writer. The topics I write about usually involve France, the United States, Korea, or Judaism. But among those groups, I only ever get hate mail from Koreans. And lots of it.

In 2014, after I published a piece in the *Times* of London about Koreans’ reaction to a national tragedy, a bunch of Koreans fired nastygrams at me. One such wounded party, whom I’ll call by her initials, KKK (really!), wrote me a threatening email via my author website: “I am so shamed that you are identifying yourself as a ‘Korean’-American. I am going to share your articles with your parents as well as all my fellow Koreans.”

KKK also complained to my UK publicist and agent. “I’ve just heard from your new friend \,” my publicist chuckled to me on the phone.

KKK wrote to the *Times* of London’s editor and to the foreign-news desk as well. The reason I know this is that KKK cc’d me on the email. Here’s an excerpt:

> “If you want to know more about what’s been falsely written, I would be very happy to comment by referring each line … please share the apology announcement … I am ready to hear any feedback from you, my dear the Times.”

I’m sure the *Times* got straight on it.

The irony is that Koreans were mad at me for describing Korea as a very emotional nation. To which they responded by being even more emotional.

What makes me even more upset about this sort of hair-trigger fit is that I feel, irrationally, that Koreans shouldn’t act like that. And I’m aware of the contradiction here: I get mad at how mad Koreans get and we all get mad at each other in a *han* clusterfuck. A *hansterfuck*.

But surely nurture has to triumph over nature at some point. Anyone born and educated in the United States, regardless of how irascible their parents are, is taught by teachers and peers to work out bad feelings through cardio and yoga, to express difficult emotions with “I” statements instead of being combative. Would this not keep *han* at bay? In many cases, it does not, I’m afraid.

The reasons for *han*’s persistence are several. For one thing, most Korean-Americans are only a parent or grandparent away from the devastating Korean War (1950–53). Some wartime atrocities like the Holocaust are studied and discussed broadly; this is not true of Korean War–induced trauma. There is no Korean Claude Lanzmann. There is no Korean Elie Wiesel or Alexander Solzhenitsyn. Korean culture does not traditionally encourage therapy. And these unprocessed feelings do get passed on to the children. How could they not?

*Han* is not at all compatible with American life. It is also not compatible with Christianity, a religion espoused by a great many Koreans at home and abroad. The dissonance between Korean anger and the Western, Christian-influenced belief in forgiveness induces a tremendous internal conflict among Korean-Americans. To be Korean-American is to experience the excruciating pain of one’s innate nature turning against one’s environment.

Why, in modern life, are we discouraged from expressing anger? Why are we told that the solution to negative feelings is to “breathe into it” or to “observe your own anger”? I’m not saying that a better solution is to give everyone in the room a different weapon with which to torture one bad guy (the plot of another popular Korean film). But telling people how to manage their feelings is dismissive. It’s lacking in empathy. It’s smug. And it denies the important role that anger plays in survival.

After a tragedy, grief is crippling. Sometimes, the only thing tossing you a lifeboat is your own rage. Isaac Bashevis Singer’s wonderful 1966 novel *Enemies, a Love Story* depicts an all-too-human scene in which a Holocaust survivor, Herman Broder, is about to kill himself but refrains from doing so because he’s outraged with his lover for cheating on him. In other words, he starts out the day being too aggrieved to live … and ends it being too angry to die.

Anger saves lives. Really. It’s worth considering that *han* is a more normal — and necessary — human instinct than anyone would like to admit.

*Euny Hong is a journalist and author, most recently of* The Birth of Korean Cool: How One Nation Is Conquering the World Through Pop Culture *(Picador 2014).* *Her work has appeared in the* New York Times, *the* Wall Street Journal, *the* Financial Times, *the* Times of London, *and elsewhere. She would like you to follow her on Twitter: (4).*

1) (https://dsm.psychiatryonline.org/doi/book/10.1176/appi.books.9780890425596)
2) (https://books.google.com/books?id=on9vCwAAQBAJ&pg=PT147&lpg=PT147&dq=The+enemy+feared+the+Koreans+both+for+their+tactical+innovations+and+for+the+soldiers%27+tenacity&source=bl&ots=T6xLrM9Hmh&sig=08z8ux9RVrEGvk6zTDk9HQXF3cM&hl=en&sa=X&ved=0ahUKEwj7u9Szx93bAhWCm1kKHaD3DfQQ6AEIJzAA#v=onepage&q=The%20enemy%20feared%20the%20Koreans%20both%20for%20their%20tactical%20innovations%20and%20for%20the%20soldiers’%20tenacity&f=false)
3) (To all the would-be trolls out there threatening to snitch on me: My parents are already painfully aware of my disreputable scribbles. My dad described my first book — a novel called *(https://www.amazon.com/Kept-Manners-Y-Euny-Hong/dp/0743286847)
4) (https://twitter.com/@euny)