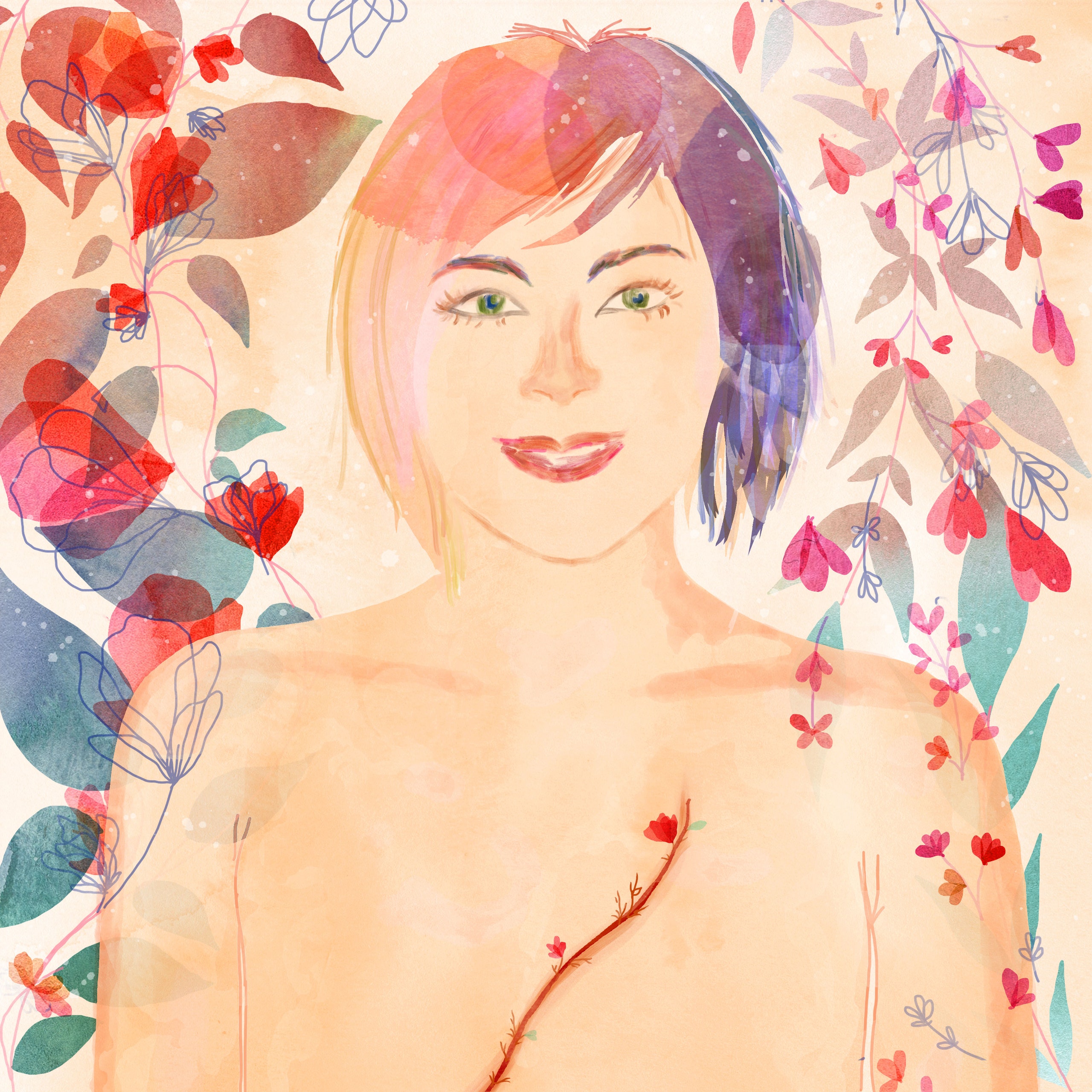 I have been grappling with the question of what makes a woman since being diagnosed with breast cancer two years ago, at age 30. I was born biologically female and my body progressed in that way for decades, never veering from the textbook. Puberty, estrogen, breasts, a period, you name it, if it was a trait of a “woman,” I had it. Then, suddenly, a rogue cell. Next, an incessant reproduction of that cell, the forming of a tight-knit unit of these cells, a mobilization of assets, and then the motion of those cells through an otherwise healthy body.

Cancer is almost militarily systematic. It moves with stealth purpose, in trenches of tissues and ducts. And, like any effective attack, its terror reigns far beyond the starting point. It had a goal: attack and destroy “woman” wherever you find it.

Though the cancer was in my breast, the first bomb of destruction was my uterus. I was single when I was diagnosed, so my uterus became the subject of much debate. I was about to begin chemotherapy, which could effectively destroy any hope of reproduction. Do you want children? Maybe? You must start fertility treatments this week. Got anyone to father it? No? Here’s a pamphlet of sperm donors. Oh and, by the way, it’s possible that because you couldn’t establish your career, find the perfect man, and procreate in the time allowed for “woman,” you just left yourself wide open to cancer. You see, there are some studies that support the idea that the childless are at a higher risk for breast cancer. Add that to a historic trait of womanhood: shame.

At the same time of my diagnosis, my career as an actor had taken a pivot, and I was directing a musical at my alma mater. I was surrounded by bright, young children: the physical manifestations of other people’s ability to reproduce. As for me, I was sneaking into a high-school janitor’s closet on rehearsal breaks to give myself two shots a day to stimulate my ovaries. I had superhero friends who were offering sperm, and all the while, wondering if I gave myself cancer by choosing other priorities. Ultimately, I decided to freeze my eggs unfertilized, giving me four sweet bastard children on ice. I decided that no matter how badly cancer wanted to ruin this for me, I will choose to have children if and when I’m ready, and I will choose who their father is. No cancer or doctor or legislation will decide that for me.

The next detonation took a different approach. My estrogen. The cancer was eating up my lady juice at a rate too fast to process, which is why I have an eight-centimeter ball of hell in my boob. So we must cut it off at the source. I had to get rid of my estrogen. Starve out the enemy! At 12 p.m. on the day I began my hormone depletion, I was given an injection of Lupron, an ovarian suppressant. It was the heaviest day of my menstrual cycle.

By 6 p.m. that evening, not even a drop of blood could be found. My internal factory that had been chugging along at a clip for the majority of my 30 years suddenly sputtered to a stop, like a cartoon train, wheezing and spewing smoke until it slumped in defeat. It felt like silence. Stillness. The end of productivity and promise.

> This was menopause. A rite of passage I was decades too young to experience.

This was menopause. A rite of passage I was decades too young to experience. Like a real-life *Freaky Friday*, this body didn’t belong to me. The pounds start packing on in preparation for, I don’t know, being sent adrift on an ice floe as you mournfully wave ashore at the men, busily sniffing new pheromones. The hot flashes have you ripping off clothing in public. You have the opposite of lady glow. You’re a walking ghost town. You don’t emit sex, and you certainly don’t want to have it. Before menopause, I loved the sensuality that came with “Woman,” and now I may as well have a slab of marble down there. My evolutionary purpose is gone. Can I still call myself a woman?

Chemo came for my hair with zero hesitation. I dutifully shaved it and promised to own the look. Purple wigs, temporary tattoos, fascinators, I put everything on my head. But no matter how much fun I had, or how grateful I was to have a nicely shaped dome, I still saw Mr. Clean whenever I looked in the mirror. So long, flirtation! No more hair flips, batting lashes, or arched brows. I was a bald, bloated, achy, unfuckable creature.

Last but not least, cancer came for what it really wanted. My breasts. The pain of deciding on a double mastectomy was excruciating. No cancer had been found in my right breast so I got to choose to take only the left or do a two-for-one special. I would have to trade the ability to feed my potential children for the hope that I would survive long enough to have them. I would lose all sensation in both breasts, furthering the desert wasteland of sexual dysfunction already swarming inside me. I would be cut and scarred for life. I would be me, but with not one part of me left unharmed. But I did it anyway.

So, here I am. A 32-year-old “Woman.” No breasts, no hair, no estrogen, no functional ovaries, no pheromones, no libido, no skinny jeans, no milk ducts, no supple erogenous zones, no self-lubrication, no period, and no cancer.

I did whatever it took. I fought harder for my health than I had ever imagined I would have to. I advocated for myself when my opinions were marginalized. I wrestled with the tough questions life gives you and even wrestled life itself. I’m a strong Woman who is expanding the definition every day, and I have my own list of criteria.

*Krysta Rodriguez can currently be seen in* NBC’s Trial & Error. *Previously, she starred in the second and final season of the musical drama* Smash. *Krysta has also starred in a number of Broadway musicals, including* Spring Awakening, First Date, The Addams Family, In the Heights, A Chorus Line, *and* Good Vibrations.