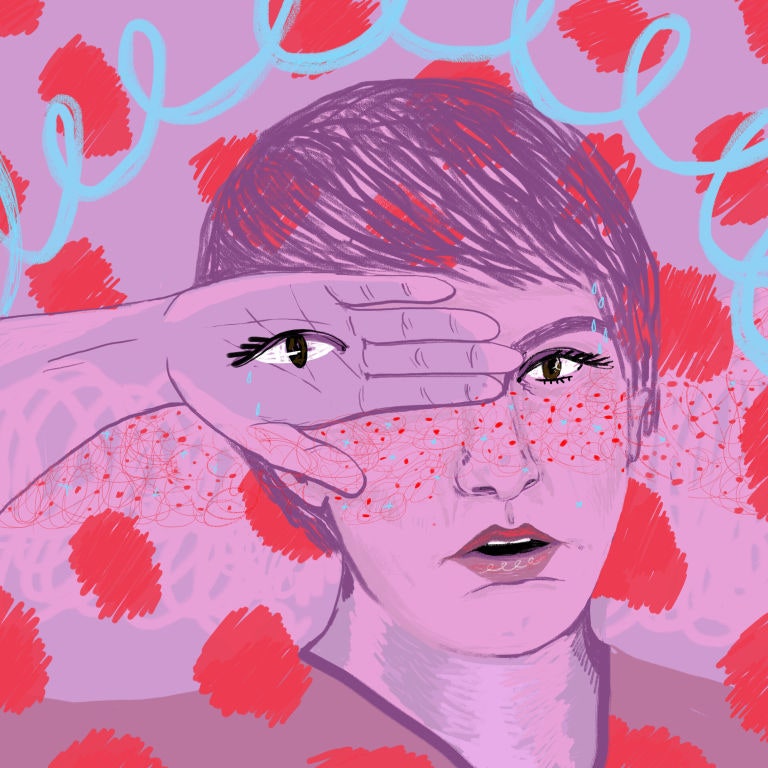 I really thought I never cared what I looked like. It’s not that I don’t have fun with style, with hair color, with fashion and frippery: I’ve embraced a spontaneous bleached bowl cut or an even more spontaneous array of meaningless tattoos. But the basics of bodily self-consciousness — being hyper-critical about my undulating belly, my wide ass, my off-white buck teeth, my whatever being too whatever — have mostly passed me by. Don’t get me wrong, I have plenty of horrifying qualities (codependency, pendulum moods, a propensity to call everyone “sweetie baby”), but in this one area, I’ve been granted some golden pass.

I held onto this preposterously high self-esteem even though, when I was a teenager, a solid effort was made to take this confidence right from me and cut me down to (sample) size, From the anonymous phone call junior year (“You’re fat and you deserve to die”) to the litany of images of perky teen princesses with a minimum of belly fat and a maximum of boob, the exact inverse of my proportions, it often felt like the world’s message was: “You are too messy, too much, spilling into space that isn’t yours. How dare you leave the house without trying harder?” In response I just went further, wearing miniskirts as crop tops and pearls as tiaras and ceasing entirely to brush my hair.

When my career started, it was like high school on terrible speed, each tweet (and even some cogent reviews of *Girls* by respectable critics) taking pains to point out the ways in which my body wasn’t TV-ready. But despite the vitriol and regularly fluctuating 30 pounds, I enjoyed a bright, beaming sense of self-love. Some of it came from the women who told me what I was doing mattered to them, women I’ll always feel grateful and connected to. But more of it came from looking in the mirror and being like “Damn, son.” As a member of a public couple, I laughed when I read comments like “He’s a rock star. Doesn’t he know he could date a model?” Because they didn’t know my secret: I AM a model. As Jenni so elegantly puts it, I am Rihanna to myself.

But chronic illness — endometriosis, along with an accompanying autoimmune disease that gives me chronic joint pain and fatigue — has made my body far less predictable to me, and in far more frightening ways than whether I’ll wake up able to fit into my high-waisted jeans. And a few weeks ago, a course of steroids to treat a massive flare of joint pain and instability led to rosacea’s appearing overnight, making me look like a scary Victorian doll, two perfect pink circles painted on her porcelain face. “It’s actually pretty cute,” my mom said. “Very ’90s editorial fashion!”

Then, after a long, sweaty night shoot in which I was covered in strange makeup, I washed my face to reveal that the rosacea had become hundreds of tiny pimple-blisters that covered me from forehead to neck. The sound that came from that hair and makeup trailer was similar to when the bitch in the Craft starts losing her hair in the locker room. Terror, rage, and piteous sadness. My face burned, but not as badly as my pride.

Now, let’s back up a moment. I had pimples as a teenager. A bunch of ’em, enough that I used Proactiv (probably once a week) and slathered my face in Wet n Wild concealer. After my first camera test for Girls, a producer gently pointed out we’d need to do some visual effects work to cover an angry red zit. I hadn’t even noticed. For my 24th birthday, Jenni introduced me to Terri Lawton, a woman we call “the face witch” because of her incredible ability to discern and cure all skin ailments, and most emotional ones too. She promptly handled my acne, and I got compliments left and right on my pure, blemish-free skin. I appreciated it, but at the time, I hadn’t been particularly shaken by my other reality.

But I got used to having good skin over the years. Showing up to photo shoots and being told, “You barely need any makeup at all!” Having other women ask my secret (maybe she’s born with it, maybe it’s Terri Lawton.) Gradually I got lazy about my products, but my skin remained dreamy, even through hormone fluctuations, new medications, and daily, sweaty on-set makeup wear. Sometimes I forgot to wash my face, and I still glowed. It started to feel like a superpower.

Until I found myself 31 and hysterical, in the dermatologist’s chair as she extracted infected areas, applied an antibiotic cream, and explained that rosacea is another chronic condition: once the cat’s out of the bag, there’s no guarantee she’s headed back in. The acne on my shoulders and back was also steroid induced, she explained. (I hadn’t even noticed the bacne yet. FML.)

I took the news hard, requiring massive text support. I sent Jenni pictures from every angle. I wept in a Lyft clutching my bag of face wash and anti-reddening cream. I told everyone who encountered me over the next few days what had happened, even as Jack swore up and down it was only noticeable if I aggressively pointed at each red-ringed bump. I screamed from the bathroom. “And to think, I just cut off all my fucking hair!”

There are lots of ways I could explain my reaction: Every time chronic illness presents a new and surprising side effect, it’s a reminder of what your body won’t give you — ease. The word rosacea is also terrible to say. Plus, my face felt like someone had given it a nice, slow sandpaper massage by candlelight.

But I had to conclude it was none of these: I had finally found my vanity. Seven years of being treated in the public eye like a punch line about female imperfection may not have felt like it was wearing me down, but it had actually forced me to rely emotionally on my one area of fully conventional beauty: my perfect fucking skin. They could tag me in a picture of a beached whale. They could call me a bag of cottage cheese. But they couldn’t take away the fact that I was able to eat seven slices of pizza, a wine spritzer, and three quarters of a chocolate cake and still look like my face was kissed by sweet, sweet angels when I woke up. I wasn’t just mourning my easy skin-care routine or my “No filter? No problem” lifestyle. I was mourning a life raft that had kept me, silly as it was, bobbing above the fray.

I have no idea yet what will happen on this “rosacea journey.” My handbag is full of creams and potions, my tummy full of antibiotics and probiotics. I’m going to be swatch-testing foundations and concealers on the regs like an old-time diva (and I’ll probably throw in a satin house turban for good measure). But I have been forced to finally mourn the long, slow hit on my self-image. I thought my adolescent attitude, the take-no-prisoners approach to my own look and form, could carry me through the onslaught of critical attention. I thought I could intellectualize it away. But I can’t.

What scares me most is that female celebrities with access to skin witches are not the primary targets of this kind of relentless hatred. We’ve got the resources to deal in every possible way. But there are millions of teenagers applying the entirety of their time, resources, and wit to attacking classmates in painfully inventive ways. I’m starting to believe that speaking this pain aloud isn’t just good for my own healing: it allows any young woman who might be watching to understand that nobody is immune from feeling bad about hateful attention.

If it took spelling my pain across my face to admit it, then so be it. I’m oddly grateful. “I don’t give a shit” only translates into isolation; it prevents the people who love you from reaching out their hand to remind you of what’s real. In the few days after the initial breakout, this cloying kids’ song played over and over in my head: *”I love myself / I think I’m grand / At the movies, I hold my hand / Ask myself out on a date / When I get there, I’m always late / I’m a nut, tee-hee / I’m a nut, tee-hee / I’m a nut, I’m a nut, I’m a nut …”*

I love myself. I think I’m grand. I hear the voices of the Internet when I get dressed. I have a bunch of blister-pimples. All are true. All are fine. None are forever. I promise you.

*Lena Dunham can’t believe you have to wash your face twice a day. Insane!*