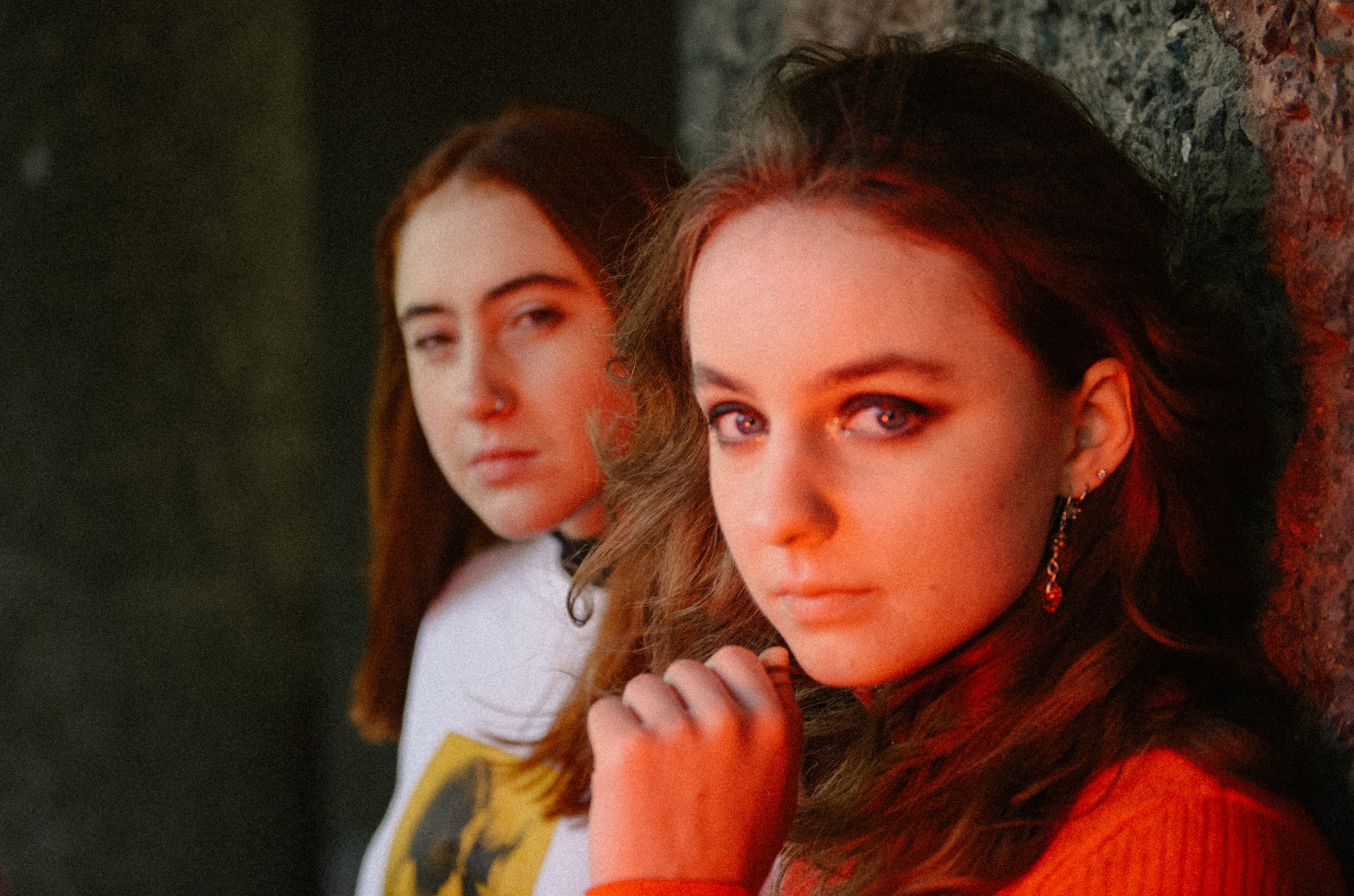 Moving away from home is a big moment in any young person’s life, but for the members of Let’s Eat Grandma (named for a grammar joke — add a comma between eat and Grandma and see how the meaning changes), it’s been one of many highlights since the release of their 2016 album, *I, Gemini*, including graduating from high school, their first romantic relationships, and, now, releasing their sophomore album, *I’m All Ears*. “Writing an album is one of the best ways of processing it,” says Walton.

Hollingworth and Walton’s relationship began at four, when the friends bonded over a sketch of a hot-pink elephant at their nursery school’s drawing table — a mutual admiration for each other’s work that they both say is still present today. Music came shortly after; by the time Hollingworth and Walton were 13, early versions of Let’s Eat Grandma were gigging around Norwich, and they eventually signed their first record deal with Transgressive. If their lockstep, haunted freak folk seemed to be a product of two people who could read each other’s minds, that’s because it basically was: Walton and Hollingworth say it’s almost the case, both onstage and off.

“Friendship when you’ve grown up with someone, it’s a whole different thing,” says Walton. “You know why they’re doing the things they do.”

“You understand someone’s past,” Hollingworth says, effortlessly finishing her friend’s comment. “You understand more where personality traits come from, and you’re not quite as judgmental.”

Hollingworth and Walton punctuate that statement with a laugh, as if there had been a time in their friendship, like in any relationship, when they hadn’t been quite so forgiving. But one would be forgiven for thinking Let’s Eat Grandma has experienced nothing but perfect synchronicity. During the marketing for their first album, Walton and Hollingworth presented themselves as unblinking clones — serious-faced young women with long blonde hair, equally capable of creating trippy freak folk and playing patty-cake onstage. When a video of them in Stevie Nicks–esque long dresses and cloaks emerged, they played into the image, jokingly telling journalists they were witches who could cast spells—a rumor that, they discovered with no small joy, quickly spread. Even now that they’ve dropped the marketing ruse, they still find themselves gently correcting those who believe they’re twins. Having been introduced to so many people on tour, Hollingworth understands the confusion.

“I think when you don’t know somebody or you just meet them, you often go by hair color and skin color,” she says. “Basic features that have to do with your hair or your eyes or your skin. Therefore, Rosa and I are similar in that respect, even though we have different eye colors; people think we look the same.”

With *I’m All Ears*, Let’s Eat Grandma fully leans into the strengths of its two members. Breaking from the lockstep vocals of their debut, Hollingworth and Walton instead embellish their dense layer-heavy pop with field recordings, including a Nokia cell phone’s ringtone on “Hot Pink,” rain on “Ava,” and—fittingly—a studio cat licking the microphone and purring on “The Cat’s Pyjamas.”

It’s also a breathtakingly honest release. Co-produced with SOPHIE and the Horrors’ Faris Badwan, the lead single, “Hot Pink,” is a clattering meditation on how simply being a young woman moving through life means dealing with a string of constant emotional attacks. (“Fill my head with shame / ’cause you need someone to blame / I’m just an object of disdain to you.”) Storms of both the watery and emotional variety weave through the album, with lines like “I try to excavate the feelings but they stay in,” on “I Will Be Waiting,” hinting at someone desperate to find a way to rise above the fray.

“Some people say the album sounds like people trying to grow into strong women,” says Hollingworth. “Doing great things as women and still struggling with it. It feels like that. I really feel like that was a good analysis.”

The response from fans has been strong. In addition to an upcoming opening slot for CHVRCHES, Let’s Eat Grandma recently snagged a coveted (1) ranking from Pitchfork for *I’m All Ears*. But for the most part, Walton and Hollingworth are simply thrilled that they’re no longer regarded as a novelty act. It’s been a long game of catch-up, but the music world is seeing Let’s Eat Grandma the same way they see themselves — as musicians.

“The press is writing about us in a more respectful way than they did before, for sure,” says Walton. “That’s something we struggled with in the last reviews. Even if they were compliments, they’d be delivered in a sort of backhanded way: ‘Oh! Very good for two young girls.’”

Hollingworth agrees, noting that maybe social attitudes have changed. Teenage girls are making music, even when they’re not receiving international attention. With any luck, Let’s Eat Grandma has cleared the way for other bands to get their due.

“I think it’s not just because we’re more accomplished,” says Hollingsworth. “Hopefully it’s because things are generally beginning to change. When we first started, definitely felt worse. It feels like a lot has changed over those last six years.”