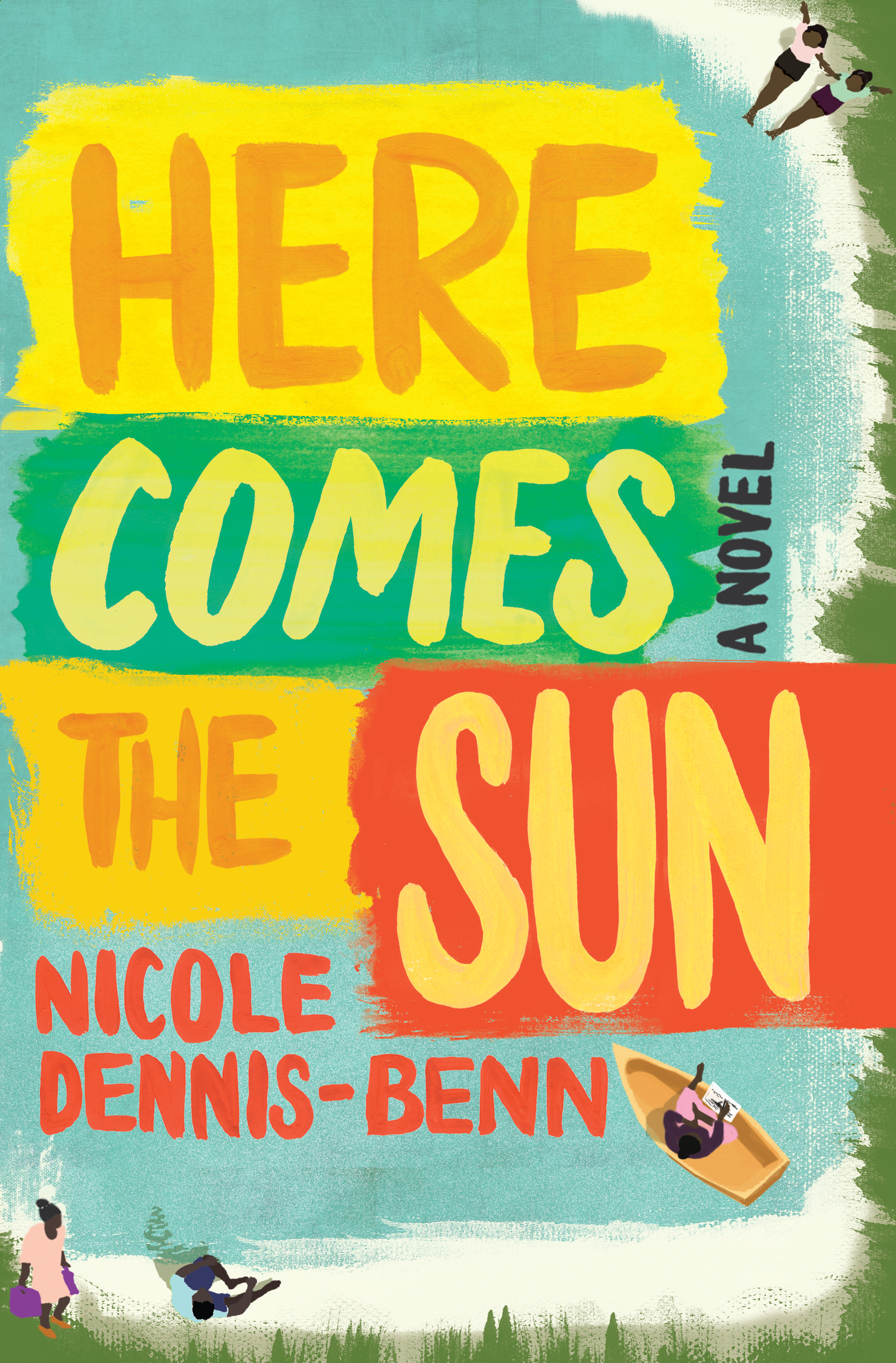 ​Thandi sits naked inside Miss Ruby’s old shack on a bench. The shack is made of zinc and wooden planks, the exposed nails rusted from the open air that enters from the sea. A leaning mango tree rests on the roof from Hurricane Gilbert, giving shade from the sunlight and protection from potential voyeurs. Black mangoes dangle inside, some of them rotting with dried seeds. Every so often the sea breeze whispers something against the zinc roof or the gaping windows, leaving behind a salty breath that Thandi can taste on her lips. It’s mid-February, but the humidity and drought they’ve been experiencing make it feel like the dry, hot months of summer. Thandi’s back is hunched and her shoulders rounded. Tiny ants crawl on the dusty ground, a few making their way up the bench. She crosses and uncrosses her legs, fearing they might crawl into the mouth of her vagina. Across from her, Miss Ruby combines creams together, squeezing them inside a big white jar that used to contain hair-straightening cream. The woman expertly mixes the concoction with the tail of a metal comb, her tongue stuck between her big pink lips as she furrows her eyebrows in deep concentration. She never breaks a sweat in the overbearing heat, though she wears a hooded sweatshirt that covers her forehead and arms to prevent burning from the sun. A pair of loose-fitting pants covers her legs.

“Yuh have the Queen of Pearl?” Miss Ruby asks. Thandi nods and hands it to her. “I don’t want it now. Yuh should use it daily. Not dat it’s any strongah than my concoction. But if yuh use dem together, yuh g’wan frighten fi see how it wuk miracle. Yuh mus’ be careful same way,” Miss Ruby says to Thandi. “How is school?”

“Fine,” Thandi says in a voice as small as the ants crawling on the floor. She puts the Queen of Pearl crème back inside her schoolbag.

Thandi shrugs. “I guess so.”

Thandi’s entire high school career has been spent preparing for this one exam from the Caribbean Examination Council for nine subjects. All except one was chosen for her.

> All except one was chosen for her.​

“You guess?” Miss Ruby puts her hands on her hips. “Yuh betta be. It’s in four months, no? That’s a big, big deal. My cousin in Kingston fail five subjects last year an’ did haffi tek them ovah. Anothah girl end up dropping out an’ going to vocational school fi learn a trade. You is yuh mother’s only hope. Yuh know how hard she wuk fi send you to dat school?” It’s true. Delores cheats tourists out of their money with cheap souvenirs she sells for triple the price in Falmouth Market, and Margot works long hours at the hotel. They do it for her.

Thandi swallows, looking down at her uniform piled on the floor like a rumpled sheet. It used to give her a sense of pride, but at this very moment, as she stares at it, she considers the other uses one could make of the white material that costs more than groceries for a month. Because of the expense, Thandi only owns two sets of uniforms, washing them by hand every evening after school, then ironing them for the next day.

She looks down at her brown thighs. They haven’t changed a bit since her last visit. “Do you think I can get light in four months?” she asks Miss Ruby, thinking of the party and the boys who will be there.

> She looks down at her brown thighs. They haven’t changed a bit since her last visit. ​

“You took the plastic off,” Miss Ruby says, a tinge of accusation in her voice.

“It was too hot,” Thandi tells her. “I felt like I was going to pass out.”

“I used to be black like you, but now look at me . . .” Miss Ruby turns her head from side to side for Thandi to see her salmon-colored skin, delicate with the texture of scalded milk. “See how bright my skin come? If yuh follow instructions yours will get this way quicker. Now dat yuh ‘ave di Queen of Pearl, yuh might be lucky. If yuh want faster results, use it twice ah day.”

She rubs the concoction up and down Thandi’s neck, back, arms, and shoulders. She rubs everywhere but her butt crack. Miss Ruby is hardly tender. Thandi wonders if Miss Ruby’s roughness is punishment for not having followed her earlier instructions. She imagines her blackness peeling off, the hydrogen peroxide Miss Ruby pours into the mixture acting like an abrasive, a medicine for her melancholy. She closes her eyes as the warm formula touches her skin. Miss Ruby works her way to Thandi’s chest. The circular motion of a stranger’s hands on her breasts makes Thandi blush. She has never been touched this way. She opens her eyes and searches for something—anything—that can take her mind off the sensation of this strange woman’s fingers. She imagines herself as a fish Miss Ruby rubs down with salt and vinegar before frying. Her eyes find the ceiling. Had she been able to lift her arm, she would trace the things she sees projected from her mind.

> Had she been able to lift her arm, she would trace the things she sees projected from her mind.​

“I don’t know,” Thandi says, still staring up at the planks in the ceiling. “Never met him.”

“*Tsk, tsk*. Well, God played a cruel joke on you. Because, chile, if yuh skin was as pretty as yuh hair, you’d be one gorgeous woman.”

Miss Ruby isn’t saying anything Thandi hasn’t heard before. Her mother says the same thing, often shaking her head the way she does over burned food that has to go to waste. “I*t’s a pity yuh neva have skin like yuh daddy.*” Thandi is neither the nutmeg-brown that makes Margot an honorable mistress—a rung lower than a bright-skinned wife—nor is she black like Delores, whose skin makes people sympathetic when they see her. “*Who want to be black like dat in dis place?*” Miss Ruby once said to Thandi about her mother.

Miss Ruby gives Thandi the homemade mixture in the jar for her to apply as needed. “Only as needed,” she stresses. “These are very strong chemicals that could kill yuh.” She then reaches for the Saran Wrap and begins to wrap Thandi’s arms and torso. A mummified Thandi sits and listens to Miss Ruby’s instructions:

“If yuh waan come quicker, leave on the plastic. Don’t wash. Don’t go in the sun. If yuh haffi go in the sun fah whateva reason, mek sure seh yuh covah up at all times from head to toe. If yuh start to feel like yuh g’wan faint, jus’ drink wata. It mek yuh sweat more. Whatevah yuh do, nuh tek off the plastic. An’ remembah, stay outta that sun!”

Miss Ruby repeats these words like an ominous warning, her eyes pouring into Thandi’s. Thandi listens and nods, though she wants to rip the Saran Wrap off and jump in the river. She imagines her skin boiling, becoming molten liquid underneath the plastic wrap.

> She imagines her skin boiling, becoming molten liquid underneath the plastic wrap.​

“Do I have to wear this all the time?” Thandi asks.

“Heat an’ sweat is yuh advantage. Jus’ bear it,” Miss Ruby says, stamping her with a look.

Thandi regrets saying anything, sensing her complaint might be interpreted as her wanting less out of life. Less opportunity. Less chance of attracting the type of boys her mother and sister want her to attract (the type who will be at the party for sure). Less chance of acceptance in school. Less chance to flunk school—the only ship on which black girls like her could float, given that their looks will never do it for them. Her mother tells her this too. “*Di only thing yuh have going for you is yuh education. Don’t ruin it.*” Meanwhile, the unintelligent “brownins” in school end up with modeling contracts, or with boyfriends with money they can spend on them. The less attractive ones get good jobs in their family businesses. What else does she have to fall back on if she fails the exam, besides her drawings? But no one wants those. No one respects an artist. So when Thandi puts her clothes on, she pretends to ignore the crinkling of the plastic under her uniform and the nausea that comes over her.

Miss Ruby examines her skin, her eyes like a sharp razor raking over Thandi’s body as though looking for areas she might have missed—dark patches that need to be rubbed, scrubbed down with the rigor of someone scouring the bottom of a burnt pot. Or the way she used to scale fish. Her dark eyes have in them a subtle hostility that reminds Thandi of the way the girls and nuns at school look at her. Can she tell Thandi doesn’t belong? Can she sniff her deceit? Perhaps in that moment Thandi reminds her of someone who did her wrong. Or of herself—the way she looked before she bleached her skin. How suddenly her mood changes once Thandi pays her the money.

“Remembah to stay outta the sun like ah tell yuh,” Miss Ruby says. “‘Cause you and I both know, God nuh like ugly.”

*Nicole Dennis-Benn was born and raised in Kingston, Jamaica. She is a graduate of Cornell University and has an MFA from Sarah Lawrence College. She has received fellowships from Hedgebrook, MacDowell, Lambda, and the Sewanee Writers Conference. She lives with her wife in Brooklyn, New York, where she teaches writing.*