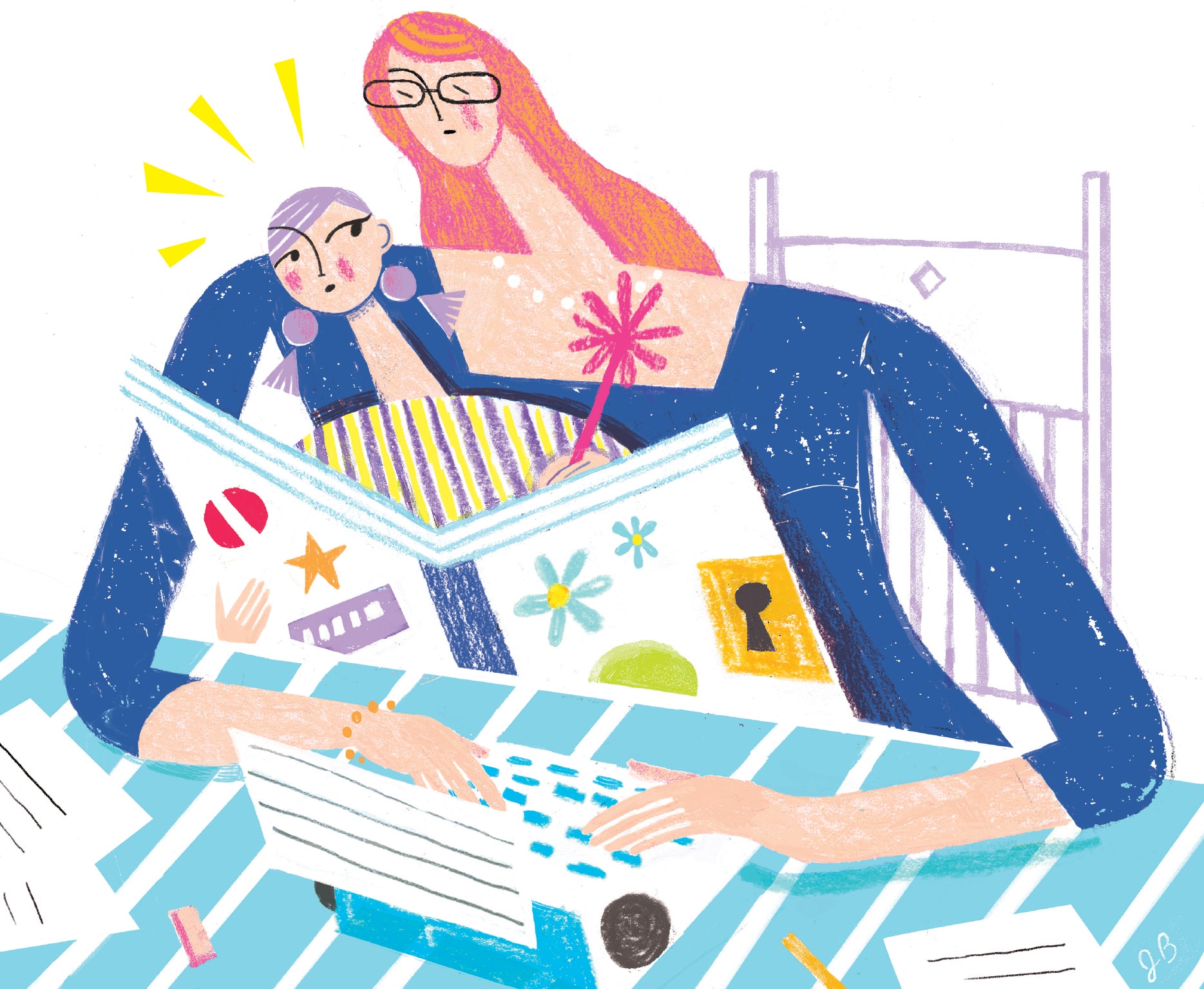 ​”How do you feel about being depicted the way you are in this book?” I paused. I was confused. I was on the phone with a reporter whom my mother had asked me to speak to. The reporter was doing a big piece on Mom’s newest novel for a big newspaper.

“Why should I feel anything?” I responded, and then I realized (via a quick Google search) what she was referring to. In my mother’s newest novel, there was an adult daughter roughly my age who gets inpatient treatment at Hazelden in Center City, Minnesota. If the story has a familiar ring, it’s because it really happened. I myself completed a monthlong residential-rehab program there, in 1997. Now, at 37, I’ve been sober 18 years, and I have three kids of my own — all of whom are old enough to read. I stammered at the reporter. I wondered why my mother had given me no hint that perhaps the reason this reporter was so incredibly keen to speak to me was because I was in the book. I felt furious, embarrassed, enraged, and, of course, exploited. As friends expressed concern for me, I found myself having to explain my sobriety to people who didn’t even know I had ever had a problem, since I’ve never had a legal drink.

This wasn’t the first time this had happened. It was very much the occupational hazard of being the daughter of popular author Erica (2) Jong. But this time it was infinitely more annoying.

> It was very much the occupational hazard of being the daughter of popular author Erica *FEAR OF FLYING* Jong.

It first dawned on me that my mother was chronicling my every move via her autobiographical fiction when we were eating in a fondue restaurant called Ships in Connecticut in 1990. I was a rotund 12-year-old who believed that my perm made me look like a young Shelly Long. I wore scrunchie socks, and they pooled at the ankle for seemingly no reason. My shoulder-padded mother had just published a novel that told the story of a world-famous folk singer with whom she shared many similarities, including voluminous hair, a drinking problem, and motherhood issues (though the folk singer had twin daughters my age).

A woman approached who was also puffed up like a linebacker, with wads of polyester sticking out of her jacket. “May I?”

My mother invited her to join us. The woman gleefully recounted the story of a painful divorce and a young lover who had ended up liberating her from the bonds of domestic oppression. My mother nodded. She knew what the woman was talking about because both she and her novel’s protagonist had been though the same experience. After Mom gave this stranger permission to go off and live the life she had always dreamed of, the two women hugged. I wasn’t really listening. I had dropped a piece of brownie into the fondue pot and was doing my damndest to save it. But as the woman was leaving, she looked at me.

“You are just adorable,” she squealed, and then she started to sound almost disappointed. “But you’re not twins! You don’t have a twin, do you?” She seemed almost irritated at my single status.

No, I did not have a twin. If I did, I could call her and we could commiserate about how invasive it is to have your mother reveal your secrets to the world. This, and other slights real and imagined, caused me to vow to be the mother whom my mom was too busy earning a living to be.

In that moment, I promised myself I would give my children the stable childhood that I both longed for and lived in mortal fear of. My children would have bedtimes, routines, and healthy organic meals that did not include ice cream. I would parent the hell out of those kids.

Sure, my circumstances were significantly easier than my mother’s. My mother’s marriage to my father disintegrated soon after I was born. She became the breadwinner and she found herself touring often to support her books. She sometimes struggled to support us.

So after years of watching my mother struggle and suffer, I did the only reasonable thing and I also became a writer. I kicked off my career at age 21 with an autobiographical novel about my time in rehab, * (1)*. Then I became less comfortable extruding my life into novels, mostly because I married into a very different kind of family, a family of civilians. I came from a family of artists and writers who forgave exposure in the name of art. I wanted to protect my husband, and honestly, a usual domestic life is pretty boring. I found lots of things to write about that were not myself. I eventually became involved in writing historical novels.

And though I had written autobiographically, I thought I had escaped the possibility of exploiting my children the way I had been exploited. So I was safe. Or I thought I was. And then along came social media. It seemed harmless. All my friends had Instagram and loved it. It started with a few photos of my adorable children acting adorably, but the problem was I bristled at the self-aggrandizing nature of social media. It felt doubly necessary to poke fun due to the fact that most people created an Internet life that was as glossy as *Vogue* Magazine. No one ever posted a picture of a kid crying or a floor covered in vomit. By that point, I knew parenthood, and it involved a lot of crying and a lot of vomit (often at the same time). I didn’t want to tell the world how great I was. I wanted to tell them (or my 2,000 or so followers) the truth.

But around the time I got the phone call from that reporter about my appearance in my mother’s latest novel, I took a deeper look at my Instagram feed. Scrolling down my page, I saw pictures I’d posted of my kids’ foibles. On Instagram was a shot of my son eating Skittles for breakfast, accompanied by the hashtag #parentingforthewin. There was a series of my kids destroying my living room during Christmas break. I tried to post amusing comments, but the problem was there was no way to ask my children for permission, and even if I did, a seven-year-old isn’t capable of understanding the question.

As infuriating as it was to be my mother’s material, as I noticed our similarities, I started acknowledging how many opportunities presented by *her* financial success I’d received. I went to private schools, traveled, and met fascinating people, including agents and editors who helped launch my career. Furthermore, like the photographer Sally Mann, my mother used a subject who was close to her. I believe (especially when I’m not involved) that the label of exploitation, when given to women writing about their children, is vaguely misogynistic.

It was also liberating having a mother who always spoke her mind and insisted I be honest too. As a child, I told people what I thought. Mom wrote novels about her life. In interviews, she’d talk about politics, sex, her divorces. She didn’t care about looking good, making friends, or ingratiating herself to various people who could have helped her. She had a kamikaze obsession with the truth.

“But what about my truth?” I complained to my shrink, my husband, and my friends about my mother’s exploitation of my teenage substance issues. But ultimately I realized I couldn’t be mad at her because in some ways I was doing the same thing. If anything, what I did was more questionable, because she wrote under the veil of fiction; I was documenting my life. She was making a living while I was just amusing my friends. Of course there were differences: My Instagram was seen by hundreds, and her books were read by millions. She was shaping the culture; I was making fun of my children’s obsession with *Star Wars*. What I was doing wasn’t so different than what all my friends were doing; the culture had shifted, and it was no longer taboo to expose your children to the world. But the reality was that even if there were nuanced differences, it would be hideously hypocritical to fault her for writing about me.

A few months after the book came out, we were waiting on line at Starbucks. I asked Mom why she didn’t tell me about my fictitious avatar.

She paused and looked at me in an inquisitive way. “But I didn’t write anything mean about you.”

I wanted to say that wasn’t the point. I wanted to explain to her that I could have used a heads up before getting on the phone with the journalist, but it was pointless. As much as I wanted her to understand me, I knew that she could not. Perhaps it was that I was no longer the bohemian I had been raised to be. Perhaps I had gone too far over to the dark side of normalcy. But whatever it was, I had at that moment a choice. I could either fight with her or I could put my arms around her. And as I did it, as I hugged the little blonde woman, I realized I had forgotten how short she was. Her forehead came up to my chin. I kissed her forehead and prayed that someday my own daughter would forgive me the same as I had forgiven her.

*Molly Jong-Fast is the author of* Normal Girl *and* The Social Climber’s Handbook.