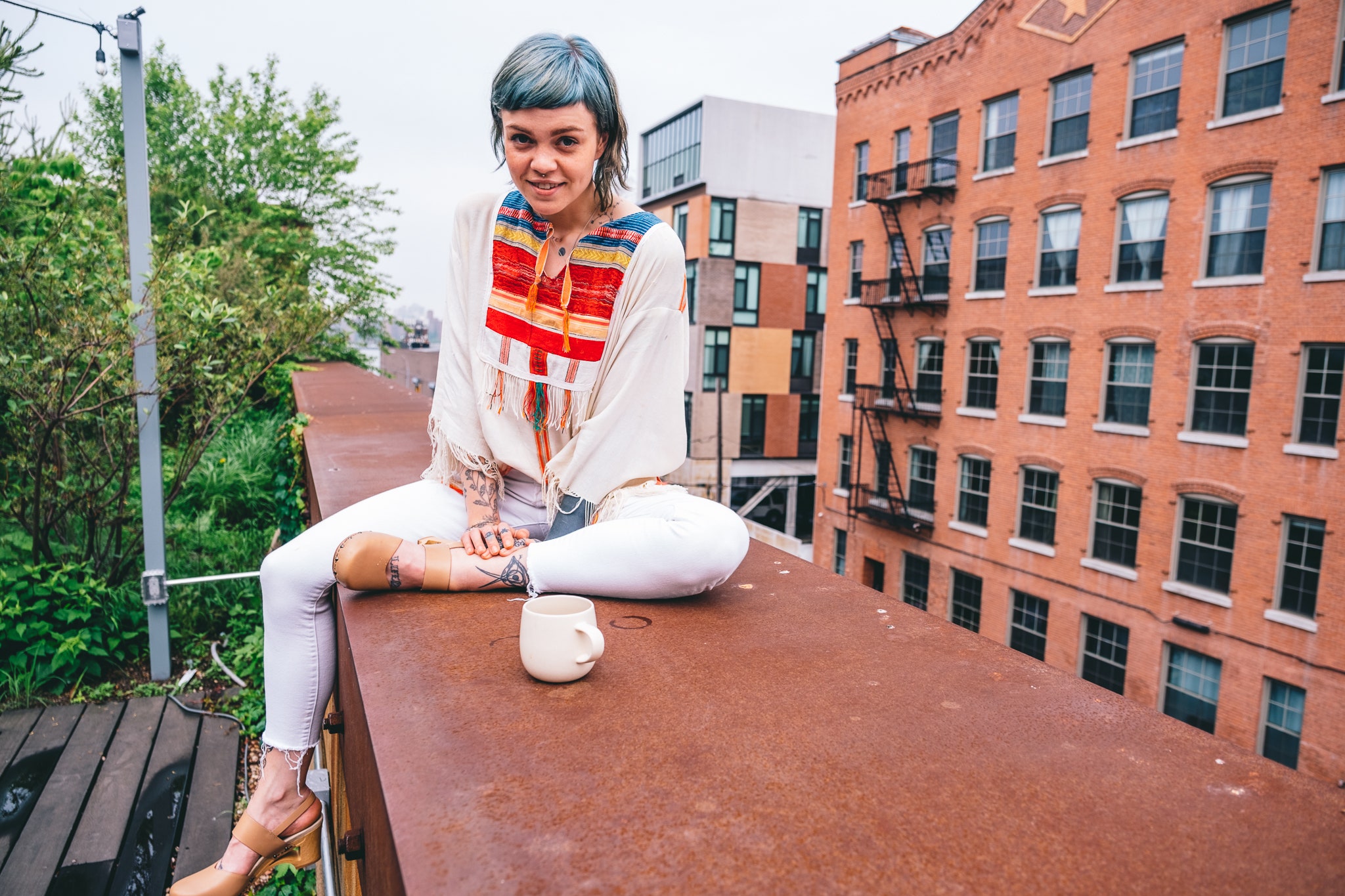 Meredith Graves has cycled through several careers. Most recently, there was her two-year stint as an MTV correspondent, where she would regularly pull stunts on the red carpet like interviewing celebrities’ children and accidentally became a meme during a Chance the Rapper interview when (1). Before that, from 2012 to 2016, she was the front woman of punk band Perfect Pussy, with which, thanks to the strength of their debut (and only) album *Say Yes to Love*, she screamed her way across stages around the world. She also worked gigs as a seamstress, writer, and head of her own label, Honor Press.

It’s probably why, when I ask the newly hired head of music at crowdfunding platform (2) if she’s OK with the idea of change, she laughs. It’s not an unkind response. At 31 years old, Graves has developed the unique ability to connect with any audience, weaving her way through questions more like a friendly conversation than a formal interview. Besides, after changing job titles every two years for the last decade or so, what else do you expect? Change is just about her only constant.

But it’s not simply about collecting experiences. If one thing becomes clear through conversation with Graves, it’s that she truly does believe in chasing ideas as far as they’ll go. The overarching theme of all her serendipitous projects? Using her amassed privilege to help others.

I caught up with Graves, who called me from the Kickstarter offices in Brooklyn to talk about finding your community, staying engaged, and why the job title on your business card tells only part of the story.

**Laura Studarus:** You’ve had so many job titles. How do you decide when it’s time for a change?

**Meredith Graves:** I just trust that when the feeling hits me, when I do find time to start looking, it will work out. I got real itchy in January. I was like, “Something is about to happen.” Before I knew it, I found out this job had opened up. The tweet that alerted me to the job posting, I saw it thirteen seconds after it was tweeted, and I had my CV in that night. It was the only job I applied to when I decided I was ready for a career change. So I waited until I got the feeling, and I was right.

**LS:** What attracted you to Kickstarter?

**MG:** A desire to simultaneously stay in music and keep working with artists and talking to them about what their lives are like, but wanting to get back to a place that felt a little closer to my own musical background. I had the best time at MTV. There’s not a bad thing about a job where, before you know it, you’re on a rapper’s Instagram because he’s making up a freestyle about you looking like the girl from the Wendy’s logo. That’s the coolest job that anyone can hope to have. I got the opportunity to learn about the interworking, both the successful parts and the failings, of the larger music industry from the artists themselves. So when this job opened up, it seemed like an extremely natural extension of that, because my goal all along, no matter what I’m doing and what part of the industry I’m in, is to help as many people as possible to the furthest extent that I can.

**LS:** Have you used Kickstarter for your own projects?

**MG:** No, I haven’t. Young people who come from punk or hard-core music scenes, we have a tendency to assume from moment one that we’ll be doing everything ourselves without even the help of the community that Kickstarter would bring around. These are community-built projects, even if they’re not people from all over on the Internet donating money, it’s still someone stopping at the grocery store and bringing stuff, another person showing up an hour early to run the door and make sure everyone pays so we can pay the touring band, someone else counting the money and paying out the touring band at the end of the night, and someone else finds them a place to stay.

**LS:** I loved the (3) you published when you got the job where you mentioned “keeping funding out of the hands of garbage people.” I know it’s early, but do you have any plans for tweaking the funding process?

**MG:** This is my thing with authenticity. It would not be me when, suddenly starting a new job, to decide that these were my ethics and try to build a game plan around them. I came into this job feeling prepared, because what I did in that open letter was tell the truth about how I felt. There’s no plan in there we haven’t seen yet, provided they read that open letter. That was me saying, “These are the changes I’m making.” When we make our sole position clear from moment one, the plan was to do that and see who comes around as a result of what they’ve heard.

**LS:** Do you have advice for the musician who is struggling and doesn’t believe that this kind of support is something they can draw from?

**MG:** I try to be really to be really aware of the privilege I have as a white, cis-passing, and sometimes straight-passing person. I also want to transform the language we use around the experiences of feminine-spectrum in music. My goal is to redistribute them to those who have been more marginalized for more far-out reasons than anything I could have come up against. I would challenge everyone to look at the music industry, both the parts that they like and the parts that are broken, and ask if public funding appears to them as a solution. Which may deal with them doing away with a lot of their mental stigma. If everything you’ve tried up until this point hasn’t worked, why be nervous now?

**LS:** Are there any projects you’re working on outside of Kickstarter you’d like to mention?

**MG:** I have just finished production and final approval on the new (4) record, which will be coming out as my contribution to Joyful Noise’s White Label Series in September. I also have a song on it that I produced and co-wrote.