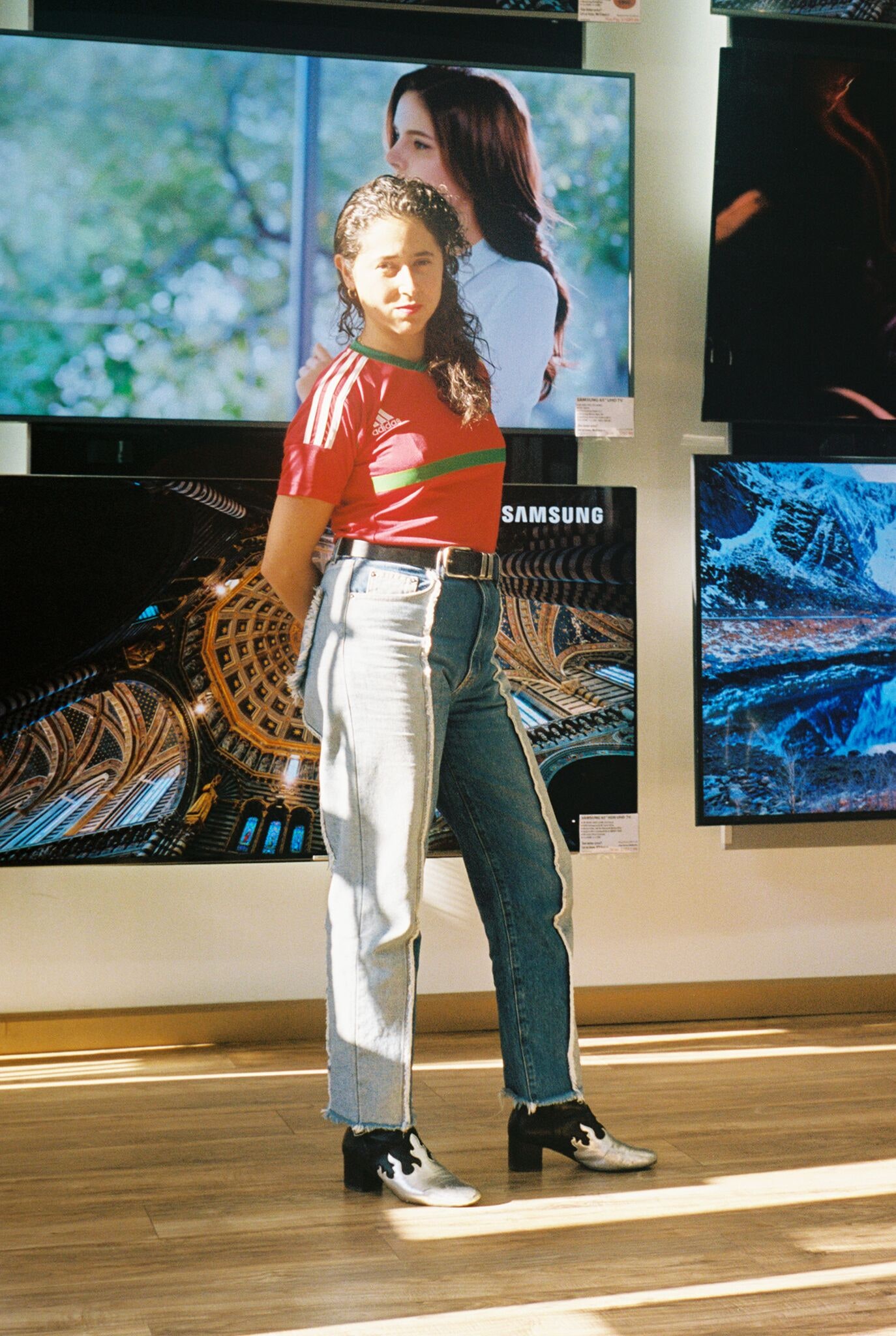 A group of men with instruments sit around a table and begin to play _Aita,_ a traditional Moroccan musical style. A young woman is at the center. She is singing when, suddenly, a digitized butterfly flutters out of her mouth. Several more follow until a flock of animated butterflies overtakes the scene.

This is (1)_,_ a film that follows two female performers of Aita — called _chikha_ — as they navigate intergenerational differences. It’s the latest work from Meriem Bennani, and it opened this month at (2) in New York. The Moroccan-born, Brooklyn-based artist is known for manipulating documentary-style footage with cartoons and parodied sound effects — it’s how her humor and awkward or isolated feelings from behind the camera manifest onscreen.

_Siham & Hafida_ joins a host of other projects where Meriem gazes at her home country’s traditions through a contemporary and humorous lens. Her 2016 film (3) — which was included in her first museum solo show, at MoMA PS1 — featured a computerized insect touring the Medina of Rabat and Fez and visiting private homes and celebrations, all while singing Rihanna’s “Kiss It Better.” One screen of the multi-channel installation showed a waterfall of digital icons including lipstick, the Maroc telecom logo, and the Lacoste crocodile.

Her fictional reality-TV show (4)_,_ about an absurdist hijab designer, also takes on contrasting ideas — this time between religious mores and internet culture. _Funjab,_ which was screened at London’s Saatchi gallery in 2015, spawned (5)_,_ a 30-second film that imagined Fardaous’s hijab designs for secular and Muslim holidays in America and was displayed to the public at Brooklyn’s Barclays Center in February.

The friction in Meriem’s work hinges on human behavior. While she creates her own character out of cartoon motifs, she also manipulates her subjects: as the women she films, who are sometimes her close relatives, open up to her, she might add a cloud of liquid over her face or pixels that emanate from the woman’s body. “You know, I registered for that app you told me about. Tinder or something,” one of her relatives says while a gurgling liquid distorts her features (this is part of _Ghariba,_ a film that showed at Art Dubai in March). The effects might make you question the reality of the films; they also add an extra layer to the many oppositional forces at play.

Between tradition and the next generation, women’s private behavior and public personas, Meriem’s work is a hyperreal study on the tensions of everyday life. Here, we talk about her artistic agenda, a search for the meaning of femininity, and her ever-present juxtapositions.

**Molly Elizalde:** How did you first become interested in chikha culture?

**Meriem Bennani:** Most people think that a chikha is a woman who dances to make money, lives in the nightlife — people are very judgmental around that. My first interest was in that figure of a woman who in some ways is very independent for making her money by dancing and using her body; she’s extremely eroticized and lives kind of isolated from society. But when I started doing research, I realized that the chikha are a completely different thing historically.

A chikha is a woman who sings Aita, a very technical genre of music. It’s a repertoire of songs sung in Moroccan dialect that talk about everyday life, heartbreak, and political issues, and the singing is really hard because it works in very specific rhythms and counting. People are very rigorous about Aita, so it’s not doing well with young people because you can’t bring in synthesizers or new technology.

Most people have these assumptions that chikha only dance in cabarets — that’s what popular culture made of it. But the chikha in their history and the lyrics are very feminist.

**ME:** What drew you to women as a subject in this film and your others, particularly (6)_,_ which focuses on the women in your family?

**MB:** Maybe this project is the most conscious where I could say “I want to give visibility to these women through my work.” But I really do not come from this consciously feminist or feminine-centered point of view. It started with looking at the people in my family that I was drawn to and revisiting the mythology I had around them as a kid — I realized that it’s all women.

They’re extremely feminine in the way that they carry themselves and dress, their makeup. Everything is an augmented version of itself. That’s a mystery to me, because I don’t really operate like that. They’re constantly in and out of a cartoon version of themselves. They’re full of subtleties. I grew up with that display of what femininity is but have completely redefined what it means to be feminine for myself.

There’s so much pressure on these women, how they have to exist visually in a social setting. Whenever I film them, the pressure around that is very visible on camera — of how they have to exist, the way they carry themselves — it completely reveals the expectations that society has on them. At the same time, the intimacy of me being a woman from their family filming them, they let go of these guards and destroy the trope they just created about themselves.

This is the most obvious, Psychology 101 thing, but I think through processing other people’s femininity, you are questioning yours. I’m trying to understand my own sexuality through the women that I’m related to.

**ME:** Your works act as a study of human behavior. How do tradition and the new generation come into play in your latest film?

**MB:** For me, the most striking generational difference is how women can use confidence to help themselves. Siham and Hafida both got hurt because they feel like they’re isolated from each other. They attack each other as a symptom of generational changes and shifts. Hafida, the older woman, says, “I had to learn the hard way from an older chikha, and she would make you go through hell.” It’s this idea that you have to suffer to learn. She says the younger woman learns from mixtapes and YouTube. She doesn’t know the technique.

But Hafida can’t read and write. She comes from a complete oral tradition, where everything is immediate. You listen to it, you sing it, and that’s your access. But the younger woman, Siham, _can_ read, and she’s empowered by it. She feels like she can make the genre progress.

She is fluent in personal technology and uses that to build a certain stardom around herself. She has an ambitious project to make videos of every song and write the lyrics so they’re finally transcribed on the Internet. She’s very aware of her power as a young person.

**ME:** Can you tell me about the desire to juxtapose documentary and cartoon?

**MB:** I’m really interested in storytelling. I see documentary as the rough material, like what you would use to make a collage. With the cartoon effect, I can manufacture emotions and tension and humor. I think that’s what documentary is anyways: people film a subject or situation, and then through the editing it’s completely artificial anyways.

I feel like I’m doing the same thing, but in such a hyper way that it feels less realistic, but it does point out the process of producing media today that is completely tailored around an agenda.

**MB:** I like that with the effects, you see someone and I play an effect on them, and part of you empathizes and connects with them at the moment of filming. You’re like, _You didn’t know something that I know now,_ which is that you would get this butterfly coming out of your mouth. And you’re wondering, _Are they victims of the effect? Or did they know what they were signing up for? Is Meriem an asshole?_

Most of the effects point at me behind the camera. It’s my reaction to the scene in a position that made me feel lonely or awkward. It’s my intervention on the documentary. It’s my character, the same way I can make a character out of the people I’m filming. My character is the monster of all the reactions.

**ME:** How do the women in your family react to the effects?

**MB:** I’ve filmed my aunt a lot, and I film my mother and my grandma, and they just know me so well that they don’t take anything personally. They know what they’re signing up for. But in _Ghariba,_ which is all portraits of women in my family, it was very intimate. We spent an afternoon to open up — it was almost too much for me to deal with because it’s people I usually see in a setting of polite small talk.

One woman, I showed her the video afterward. She had opened up about a story of her first love and a heartbreak she’s still feeling. She was very emotional, but then the crying effect made her laugh. So I think when it’s people I love, it’s clear that I don’t have bad intentions. They don’t take it the wrong way.

_Molly Elizalde is an associate editor at Lenny._